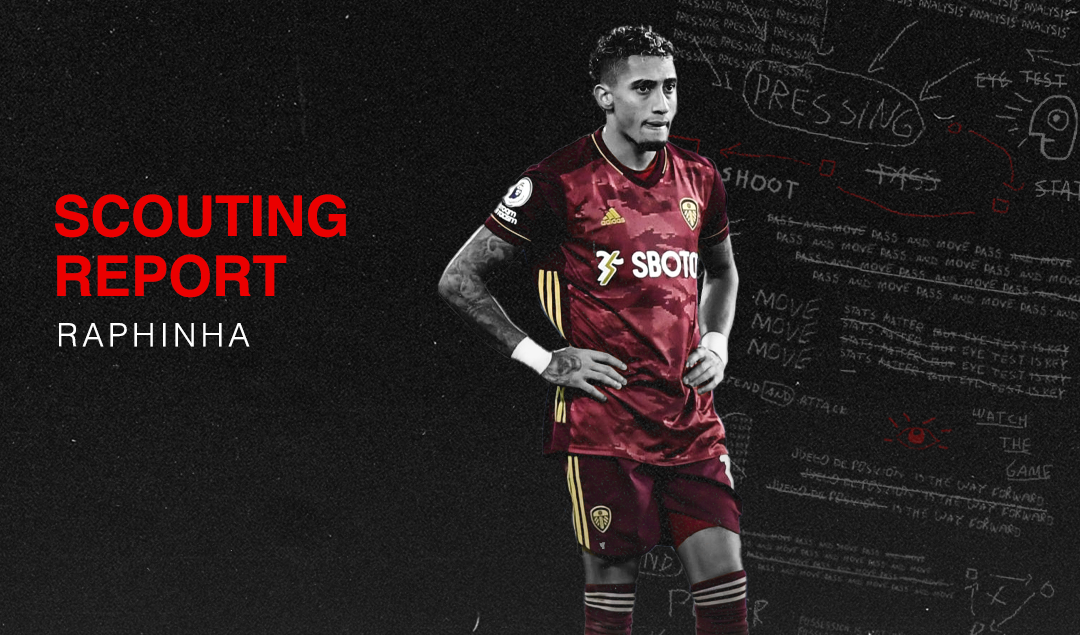 Just over four years ago, Leeds United’s Raphinha was plying his trade in the Brazilian second division. Born and raised in the south of Brazil, in the city of Porto Alegre, Raphael Dias Belloni would spend hours every day juggling the ball in the same streets as the man he idolised, Ronaldinho. Now, having moved to Portugal, France, and now England, Raphinha is starting to establish himself as Marcelo Bielsa’s new offensive weapon.

It was his idol’s former Barcelona teammate, Deco, that aided the skillful Brazilian’s career, signing him to his agency, D20Sports. After spending three and a half years playing in Portugal, scoring 24 Liga NOS goals by the age of 22, Raphinha was snapped up by Ligue 1 side, Rennes in 2019.

Rennes, renown for producing talents such as Ousmane Dembélé, Abdoulaye Doucouré and Eduardo Camavinga, signed the Brazilian for €21 million, making him their record signing. Rennes president, Olivier Létang described the signing as “the biggest transfer in the modern history of the Stade Rennais.”

The Brazilian continued to impress during his time in France, netting eight goals and providing seven assists, helping Julien Stéphan’s side qualify for the Champions League for the first time in their history. However, surprisingly the club was willing to let go of the winger when Leeds came looking for his services. Raphinha, “feeling undervalued,” departed to Yorkshire for £17 million, whilst Rennes replaced him with 18-year-old Jérémy Doku, from Anderlecht.

Many have compared Raphinha’s role in the Leeds setup with that of teammate, Pablo Hernández, who mainly operated as the enganche last season. Hernández’s 18 goal contributions last season were pivotal in The Whites’ return to the Premier League, embedding his name in Elland Road folklore. However, the Spaniard has only featured 10 times in the league this season, with just two goal involvements. At 35 years old, Hernández’s better days are most likely behind him and many have speculated that Bielsa is implementing Raphinha as his new enganche.

However, it seems Bielsa intends to deploy Raphinha as his new right inside winger – the role formerly carried out by Hélder Costa. Leeds use the right-hand side for 40-50% of their attacks, with the right back (Luke Ayling) pushing forward creating an overload down this side. With Ayling higher up, it allows Raphinha to drift inside into the right half-space, with Ayling overlapping out wide.

In this area, the Brazilian is a huge threat and can make things happen. He isn’t afraid to take a shot with his menacing left foot, as showcased against West Brom in their 5-0 victory at The Hawthorns in December. He also has the capability to pick out a clever pass through to a teammate, averaging 1.9 chances created per 90 and assisting 4 goals during his time at Elland Road so far. His ability to apply finesse to his strikes and passes have particularly caught the eye. 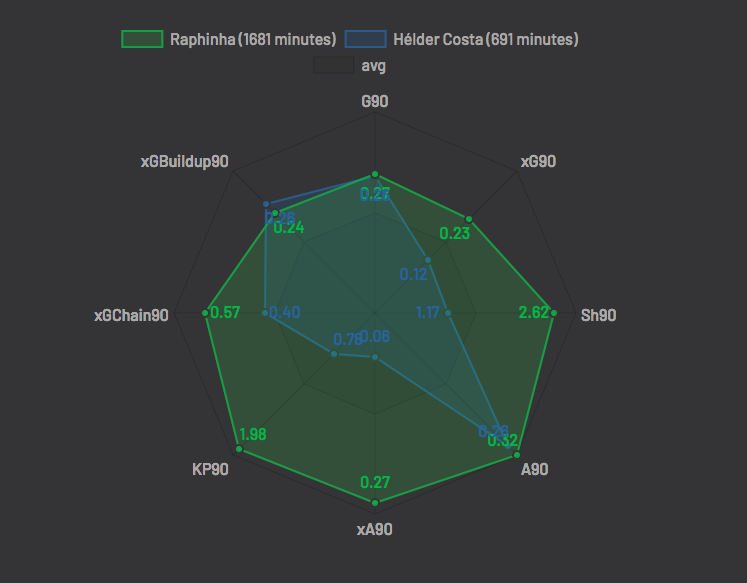 As can be seen in the chart above, Raphinha is clearly providing greater attacking output than his Portuguese counterpart this season, especially creatively. Since displacing Costa in the Leeds team, Raphinha has averaged 0.27 expected assists per 90, whilst Costa was producing 0.06. Furthermore, whilst averaging similar goalscoring output, Costa averages 0.78 key passes per 90 whilst Raphinha boasts an impressive 1.98.

Much like the left winger on the opposite side, Jack Harrison, Raphinha offers an abundance of pace and dynamism, capable of threatening any defender he comes up against. The tricky Brazilian has already hit the net four times for The Peacocks in the Premier League and he’s just getting started in West Yorkshire.

Since his first start against Arsenal, Raphinha has looked increasingly dangerous going forward and gives Leeds another dimension offensively. His showboating skill moves are easy on the eye and have had the likes of Gary Cahill chasing shadows. He is quickly gaining plenty of fandom from Premier League viewers.

Already compared to Ángel Di María by his teammate, Patrick Bamford, it’s obvious he’s an aesthetically exciting player to watch and it’s clear the 24-year-old has a high ceiling. His creativity and superb turn of pace have allowed him to solidify himself into Bielsa’s side as they push for a top-half finish. Expect to see plenty more viral clips of him claiming the ankles of opposing defenders throughout his career at Elland Road.