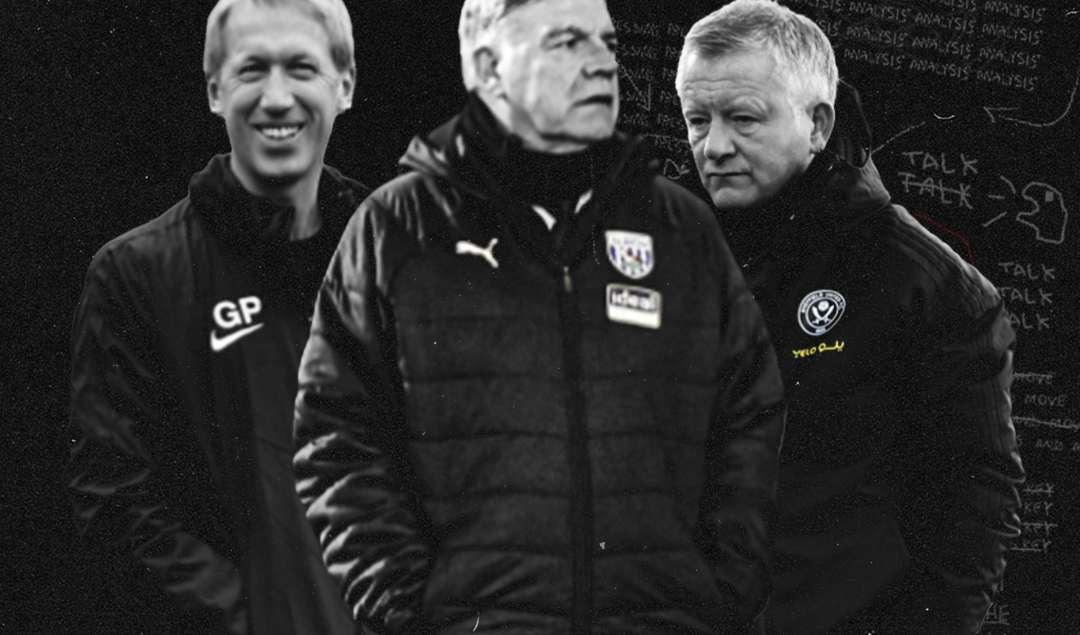 This is the final part of my three-part series analyzing the different Premier League Squads before the January Window. You can read Part 1 here and Part 2 here.

Arsenal’s season so far has been quite disappointing, to say the least. After an impressive start to the season, the Gunners have struggled for form and have not won any of their last 7 league games (at the time of writing). Manager Mikel Arteta has struggled to find the right combination of players and has used 23 players in the league so far this season, with goalkeeper Bernd Leno the only player to have played every minute of the season so far.

The struggle to find the back of the net does not seem to have reduced the playing time of captain Pierre-Emerick Aubameyang with the forward involved in more minutes – roughly 93% of the overall league minutes – than any other Arsenal outfield player.

After struggling for minutes last season, Héctor Bellerín has been involved in roughly 84% of the minutes. Kieran Tierney’s versatility has allowed him to become an important part of this Arsenal squad with the 23-year-old Scotland international already involved in more minutes than last season. 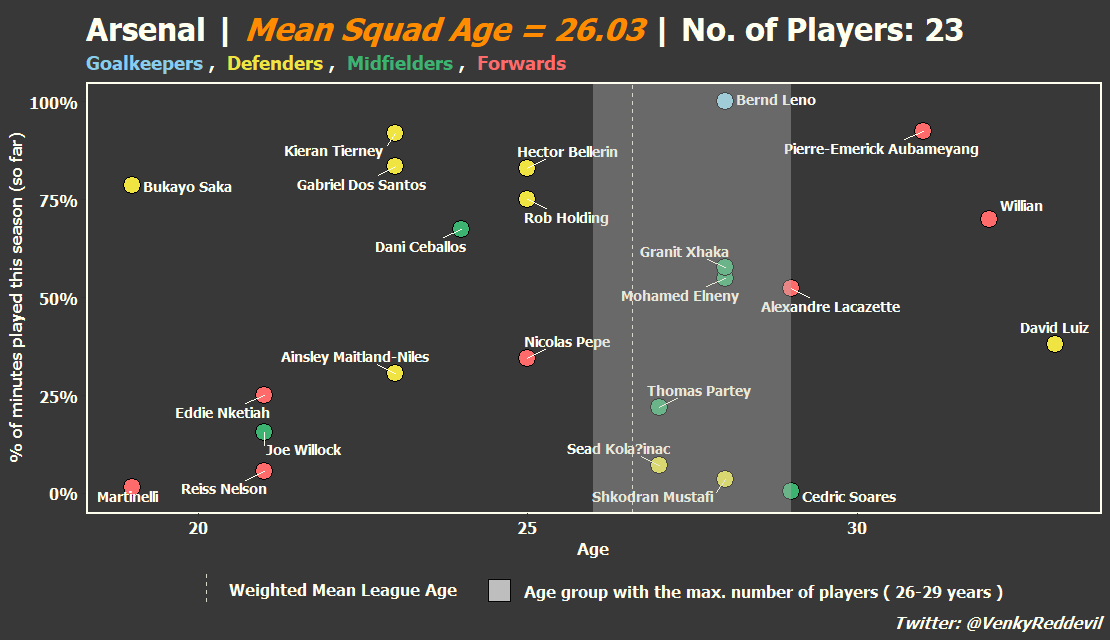 Verdict: Having secured the signings of Thomas Partey, Gabriel, and the loan signing of Dani Ceballos in the summer window, the defense side of Arsenal looks quite well. They need to add some creativity to this squad with not a lot of game-changing individuals in that squad but before that, Mikel Arteta will look to clear some players on the fringe before making way for the newcomers.

Burnley looked really short of players towards the end of last season because of injuries to key players but that did not stop them from finishing the season on a high. The Clarets used just 22 players last season – Only Wolves used a fewer number of players in the league during the 2019/20 season.

Manager Sean Dyche has so far used 21 players this season but there is a very big chance they could be bottom of the table for that statistic by the end of this season. Burnley’s ever-present defensive pairing of captain Ben Mee and James Tarkowski have been forced to miss games because of injury and the two players have been involved in only 54% and 85% of the overall minutes respectively. 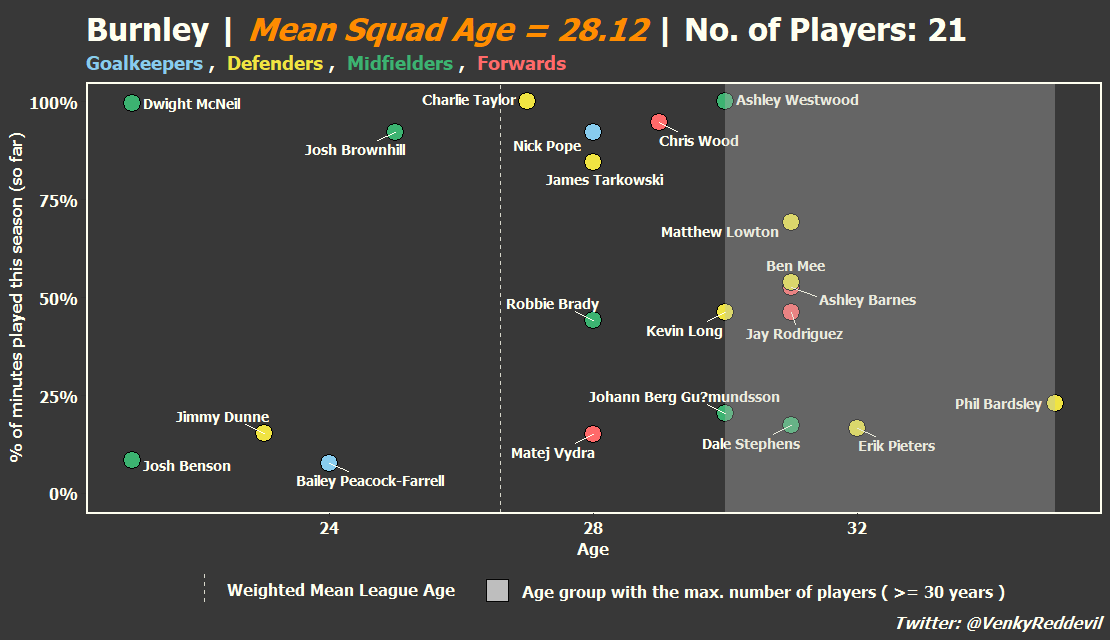 Verdict: Sean Dyche has not been given the option to spend big in the market. The manager has more or less stuck to a small group and used some of the players quite consistently. In spite of needing some additions to the squad, Burnley’s only signing in the window was Dale Stephens – who has not played a lot this season.

The new takeover completed very recently signals the start of an exciting period in the club. The Clarets’ squad is quickly ageing and they need to quickly find some replacements starting with the attack.

Graham Potter’s Brighton & Hove Albion have struggled to win games this season, not just that, one could also argue the manager has struggled to find his best XI. The Seagulls have used 22 different players this season with the majority of their players between 26 and 29 years old.

Goalkeeper Matthew Ryan was the only Seagulls player to have played every minute of last season but Ryan has been out of favour this time around and has lost his place to Spanish goalkeeper Robert Sánchez –  involved in 21% of the overall minutes already. The Spaniard spent the past two seasons on loan at Rochdale and Forest Green Rovers, but he has been a constant since making his debut on November 1 against Tottenham Hotspur.

The biggest surprise so far has come in the form of Dan Burn and Davy Pröpper with both players not seeing game-time regularly this season, with the dutchman Pröpper not involved in the league up until Matchday 14. Danny Welbeck, another summer signing, having seen a lot of injuries in his career with the former Manchester United and Arsenal player involved in roughly 43% of the overall minutes, already.

Verdict: Brighton do have a squad for the future with players like Tariq Lamptey, Aaron Connolly, Steven Alzate, Yves Bissouma, Neal Maupay all still in their early years. However, there is a real lack of experience in this squad.

The additions of Adam Lallana, Danny Welbeck, Joel Veltman partly solve that problem but Brighton are far away from becoming a regular in this division. But their smart signings during summer windows mean they can once again go and replicate it in the winter window and the seagulls will look to start with signing a player who can play either side of the center-forward.

Scott Parker’s Fulham, the second youngest squad in terms of mean squad age, are 17th in the table after Matchday 14. Fulham have a majority of their players between 23 and 25 years old and this lack of experience could also be one of the reasons for their struggle this season.

Fulham had a real challenge to find their best goalkeeper when they were in the Premier League in 18/19 – using three different goalkeepers in the league. That has not been the case this time around with the signing of Alphonse Areola, who has been an ever-present since arriving on loan from Paris Saint-Germain. 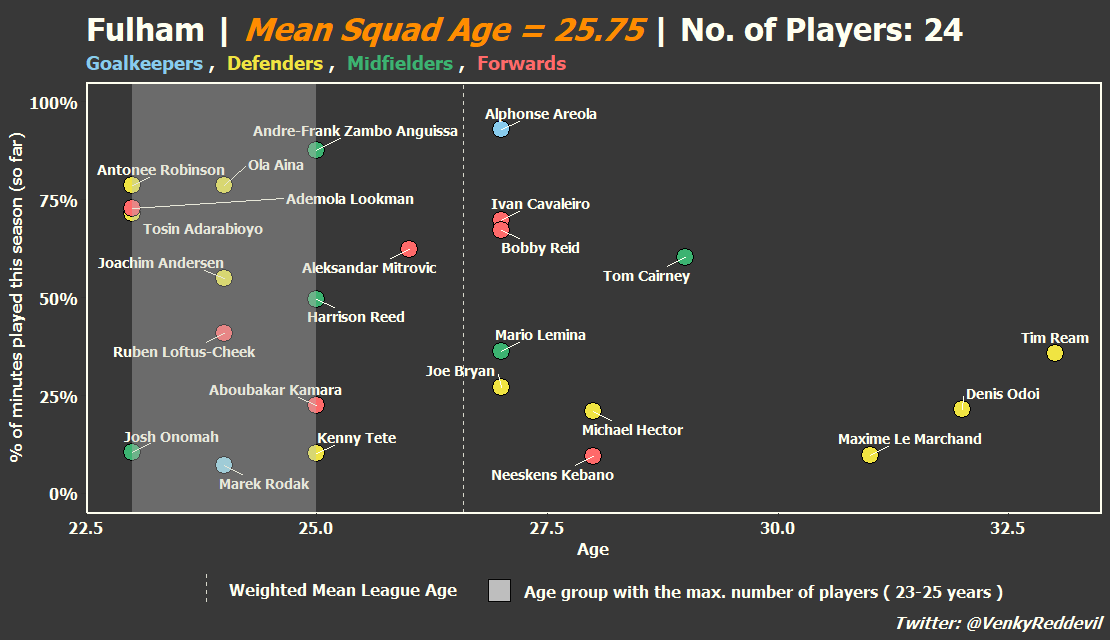 Highly-rated Andre-Frank Zambo Anguissa is the only Fulham player to have been involved in every league game of the season so far ( at the time of writing). Forward Aleksandar Mitrović has been involved in only 62% of the overall minutes.

Verdict: Fulham’s squad is relatively young and some of their players are regularly playing for the first time. Scott Parker will look to add short term options to the attacking side of their team that will help them stay in the division for another year.

West Brom are second from bottom in the table with only one win against their name. The Baggies’ squad is nothing short of experience with the majority of their players greater than 30 years old. However, as seen in the plot below, most of their attacking unit are below 25 years old with a real lack of premier league experience. It has to be said that West Brom are in the top half for average mean age in the premier league. So, the entire squad has a good mix of youth and experience. 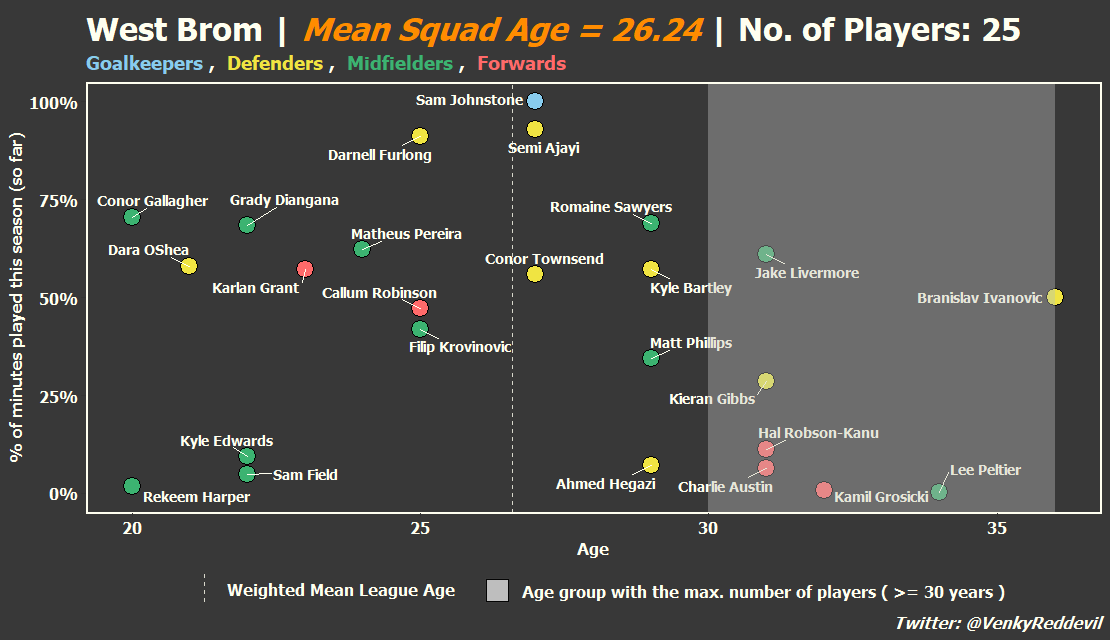 The attacking unit of West Brom has not escaped rotation with Matheus Pereira, Callum Robinson, Karlan Grant, Grady Diangana all being rotated and dropped during periods with Diangana involved in more minutes than anybody else among the four (at the time of writing).

Verdict: The January Transfer Window is absolutely vital for the Baggies and manager Sam Allardyce will once again look to succeed in avoiding relegation from the Premier League. One can expect West Brom to sign a defensive midfielder, an attacking midfielder that will be a valuable addition to the depth.

Sheffield United are rooted to the bottom of the table with no wins to their name so far and there is more than one answer as to why they have been struggling. One key reason could be that the Blades have struggled to find the right combination of players after missing key players because of injuries. Manager Chris Wilder has used 23 different players so far – they used 26 in the entirety of last season but it has to be said now is a different scenario because of the pandemic.

The Blades have especially struggled to find the right combination in defense after their backline was pretty much the same throughout last season. At the time of writing, only George Baldock and Aaron Ramsdale have been involved in every minute of the league season so far. Captain Billy Sharp, having played close to 1000 minutes in the league season has been involved in only 15% of the overall minutes this season. 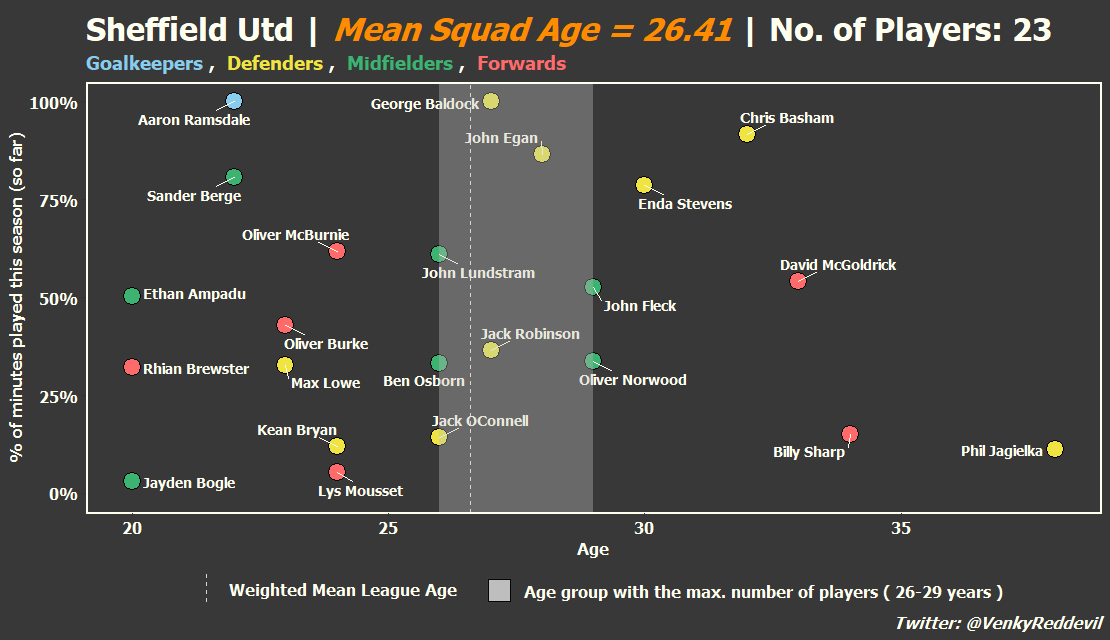 Trying to replace Jack O’Connell has been a real challenge for manager Chris Wilder with the manager using different players in O’Connell’s position with Enda Stevens too playing there at times. Stevens has missed a few games himself and has made 11 appearances accounting for roughly 79% of the overall minutes.

The attacking group of Sheffield United has struggled to find the back of the net and this has seen manager Chris Wilder use a different combination of players to lead the attack. Oliver McBurnie has played the most minutes among forwards ( at the time of writing ) – 62% of the overall minutes. David McGoldrick comes second among forwards playing roughly 54% of the overall minutes.

Verdict: Everything Chris Wilder is trying at the moment is not working. The Blades’ struggle to score goals has been real and none of the combinations have worked out for him. Losing Sander Berge because of injury is a cause for concern. However, the Blades can solve some immediate problems by signing a creative player in the market.

Over the three parts, I have analyzed the 20 Premier League teams to find out how and where they stand before they enter the January transfer window. The busy festive period saw different managers give opportunities to the fringe players – some players grabbed the chance with both the hands and others not so.

The coronavirus pandemic has seriously raised question marks over the financial situation of different clubs. Whatever the case, the different clubs will look to achieve their goals for the season come May. With new rules being implemented in England post-Brexit, clubs will be wary of the challenges that lie ahead of them to sign the players they want. Put in simple words, another challenging, dramatic transfer window is on the cards.