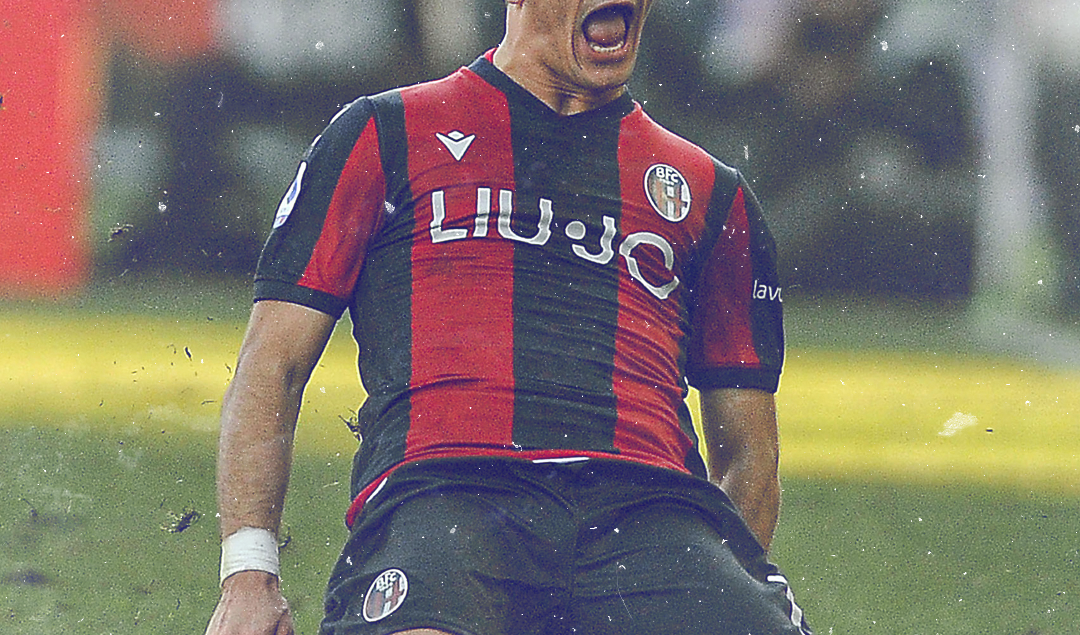 As evidenced by their current 10th-place standing, Bologna are traditionally a mid-table Serie A club. In their history they have won the Scudetto six times, although recently they have endured stints in Serie B, only being promoted back to Serie A in 2015 after a series of ownership changes and financial turmoil.

In the last five seasons they have improved every year and currently sit a mere two points behind AC Milan. The future looks brighter than ever for La Rossoblù due to the new wave of young talent that is at their disposal. Their star man, Riccardo Orsolini, epitomises this new era of football in Bologna and is gaining attention from a plethora of top teams.

Juventus purchased the flamboyant right-winger from Ascoli for £7 million in January 2017. Later, he joined Bologna on loan, and after an impressive loan spell the deal became permanent, with the Turin giants receiving around £15 million for the transfer.

La Vecchia Signora are rumoured to have a buyback option on Orsolini, but this was put into dispute by Bologna sporting director Walter Sabatini who has insisted that the attacker is worth £70 million in today’s market. 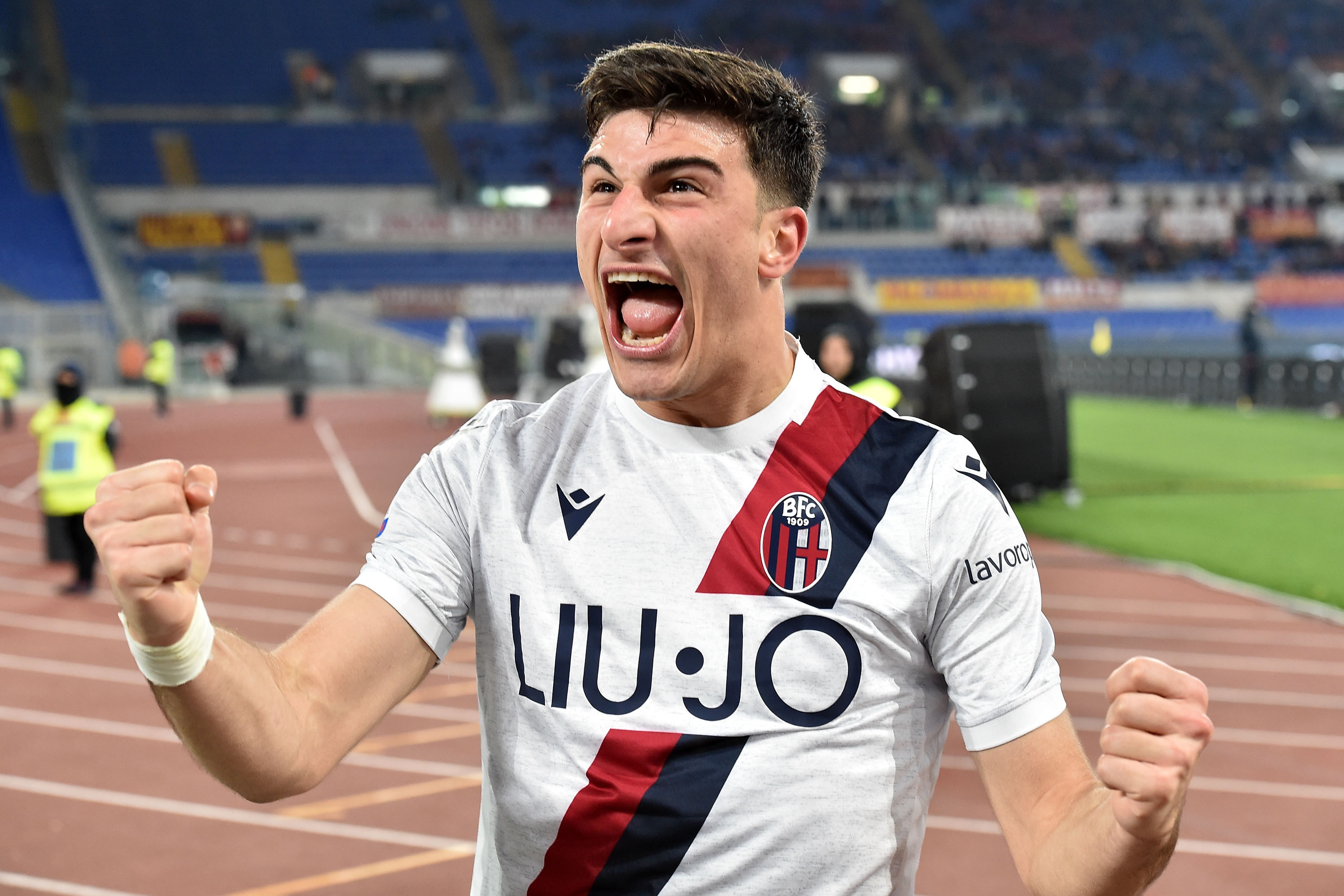 Orsolini has arguably been Sinisa Mihailojic’s sides best player this season, scoring 7 goals and assisting 5 from the right wing in 26 games. However, his goal scoring abilities aren’t what stand out, as he is incredibly creative and useful in the build-up, while he has also the pace to beat out his left-back.

The 23-year old is a wonderfully talented, versatile, young player who hasn’t yet hit his prime so it’s a given that Juventus are heavily linked with the Italian and he would fit perfectly into Maurizio Sarri’s favoured 4-3-3 formation.

The Bianconeri will be looking for another attacking option due to the persistent injuries of Douglas Costa and the aging of Cristiano Ronaldo and Gonzalo Higuaín, but with Dejan Kulusevski joining and Federico Bernardeschi hitting his prime, the move is perhaps unlikely, especially when you regard Orsolini’s importance to Bologna and Sabatini’s valuation of him.

Another player who is an exciting prospect and crucial to Bologna’s success going forward is Nicolás Domínguez. The Argentinian, who joined Bologna for £6.6 million in August 2019, is mainly deployed as a central midfielder. Domínguez joined from Primera Division side Vélez Sarsfield and was loaned back to them by Bologna until January as part of the deal. 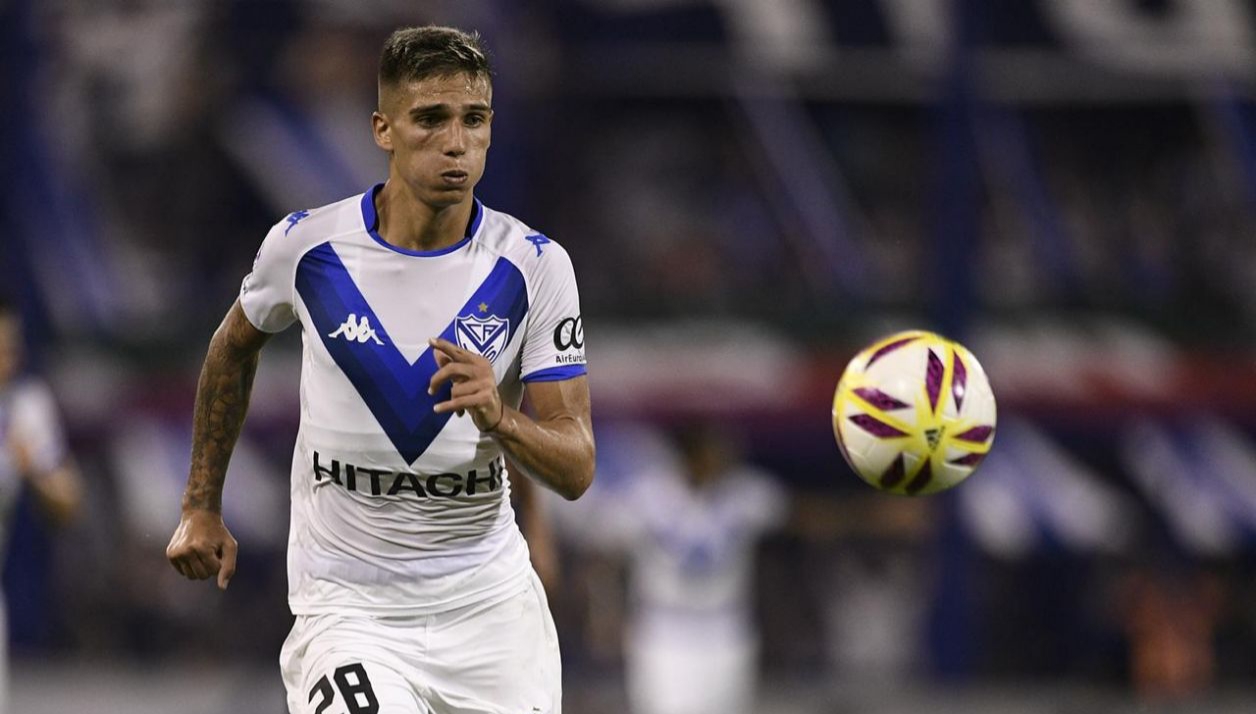 Since January he has played 5 times for Bologna and has impressed but was particularly impressive for Vélez in the first half of the season. Domínguez signed for Vélez at the age of 7 and came through their academy before rising up to the first team. Then manager Gabriel Heinze deployed him as a box-to-box midfielder, and he started the 2019/20 season off exceptionally, scoring 4 goals in the first 6 games.

Like Orsolini, Domínguez is a versatile player and was deployed as an attacking, central and defensive midfielder for Vélez. His ambidexterity allows him to perform on either sides of the midfield, while his capacity to play first-touch football with both feet makes him a valuable player to have in the initial phase of possession, and by sinking into deeper positions he is able to aid the centre-backs, relieving the pressure off of them.

The 21-year old’s passing is one of his strengths, as he boasts an 84% passing accuracy over the last 4 seasons. His shooting and presence in the final third is traditionally poor but for Vélez this past season, he scored 0.59 goals per game. An aggressive tackler, he also completed 10.67 successful defensive actions per game, while his slide tackle success rate is 72.7%.

The Argentinian national team have taken note of his performances, rewarding his good form with two caps. He only just joined Bologna in January, so it is unlikely that he will leave anytime soon, and he is certainly a crucial part of their team going forward.

Musa Barrow is also a key part of Bologna’s future and current success. The Gambian international joined La Rossoblù in January on an 18-month loan deal from Atalanta. Fortunately for Bologna they have a mandatory purchasing option totalling around £20 million (including add-ons) which is likely to be exercised in February 2021. 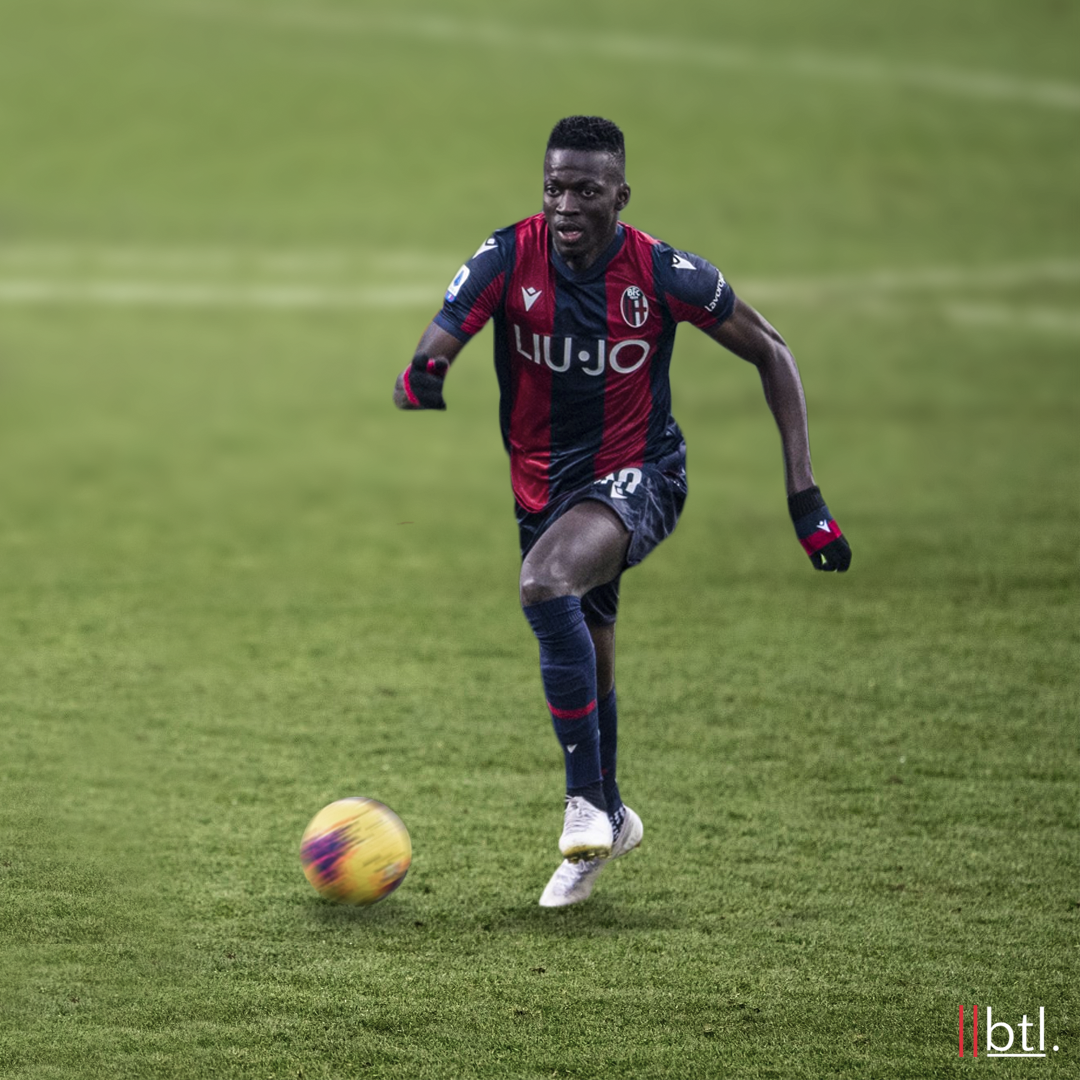 Known as Printo, the talented 21-year old moved to Atalanta in 2016 from Gambian side Hawks FC where he completed his football education and came to prominence as an 18-year old in 2018 after scoring 19 goals in 14 games for La Dea’s U19 side.

Barrow is blessed with a lethal combination of devastating pace, power, skill, trickery and an eye for goal, and has consequently been shortlisted as one of the best young players in Africa by the Confederation of African Football.

In the 2018/19 season he was impressive for Atalanta in the Europa League, netting a hat-trick against FK Sarajevo and a goal in a 4-1 win against Hapoel Haifa. However, as the season progressed, he struggled for minutes with Gian Piero Gasperini preferring Emiliano Rigoni, Duván Zapata and Alejandro Gomez as Atalanta qualified for the Champions League for the first time.

Therefore, due to a lack of game time, Barrow joined Bologna on loan with the option to buy in January 2020. He has since played 14 games, having scored 3 and assisted 3, and while this isn’t fantastic, he is still only 21. He will prove to be crucial for Bologna in seasons to come and is set to take Serie A by storm.

Takehiro Tomiyasu is another Bologna player to look out for. The Japanese defender was bought last summer for £8 million from Belgian side Sint-Truiden has impressed in his first season in Italy. The 21-year old is traditionally a centre back and was always deployed there in Belgium, but manager Siniša Mihailojić has transformed him into a right back. 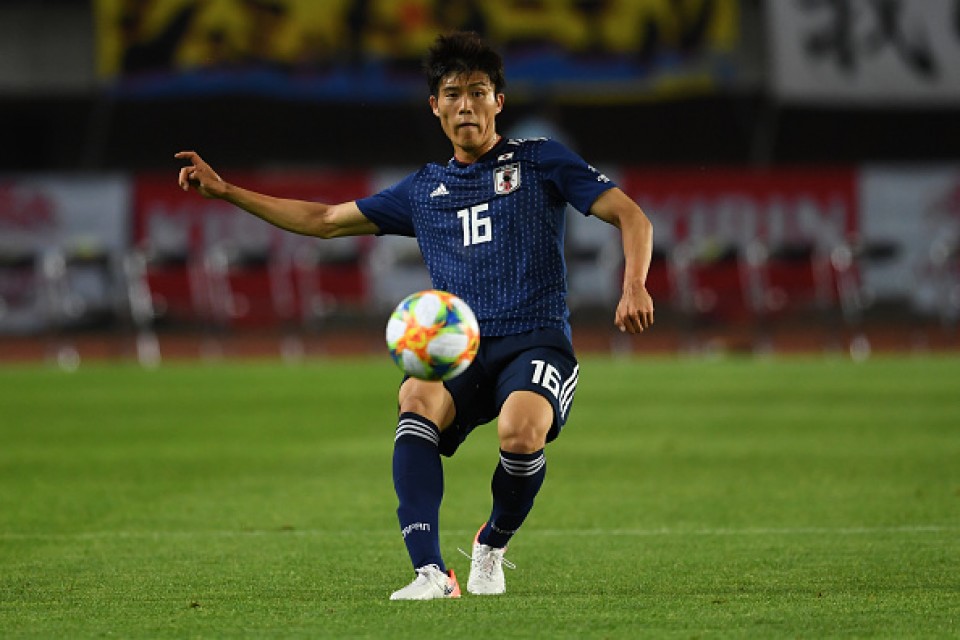 However, Bologna deploy a 4-2-3-1 with an asymmetrical system meaning that Tomiyasu joins the centre halves to make a back three while in possession while shifting to the right to make a back four while defending.

This works well for Tomiyasu, as the natural centre half is elegant on the ball in build-up and comfortable in the tackle: he therefore has all the makings of a modern defender. At 6”3, the Japanese international is surprisingly aesthetically pleasing, but lacks the physicality to be an out-and-out centre back at the moment.

Defensively, he suits the Serie A’s defensive discipline as he doesn’t press too much and is good at delaying players which allows support to arrive. He also defends the wide areas well with shrewd awareness and reading of the game.

He is yet another exciting player who plays a key part in Bologna’s defensive system, and at just 21, he has the potential to improve drastically.

The last player to highlight is 19-year old Emanuel Vignato, who is currently on loan at Serie B side Chievo Verona. The Italian is a Chievo academy product and joined Bologna in January 2020 for just £1.8 million, before being loaned back to Chievo for the rest of the season.

Vignato, like most of the other players addressed, is incredibly versatile and can play as an attacking midfielder, a no.8, or a right-winger. This season in Serie B he has scored 3 goals and assisted twice, but like Orsolini, he has a lot more to his game than goals.

Firstly, he is a fantastic dribbler of the ball, who boasts a good passing range and a rapid acceleration. As with many young players however, Vignato needs to improve his physicality on and off the ball, and needs to remain involved in games where his team has little possession.

The Italian is an U-21 international and was promoted to Chievo’s first team in 2017 at the age of just 16, highlighting his immense potential. When he returns to Bologna next season, he will be looking to make an impact and could prove to be a star performer.

Bologna also have promising young players like Andreas Skov Olsen, Mattias Svanberg and Nicola Sansone, making it one of the most exciting teams to keep an eye on in Serie A Sabatini has done a masterful job of collecting these youngsters, and the Rossoblù faithful will be praying that they can hold on to these talented bunch of youngsters.