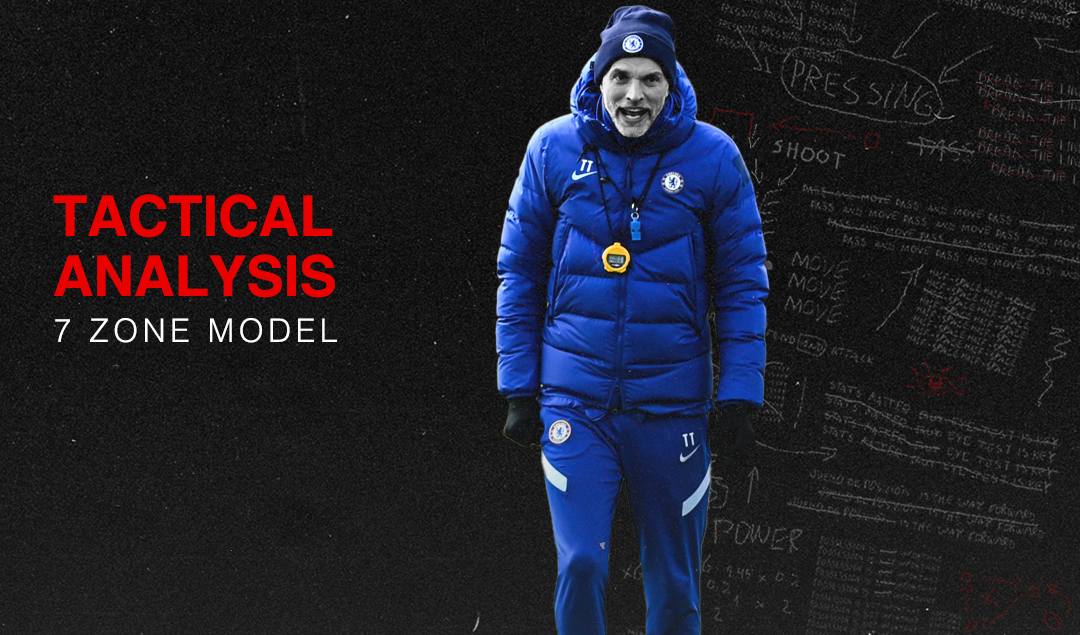 Thomas Tuchel uses the methods of positional play to achieve this optimal possession positioning,  which @la_notice_ details here: What is Positional Play? – Breaking The Lines. The crucial element to take away however is the use of vertical corridors to dictate positioning whereby the wide centre backs when possession is central sit in their respective half-spaces, whilst the double pivot typically occupies the widest reaches of the central pitch and the centre, centre back orients himself centrally.

I would argue at Chelsea, the 3-2 structure used leads to the 7-zone model being more appropriate when analysing and considering positioning. The 7-zone approach in comparison to a 5-zone approach is based on the importance of establishing connections and preparing around predictable opposition response.

The 5-zone approach largely suffices when the ball is in a central area due to the reduced coverage of wide areas by the opposition to remain compact and the increased effective pitch coverage in possession which encourages greater stretching of the pitch whereby the flanks become free – this then works at facilitating easier connections the ball can be swiftly moved from the player occupying the half-space as a wide passing connection is almost always open. 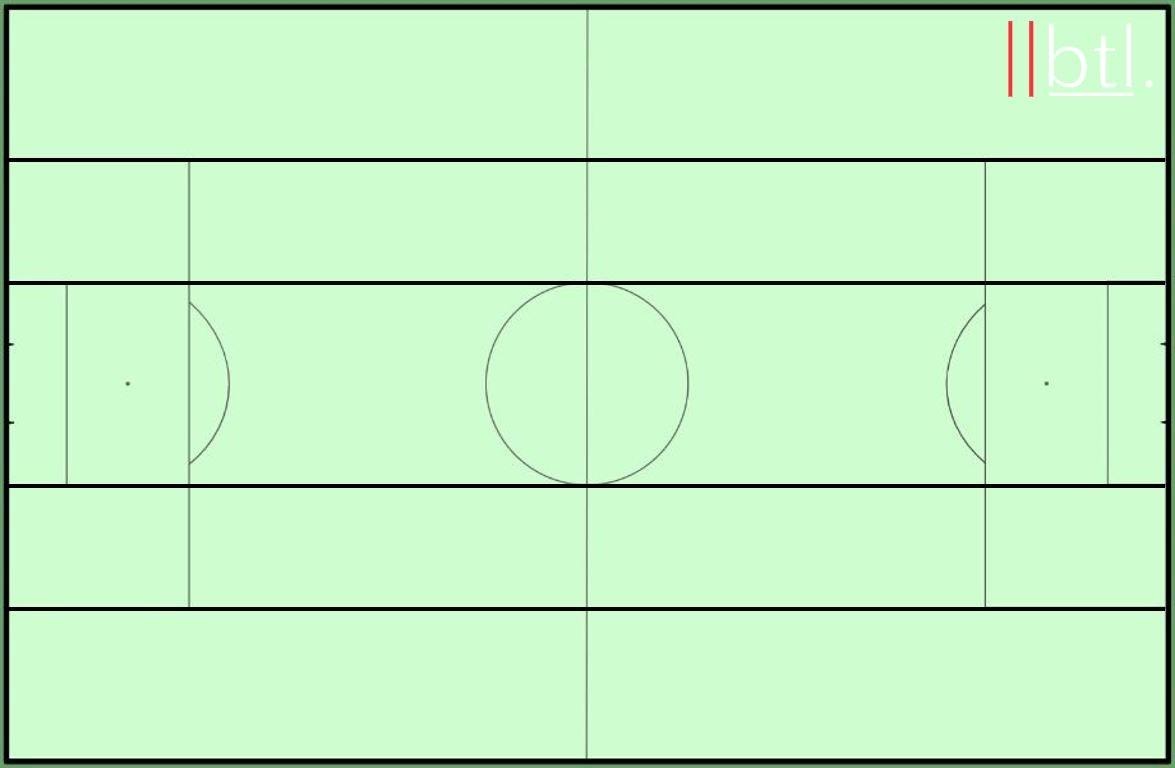 However, when the ball is moved to the ‘half-space’ and other wider regions, the spaces in between the lines to connect become reduced gradually as the compact positioning of the opponent in covering wide areas alters the dynamics.

Moving the ball away from central areas is necessary to progress because of opposing compactness in the region and can be a tool of exploitation via quick circulation which seeks to expose lack of coverage on the opposite flank meaning this outcome is not a flaw in a system but a necessary part of it to adjust to because of universal opposing defensive principles. This dynamic then requires further separating as to indicate where the point of connection can more feasibly be, thus increasing horizontal staggering within that area of the pitch to facilitate progression.

It should be noted vertical staggering also helps because it serves to increase the size of the effective pitch in a constrained area, although this becomes decreasingly effective the longer the ball carrier holds possession because opposing pressure gradually reduces potential passing options due to increased proximity to the player reducing effective space.

Dissecting the Ins and Outs of Build-up Play

To illustrate, when the wingback receives they immediately become constrained by the touchline having their options reduced and often that effectively acts as a pressing trigger limiting their time in possession – thus the centre back following the 5 zone model would be flawed in using it as a positional reference point because the pass would be too difficult to achieve requiring closer movement which can be instructed via cutting the half-space when the ball is not central as a reference point for further positioning.

The 7-zone model is moreover only useful in the build-up phase because of the numerical situation present allowing for high levels of involvement by many players which cannot be achieved in deeper regions because the numerical situation shifts from one of superiority to inferiority. That is moreover, not to say teams using the 5-zone approach manifest these flaws, rather the principles get ignored temporarily as players adjust outside the constraints or more so sensibly adapts – the 7-zone model attempts to be more holistic.

Within the half-half-space optimal positioning is typically double-pivot player in the narrower half whilst the wide CB and interior player are almost vertical in the wider half-space to connect with the wing-back. Although to draw the press narrower to create space for the wingback the dynamic can be reversed with the CB and interior moving narrow and double pivot player wider to open the passing lane through dragging a pressing player or alternatively being free to release possession directly to the wingback without a mini-up back and through CB-DM-CB-AM-WB combination. 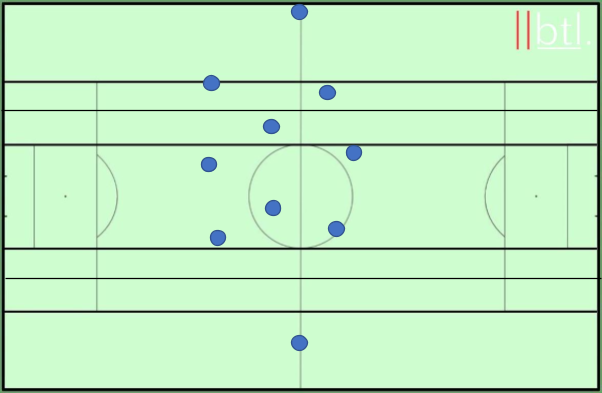 Another way of conceptualising this is thinking of the split when the ball is not central as marking the deep narrow full back positioning most prominently seen at Sassuolo in a back 4 but commonly occupied by defenders in a back 3.

The purpose is to help with central circulation while providing a direct pass to the flank and a vertical pass to the interior player (AM/CF in a 4231) and similar reasons are present therefore in a back 3 as it makes it difficult to simultaneously maintain centrally compact, apply pressure to the ball carrier, cover the player on the flank, the passing lane to the double pivot and the vertical pass which can be accessed via circulation.

Thus, it establishes quick connections upon reception to players in dangerous areas who can subsequently combine due to the potential for up-back and through/give and go situations. This makes the opponent reticent to press highly, focusing rather on making reception difficult for combinations allowing for deep possession to be better held.

The network of short passing connections provided by the 3-2 structure and the 3-4-2-1 more generally thus disincentivise pressing with the intent to win possession quickly due to potentially exposed space, which subsequently allows Chelsea to control games, and controlling games leads to conceding very few chances, particularly when not committing heavily to attacks. Tuchel’s shape at Chelsea therefore facilitates quick circulation which can quickly respond to opposing teams pressing.

Jones then continues his pressure to Rüdiger while simultaneously attempting to cut the passing lane to Jorginho who moves slightly, into the deep narrow full-back position which opens the vertical pass for Rüdiger. Jorginho moreover pivots as to receive on the half-turn to be capable of passing it forward should Jones focus to a greater extent on Rüdiger.

Mason Mount himself receives with backwards orientation to play a lateral pass to now free Ben Chillwell who has time and space to play a direct pass to expose space in behind Liverpool’s defence to Timo Werner.

This was achieved through the nuances in half-space positioning – particularly Jorginho’s slight movement – that is not to say he was influenced by this mode of thought which could have originated from multivariate sources, but rather it shows the effectiveness of thought applied. The pattern itself was an up-back and as previously mentioned to be effective in the shape because of the potential to adapt attacks on the ball side due to intelligent positioning.

The effectiveness against pressure therefore creates a conundrum – allow the team with low-risk possession to have security in their possession or expose yourself to risk attempting to press with similar numerical commitment generating opportunities which a risk-averse team class as justifiably worthy of attacking.

In the above instance, the low-risk team in possession has maintained the same positioning and is thus secure from losing possession from a transition, allowing them to risk the potential goalscoring pass against exposed opposing space.

Overall, it should be noted these models are recommendations for rough positioning which are principles rather than rigid patterns which should be followed – the half-space and half-half space do not exist on the pitch but rather as concepts to be aware of when positioning as to optimise options for the ball carrier. When the categories lose their utility, they should be dropped as the fundamental importance derives from the ability to help establish passing connections to generate time in possession and expose opponents lack of coverage.

Particularly within Chelsea’s system, circulating quickly and not being quickly constrained is of paramount concern which makes knowing what regions to move into imperative as because of lack of numerical commitments to transitions, exposing the opponent via quick interchanges on the near side featuring a frequently involved centre back and interior player linking with the wing-back and centre forward supporting or quickly switching play to expose lack of coverage, often using wide centre back forward momentum to advance possession.

In both instances, however, compacting on the near side is crucial to connect to further expose unprotected regions of the pitch. The aim when moving wide is to contract to subsequently expand – vertically on the near side to exploit the opposition’s presumed tight marking due to engaging in a touchline press – or horizontally on the far side.

This often requires fluid dynamic movements through overloading vertical corridors as the principle of occupation is more important with regards to circulation and consolidated possession whereas when facing tight marking transitional states are often provoked through quick interchanges making rotational runs which cause temporary overlaps and lack of coverage useful.

The 7-zone model, therefore, seems best adapted to teams to teams with a deep central numerical commitment that emphasize increasing the size of the effective pitch through coverage and connections which use the ball as a reference point of adaptation. The primary benefit is that of increased connections through facilitating better staggering adapted to predictable movements of the opponent which can allow for fluid passing sequences to occur which expose space in behind the opponent or otherwise help to consolidate possession.