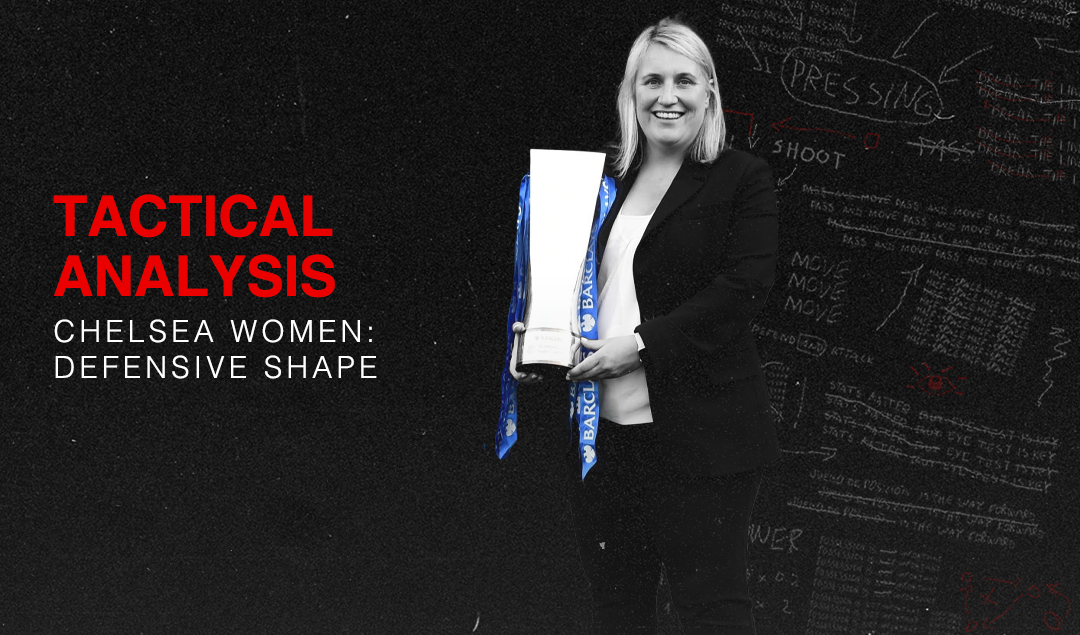 Emma Hayes’ 2020-2021 WSL Super League campaign is nothing short of remarkable and is a resounding story of hard work and perseverance through a multitude of trials and tribulations. Hayes experienced both success and failure throughout her career which consisted of time spent in the United States in various football positions consisting of club, collegiate and professional sides. Her vast coaching experience has helped her not only develop a high tactical and technical IQ for the game, but also a remarkable ability to connect with players at an in-depth level in order to influence their minds and their hearts.

Hayes has brought a uniquely wholesome aspect to professional coaching, and often wears her heart on her sleeve when discussing the ins and outs of her own organization.  This “no holds barred” approach has provided a refreshing perspective to coaching as a whole which also helps provide additional praise to how open she is with her players.  Her specified individual player management has aided Chelsea’s high performance output by “meeting players where they are” by providing personalized care, information, and treatment to each player depending on their specific needs.

There have been countless stories told about how she has helped players grow not only on the pitch, but more importantly off. Some players are treated with tough love while others are provided with an arm around the shoulder, Karen Carney, for instance, has been described by Haye as needing “stimulation and detail” in order to remain focused while players like Kerr need little information and just a guide in the right direction to stir performance.

Chelsea Women: The Majestic Queens of the WSL

Hayes’ spectacular player management has helped propel Chelsea to new heights, winning the WSL in breathtaking fashion on the last day of the season with a commanding 4-1 win over Reading. Chelsea have also produced some compelling stats over the WSL 2020-2021 calendar year, racking up the highest points total in a season (57), the most home wins in a season (10), and currently have the hottest strike partnership the league has ever seen with the likes of Sam Kerr and Fran Kirby who have combined to produce 37 goals and 18 assists in the WSL which helped extend Chelsea’s grand total to 69 goals scored- just one goal shy of breaking the league’s goal-scoring total held by Arsenal in the 2018-2019 season.

However, with all of the hype surrounding Chelsea’s goal-scoring prowess, the Blue’s stinging defense has helped carry them to newfound heights.  Chelsea conceded just 10 goals all season in 2020-21 which was the lowest total ever in a 22 game season of the WSL.  In addition, goalkeeping stalwart Katherine Berger proved to be a profound anchor in the backline which only conceded 10 goals all season and produced a steely 15 clean sheets, with 12 of them coming from Berger in goal.

To compliment Chelsea’s GA record, they only faced 126 total shots in the WSL which puts them only behind Manchester City who faced a total of 119.  The Blues managed to do all of this by also making the greatest amount of substitutions in the WSL, with 87 total in the 2020-2021 season.  This shows just how deep and well-rounded Hayes’ side was, while also adding various tactical nuances that continued to amplify Chelsea’s rigid defense.

Chelsea’s defensive tactics can be typically viewed in a 1-4-4-2 or a 1-4-3-2-1 shape, while having defined low-block, middle-block, and pressing scenarios when out of possession.  The 4-4-2 shape has been Chelsea’s go-to formation when defending. 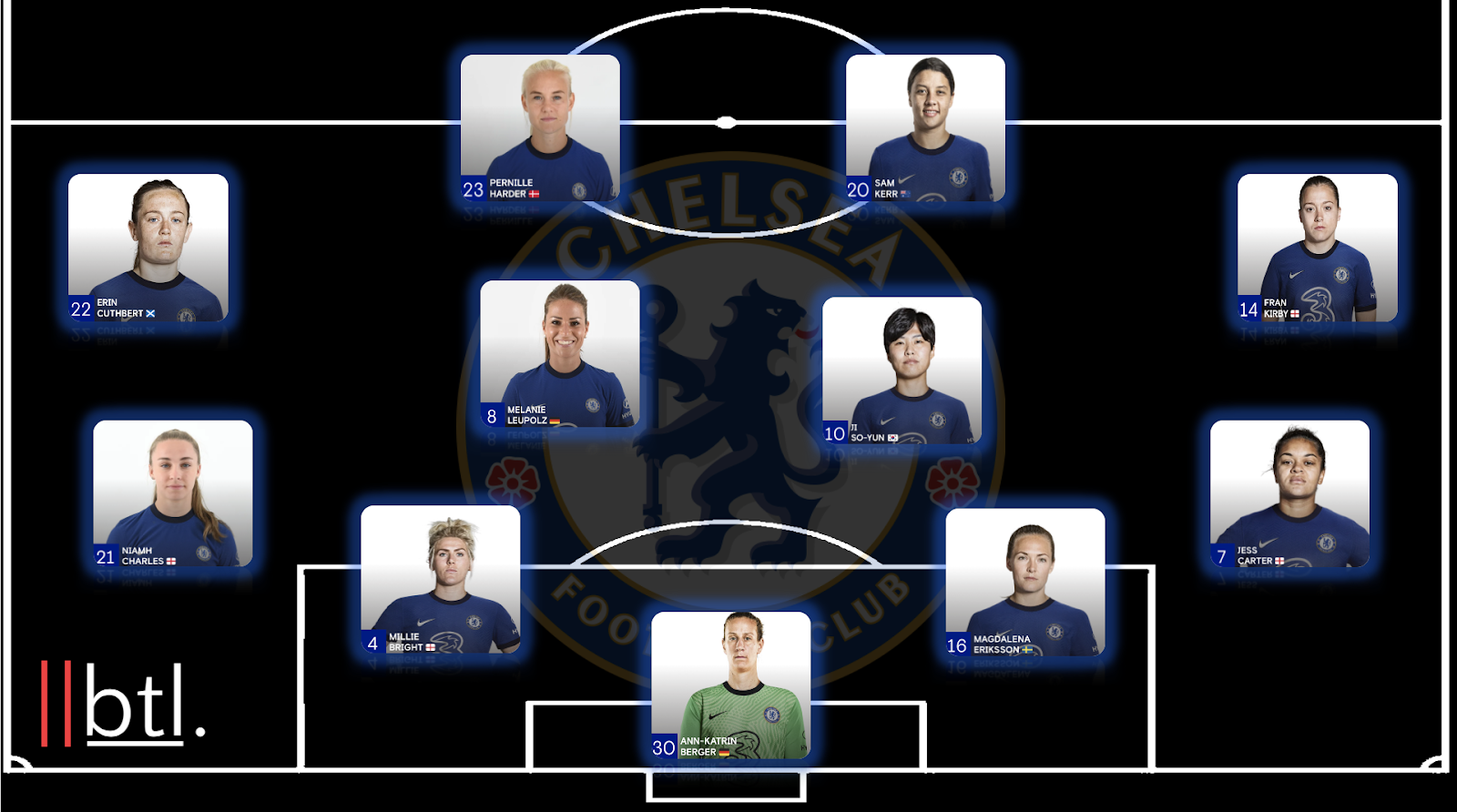 -Shift to wing players- force them to play back or square

-Double down out wide

-Look to transition quickly once possession is regained

Chelsea’s low block primarily consists of all 11 players regrouping behind the ball in a classic 1-4-4-2 structure.  Similar to Atlético Madrid’s former 4-4-2 structure of recent years, Chelsea look to cover space in two banks of 4 while the front two, which can consist of Sam Kerr, Pernille Harder, Fran Kirby, or Bethany England, apply the initial sense of pressure. The front two typically work to deny central passes into the opposition’s CDM/CM’s and push the opponent into areas out wide where Chelsea’s wingers have the tendency to double down in.

They have had much success in these areas when countering out of their low block and winning the ball from overloading numbers in the wide channels.  Once the ball is won the pace of Kerr and Kirby in particular, is hard for opposing teams to defend. Here are some examples of how Chelsea have won the ball through numerical overloads in wide areas and have transitioned successfully into the opponent’s half to create goal-scoring chances.

Coaching positional play and dynamic space occupation is a task that will need a lot of planning and commitment. No team can be expected to play this style by a fortnight of practice. Progression can only be made gradually as this style requires the whole team to think and act in synchrony throughout the game. The purpose behind each drill in training has to be:

Dividing the play area into zones and using constraints can help with improving the above mentioned aspects but the constraints and division of zones must be realistic to the game that you wish to play. Also it should be noted that the constraints must be there to encourage fluidity and flexibility, not to hamper them.

Since positional play requires the players to maintain short but adequate distances between them, pressing and counter-pressing can be looked at as a part of positional play. Thus it must be ensured that every game or drill during practice must permit moments of transition. The aim of coaching here should be to create a very responsible free flow football and the means to it can be, instilling automatism not just in movements in and out of zones but also in performing the required function.

A large reason that Chelsea is able to win the ball in these wide areas is central midfielder Ji So-Yun’s ability to cover for CB’s Millie Bright and Magdalena Eriksson in the back while also shifting out wide to provide support to the wide players when defending.

-Squeeze space in behind

-Force them to go long or play wide

The mid-block shape of Chelsea is fairly similar to the basic 1-4-4-2 construct of the low-block with emphasis of preventing passes being made centrally in between the lines of the Blues’ 2 banks of 4.  The difference in Chelsea’s mid-block shape is that the space behind the backline is much greater to exploit and the wide players must cover more ground in order to press the opposition’s outside backs.

Kerr, Kirby, and Harder typically help out in these scenarios and often drop back to help cover the opposition’s deep-lying central midfielders to prevent any central entries.  It is important that Chelsea’s wingers are aware of what is behind them and prevent passes into the half-spaces to any rotating forwards feet, forcing the ball wide to wing-backs that initiate a wide press.

Once the ball is in wide areas, Chelsea “swarm” to provide immediate numbers up pressure to win the ball.  Chelsea’s line of confrontation seems to be at the top of the “D” but this changes once the opposing backs look to dribble from wide positions on the pitch. Preventing the opposition from changing the point of attack is vital in these areas.

Chelsea look to organize early and transition into a 4-4-2 Mid-block early, Kerr and Harder provide the initial pressure to “stall” the opposition’s progression.  Harder often works with Ji So-yun to help cover if she gets caught pressing high, Chelsea’s press then forces the ball wide where Kerr’s pressure and Erin Cuthbert’s central positioning leads to a giveaway by Manchester City’s Abby Dahlkemper.

-Split the difference between players

-Close down players who are facing their own goal, head down, poor technical execution, etc.

-Keep the opposition one way

-Win the ball and counter quickly to goal

Perhaps Chelsea’s most pivotal defensive shape is their pressing organization when the ball is in the opponent’s half.  This is typically conducted in either a 4-2-3-1 shape or the traditional 1-4-4-2, which is typically oriented with a diamond midfield.  This pressing shape has been particularly effective this season producing an average PPDA of 8.58 which only places them behind Manchester City with a PPDA average of 6.93.

Chelsea’s structure is reliant on the pressing position of Kerr, Harder, and Kirby who are typically oriented to mark out the opposition’s center backs and to prevent any access to the central midfield players when pressing from open play or in a goal kick scenario. Here we can see how both of Chelsea’s forwards mark the CB’s of Wolfsburg. Kerr drops into the front of the 4-4-2 diamond which pushes the ball into the right CB option.  An uncharacteristic mistake is made but this shows how Chelsea’s press is set up from the front.

A vital piece of Chelsea’s press is how the entire team follows and remains committed to pressing as an entire unit.  This high risk, high reward philosophy has helped the Blues win the ball in advantageous areas that are already close to the goal and with high numbers surrounding the ball due to the committed mentality of the team.

The integrity of the press relies on the fluid interchanging of the two strikers and the attacking central midfielder.  Many times a pass may break the forward line and come into the midfielders zone, it is then the midfielder’s job to keep players facing back to goal and to push them to one side if possible.

This acts as a second trigger for the forward players to press the midfielder in possession as they are now predicted to play backwards or laterally.  The second forward also recognizes this and begins to press towards the backline where the intended receiver typically lies.  Forcing the opposition in predictable manners helps generate cues for other players to press in identified scenarios where risk vs reward is very high.

Although Chelsea’s defensive structure is largely very hard to break down, some aspects may prove to be problematic down the road when teams who are better at creating space in front of the back line come into play – much like FC Barcelona.

Here we can see that once teams break the first midfield block of 4, then they can create opportunities with interchanging runs.  Chelsea’s CB’s are instructed to apply hard pressure to the ball and deny opposing strikers to turn, when this interval occurs the opposition can play off of forward players and back into vacated space to execute an “up-back-through” sequence or to simply flick a ball in behind causing the other CB to track across.

In order to help shore up these defensive scenarios Chelsea may look to switch to a 4-4-2 diamond to help provide some protection to the back 4 with one true DCM who can cover entry passes into the half-space.  Another adaptation that may be made is to require the wing players to sit extremely central in order to force play to the sidelines and have Harder help cover centrally, leaving Kerr up top in a low block very similar to a flexible 4-2-3-1.

These examples show just how disciplined Chelsea are out of possession and how their defensive shape can oftentimes be their best form of attack from transitional moments.  Emma Hayes has notoriously preached that managers don’t just teach the fundamentals/tactics of football, but they teach about the mentality it takes to win.  Her disciplined approach has yielded the lowest goals against average ever in the WSL which is no easy feat. Whilst they have missed out on a potential quadruple due to a ruthless performance from Barcelona in the UEFA Women’s Champions League Final, they continue to prove why they are one of the finest teams in the sport.