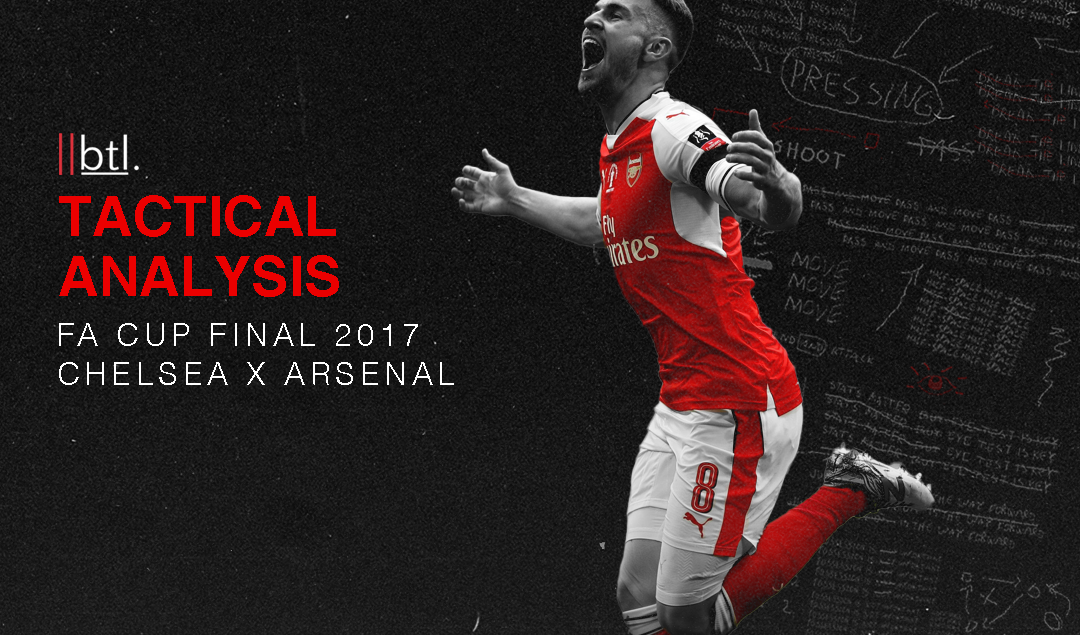 Three years ago, Arsenal took on Chelsea in the FA Cup Final, both sides coming into the game on the back of two polar opposite campaigns. Arsenal had failed to qualify for the Champions League for the first time in 21 years, finishing fifth, 18 points behind their West London rivals. Chelsea, on the other hand, had sprinted to the Premier League title in remarkably efficient fashion under new manager Antonio Conte.

Serious questions had been raised regarding Arsenal manager Arsène Wenger’s future at the club, with many fans claiming that, at 67 years old, his management style had become outdated and obsolete in comparison with his younger colleagues such as Mauricio Pochettino, Jürgen Klopp and Pep Guardiola. Nevertheless, what took place during the 90 minutes at Wembley Stadium was nothing short of prime ‘Wengerball’ in its mid-oughties glory and fame.

Arsenal went on to win 2-1 courtesy of goals from Aaron Ramsey and Alexis Sánchez, sealing the 17th and final trophy of Wenger’s time in charge. It’s been three years and two months, and Arsenal still haven’t won a trophy since that night in Wembley, but tomorrow, they have a chance to end their drought in the FA Cup Final against Frank Lampard’s Chelsea. Let’s take a look at the tactics that won Arsenal the 2017 FA Cup Final. 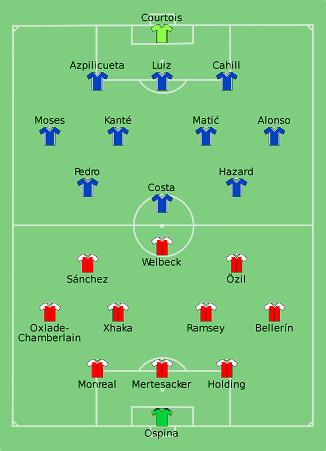 Both sides lined up in a 3-4-3/3-4-2-1 but with different shapes and approaches to the game. Diego Costa and Nemanja Matić would both start their final match for Chelsea before being sold to Atlético Madrid and Manchester United, respectively.

On the other hand, Alex Oxlade-Chamberlain started at left wing-back, his final match for the Gunners before leaving for Liverpool months later.

Arsenal decided to build in a 3+1 diamond shape (three centre-backs and one deep-lying playmaker in the form of Granit Xhaka).

The other central midfielder, Aaron Ramsey, was given the freedom to roam and float in between the lines along with Alexis Sánchez and Mesut Özil, both of whom were also given freedom to come narrow and roam. 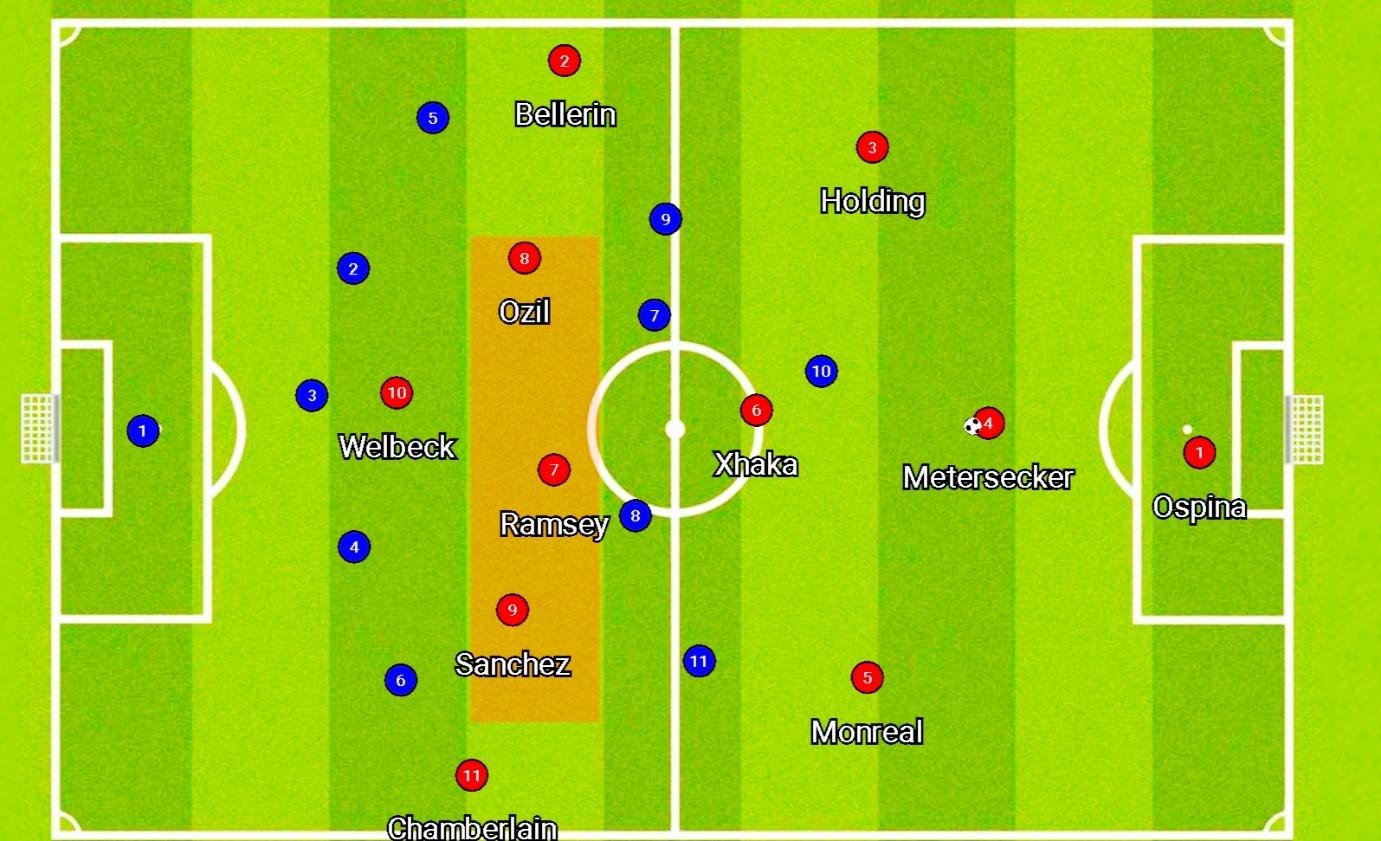 With Chelsea deciding to sit in a mid-block rather than pressing high, Arsenal were easily able to bypass the first line of pressure with a 3v1 (three centre backs against Diego Costa). After doing so, they would then look to build play through Granit Xhaka.

Chelsea tried to stifle their build-up by using one of their midfielders to step out to press Xhaka as soon as he received the ball. However, this would leave a gaping hole in Chelsea’s midfield which was exploited by Özil and Sánchez. 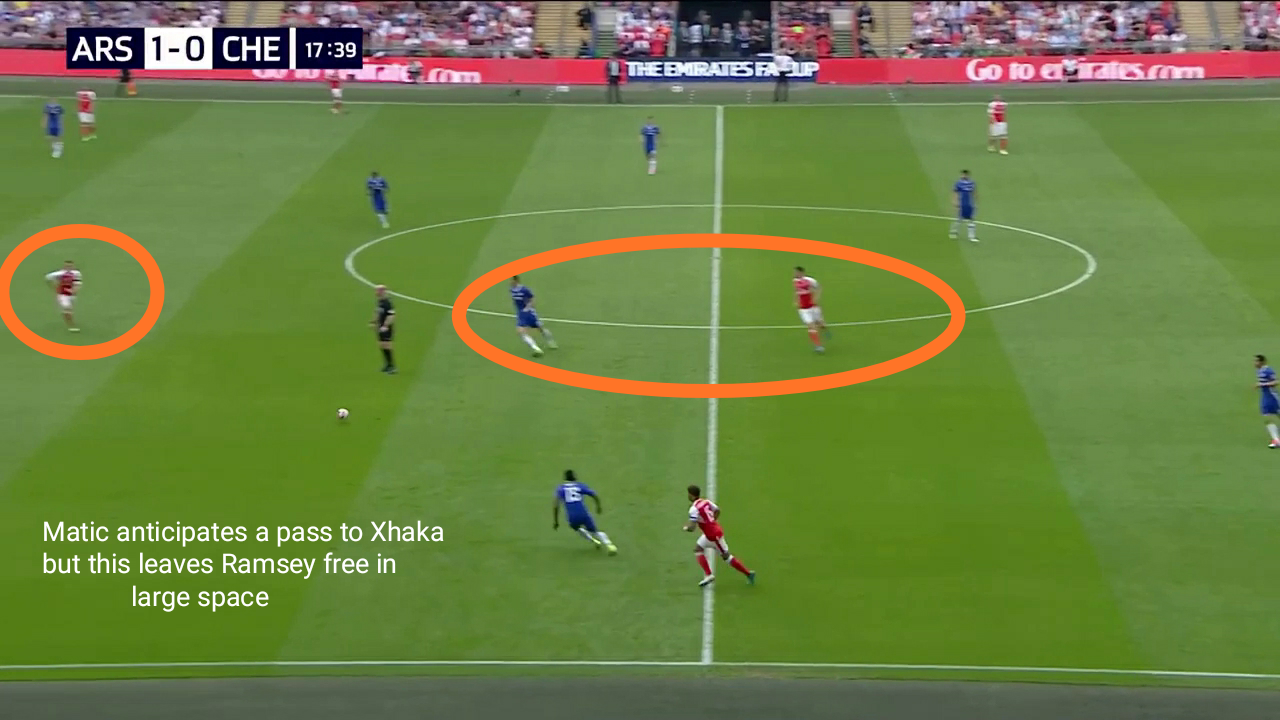 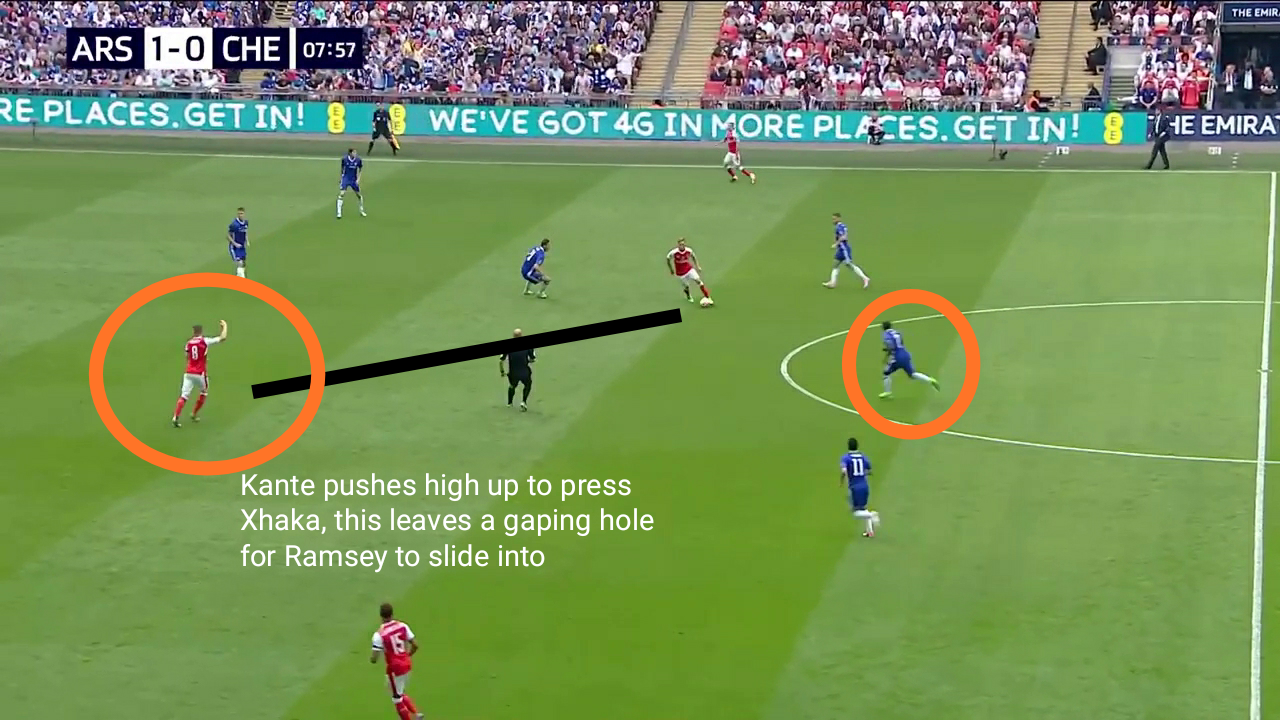 Oftentimes, Chelsea’s midfielders (Nemanja Matić in particular) were too slow to press that they afforded Xhaka with ample time and space to turn and pick out the pass himself. 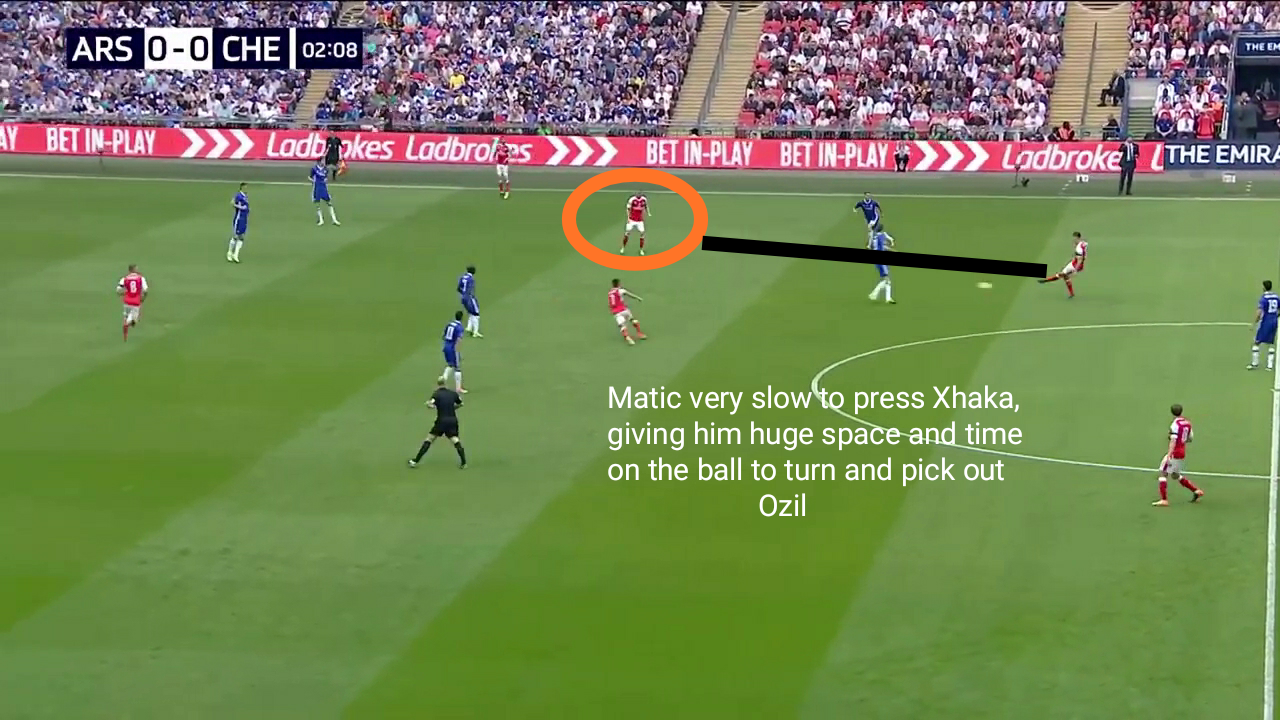 Mesut Özil’s Masterclass in Between The Lines

In order to cover the gaps that arise between the defensive and midfield lines in a back three, wide centre backs are often encouraged to cover the hole by stepping up to press aggressively.

However, Özil’s intelligence supplemented by Danny Welbeck’s smart positioning and Aaron Ramsey’s late runs into depth from midfield created a conundrum for Chelsea’s wide centre back (Gary Cahill in particular) as to whether he should step up to cover up the gap, thus leaving a huge space in behind which could be exploited by Welbeck or Ramsey’s runs or Özil’s passes. 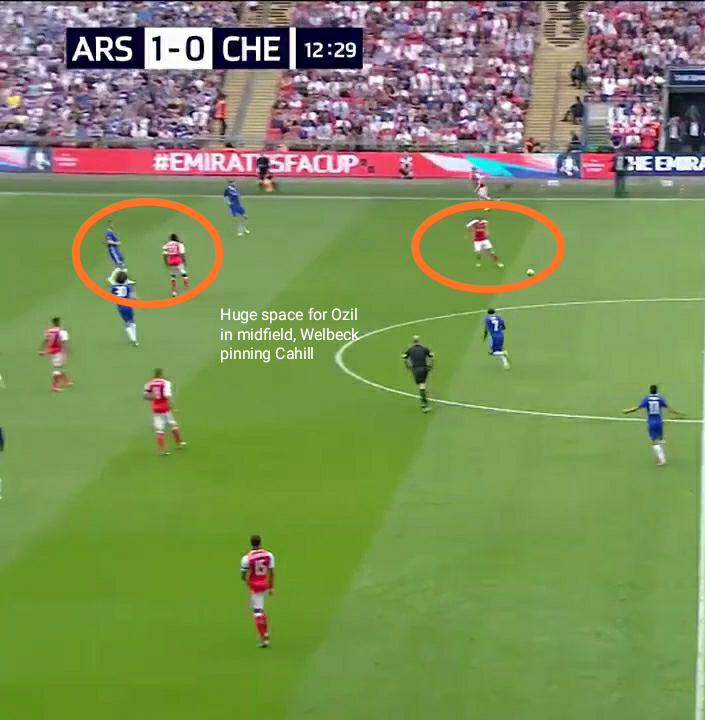 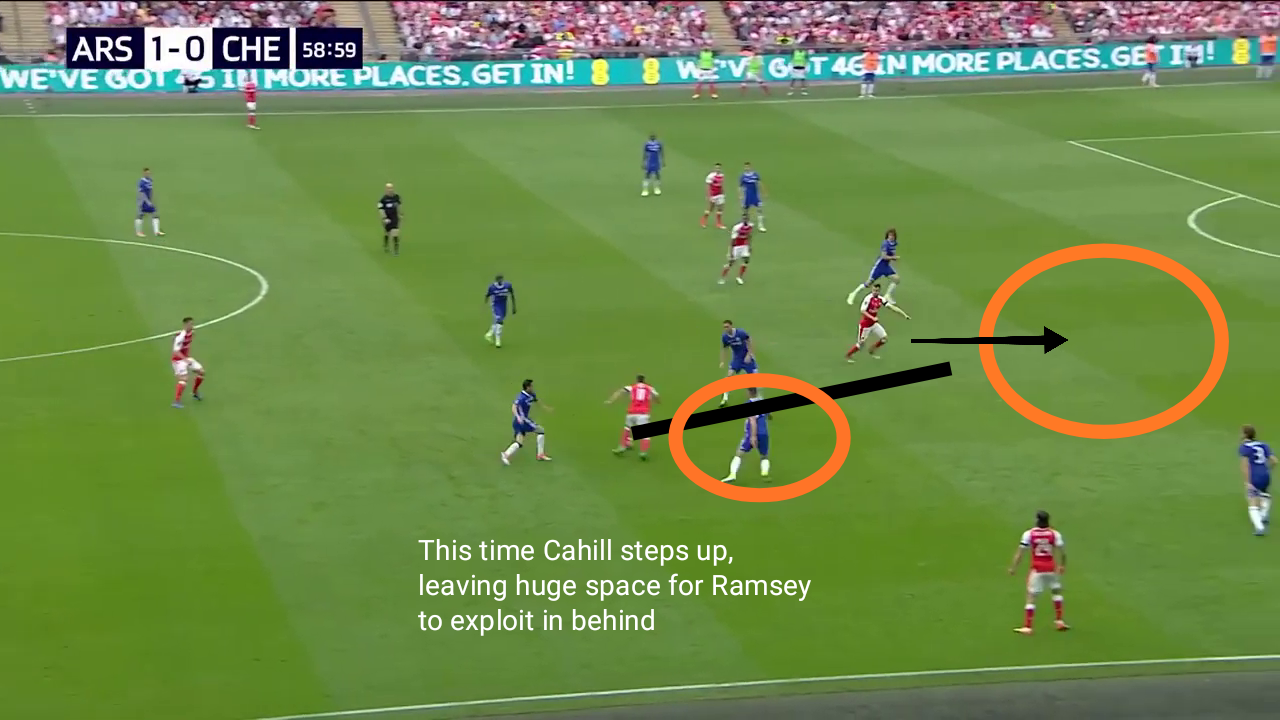 Unlike Chelsea’s conservative approach, Arsenal were far more aggressive in their press, with their midfield and defensive lines pushing up aggressively to support the high press. 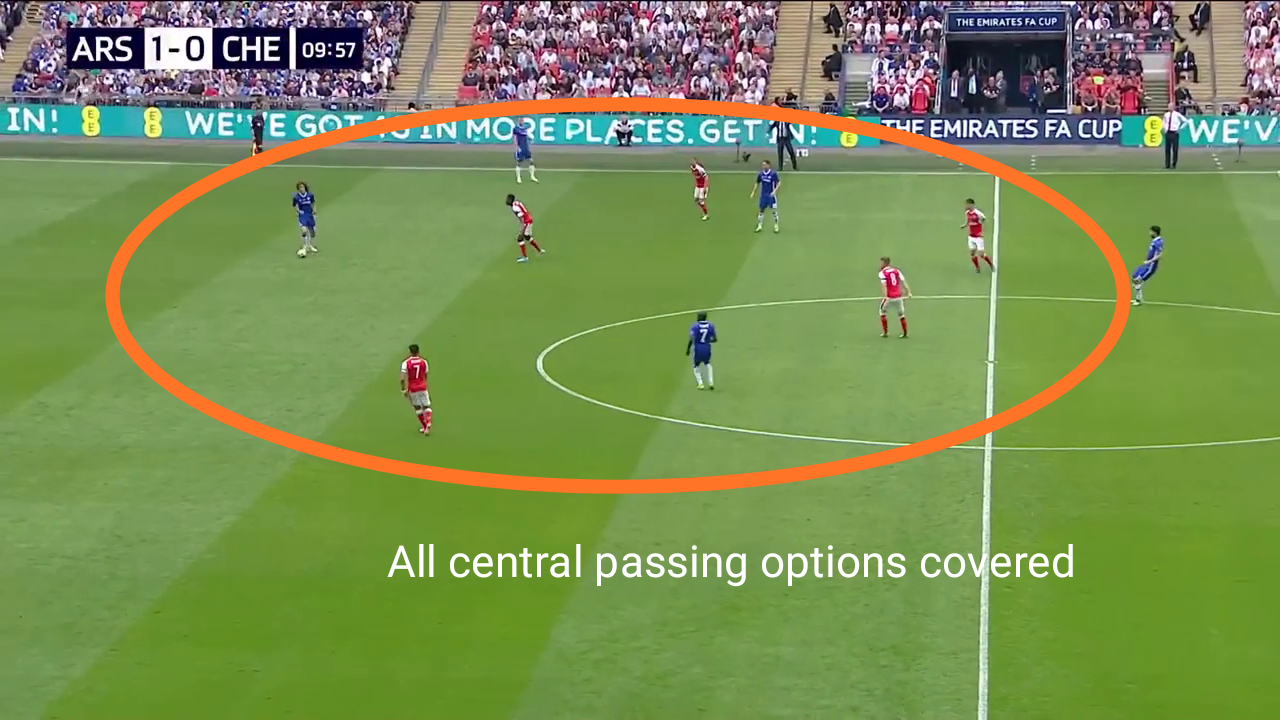 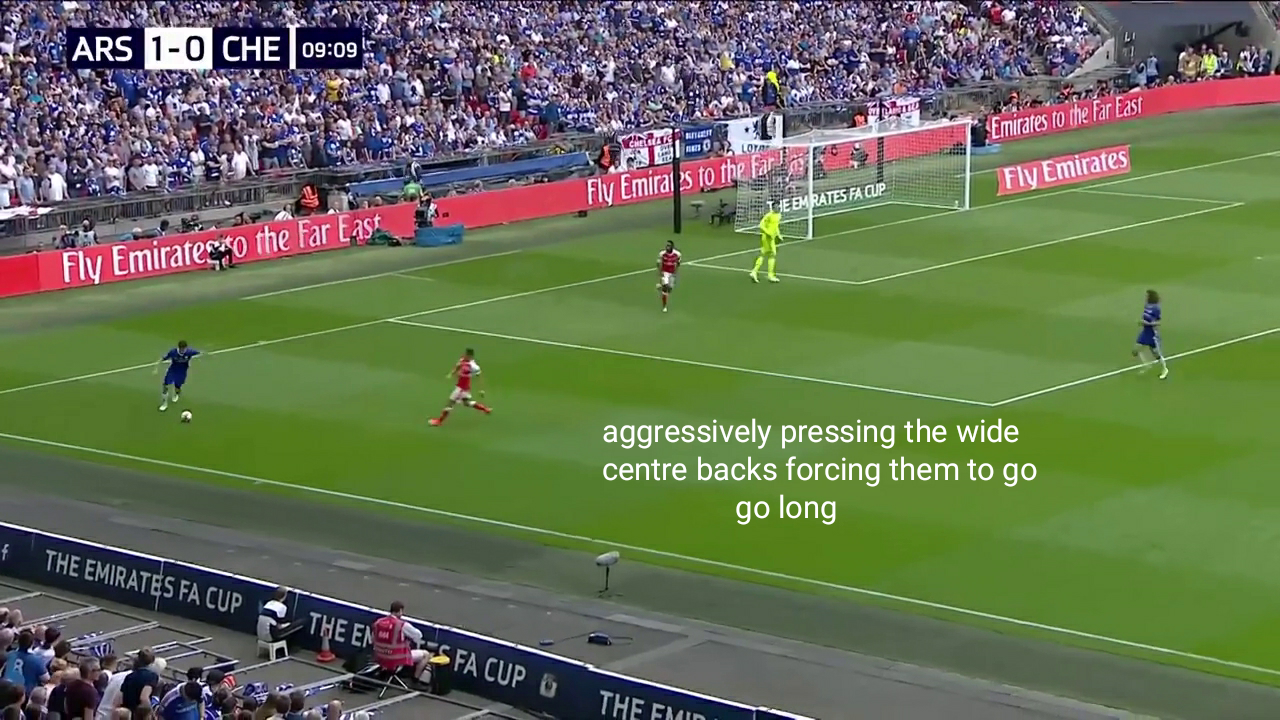 With their short passing options covered, Chelsea was forced to play direct balls into the front three, specifically using Diego Costa as a target man. But due to Eden Hazard’s and Pedro’s narrow and deep positioning, Costa was often left isolated in attack. 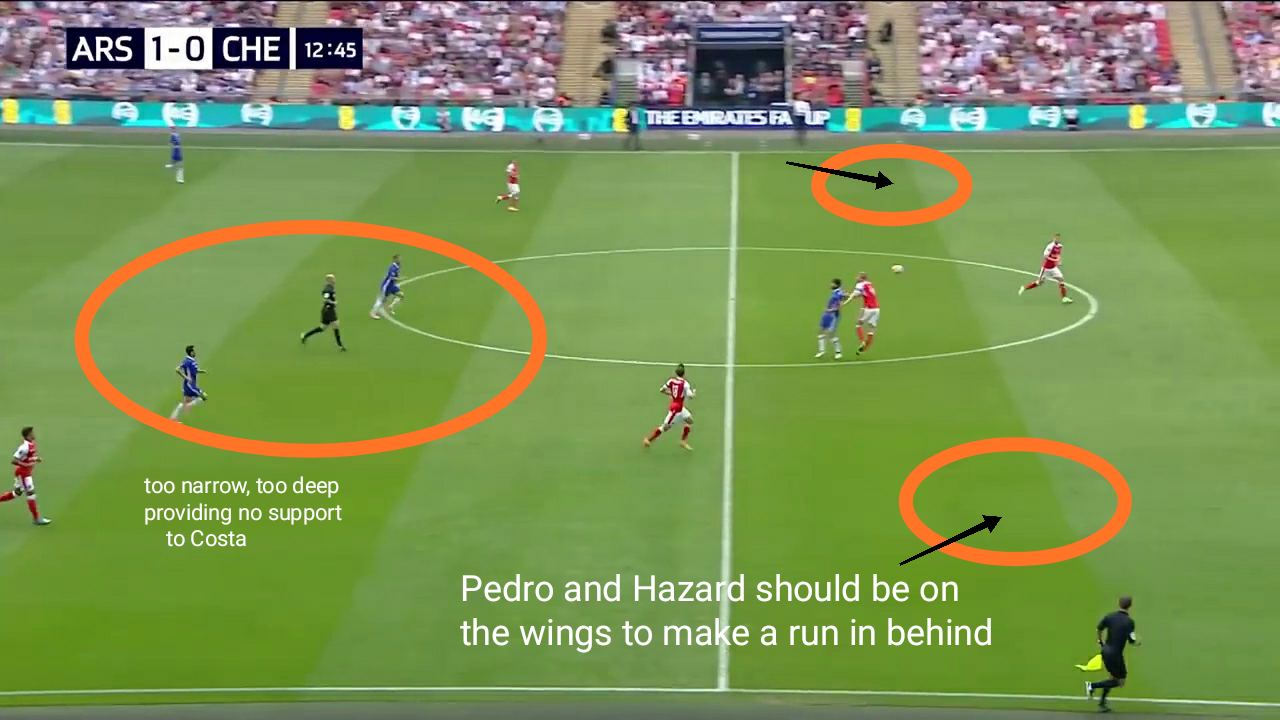 Arsenal’s back three of Nacho Monreal, Per Mertesacker and Rob Holding were fairly impressive in winning their individual duels.

Against all odds, the 32-year-old Mertesacker delivered a man of the match performance in what would be his sole start of the 2016/17 season. His awareness and reading of the game was crucial for Arsenal as he made some important clearances and last ditch tackles. 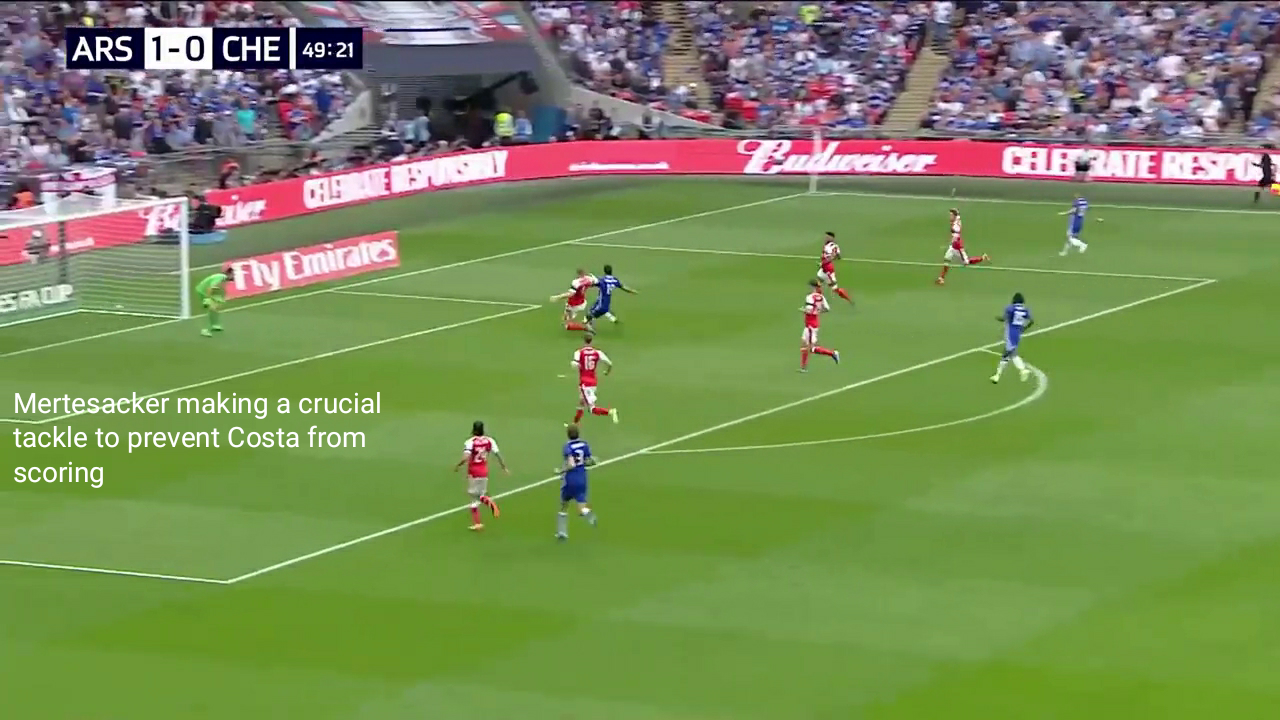 Aaron Ramsey Seals It For Arsenal

Despite dominating most of the match and even having a man advantage after Victor Moses was sent off for diving, Arsenal still found themselves level with Chelsea at the 80th minute mark. But Aaron Ramsey, the hero of the 2014 FA Cup Final, sealed the tie with his traditional late run into the box from midfield to head home from close range. 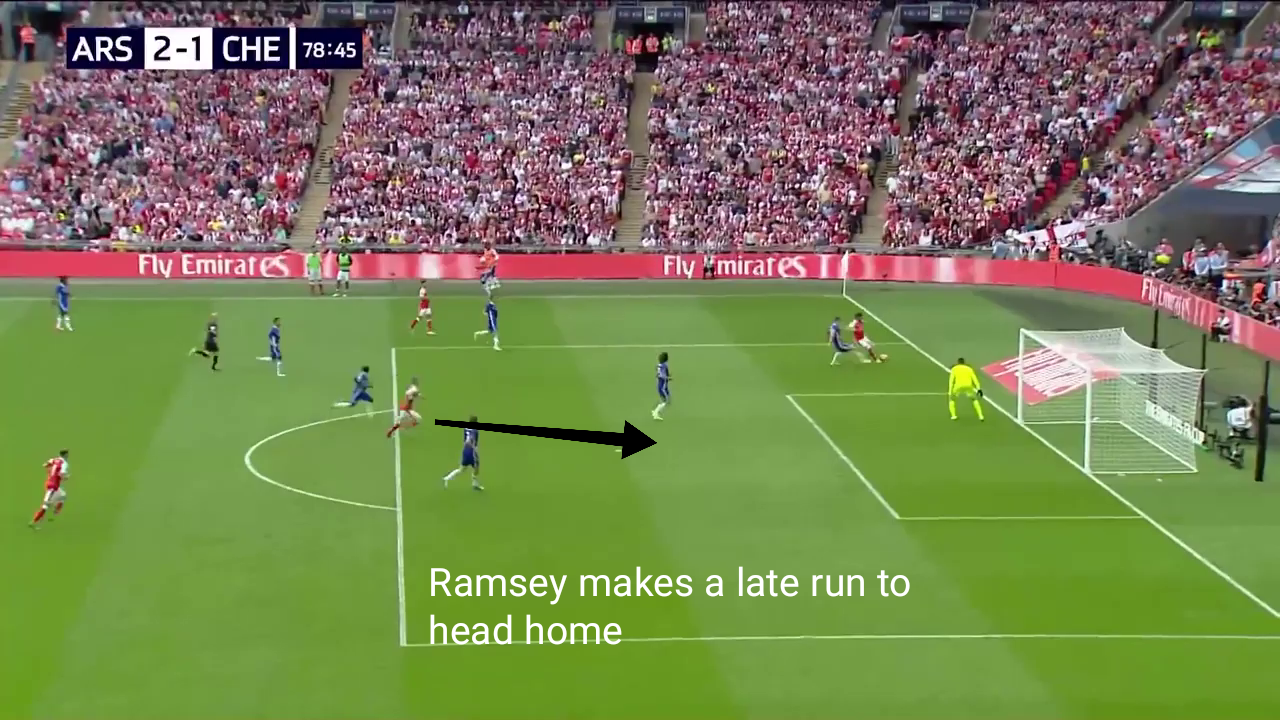 One of the fine displays of ‘Wengerball’ sealed Arsenal’s 13th FA Cup victory. It also led to Arsenal giving Wenger a new two year contract, despite a large section of fans calling not to do so.

Wenger finally left at the end of next season but Arsenal’s struggles have only worsened over the past three years. There is a sense of optimism with former captain Mikel Arteta as the manager, but in order to take the sting off an embarrassing 8th-place finish and seal European football for next season, the Gunners will have to repeat their heroics at Wembley from three years prior.