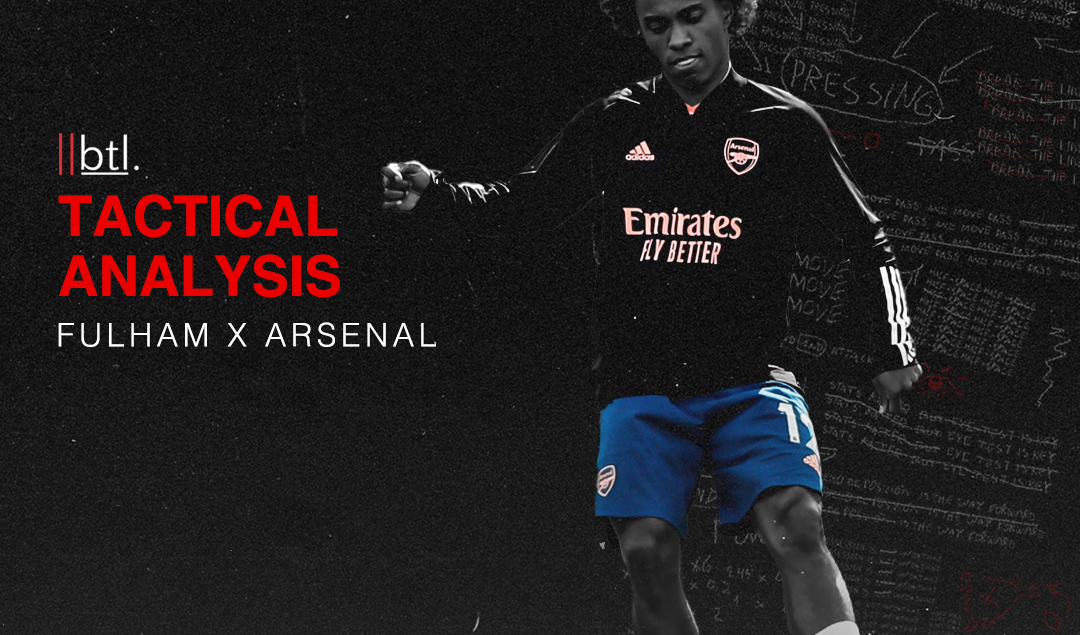 In the first match of the 2020/21 Premier League campaign, Mikel Arteta’s Arsenal defeated Scott Parker’s Fulham in a resounding 3-0 victory. Let’s take a look at the tactics behind the maiden game of the season. 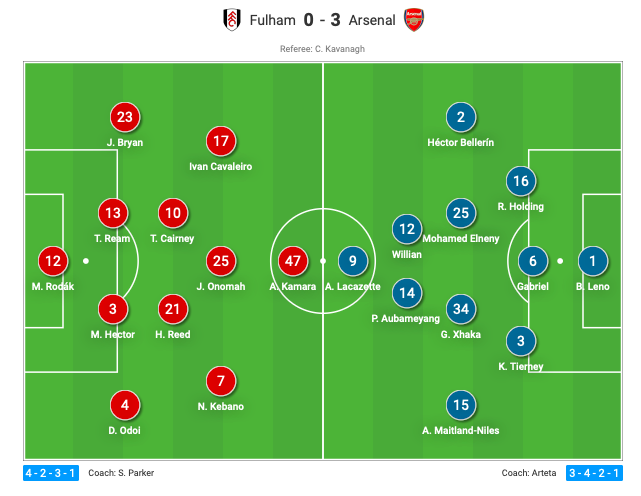 During the end of the 2019/20 campaign, Arsenal played their best football within a 1-3-2-5 formation during possession. Kieran Tierney was deployed as an overlapping center back, whilst Ainsley Maitland-Niles operated as an inverted left wingback.

At Craven Cottage, the team’s shape became more lopsided with Tierney playing within the left flank and Gabriel Magalhães in the left half space. This made the left side overloaded and the right underloaded, making switches of play very effective as the player receiving had space to exploit.

Against Fulham’s 4-4-2 out of possession, things did not start as planned; whenever they received the ball, Gabriel and Tierney would not be supported by the movements of the forwards to allow vertical distribution.

Pierre-Emerick Aubameyang was always positioned up the pitch, occupying either Fulham’s right back or right center back, but never dropping deep to receive. Similarly, Maitland-Niles would not offer himself  as a playing option, being positioned high in the left half space, causing their progressive passing to struggle.

In the example below, Tierney receives a pass from Gabriel, Tierney immediately looks to the open space in front of him, anticipating a forward to be moving into it to receive a short pass, but his only option is to pass backwards back to Gabriel.

On one occasion, Tierney attempted to play the ball long in behind to Aubameyang, but that strategy cannot be relied upon. This lack of movement off the ball resulted in less penetration as Arsenal struggled to reach the attacking third. Early in the game, they had zero shots and only two passes in the attacking third up until the sequence in the eighth minute that broke the deadlock for them.

Maitland-Niles started to drop deep into the left half space, making a dummy movement toward Gabriel when he received the ball, attracting the attention of Fulham players around him as they tried to compress the space with which the wingback could receive. This allowed Tierney to receive the ball in space and carry it forward. From here, the Scottish left back was able to make a pass inside and the sequence would end with a goal. 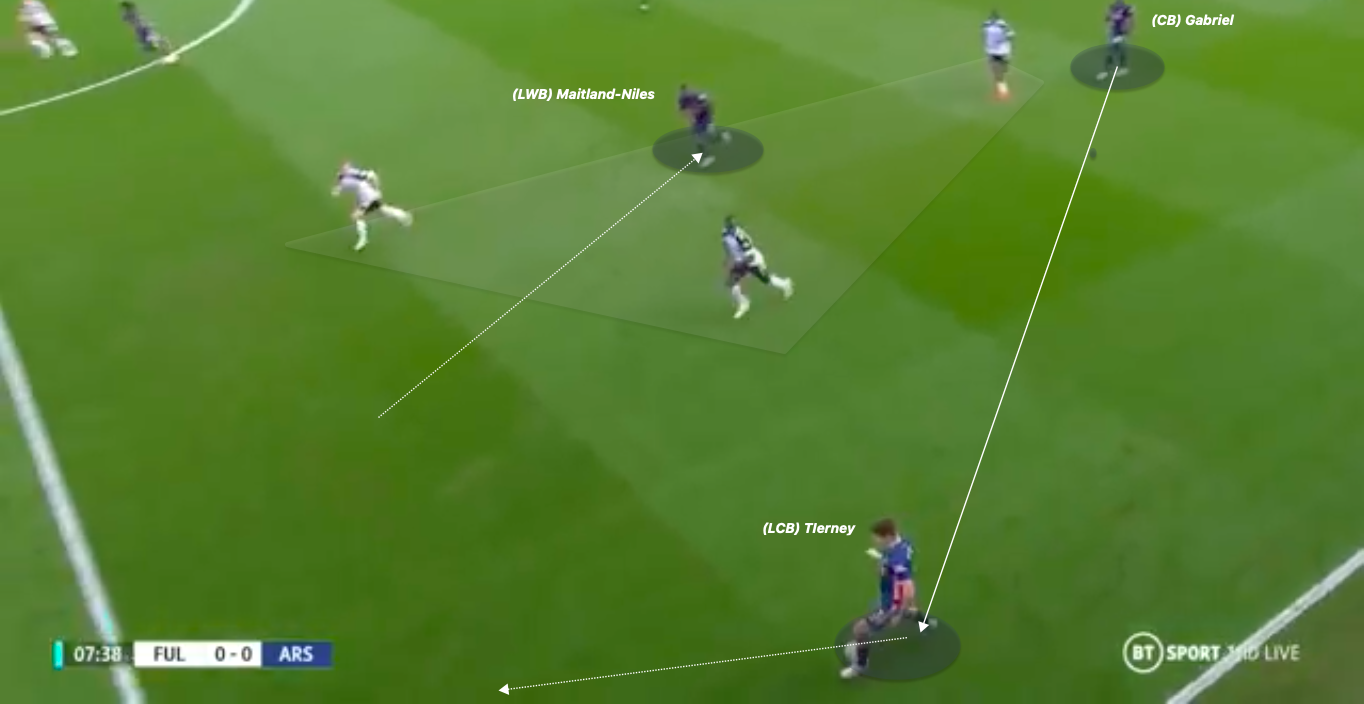 Again, the newly capped English international makes the same movement within the zone. This time, Granit Xhaka drops into the defensive line and Tierney is allowed to come forward. Due to Tierney’s position, Fulham right back Denis Odoi has to come out and meet him, thus stretching the defensive line.

This leaves Fulham’s right-sided center back Michael Hector isolated against Aubameyang, and Xhaka can utilize his excellent passing range to pick out a pass from deep and find Aubameyang in space, like Tom Brady finding a wide receiver with an inch-perfect Hail Mary pass.

The more movement from Arsenal, the more Fulham’s backline struggled. Here, Odoi is dragged wide by Tierney, whilst Aubameyang and Maitland-Niles make positional rotations. Maitland-Niles drops deep, dragging Hector with him and opening a sizable gap to exploit.

Alexandre Lacazette recognizes this gap and makes a run toward it, before being found by Aubameyang, who plays a pinpoint through ball. Arsenal would end the game with an xG of 2.47 in large part thanks to the players’s movements to disorient the opposition defense.

Parker made the naïve mistake of instructing his Fulham side to press high in a 4-4-2, rather than sitting back and forcing Arsenal to break down the deep block. This high pressing strategy may have worked wonders in the Championship, but in their first Premier League match in 16 months, it left them at a numerical disadvantage against Arsenal.

Mohammed Elneny would often drift between the two center backs within their own box, allowing Arsenal to enjoy a makeshift back three at times; whenever Bernd Leno stepped forward, Arsenal could enjoy a 4v2 against Fulham’s attacking duo of Josh Onomah and Aboubakar Kamara. With Willian moving into the right half space and Maitland-Niles shifting inwards, they could also enjoy a 3v2 against Fulham’s midfield. 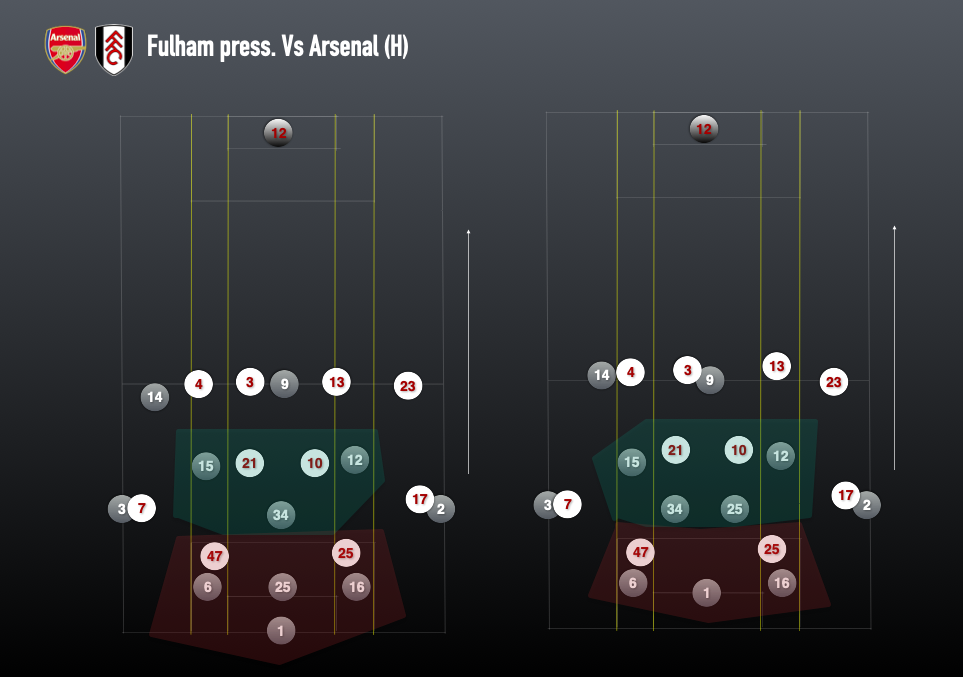 As the match went on, Fulham became more aggressive in their press, opening up more space for Arsenal to attack and creating more problems on the defensive end. In Arsenal’s third goal, they played through the press with ease and found their forwards in a 6v3 situation with the defenders backpedaling.

Although things did not go well for Fulham when defending against Arsenal, there were some bright spots in possession, as they were able to play through Arsenal’s 3-4-3 press with quick one-touch combinations. Similarly to Arsenal through their deep positioning within their half, they attempted to open space further up the pitch by attracting pressure from the opponent.

It would start with the goalkeeper Marek Rodák who would play a long pass at times to Odoi, the right back. This would make Maitland-Niles engage Odoi after receiving the ball, who would then look for Harrison Reed near midfield, who then would find Neeskens Kebano dropping to receive with his back to goal.

These sequences were frequent but they would rarely be taken fully advantage of. Later in the match Aleksandar Mitrović would be subbed on and he would operate as a target man during goal kicks to bypass Arsenal’s press with one pass from Rodák.

Once reaching the attacking third, Fulham’s lack of collective quality would be on full display. Their shape shifted to a 1-2-4-4, naturally making an emphasis on stretching Arsenal’s 5-2-3. Once the ball went wide, Onomah would shift to the ball-near side in an attempt to assist the fullback and forward on that side. But naturally they would be playing through a 3v4 here, hence limiting their passing angles and space.

Meanwhile, the ball near midfielder would be positioned in the flank while the other midfielder would occupy the half space. In doing so, they always had the potential to play backward and find an outlet to switch the point of attack. But playing at such a slow tempo and with a lack of supporting movement caused them to struggle to retain possession and find space. Here, Tom Cairney receives but no forward drops into open space to provide a quick passing option.

Mikel Arteta will be pleased with the resounding victory and the three points, but he’ll be even more pleased to see new signings Willian and Gabriel fit into his system as if they had been there for years. On the other hand, Parker will be looking to learn from his team’s mistakes in order to avoid the fate of 2018/19, when the Cottagers were relegated to the Championship.