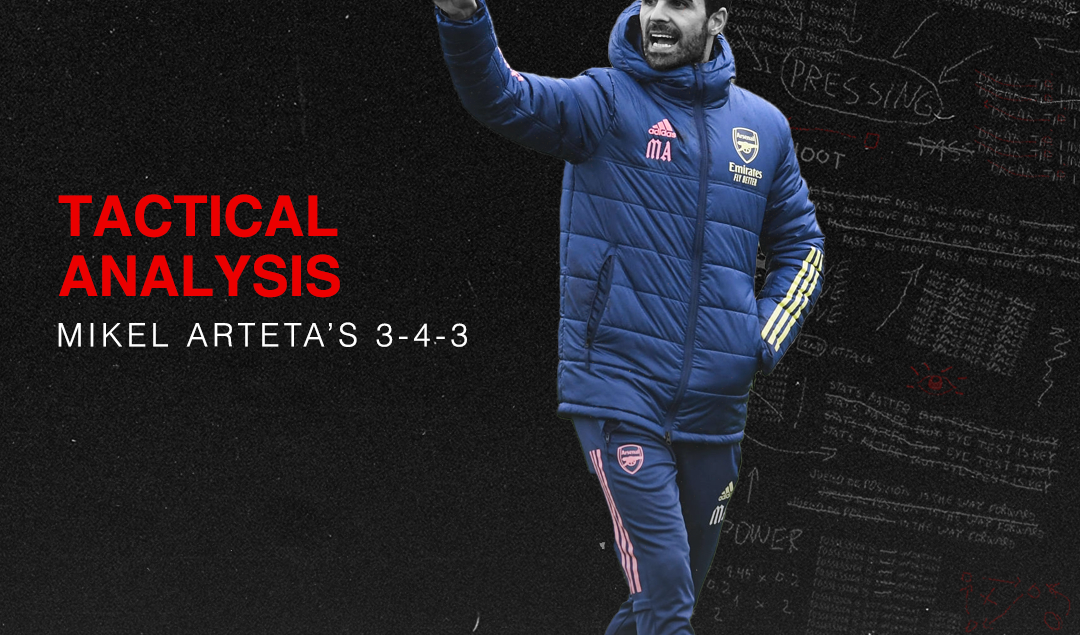 Mikel Arteta has had a promising start to life as Arsenal manager since leaving his post as Pep Guardiola’s assistant at Manchester City and taking over on December 20, 2019. Most notably, Arsenal have massively improved in games against their top 6 rivals. After starting with a 4-2-3-1, Arteta has switched to a 3-4-3 and has stuck to it.

He won the FA Cup with a 3-4-3 in a run that saw Arsenal defeat Manchester City out in the semi-finals and beat Chelsea in the Final. He also led Arsenal to victories over Liverpool and Manchester United in the league, although Arsenal still finished in 8th place, their worst league finish in 25 years.

Despite a fairly impressive record against his top 6 rivals, Arteta has yet to prove he can consistently beat the bottom 14 teams in the Premier League, teams that sit back and remain compact and attempt to hit Arsenal on the counterattack.

At first, Arteta used a more typical 3-4-3, pushing his wing-backs high and playing with inverted wingers, but as time has passed, this system has proven to have difficulties when it comes to breaking teams down. The main issue with the 3-4-3 is that it lacks a clear link between midfield and attack.

The system doesn’t have a #10 (as seen in the 4-2-3-1) or #8s (as seen in the 4-3-3) that naturally connect midfield and attack. Although Alexandre Lacazette (or whoever played at #9) would drop into midfield at times, they still lacked penetration in the final third. 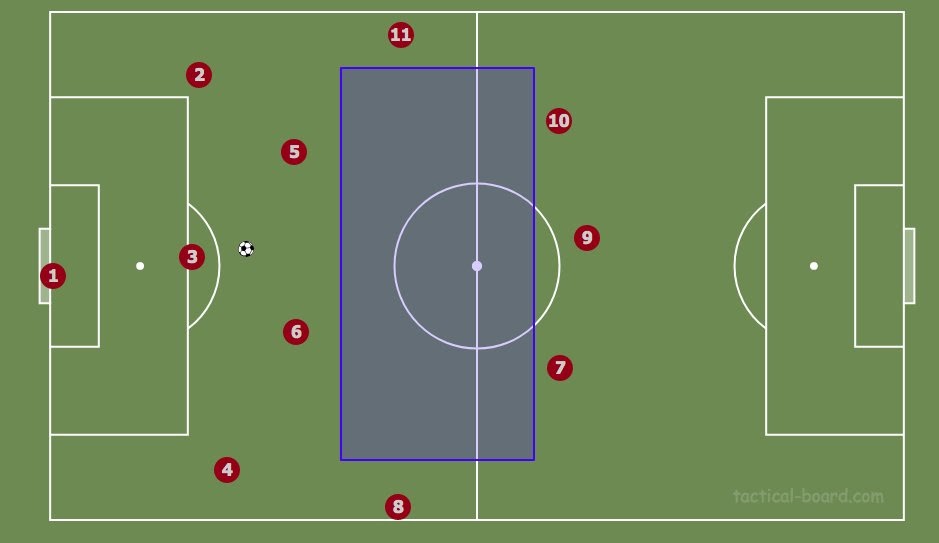 There is no natural presence in the highlighted zone; the 3-4-3 lacks a natural link between midfield and attack.

Here is Nicolas Pépé’s disallowed goal vs. Chelsea in the FA Cup Final. Ainsley Maitland-Niles inverts and occupies the left side of Chelsea’s defence (Reece James and César Azpilicueta). Kieran Tierney (who is playing at left centre-back) pushes up on the left flank which gives Pierre-Emerick Aubameyang the opportunity to take up a position in between the lines.

Arteta is constantly tweaking his system, but to get an accurate depiction of his current tactics, let’s analyze Arsenal’s match vs. Sheffield United on October 4. 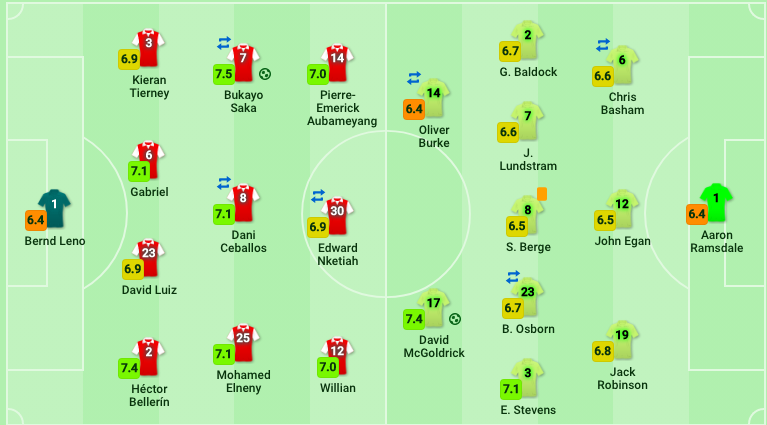 As we can see in the below image, Arsenal defend in a 5-4-1 against Chris Wilder’s side, with Eddie Nketiah and Willian occupying the wings.

Whilst Arsenal operate in a 5-4-1 out of possession, they use a different formation when in possession. Arteta has changed his build-up from a 3-2 structure (made up of the back 3 and the double pivot), to a 3-1 structure. This involves Kieran Tierney pushing up and leaving the back 3 which means one of the pivot (Mohamed Elneny in this match) drops to make a back 3. 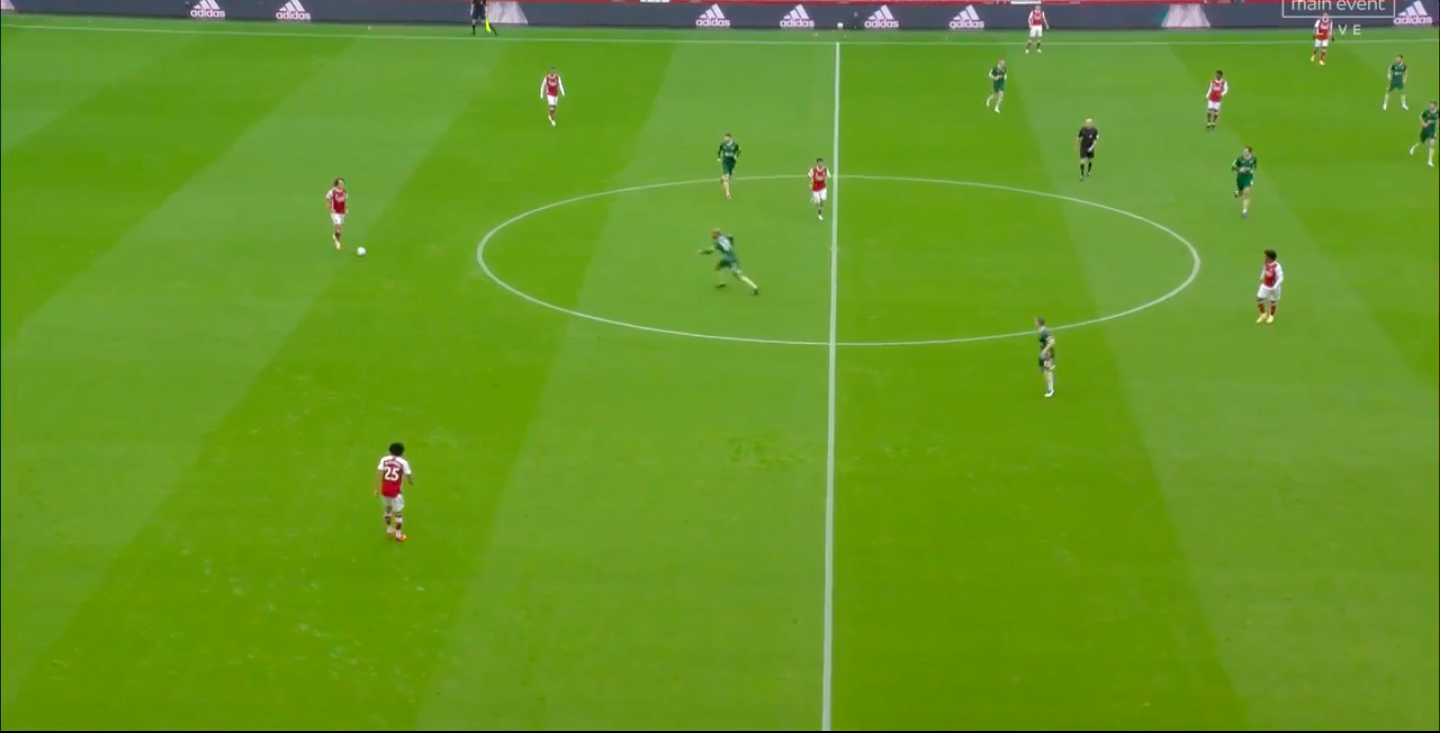 Another thing to note is Willian’s position; he takes up a number 8 position in the build-up. Bukayo Saka inverts his position which means Dani Ceballos, Willian and Saka create a midfield 3. Héctor Bellerín (who is out of shot) is on the right touchline in the above picture. 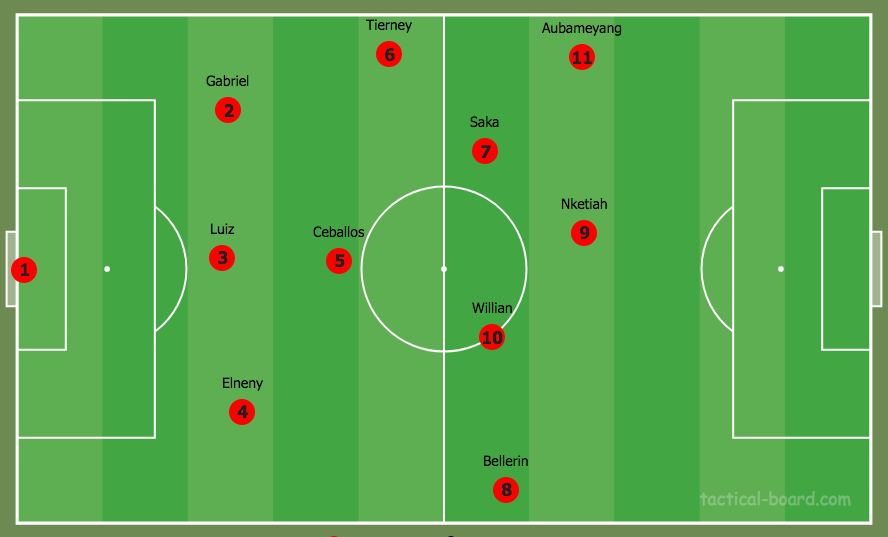 This is the structure that Arsenal utilize when they have the ball. The system forms triangles in the wide areas (especially down Arsenal’s left side), similar to Guardiola’s 4-3-3 at City. Willian and Saka are #8s which provide Arsenal a link between midfield and attack. 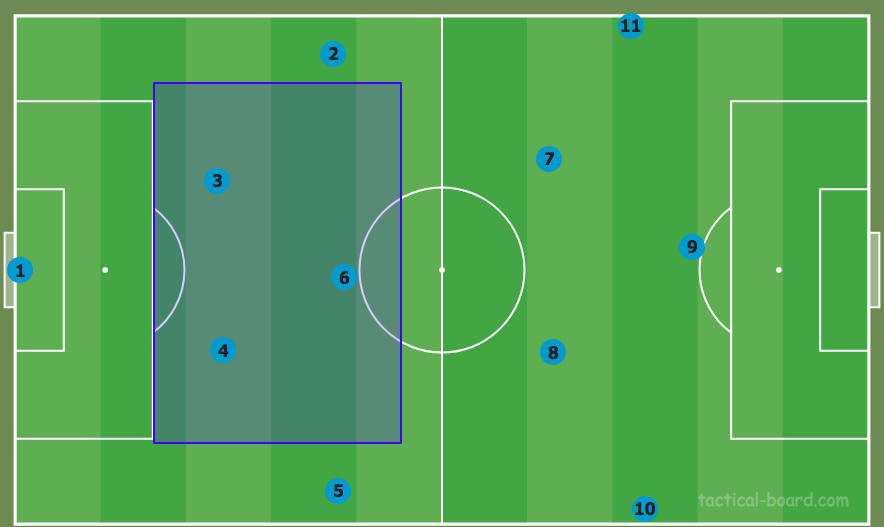 The main difference between Arsenal and City’s midfields is that City have 3 players in the highlighted zone whereas Arsenal have 4 players in this central zone. This means that Arsenal have more protection in this area which should therefore make them better at defending transitions. It also means that Arsenal lack 1 player further forward in comparison to City’s 4-3-3.

In the first half of their game against Sheffield United, almost all of Arsenal’s play went down their left side. They had one successful attack (which resulted in a cross) down their right flank. The fact that they had more players on their left flank and, to a lesser extent, the fact that Aubameyang (their best forward) was playing on the left caused this heavy left-sided focus. 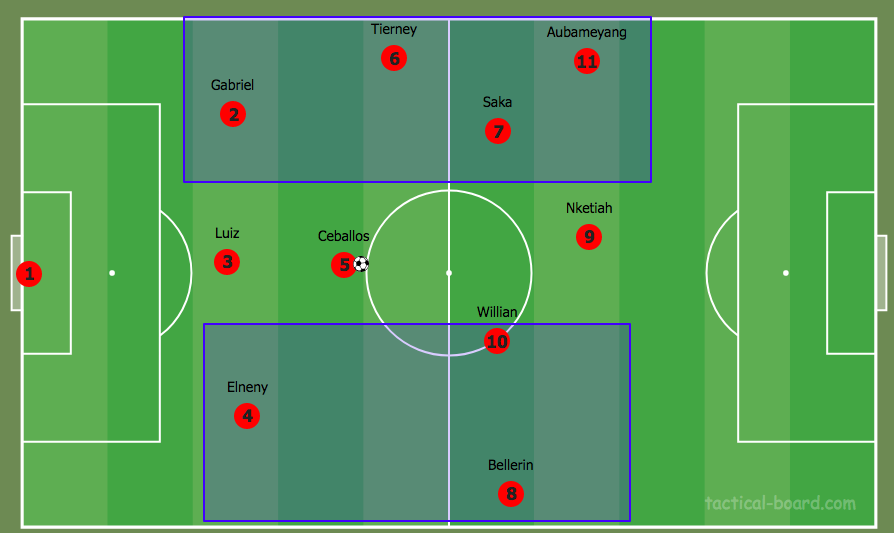 Arsenal overload their left side with 4 players, in contrast to 3 players in the middle of the pitch and 3 players on the right flank.

Here’s an example of Arsenal overloading their left flank, as five players flood the right side of Sheffield United’s defense. 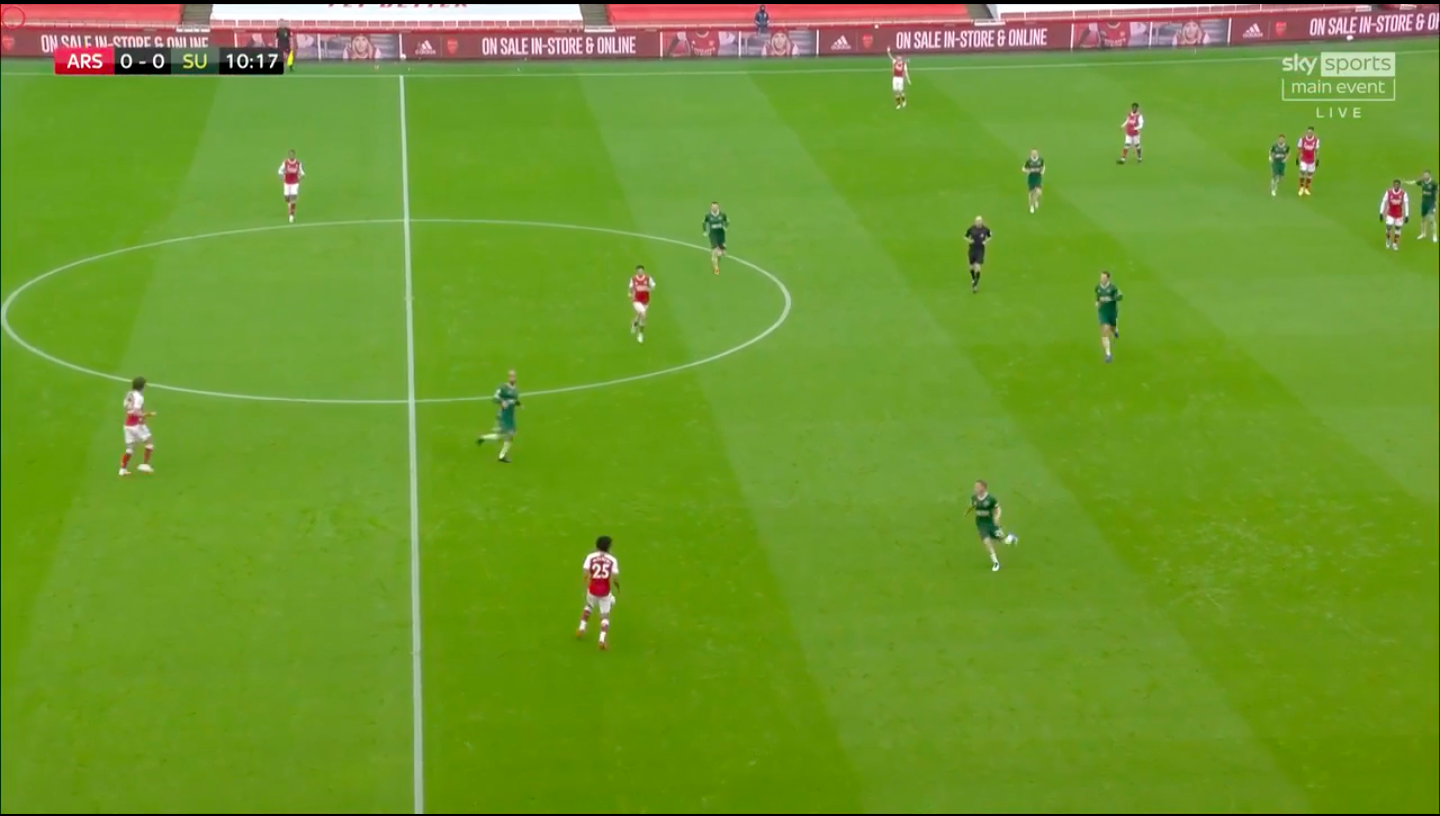 In desperate need of a goal to break the deadlock, Arteta made a slight adjustment at half time. More of Arsenal’s attacks were focused down their right flank in the second half, and Elneny ventured forward slightly more. In the 58th minute, Arteta took Nketiah off for Pépé, which in turn changed the roles of the front three and the wing-backs. 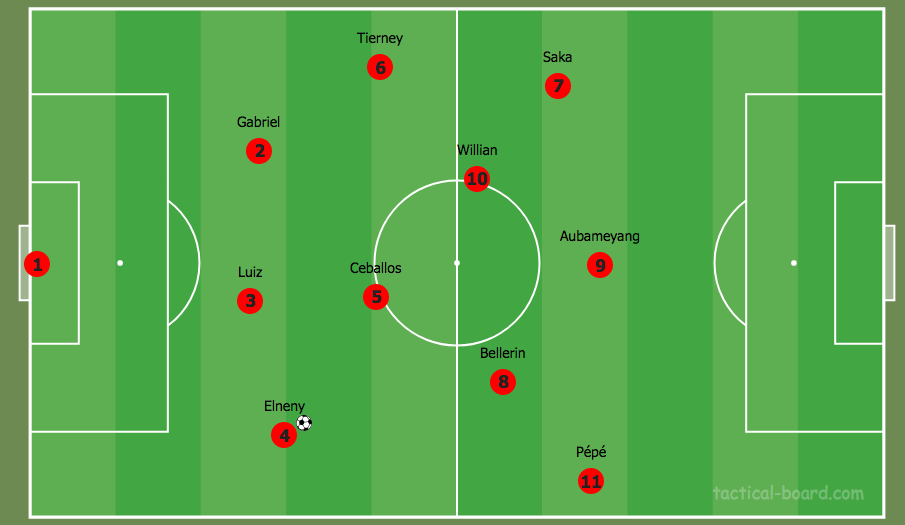 Arsenal’s first goal: Elneny makes a run from deep to join the attack. He isn’t tracked and he takes advantage to provide Arsenal with the breakthrough. Arsenal overload the right flank here as Willian has drifted to the right.

A Possible Way Arteta Can Maintain His Overload on Both Flanks 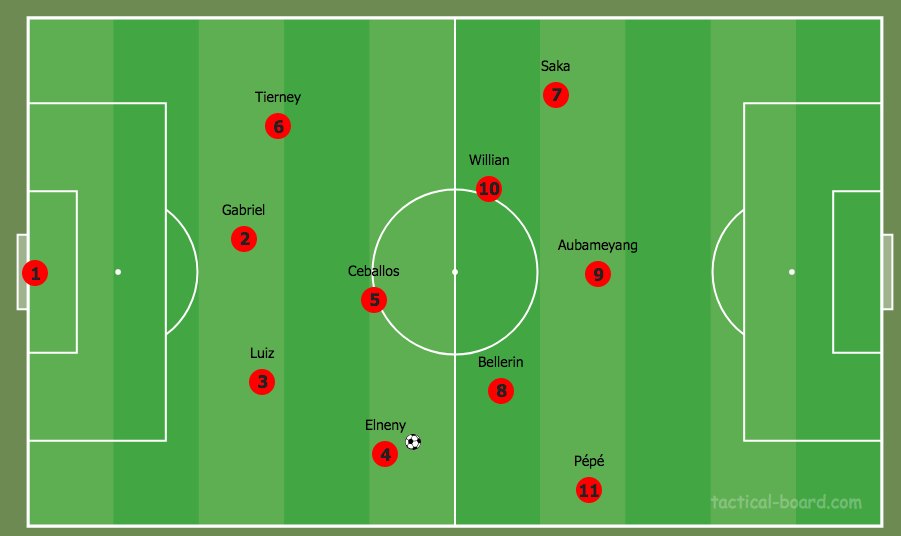 This set-up (positionally) creates an overload on the right. Arsenal could rotate between their usual set-up depending on where they’re attacking. It would mean they always have an overload when they attack in wide areas.

However, this would also require a lot of physical output to constantly switch positions.  This variation of Arteta’s 3-4-3 is relatively new so Arsenal’s next few games should tell us more about the strengths and weaknesses of this system.

Mikel Arteta is clearly focusing on using width and creating overloads in the wide areas whenever possible in order to break opponents down. Like his former mentor Pep Guardiola, this latest system focuses on having players in the half-spaces. However, key difference between the systems is that Arteta has opted for 4 players defending central areas rather than the 3 that Guardiola employed.

Given how Guardiola’s 4-3-3 has leaked goals in recent years, it makes sense for Arteta to focus on shoring up Arsenal’s leaky defense, but as seen in Saturday’s defeat to City, he still needs to tweak his system in order to find the right balance between attack and defense and find a groove that can help Arsenal break down opponents in possession.