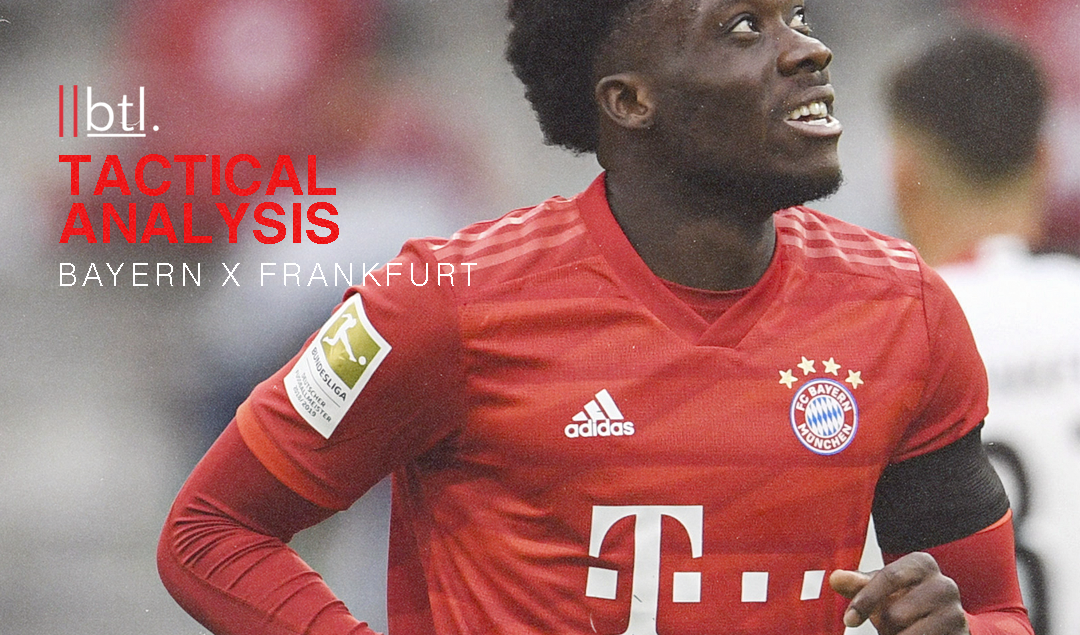 After for the first time in two months last weekend, the Bundesliga resumed play for Matchday 27. In the earlier kick-off, Bayern Munich’s nearest title challengers Borussia Dortmund continued their scintillating form with a hard fought 2-0 away win at Europa League hopefuls Wolfsburg.

Thus, it was up to Bayern to maintain their four-point gap at the summit of the league and keep up their momentum from last weekend’s victory against Union Berlin. The Bavarians hosted an out-of-sorts Eintracht Frankfurt side, who came into the game on the back of four consecutive Bundesliga defeats, with the most recent being a 3-1 home defeat to Borussia Mönchengladbach last Saturday.

In this article, I will analyse how Bayern dismantled Frankfurt to maintain their lead over Borussia Dortmund at the top of the Bundesliga. 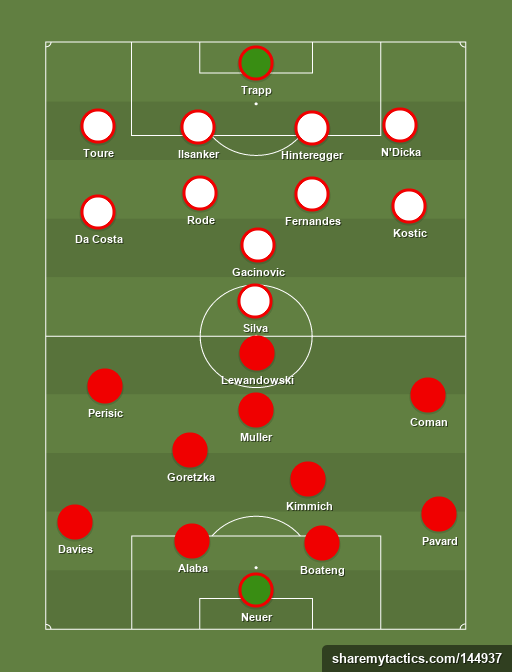 Hansi Flick made two changes to the side that defeated Union Berlin last Sunday; Ivan Perišić and Kingsley Coman came in at the expense of star players Thiago and Serge Gnabry, who dropped to the bench.

On the other hand, Frankfurt manager Adolf Hütter made four changes in an attempt to breathe new life into his out-of-form side. Out dropped David Abraham, Djibril Sow, Daichi Kamada and Bas Dost; in came Gelson Fernandes, Mijat Gaćinović, André Silva and Danny Da Costa.

Bayern Expose Space Between the Lines

In the first half, Frankfurt pressed high in numbers whenever Bayern were building in the first third. This was a stark change from last weekend’s affair, where Hütter opted for a more conservative approach, with Eintracht sitting deep in a 4-1-4-1 shape and attempting to minimise the space between the lines.

However, as Bayern have a tendency to carefully progress the ball from the first phase into the second phase on the ground, Hütter saw this as an opportunity to press high and attempt to win possession in dangerous positions. 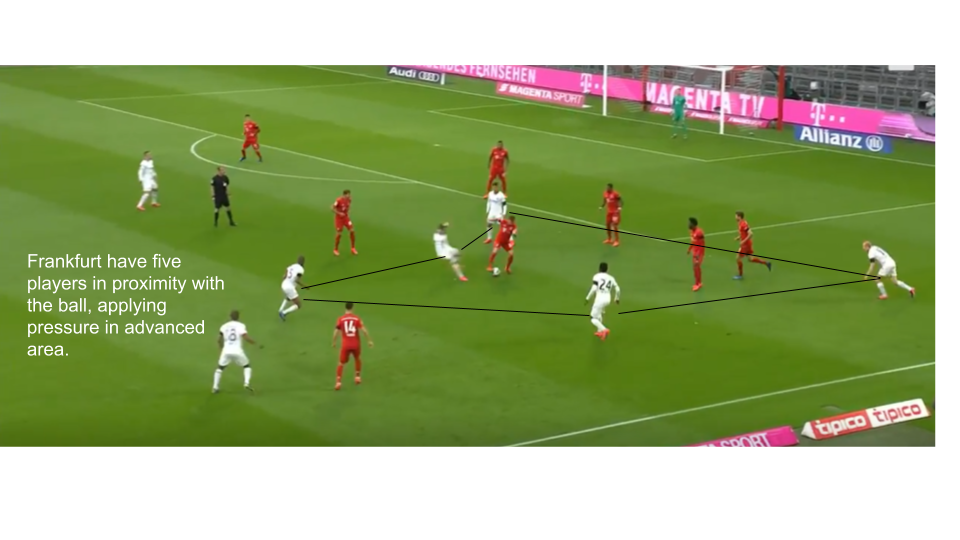 However, due to Bayern’s superior individual quality, they were able to play out of the Frankfurt press with relative ease and progress the ball into advanced positions. As the Frankfurt midfield abandoned their positions to join the press, gaps between their defence and midfield began to appear, which were promptly exploited by Bayern.

Pressing high can be effective if it is performed as a unit, with space between the lines being minimised and allowing the pressing team to remain compact.

However, in this case, the Frankfurt defensive line remained deep, thus opening up a substantial amount of space in between the lines. This meant Bayern could simply progress the ball without much adversity. 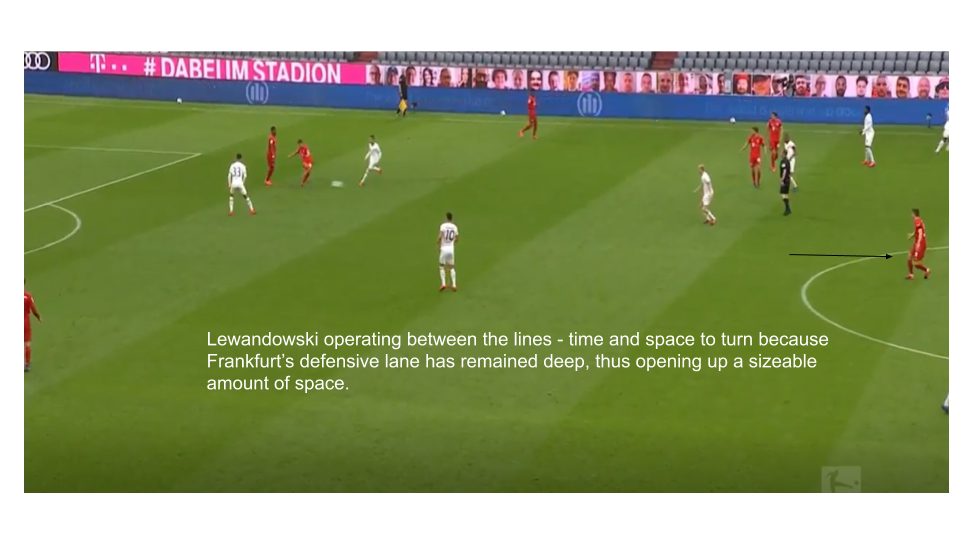 Even when Frankfurt did retreat and settle into their 4-4-1-1 shape out of possession, there was still too much space between the lines because they were not compact enough as a unit.

This was exacerbated by Bayern’s fluid movement between the lines, which created vertical passing options from the second phase of play into the final third, where Bayern could create quality scoring opportunities. 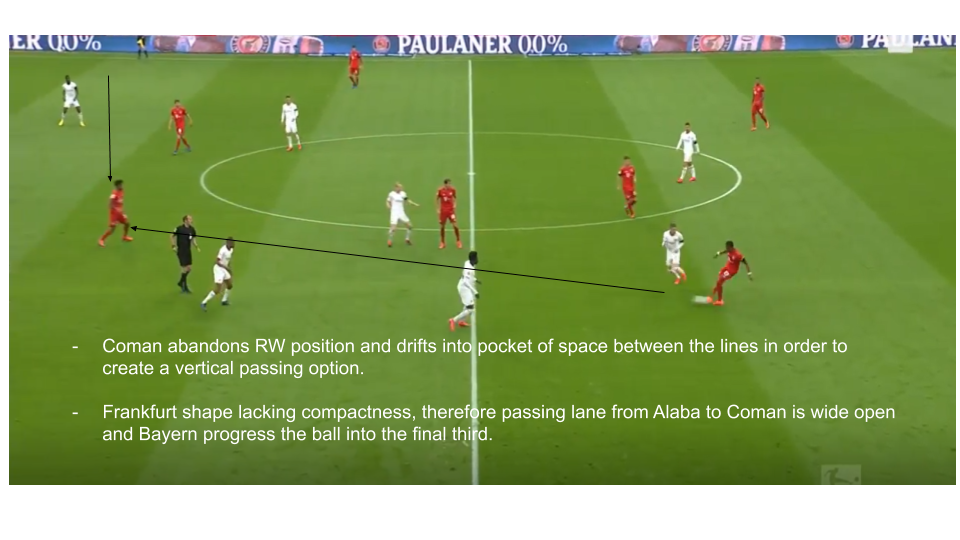 Overall, Bayern were able to penetrate the defensive structure of Frankfurt on numerous occasions throughout the match, finding attacking targets such as Thomas Müller, Robert Lewandowski, and Coman in positions where they could wreak havoc on Eintracht’s exposed backline.

Firstly, what is a Raumdeuter? Well, the term ‘Raumdeuter’ came about in a 2011 interview with Müller. Asked what it is that makes him special, he answered: “Ich bin ein Raumdeuter” which translates to ‘I am a Raumdeuter.” As a result, it has become a popular nickname for the German, though in reality it was a perfect explanation of what type of player he actually is.

A Raumdeuter can simply be translated as a ‘space interpreter’. This is an ideal description of Müller, as he is excellent at identifying spaces and moving into spaces within the opposition’s defensive structure. A true Raumdeuter is difficult to come by in football; some argue that Müller is the only one, and this argument demonstrates how unique the Bavarian’s role is.

He isn’t an aesthetically pleasing player, he isn’t an effective dribbler, and he isn’t the main creative hub of Bayern. Instead, he’s a player who can read the game effectively, occupy the right areas on the pitch, understand the movement of his teammates, and consistently evade defenders with his own movement. 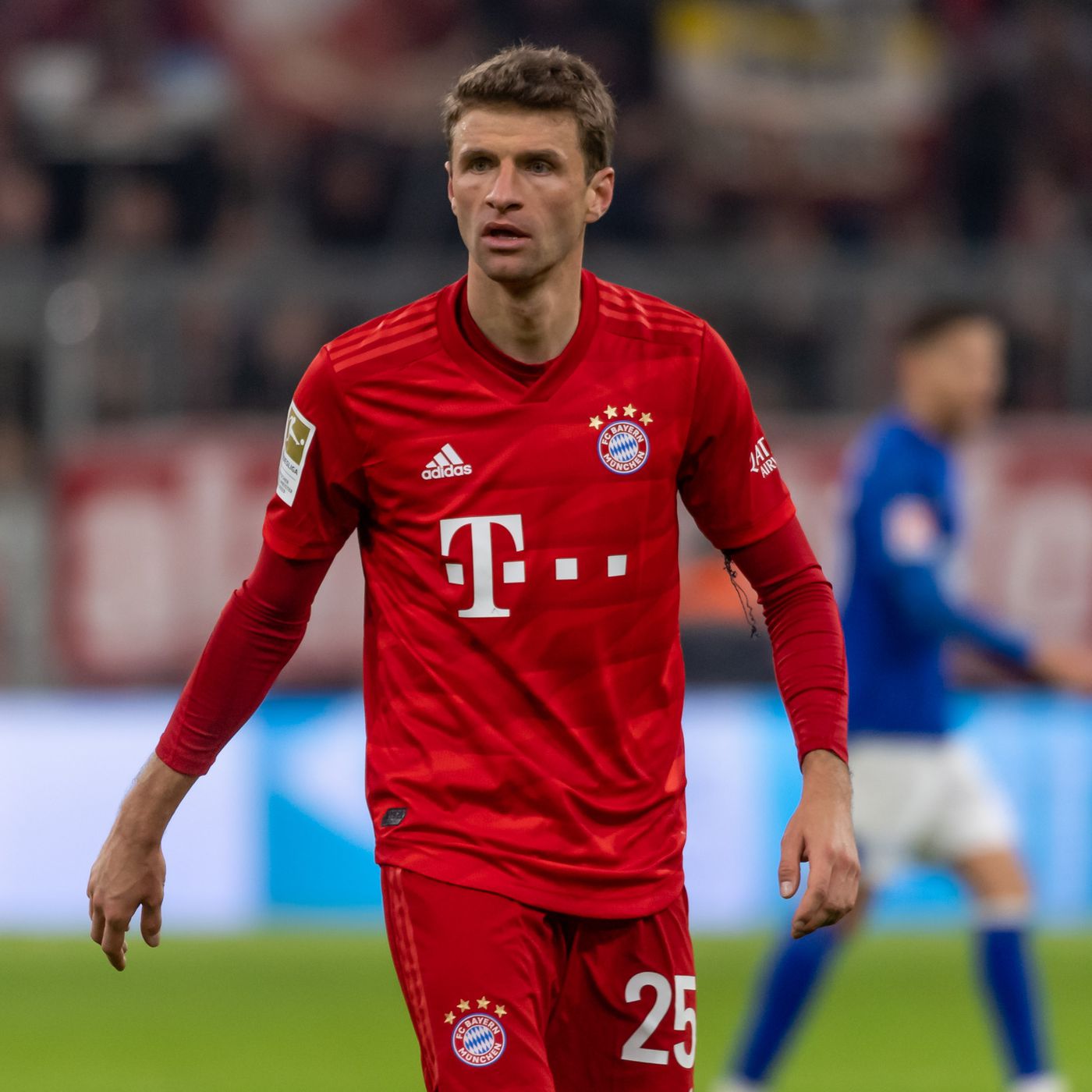 All of these skills are exceedingly difficult to possess and execute, however, Müller can perform all of them to a high level, and against Frankfurt, he put in a performance that was worth his label of a world-class Raumdeuter.

Firstly, Müller often drifted from the typical central #10 position into wide areas to create triangles and numerical overloads. On paper, Bayern lined up in a 4-2-3-1 formation, which saw Müller operate between two wide players, Perišić and Coman. However, Bayern manager Hansi Flick gave him the license to roam between the lines and enter the half-spaces to combine with the full-backs and wingers on both sides.

This allowed for fluid rotation in wide areas, and meant Bayern could rely on wide progression into the final third because Müller often created a numerical advantage for Bayern, as Frankfurt deployed just two wide players on either side (one fullback, one winger).

For Bayern’s first goal, Müller showed why he is viewed as one of the most efficient players in world football by displaying exceedingly intelligent movement behind the Frankfurt defence in the wide area. He creates an overload with his sharp movement, and following a clever dummy by Perišić, Müller is able to receive, drive inside, and find the onrushing Leon Goretzka, who opened the scoring for Bayern. 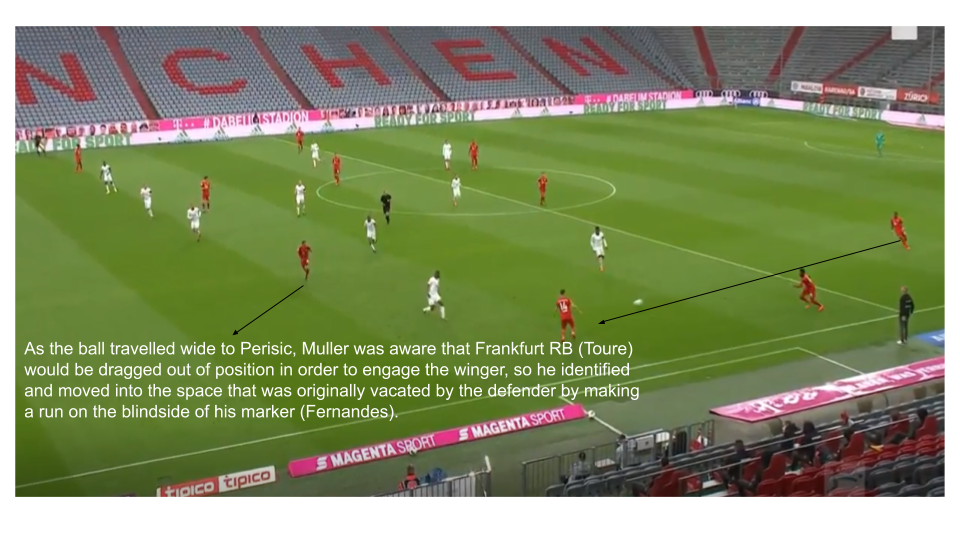 A fundamental part of Hansi Flick’s philosophy at Bayern is counter-pressing. Effective counter pressing allows the team to apply pressure onto the opponent immediately after losing possession, and it necessitates the team’s forwards to remain close to one another and close down the opponent at intense speeds. This requires a high level of anticipation as well as good concentration levels immediately after losing possession, a phase of play where it is sometimes natural to switch off.

This is precisely why Müller is so effective in Flick’s Bayern Munich side, as he works tirelessly off the ball and can apply immediate pressure onto an opponent and anticipate where the ball will move when Bayern lose possession.

On Saturday, he applied 23 pressures when out of possession (more than any Bayern Munich player), 9 of which came in the attacking third. A ‘pressure’ refers to when a player applies pressure to an opposing player who is receiving, carrying or releasing the ball. Many of Müller’s pressures resulted in Bayern winning back possession in advanced areas, which allowed them to pick apart Eintracht’s unsettled defensive shape.

A significant part of Flick’s defensive strategy, perhaps the most important, is intense counter pressing. In order to maintain compactness out of possession, Bayern deploy a high defensive line, which helps minimise space in between the lines and increases the chances of winning possession in the opponent’s half.

It’s a high-risk, high-reward scenario, but the element of risk can be mitigated if the defenders have the pace to recover and sweep up counterattacks. In this case, Bayern are able to play the high line because of their quick defenders, who can easily cover the space in behind them.

Against Frankfurt, Bayern deployed a high line which completely nullified any potential attacking threat that their opponent’s may have carried. 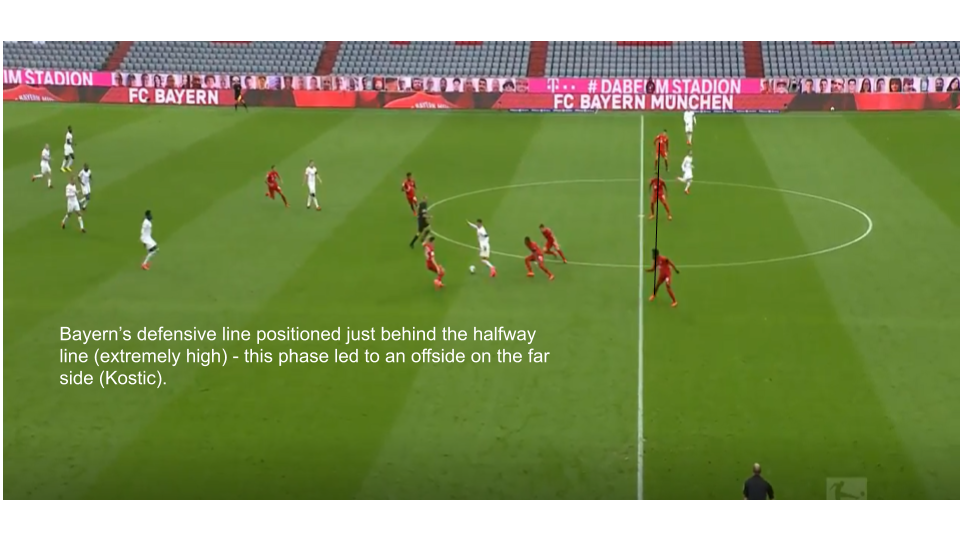 Bayern’s high line invited Frankfurt to play long, as their only way of hurting Bayern in open play was to try to exploit the space behind the defence. This was supplemented by the fact that, for the second consecutive fixture, Frankfurt suffered major problems in deep possession.

When they had possession in deep areas, there was a scarcity of short, progressive passing options, which meant that they were forced to play it long in order to relieve pressure.

There were many occasions where, if Eintracht goalkeeper Kevin Trapp did decide to play short to one of his first phase players, they would have been under immediate pressure, which would have either forced a back pass or, at worst, a turnover of possession. 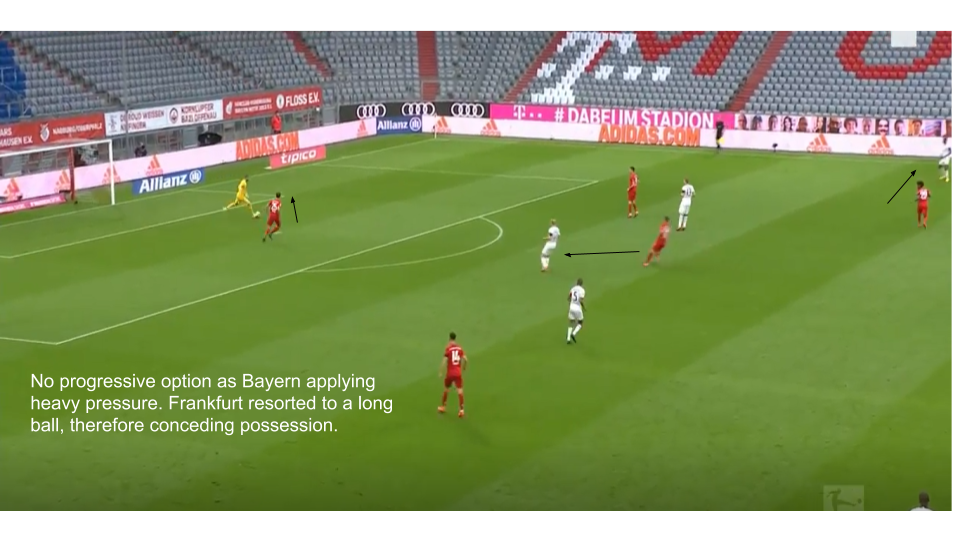 This sequence occurred many times, as Frankfurt often conceded possession by overhitting long balls which rolled into the path of Bayern goalkeeper Manuel Neuer at the other end. This only enhanced Bayern’s performance, as they were able to perform wave after wave of attacks, thus gaining momentum in the match.

Out of the 395 passes that Frankfurt attempted, 32% were long balls (25 yards or over). Of these long balls, Frankfurt completed just 54% of them, as opposed to Bayern, who completed 82%.

Despite being completely clueless in open play, Frankfurt did offer a huge threat from set-pieces thanks to several tall, aerially imposing players, as well as Filip Kostic’ superb delivery.

At the break, Bayern led 2-0, and within a minute of the restart, Lewandowski stretched that lead to 3-0. However, Frankfurt battled their way back into the game via two set piece goals; two headers from centre-back Martin Hinteregger, who is now the top scorer at the club this season with 8 league goals.

For the second goal, the movement at the near post was used to unsettle the zonal marking structure that Bayern had implemented, as it dragged players out of position and created space for Hinteregger to move into and score. 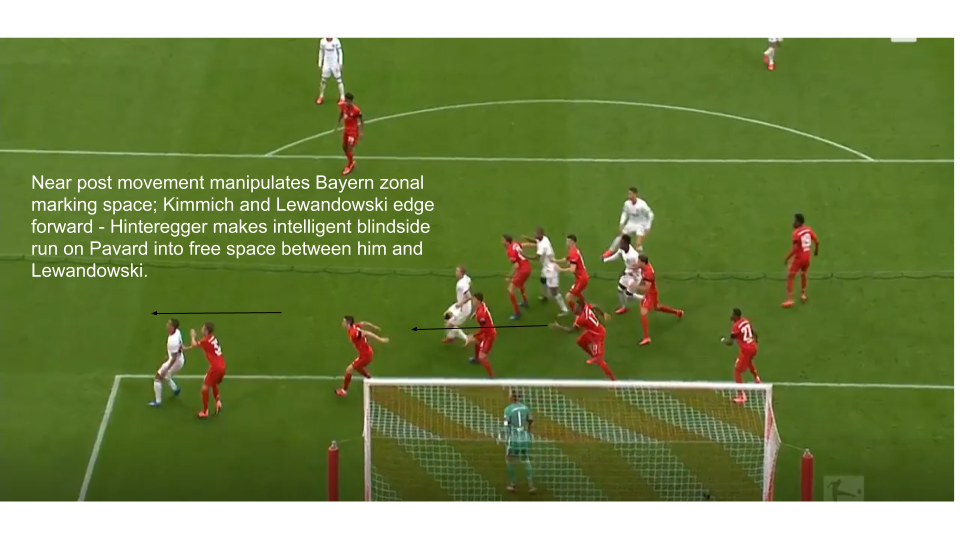 From then on, Bayern controlled the game at a relatively low tempo, whilst continuing to nullify any open play threat that Frankfurt carried, as they intelligently prepared for their crucial match vs Borussia Dortmund in mid week.

Frankfurt pressed high from the beginning and offered Bayern ample space in dangerous areas which they exploited, mainly through the world class performance of Thomas Müller.

Frankfurt were devoid of ideas in possession; a lack of progressive options in the first phase of build-up led to long balls being pumped over the top of Bayern’s high defensive line, which resulted in Bayern resuming possession and commencing attacks.

Although they did threaten heavily through set-pieces, Frankfurt were truly outclassed by a Bayern side that continued their sensational form under manager Hansi Flick, as they reopened the four-point gap at the top of the table ahead of the highly anticipated ‘Der Klassiker’ on Tuesday night.