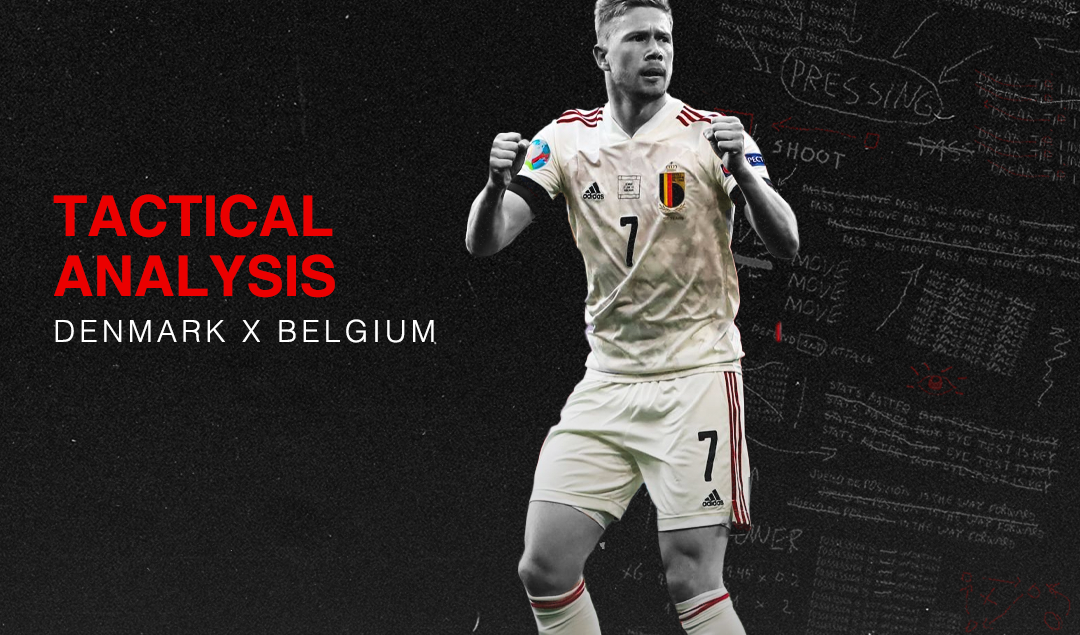 As the Parken Stadium roared on its Danish heroes at the sound of the national anthem, the events in Copenhagen were marked by the overwhelming train of events that occurred over their talisman Christian Eriksen. A huge choreograph of the Danish shirt commemorating the Nerazzurri midfielder was on show and the adrenaline and sense of urgency the Danes had in performing for their star man could be seen from the beginning of the game.

The Parken stadium saw their men capitalise on an early error from Belgian Defender Jason Denayer whose lacklustre pass was capitalised and coolly finished by Yusuf Poulsen in just the 2nd minute. As Denmark kept applying the pressure, football’s show of solidarity and the beauty of the game showcased itself in the unilateral show of support players and fans had where in the 10’ minute, play was halted to applaud medics and life in honour of Christian Eriksen.

As the half went on, Danish ascendancy continued, with particular emphasis on the left hand side namely Joakim Maehle and Mikkel Damsgaard who caused the Belgians’ great problems. The supposed favourites for the tournament Belgium were placed in a tough position from the first half, starman Romelu Lukaku’s lack of action intertwined with a Danish side with energy and most importantly in front a home crowd shunned the Belgians into a quiet half.

As the second half started the Belgians became more alike themselves, the return of Kevin De Bruyne inspired the Belgians, and the Manchester City midfielder played a key role in returning the Belgians to a pole position in the match and group.

Along with De Bruyne, both Axel Witsel and Eden Hazard took to the pitch, representing the depth and quality of the Belgian side. Belgian quality was to show in the 54’ where intricate play from De Bruyne, and power and finesse of Romelu Lukaku showcased itself for the assist and great finish by Thorgan Hazard who levelled the match 1-1, silencing the crowd for a tense final third of the match.

Belgium’s sheer personnel and moments of magic got them through the match which was again seen in the link up play between Real Madrid star Eden Hazard and Romelu Lukaku, which saw play stretched and a pass to De Bruyne saw the ball rocket into the net for 2-1 in the 70’ minute. Though coming close in the final few minutes, namely with an attempt hitting the bar in the 88’ minute from Barcelona striker Martin Braithwaite, the Danish efforts were in vain. With 0 points, the Danes hope for a miracle to take them through to the next stage of the tournament.

After a bland first half for one of the tournament’s favourites, Belgium’s change and personnel showed to be the catalyst for change in the second half. The introduction of Kevin De Bruyne in the 46’ minute inspired the Belgians to victory and his sole intricacy and magnificence single handedly changed the match. His world class talent showcased itself in his role in the first goal with two jinx within the penalty area followed by divine vision to find Thorgan Hazard for the goal that levelled the match. 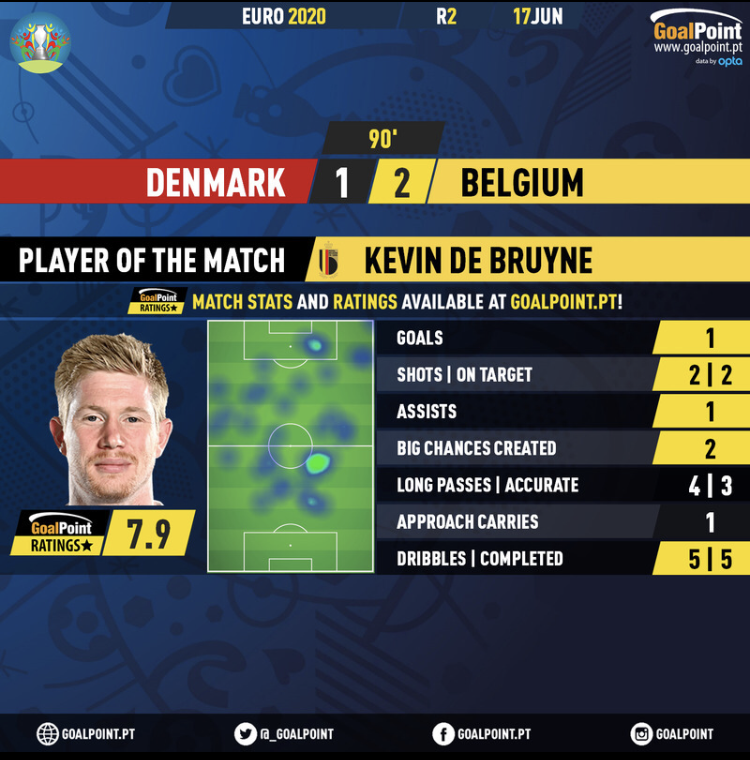 In his first appearance since his nasty head collision with Antonio Rüdiger in the Champions League Final in Porto, Kevin De Bruyne proved once again why he is one of the finest players in football.

De Bruyne’s role in the middle of the pitch changed the match creating 2 big chances with one being the incisive pass that set up Thorgan Hazard for the goal. Moreover, De Bruyne’s ability to carry the ball showed itself in his 5 long range dribbles which were all successfully executed.

Alongside this, his power and precision also showed how the midfielder scored outside the box following a first time pass from Eden Hazard which rocketed into the bottom corner past Kasper Schemeichel who was left in awe of the Manchester City wonder.

The Danish hopes of going through to the round of 16 remain slim, relying on events in the Belgium x Finland match to go their way, however for the Belgians; they are already through. Belgium will still remain favourites for some, however though it was a prolific performance from their talisman Kevin De Bruyne they will need to tighten up at the back, particularly in the business end of the competition.

The Tipping Point: Eden Hazard and Kevin De Bruyne’s Impact off the Bench

Belgium went into the second half trailing 1-0 to Denmark courtesy of a brilliant combination by Yussuf Poulsen and Pierre-Emile Højbjerg. Kevin de Bruyne was brought into the pitch on the 46th minute by replacing Dries Mertens. The impact of this substitution was instantly seen as Belgium’s gameplay got the flair it was lacking in the first half.

The Manchester City midfielder created instant impact by assisting Belgium’s equaliser from a Thorgan Hazard goal. It was a brilliant counter attack led by Lukaku. He cut the ball back at the edge of the box and de Bruyne played in a calm pass for T.Hazard to score. De Bruyne had 36 touches in the game and made 27 passes with an accuracy of 74.1%. 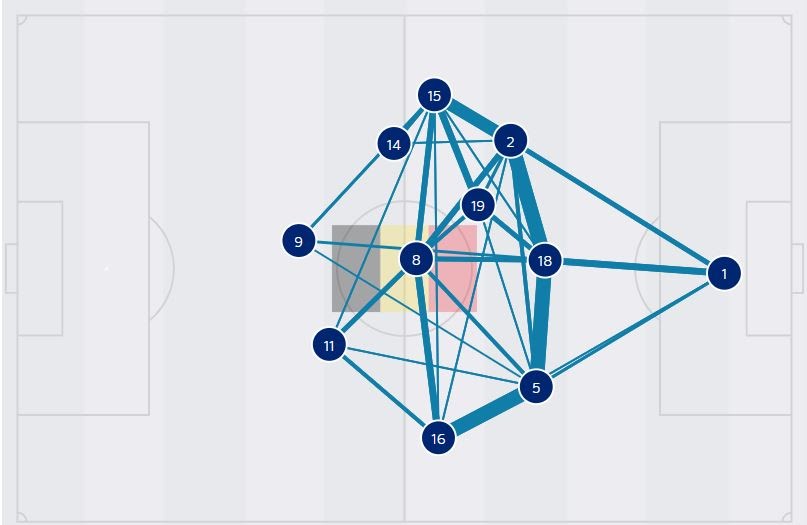 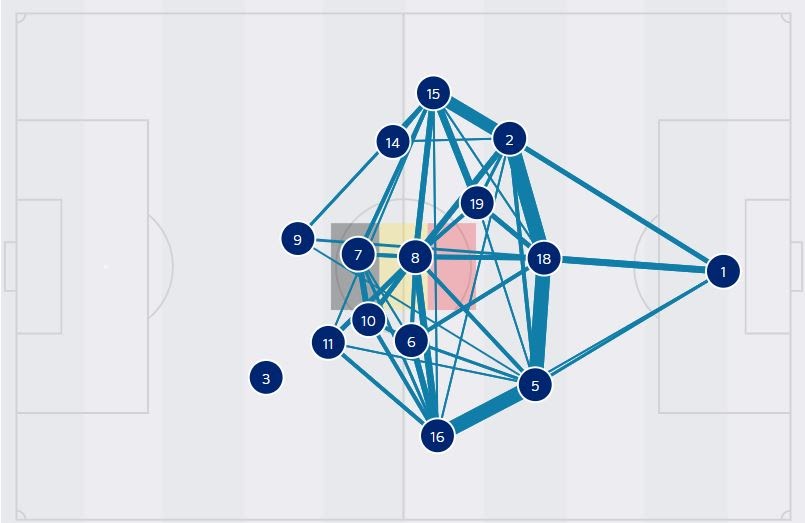 Eden Hazard was brought in the pitch in the 59th minute to replace Yannick Carrasco. His substitution gave the Belgians the extra centrality that they needed. It also gave them extra technicality up top and an actual goal threat. Hazard’s passes at times were very dangerous, making 26 touches in the game and 24 passes with an accuracy of 91.7%.

The first image is the pass map of Belgium without Kevin de Bruyne and Eden Hazard. Look at the passing lines between Youri Tielemans (no.8), Romelu Lukaku (no.9) and Yannick Carrasco (no.11). There’s good contact but they’re too far from each other to create any substantial attacking threat. Meaning, the passes or in behinds will be halted by the danish defenders before these three can do anything. We can see in the two graphics above how the problem is overcome and contact is solidified after Kevin De Bruyne and Eden Hazard comes in.

The moment these two come in the picture (in the second image), passes are solidified and now Belgium have numerical and technical superiority at the centre of the park. All the three players have now got covers closer to themselves and can now stitch passes in a better way.

The positioning of Tielemans, De Bruyne, Lukaku and Hazard is very crucial. If you look at Denmark’s pass map, there’s a gap between Simon Kjær (no.4) and Andreas Christensen (no.6). Tielemans, De Bruyne  and Hazard are positioned exactly in that particular gap and Lukaku is on the blind side of Kjær. For the first goal this was the zone from where Thorgan Hazard and De Bruyne had begun their off the ball movement. 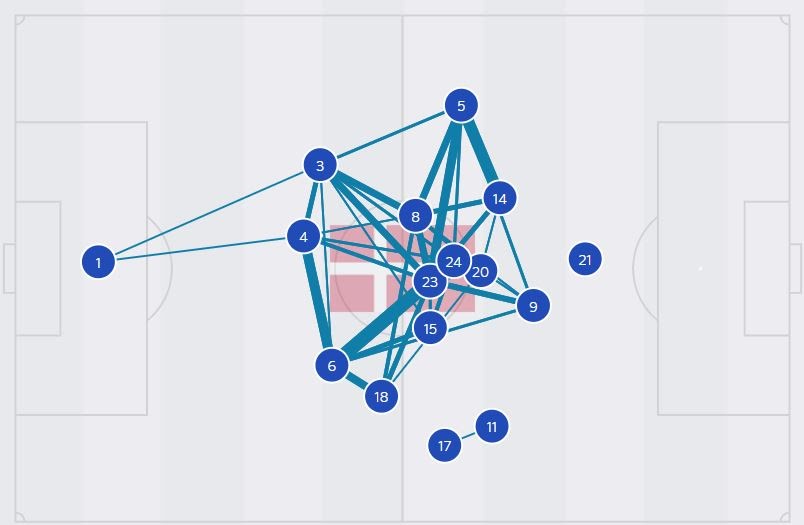 Whilst Denmark exhibited an impressive showing to start the match, the trio of Kevin De Bruyne, Romelu Lukaku and Eden Hazard ultimately proved too much for the Danish defense.

The position of Thomas Meunier (no.15) and Thorgan Hazard (no.16) (in the first and second image) is crucial for Belgium’s back-3 system to sustain. They provide outlets for the Belgian centre-backs to pass the ball creating a funnel of 5 players during the build-up. But since there are no full backs in Belgium’s setup, there are no overlapping/underlapping movements in the flanks.

This at times was the reason for Belgium’s lack of attacking prowess. If Hazard and Meunier had players at their back who could bring out in-behinds from the back towards the blind side of the opponent’s defence, Belgium’s attacking game would see a serious upgrade.