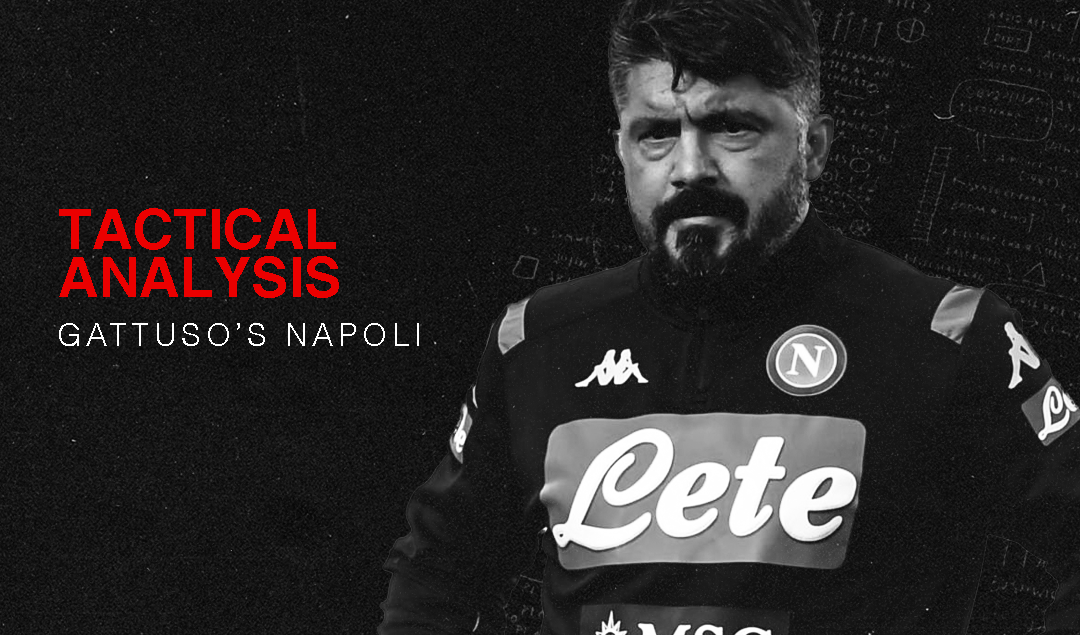 Since taking charge of Napoli on December 11, 2019, Gennaro Gattuso has made the Partenopei click on all cylinders, who currently sit sixth in the league, firmly in the path for Europa League qualification. More importantly, they won their first trophy in six years, defeating Perugia, Lazio, Inter, and Juventus en route to winning the Coppa Italia.

Napoli under Gattuso have placed significant emphasis on consolidating possession in their own third whenever possible and thus often commit many players towards playing out of defence patiently.

Seldom do they deviate from short build-up and are uncompromising in their insistence to exploit the recently introduced rule which allows teams in possession the ability to receive the ball in the box directly from a goal kick.

An interesting manifestation of such insistence was how Napoli attempted to counter Hellas Verona’s man-oriented pressing. Kalidou Koulibaly passes to David Ospina from the goal kick which means possession is kept in as a central a position as possible.

This has the effect of making the vertical option more dangerous compared to if Ospina passed to Koulibaly, who is more susceptible to pressure as no Hellas player is oriented around Ospina. Furthermore, Koulibaly would be limited by his wider positioning which cuts off potential options.

This strategy is still fairly rare; however, it is not original to Napoli with examples of other teams using it including Roberto De Zerbi’s Sassuolo and Quique Setién’s Barcelona. Nevertheless, how Napoli use it differs as it maximises Koulibaly’s abilities in possession.

The potential danger of a vertical ball invites Verona to press Ospina; however, should they take the bait, Koulibaly then becomes open with space to surge into as the man orientation is designed around the goalkeeper not being a crucial actor.

Conversely, they could opt to reorient their system which would leave another man free to receive a pass, in this instance Koulibaly, allowing for Napoli to consolidate possession deep and exploit space left by their man orientation. Verona elected for the latter approach.

Gattuso displayed tactical nous in exposing a system failure in an approach used notably by two of Serie A’s overachieving teams in Hellas Verona and Atalanta. Such an example is an exposure of a system failure as Verona’s man orientation is designed around preventing outfield players from receiving the ball to feet comfortably.

However, when the goalkeeper becomes involved as an outfield player directly from goal kick situations, that aim is no longer achievable as they lack the numerical support to go man to man against all potential central passing options, thus making the approach untenable. In doing so, Napoli negate their strengths whilst exposing its weaknesses.

They cause Verona to simultaneously overcommit insofar as four central players dedicated to preventing short distribution while exposing their under-commitment, as Ospina’s involvement meant they lacked the men required to achieve the numerical parity desired for man orientation.

Another intelligent move by Gattuso was to use a double pivot in the build-up to create space, despite using a 4-3-3 on paper. This creates space on the side of Koulibaly by forcing a Hellas player to commit to Diego Demme, who spins around and subsequently exposes space in behind for Koulibaly to run into.

Thus, Gattuso’s Napoli showed high levels of proficiency in their manipulation of Verona’s positioning, and succeeded in consolidating possession and creating space.

Napoli prefer to keep their full backs deep during build-up, in line with the deepest midfielder. While this increases Napoli’s susceptibility to the touchline press, it also enables them to create space.

They have no qualms about passing backwards to restart movements; to a certain extent it is encouraged as it allows Napoli to draw the opponent deeper and regain control, as most team are reticent to commit the press as far as the goalkeeper.

In turn, this allows them to exercise circuit play such as the aforementioned drag and rotation pattern as well as acting as an outlet. If the opponent does not react to the bait, Napoli can then consolidate possession and gain territory by progressing up the pitch slowly in a risk-averse manner.

Napoli’s use of deep full backs allowed for similar patterns to emerge during open play where circumstances were less controllable. This forces the opponent to commit deep across the pitch, as they seek to engage in a deep touchline press. In turn, they can create space either in behind the defense as the opponent looks to remain compact, or in between the lines.

The full backs are generally quick to recycle possession centrally after receivings they seek to bait the opponent upfield, but they caution against becoming isolated. Thus, Napoli continue to be risk-averse even in their use of risky strategies, prioritising not making mistakes over potential creative gains. The full backs are perhaps the most risk averse element as they are rarely tasked with making a risky pass.

Their aim is to draw the opponent forward and manipulate their positioning. Therefore, their positioning is crucial in allowing the central players with the time and space to execute more rewarding moves as they require the opponent to cover a greater percentage of the pitch and/or act as outlets for possession, forcing reorientation only for a subsequent central pass to create space.

The deep full back has the additional benefit of increasing the likelihood that should Napoli concede a turnover it occurs in a less dangerous area, as wide areas are where they provide the least support which in conjunction with the touchline increases the likelihood of isolation. The full backs force the opponent to either cede territory and allow progression, which nullifies high pressing efforts and leaves them more exposed to the consequent central pass.

Thus, press baiting is a crucial part to how Gattuso’s Napoli seeks to create space. They perform it in a risk-averse manner as they patiently wait for the opponent to either overextend or surrender to their form of build-up.

This in many ways is more risk averse than playing in a direct manner when viewed over the macrocosm of a game, as Napoli are less likely to receive pressure when in possession for large sections of the game. Furthermore, due to their deep commitment and general mentality, they are unlikely to make significant errors.

High-pressing teams such as Verona cause Napoli to be more patient, as they expose themselves to fewer risks while also creating space and utilizing their circuits. On the other hand, teams who sit back and don’t press as high up the pitch allow Napoli to consolidate territory higher up the pitch and hold stagnant possession.

Such deep commitment can lead to problems elsewhere, as they struggle to take advantage of vacant space or break through an opponent’s mid-to-low block, while they additionally will concede possession in dangerous areas against higher pressing teams, as seen in the first goal against Atalanta on July 2.

Nevertheless, it should be noted that when compared to other teams who seek to play out of the back, this happens very rarely. Gattuso’s Napoli play out of defence not for the sake of playing ‘beautiful football,’ but because it is an effective space creation tool.

Another important aspect of how Napoli play, particularly against bigger sides, is their solid 4-5-1 structure out of possession. Their ambition is to protect space and make themselves difficult to infiltrate, thus leading to Napoli rarely pressuring the opponent’s centre backs for example.

Napoli protect the central spaces by remaining compact and reducing the amount of ground their players have to cover horizontally. Like most teams who play a compact mid-block, Napoli shuttle from side to side, making their pressing efforts ball-oriented as they target the side of midfield that the ball is shifted to.

For Napoli to remain compact centrally, they must vacate the opposite flank. This increases their susceptibility to a quick switch of play, but it also bolsters their pressing efforts and protects space in central areas.

This strategy is effective at preventing the opponent at infiltrating the central spaces and half-spaces, but it also doesn’t mean that Napoli will cede territory in their own half to the opponent, which would cause them to sustain pressure deep.

Rather through protecting central zones, they seek to force the opponent to play in the wide areas, where they can more effectively press them. This prevents effective transitions from Napoli’s perspective, as they can force a backwards pass to the centre back.

From there, Napoli can re-group centrally and begin the process again until the opponent gets frustrated and tries an alternative strategy. This results in more dangerous sustained pressure scenarios as it becomes easier to move the ball into areas in order to create chances.

Thus, the defence is not impenetrable and will eventually break against a patient opponent with quality, but it serves its aim of significantly reducing the pace of the game and allowing Napoli to protect central spaces without sustaining heavy amounts of deep pressure.

A crucial element of this strategy is pushing the defensive line forward as soon as pressure is relieved in order to regain territory and reinitiate the battle of attrition, as Napoli want to do as much defending as possible in the middle 3rd. They seek to remain deep and compact so as to not leave space dangerously exposed in behind and prevent potential goalscoring opportunities.

Their goal against Barcelona characterises this approach. Four passes were exchanged between Giovanni Di Lorenzo and Kostas Manolas at the beginning of the period of possession, which would end up resulting in their opening goal.

Napoli then progressed centrally after clever movement from Fabián Ruiz, with Lorenzo Insigne receiving possession near the centre circle and passing it backwards to Nikola Maksimović, who proceeded to play the ball to Mario Rui, who passed back to Ospina.

Di Lorenzo broke this pressure and surged forward, finding José Callejón, who played the ball back to Manolas. Ruiz then found Piotr Zieliński in between the lines, who capitalised upon an error by Junior Firpo to play a pass into Dries Mertens, who made no mistake with the finish.

Overall, the build-up to this goal featured a minute of possession and 16 passes, 15 of which were uninterrupted, demonstrating Napoli’s modus operandi.

One could argue that Napoli rely on their opponent’s naivety to produce successful attacks, and this is somewhat true. However, Napoli have players such as Insigne, Mertens, Arkadiusz Milik and Callejón who thrive in the final 3rd and allow Napoli to control territory in dangerous areas.

In particular, Insigne and Mertens have the ability to create something out of nothing and arrive in the final third. Gattuso has transformed a potential weakness into a strength when it comes to counterattacking, creating space for proficient ball progressors like Zieliński to exploit, making the attack far more difficult to defend against.

Teams that mimic Napoli’s mid block and seek to restrict space in the middle are the most effective opponents when it comes to nullifying their attacking threat, as they can prevent sustained pressure and force Napoli to play direct to Milik.

They have already secured European qualification for next season, but Napoli’s biggest test awaits next month in Lisbon, when they will take on Barcelona for a chance to advance to the Champions League quarterfinals for the first time in club history. It’s a tough task, but with Gattuso at the helm, they’ve got the right man in charge to take them the distance.