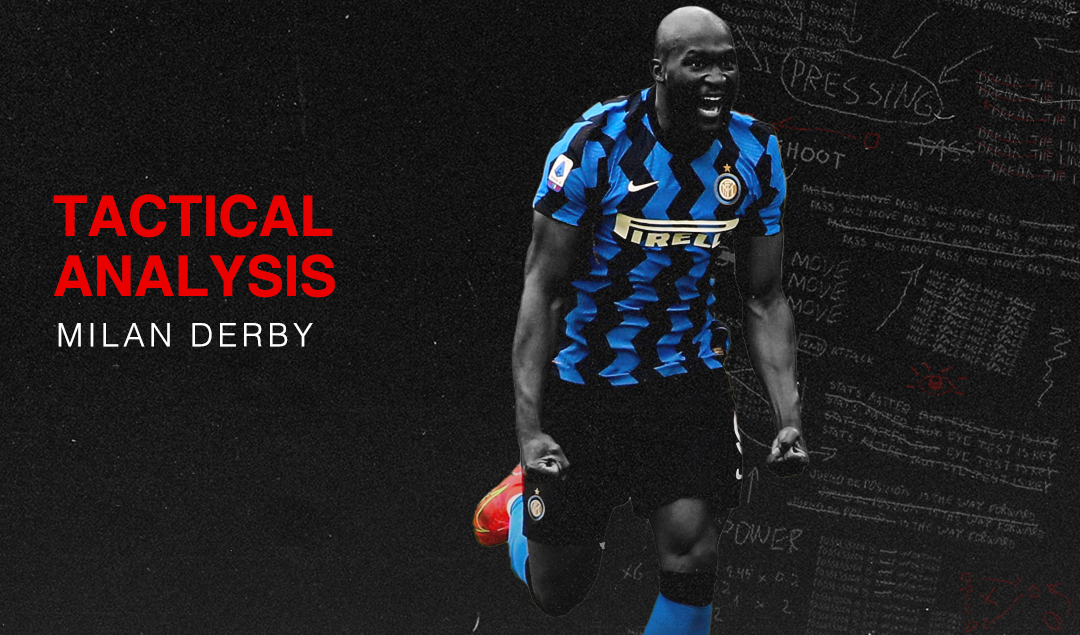 The enthralling Derby della Madonnina on Sunday was one of the most important and highly anticipated in years. With Juventus looking more vulnerable than ever, the two Milan clubs are in the title picture realistically, with just a point separating Inter and Milan at the top at the time of kick-off.

Backed heavily by Chinese owners Suning, Inter’s progress was salient last year, with Antonio Conte’s men finishing just a point behind Juventus. Conte has rapidly put his stamp on this Inter side, who haven’t looked this good in a decade since José Mourinho’s treble winners. Inter look and play exactly how a classic Conte-managed team does, a steely identity full of hungry players devastating on the counter, with a range of stars shining in Romelu Lukaku, Nicolò Barella and key summer signing Achraf Hakimi to name a few.

Conte arrived in typically fired up fashion with former Juventus CEO Guiseppe Marotta accompanying him, he set his sights on operatically demolishing the dominance that he aided in beginning at the Old Lady. Investment in the squad and making the Italian manager the second-highest-paid manager in the world was a statement of intent from Suning. Having not finished in the top three for 10 years bar last season, Inter remain the favorites for a Scudetto.

Similarly, Milan have meandered in mediocrity for years, never reaching the cataclysmic heights they so regularly did previously. Buoyed by the return of veteran superstar Zlatan Ibrahimović last January, they began a brilliant run of form towards the end of last year and have continued to build on that this season, going unbeaten for 27 Serie A games until the Juventus loss in January.

Guided by Stefano Pioli, whose appointment was originally met with uproar from the Rossoneri fan base, Milan finally found their feet as young emerging talent began to become established in the likes of Theo Hernandez and Hakan Çalhanoğlu. Despite slip-ups against Atalanta and Crotone, they have had a terrific season inspired by the Benjamin-Button esque Ibrahimović, Milan have admirably dug in whilst decimated with frequent injuries showing a grit that surprised many.

It has been ten years since both clubs from Milan competed for the title against each other. It is refreshing to see the sleeping giants awoken and on the right path, meaning the stakes coming into the game were huge. The calibre of matches in terms of entertainment value between the big teams in Serie A have been unrivaled, speaking volumes of a league very much reborn and exploding. The derby was no different as Inter ran out 3-0 winners in an absorbing encounter.

It is often said a case could be made for Conte being the best manager in the world when having ample time to prepare, showcased by the inspired Euro 2016 run he oversaw for Italy. In this case, Inter had a full week and looked extremely formulated. It is worth taking a deeper dive into how Inter produced and executed a Conte master class.

The devastating Romelu Lukaku-Lautaro Martínez pairing has produced 30 goals between them; it is one of the best and most lethal strike partnerships in the world. The duo were at their imperious best on Sunday. Frequently, Inter hurt Milan by Martínez and Lukaku constantly picking the ball up from winger positions. The Argentine was readily available on the left combining with Ivan Perišić, and Lukaku on the right with Hakimi bombing forward, with Barella also in tow, constantly finding half-spaces on the right to cause overloads.

On the right in particular the presence of Barella caused Milan a major headache. Defenders Milan Škriniar and Alessandro Bastoni playing as LCB and RCB were always looking to play Barella who hovered on the right channel in space, meaning Hakimi could make inside runs or outside runs in the channel interchanging space and provide a dangerous threat.

As you can see from the images above for the first goal, a direct ball from Hakimi down the right let Lukaku loose as he was able to exploit Hernandez trying to venture forward and close Hakimi down. Alessio Romagnoli had a torrid time dealing with Lukaku throughout the game, as he was pictured saying ‘È velocissimo’ which translates to ‘He’s very fast’ to his defensive partner Simon Kjaer. Lukaku burst down the pitch crossing to Martínez for the opener.

Martínez and Lukaku were incessantly hogging the touchlines out wide and Milan couldn’t cope, with Franck Kessié and Sandro Tonali caught out by a direct ball or being drawn towards the ball, opening spaces in the middle for the opposing wing-back to drive into or Chrisitan Eriksen and Barella to exploit.

This is also how Inter produced their second, with Milan 1-0 down in the second half and pushing on in their best spell of the game in search of an equaliser, they were caught up the pitch via another forward pass from Hakimi to Lukaku.

Hakimi then stunningly continued his run with Barella just behind, eventually playing it to Eriksen inside resulting in a brilliant, typically Conte-style counter-attacking football at its finest. Inter also exploited the fact that Hernandez was bombing forward, so on both occasions, they bore down on goal with just three defenders facing them whilst Kessié and Tonali were caught off guard in the midfield pivot. 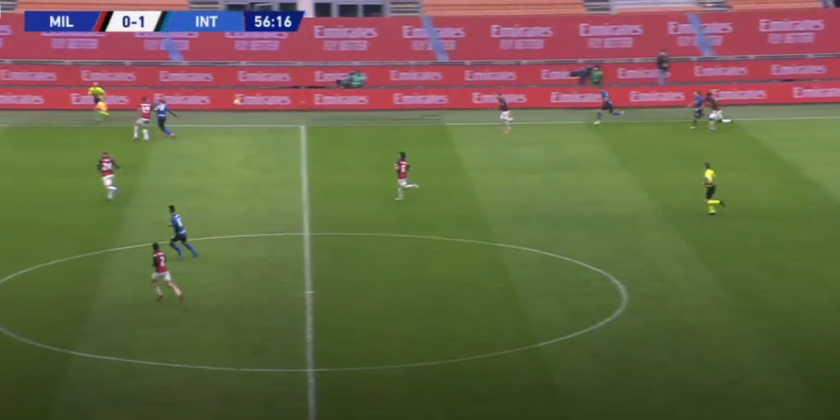 Much like in some of Inter’s best performances this year like the win at Sassuolo, in a rip-roaring opening Inter flew out the blocks. Not necessarily pressing Milan with intensity but being sharp in the tackle and not allowing them to get their passing game going with Conte gesticulating on the touchline to constantly close down space.

Milan couldn’t get going in the opening 30 minutes, and whenever they tried to commit bodies forward, Inter dropped deep like they regularly do to ensure everyone is back. As loose balls were recovered, passing to the readily available forwards constantly moving on the right and left-wing of the pitch was too overwhelming with Perišić and Hakimi marauding down the flanks.

There have been games this year where Inter have looked bereft of attacking ideas when playing down the wings hasn’t worked, but the movement from Lukaku and Martínez was too smart with Perišić and Hakimi grabbing the onus to sprint ahead.

I mentioned ‘direct balls’ quite a lot in the first section, and for good reason, Inter wasted no time on the ball. Below are two great examples of how well they switched the play for large parts of the match, in this particular example it is twice in the same sequence. 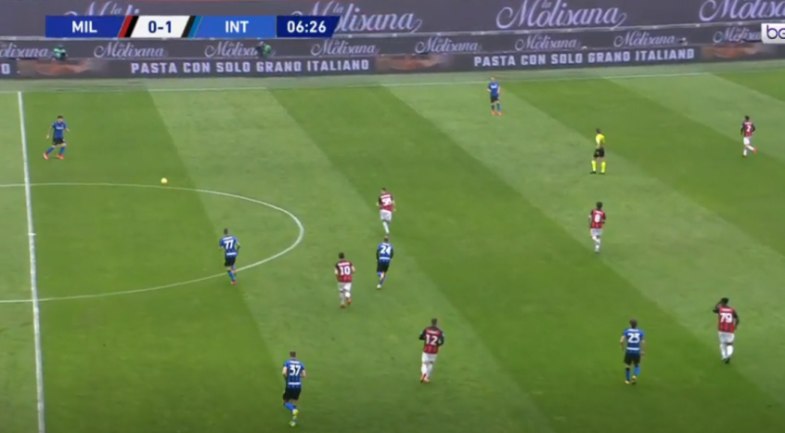 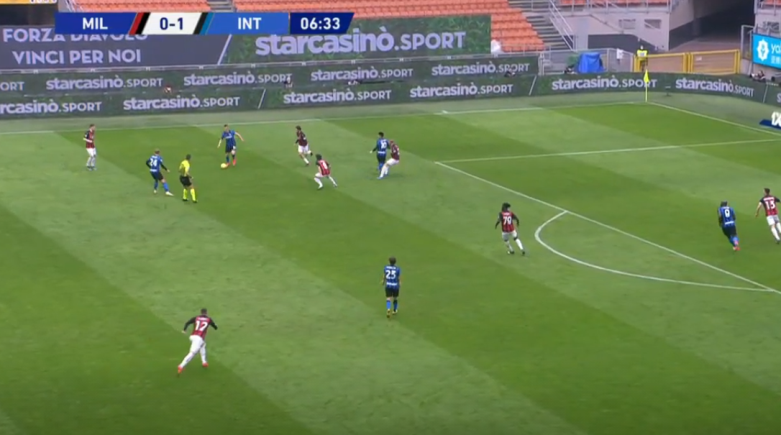 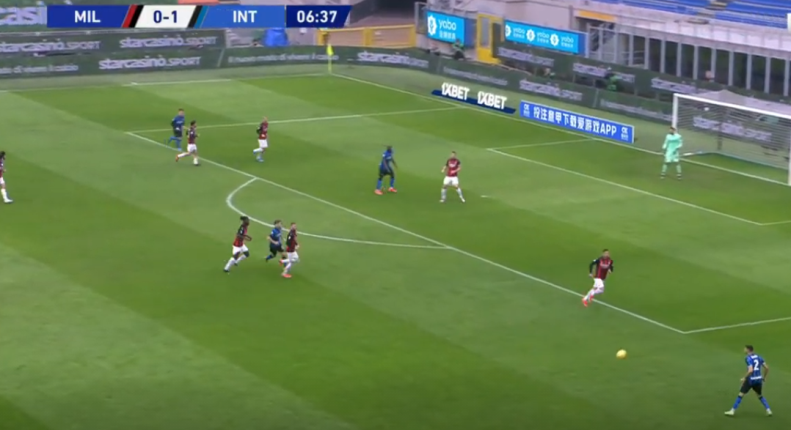 A Conte-managed team is at its most prudent when making quick, precise use of the ball, and Inter had a plan and executed it well. Routinely shifting the ball from one side to another to remove the congestion of players and keep the ball moving. There was no dilly-dallying or need for close, intricate moves, it was always ‘head up and pass’ look to seek out the wing-backs and look for space down the line.

In Conte’s famed 3-5-2 system wing-backs tend to be the stars e.g. Victor Moses and Marcos Alonso, Kwadwo Asamoah and Stephan Lichsteiner when the system purrs as well as this, you can see why Conte uses it as a default, sudden switches of play catch the opposition out.

This Milan side has punched above their weight this season. No one even tipped Milan to make a Scudetto charge despite Ibrahimović’s egotistical claim he made toward the end of last season when saying “If I was here from the beginning we would be challenging for the title,” but he was actually correct. Through massive adversity and a catalogue of injuries, Milan have shown fight in getting to the position they are in.

As the second half drew to a close, Milan started creeping back into the game as Inter’s pace to close them down decreased, Milan caused trouble with crossing opportunities that Inter were over-enthusiastic to clear, resulting in Hernandez going close. After the break, Milan came out all guns blazing. In a frantic two minutes after the restart, Romagnoli and Kjaer were clearly instructed to push up on Luakaku and Martínez to ensure quick ball recoveries whenever the ball was loose. Milan looked as dangerous they had the entire game.

It was crossing in the first half where Milan looked most likely to score, and balls in the box once again where they threatened Inter in the second. Samir Handanović produced not one but three brilliant saves to make sure Inter were ahead. Twice from two powerful Ibrahimović headers as Milan built up a head of steam, then from a vicious Tonali strike from the edge of the box. Inter were able to weather the Milan storm and capitalise by grabbing a goal on the counter. Handanović has come in for a lot of criticism this year but crucially came clutch when Inter needed him the most.

There is still a lot of football to be played in Serie A, but with Inter winning a staggering 13 in 16 and out of the Champions League and Coppa Italia, their sole focus is the Scudetto. The pressure on them to win has been immense, but they are responding brilliantly, as the off the field issues such as the explosive Lukaku-Ibrahimović spat in the Coppa Italia fixture, or Conte swearing at former Juventus director Andrea Agnelli during the Coppa Italia semifinal don’t seem to faze them.

Romelu Lukaku’s body language throughout the derby painted a picture, encouraging and constantly bellowing instructions to his teammates, he and Inter know the Scudetto is well and truly on. There have been many rumblings behind the scenes as the Suning ownership look likely to sell the club. If that is the case, we may see the Nerazzurri less potent in the transfer market and on the pitch, but if this is to be the season where Inter go for their first Scudetto in ten years, they may look back on the Derby della Madonnina where they took control of the title race.