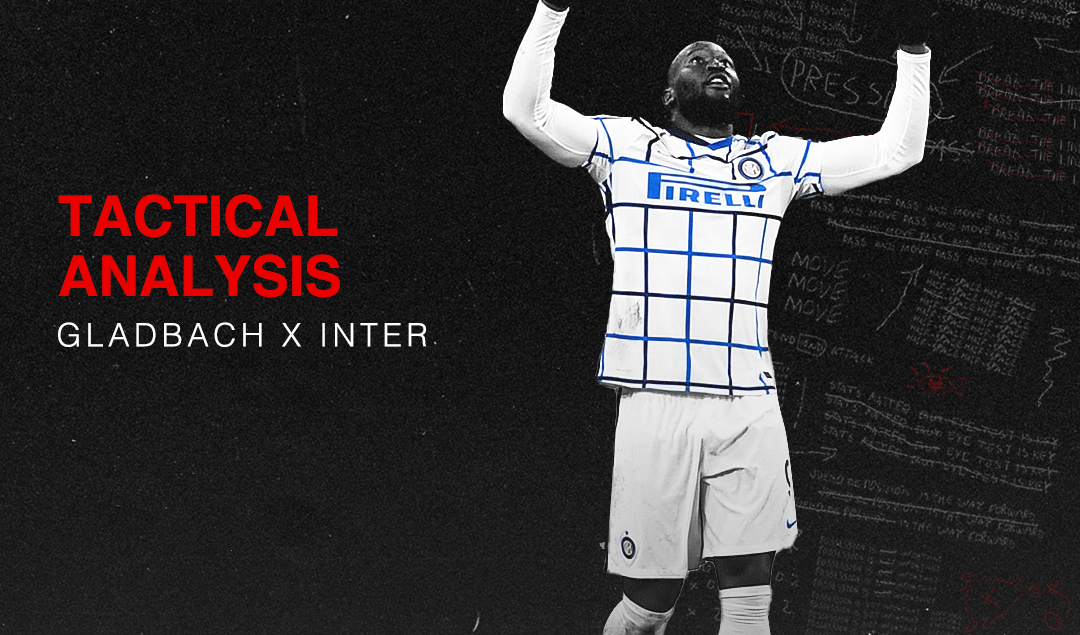 Whilst they remain bottom of Group B heading into the final matchday, Inter kept their chances of progressing to the knockout stages of the Champions League alive after narrowly beating Marco Rose’s Borussia Mönchengladbach away from home on Tuesday evening.

Inter’s record signing Romelu Lukaku was in fine form at Borussia-Park, scoring a brace and causing havoc all night to lead the Nerazzurri to victory. On the other side of the field, Alassane Pléa scored a brace and seemingly completed his hat-trick to make it 3-3 in the 83rd minute, before VAR judged Breel Embolo to have been interfering play from an offside position. 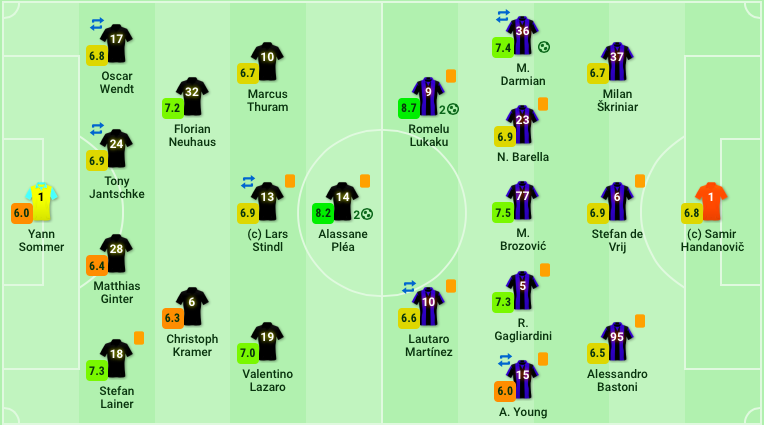 Antonio Conte made several changes to the side that defeated Sassuolo at the Stadio Città del Tricolore on Saturday, with Ashley Young starting at left wing-back over Ivan Perišić and Marcelo Brozović being preferred to Arturo Vidal at the base of midfield in Conte’s 3-5-2. Lukaku came into the side for Alexis Sánchez, starting alongside Lautaro Martínez in attack.

Rose brought veteran Lars Stindl into the side for Embolo, whilst also giving Christoph Kramer the start in midfield over Denis Zakaria. Whilst Valentino Lazaro played at right back during the 4-1 victory against Schalke on Saturday, he played on the right side of attack against Inter, with Stefan Lainer coming in for Patrick Herrmann. 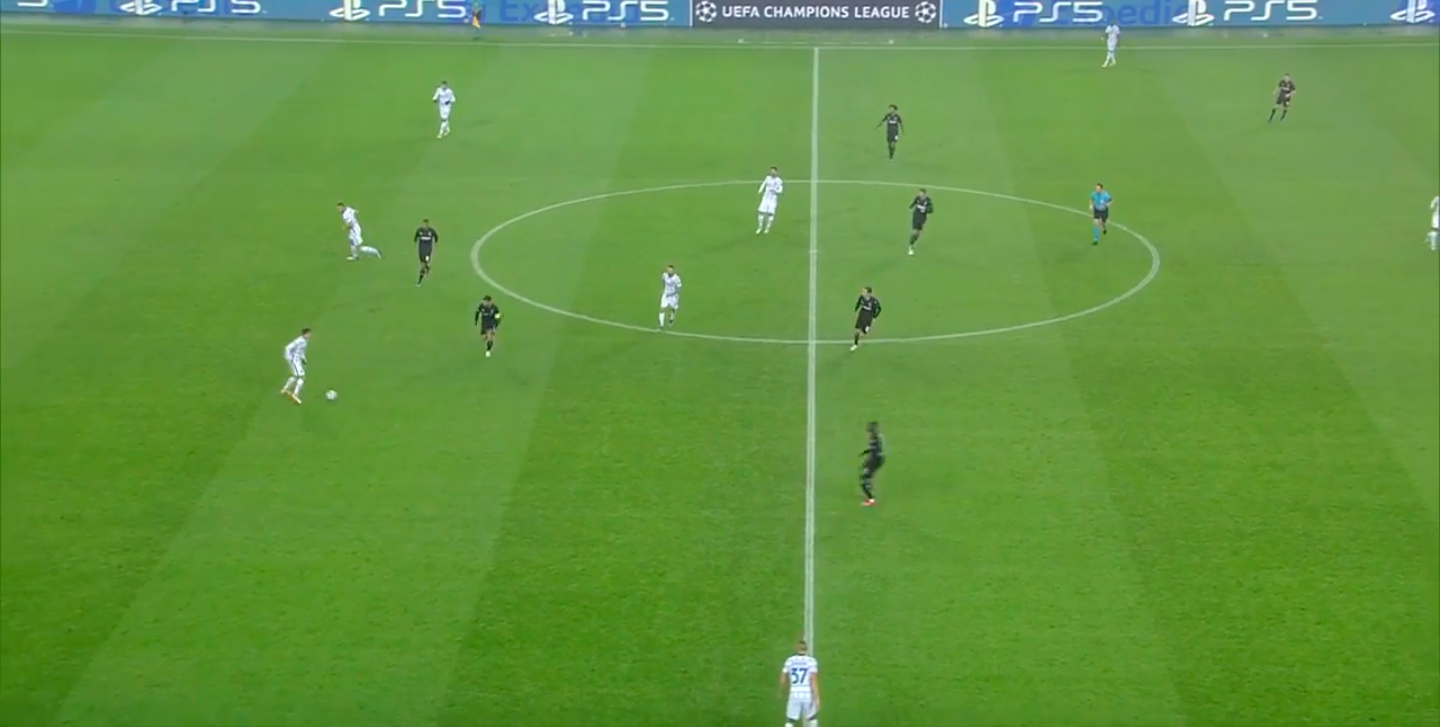 Whilst Rose’s side operated in a 4-2-3-1 in possession, they switched to a 4-4-2 off the ball, with the front two of Stindl and Pléa attempting to block off passes into Inter’s midfielders whilst the midfield four remained narrow.

The wingers tracked the ball when it moved wide and Gladbach generally stopped Inter from playing through them. On the other hand, Inter were happy to sit deep in their 5-3-2 and looked to spring quick counter-attacks. 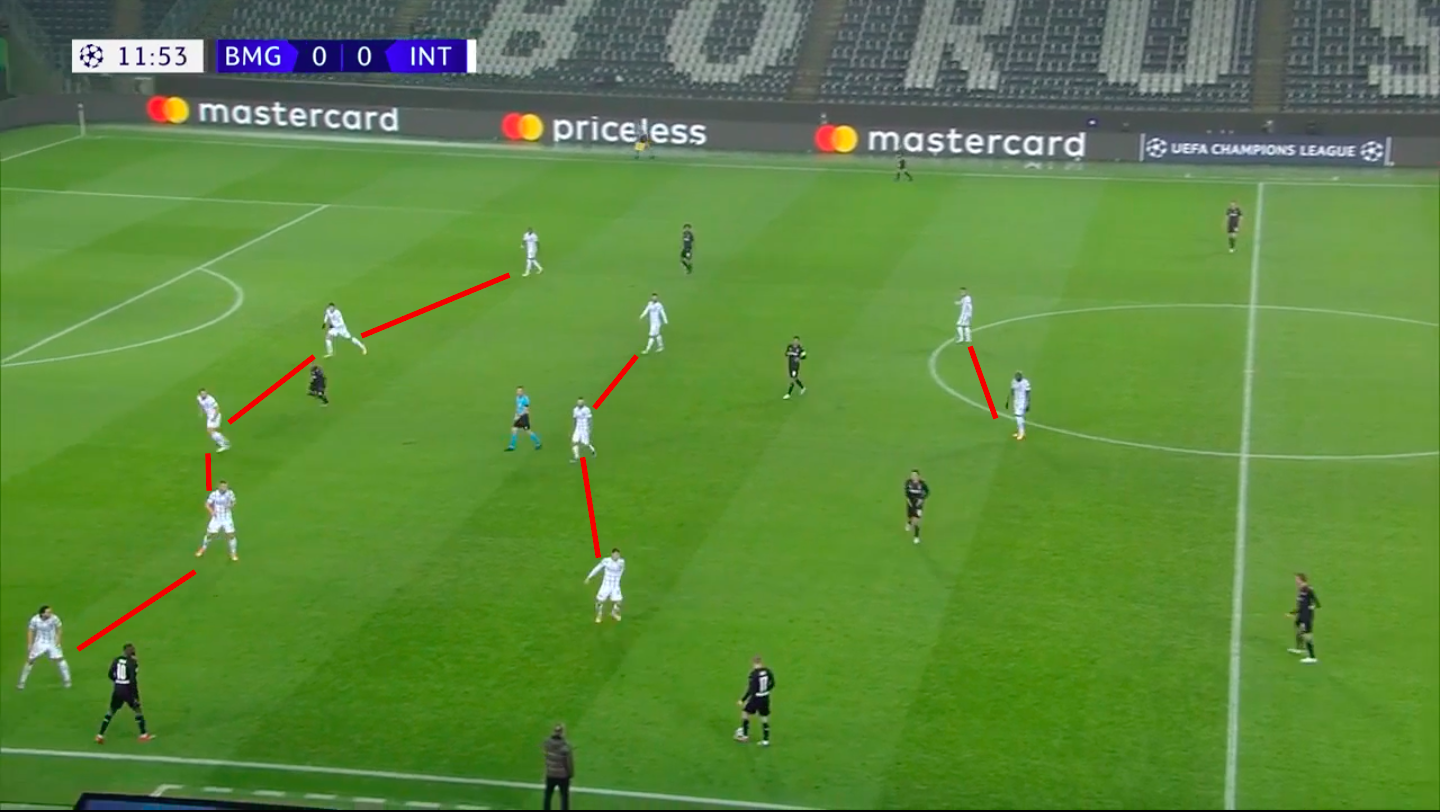 Inter were compact and limited Gladbach to few chances. Whilst Gladbach faced the task of breaking Inter down, Inter focused on releasing Lukaku and Martínez on the counter. The former was a constant outlet as Gladbach failed to consistently get close to him and deal with his physical presence, allowing Inter to sustain attacks and create goalscoring chances through simple long balls into the Belgian striker. 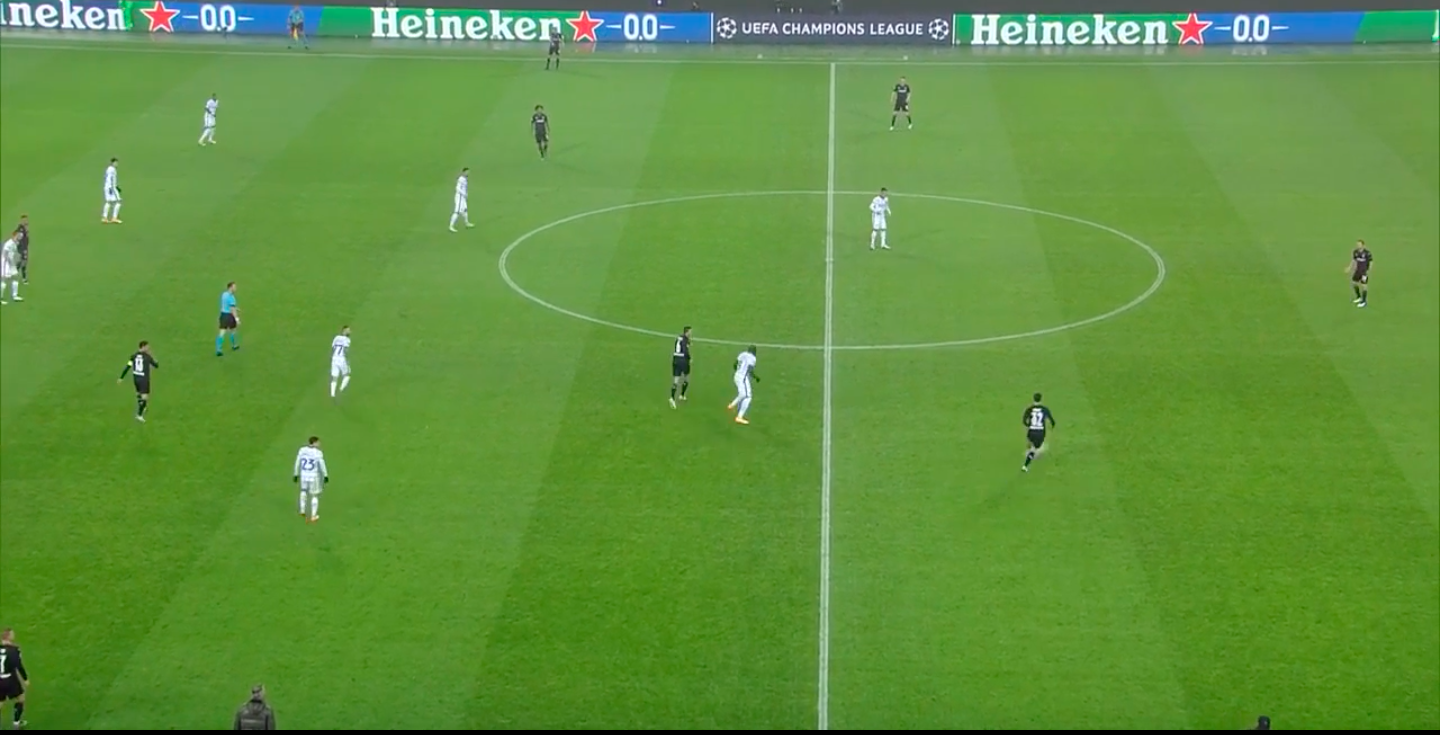 Gladbach created a back 3 in possession, with one of the central midfielders dropping into the backline, giving them a man advantage over Inter’s front 2. This helped them circulate the ball around Inter’s frontline. Inter’s 5-3-2 naturally congested central areas with the back 3, the midfield 3 and the front 2 positioned in central zones. Gladbach’s best chances were likely to come from wide areas.

The home side often moved the ball out wide but didn’t manage to consistently create chances against Inter’s deep block. They lacked any real penetration and needed more movement and quicker interplay in order to hurt Inter.

It looked as if Inter would go into the break with the lead after Matteo Darmian opened the scoring for Inter in the 17th minute when Gladbach failed to clear, leading to a successful Inter attack. However, Gladbach managed to put together a quick and effective attacking sequence from out wide and made it 1-1 on the stroke of half-time.

Lainer played a direct ball into the box which Stindl laid off to Lazaro. The Austrian’s cross found Pléa at the far-post and the Frenchman made no mistake in putting the ball in the back of Samir Handanović’s net. This was the type of move that would open Inter up. 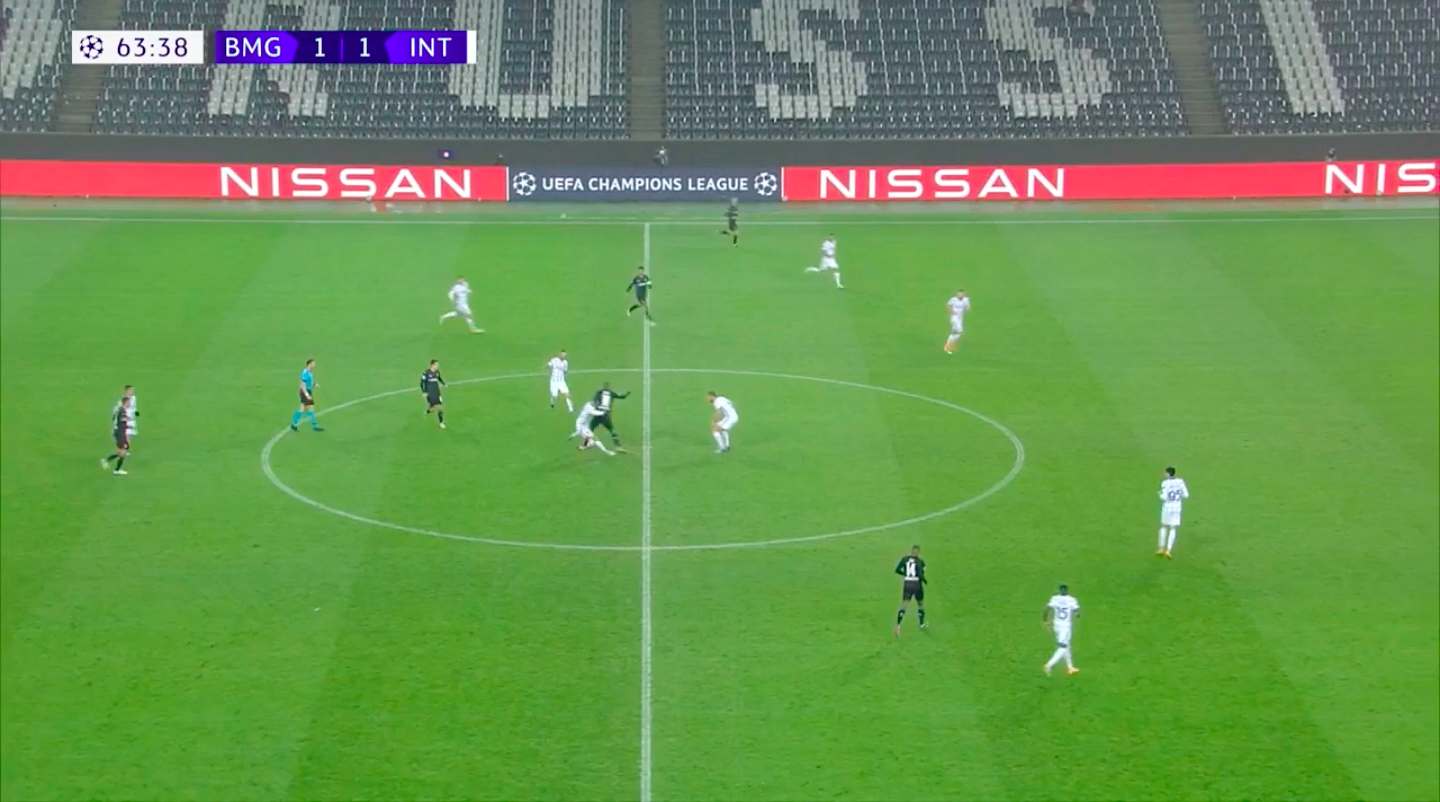 Inter’s central congestion was effective as it led to their second goal when Marcus Thuram was hustled by three Inter players which sprung together a counter-attack. Inter won the ball back and Brozović released Lukaku, who muscled off Zakaria (substituted on for Tony Jantschke at half-time) and scored with an emphatic right-footed finish in the 64th minute.

Rose switched to a back 5 in the second half, possibly to deal with Inter’s front 2, before reverting back to his original system as Inter’s goals meant Gladbach had to chase the game. 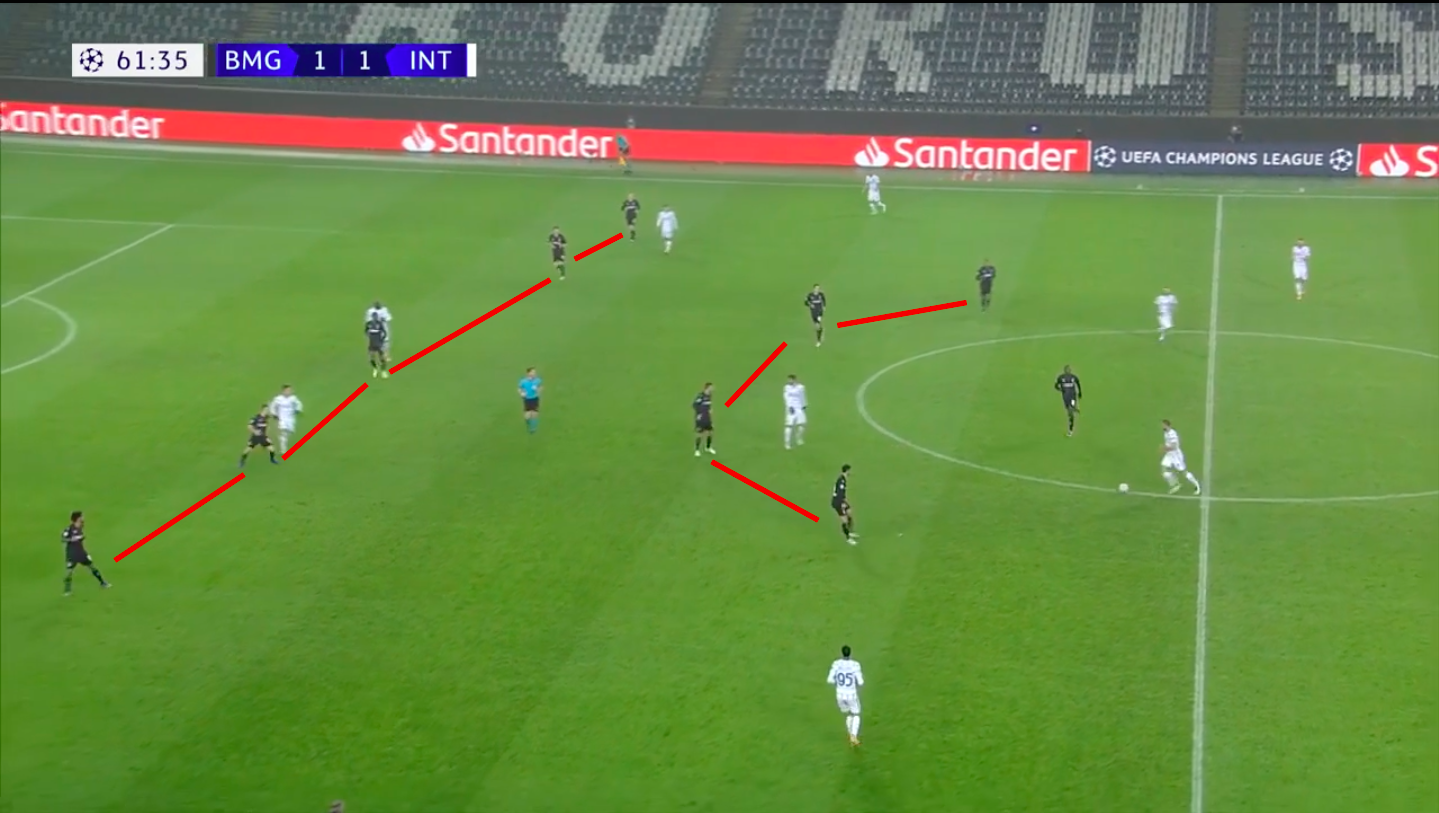 Gladbach defended in a 5-4-1 shape and pressed in a 5-2-3 shape. However, Gladbach’s press was poor in this shape and they didn’t look as comfortable as they did in their 4-4-2.

In the 72nd minute, Inter comfortably bypassed Gladbach’s front three and Brozović played a pass into Nicolò Barella, who released Achraf Hakimi (substituted on for Darmian in the 60th minute) in space. The Moroccan fired a cross into the direction of Lukaku, who made no mistake with the finish. 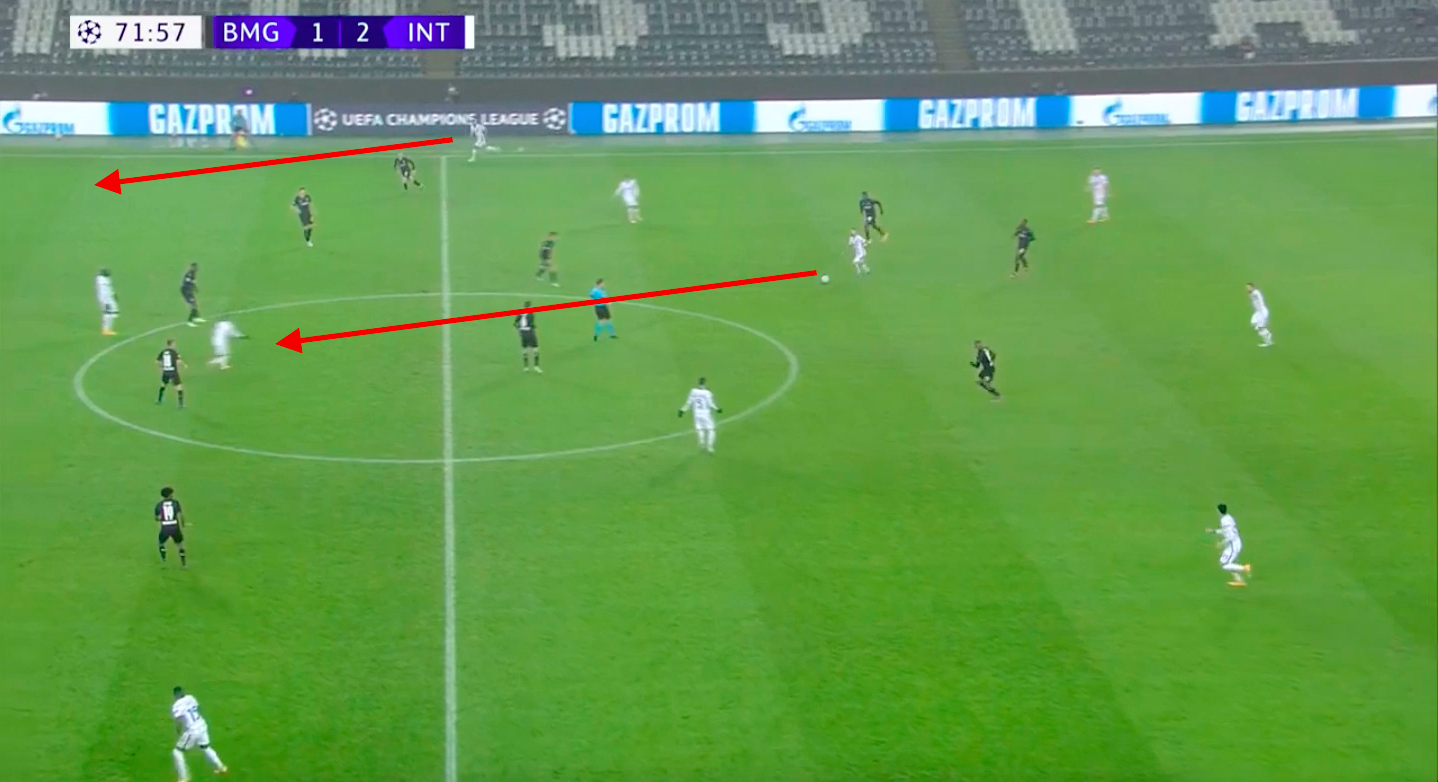 The game wasn’t over just yet. Pléa scored Gladbach’s second in the 75th minute after Barella was dispossessed, leading to a successful counter. Die Fohlen seemed to have completed the comeback when Embolo (substituted on for Stindl in the 70th minute) dribbled away from Inter’s pressure in midfield and released the ball wide. The ball was cut back to Pléa who finished into the far-post before VAR ruled the goal out.

Again, Gladbach almost created a goal by being effective in the wide areas. If they did so more against Inter’s 5-3-2, they could’ve possibly guaranteed their qualification to the knockout stages on Tuesday night. In addition, Marco Rose’s switch to a back 5 in the second half wasn’t successful and he’ll possibly feel that sticking with the 4-4-2 may have got him a result.

After Real Madrid’s loss to Shakhtar Donetsk, Group B is wide open heading into the final matchday. Gladbach can seal progression to the next round with a win or draw at the Estadio Alfredo Di Stefano, but if they lose, they can still go through if Inter and Shakhtar draw on Wednesday.

On the other hand, Inter must win at the San Siro in order to have a chance of progressing to the Round of 16; a draw between Gladbach and Real Madrid see Inter eliminated from the Champions League regardless of their result.