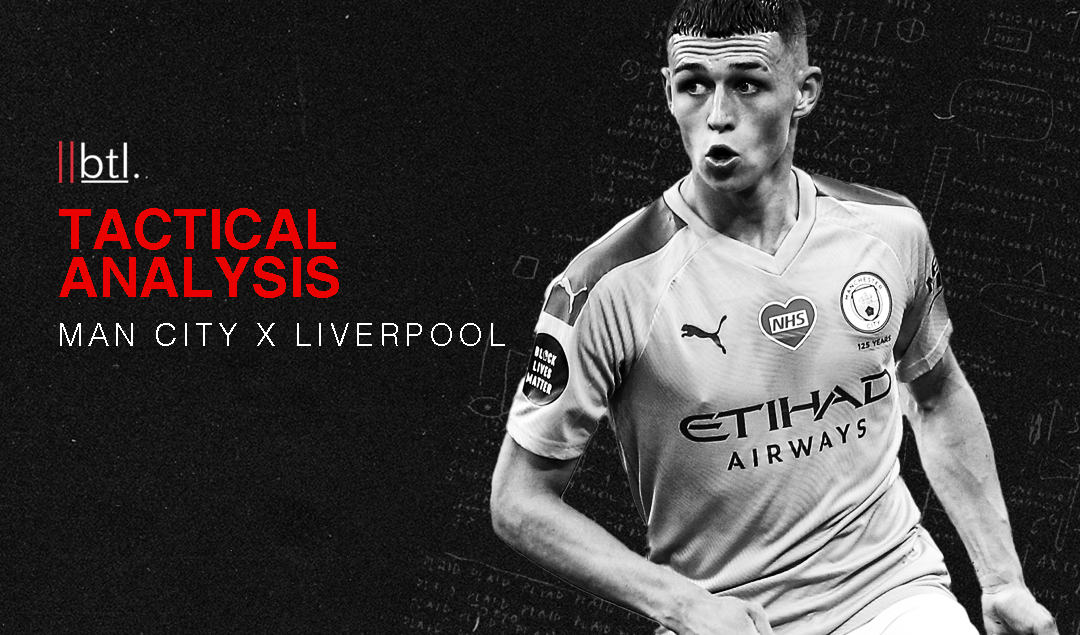 Pep Guardiola’s Manchester City took on newly crowned champions Liverpool this past weekend. Despite the Premier League being wrapped up following City’s loss against Chelsea, this game was an opportunity for City to warn Liverpool of next season’s title challenge.

Guardiola clearly had a plan in mind to spoil Liverpool’s title celebrations, and his team executed it to perfection, with the Sky Blues thrashing the champions at the Etihad by a 4-0 scoreline. 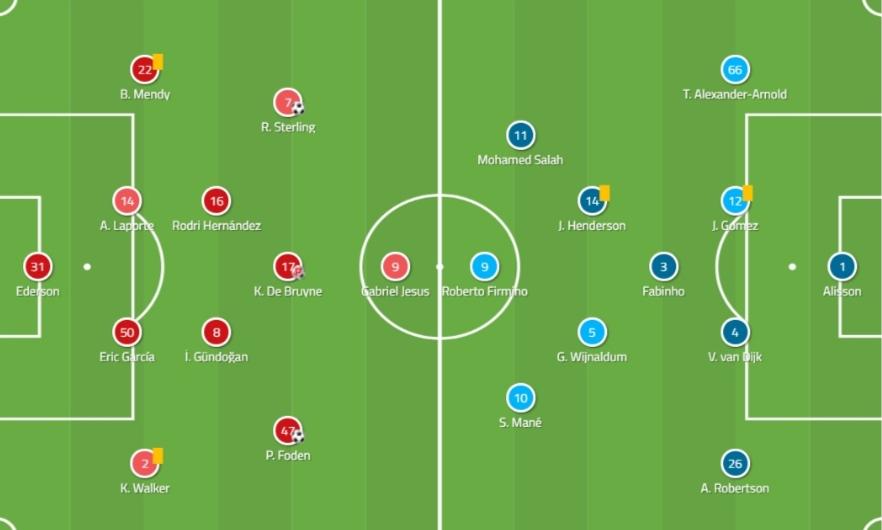 Manchester City usually opt for a 4-3-3 formation with a single pivot operating from deep to dictate play, but this time, Pep decided to field a double pivot. The double pivot was fielded to not only to provide numerical superiority against Liverpool’s high press in the first phase, but to also trigger one of Liverpool’s midfielders to come out of his zone and press high (known as ‘press baiting’). 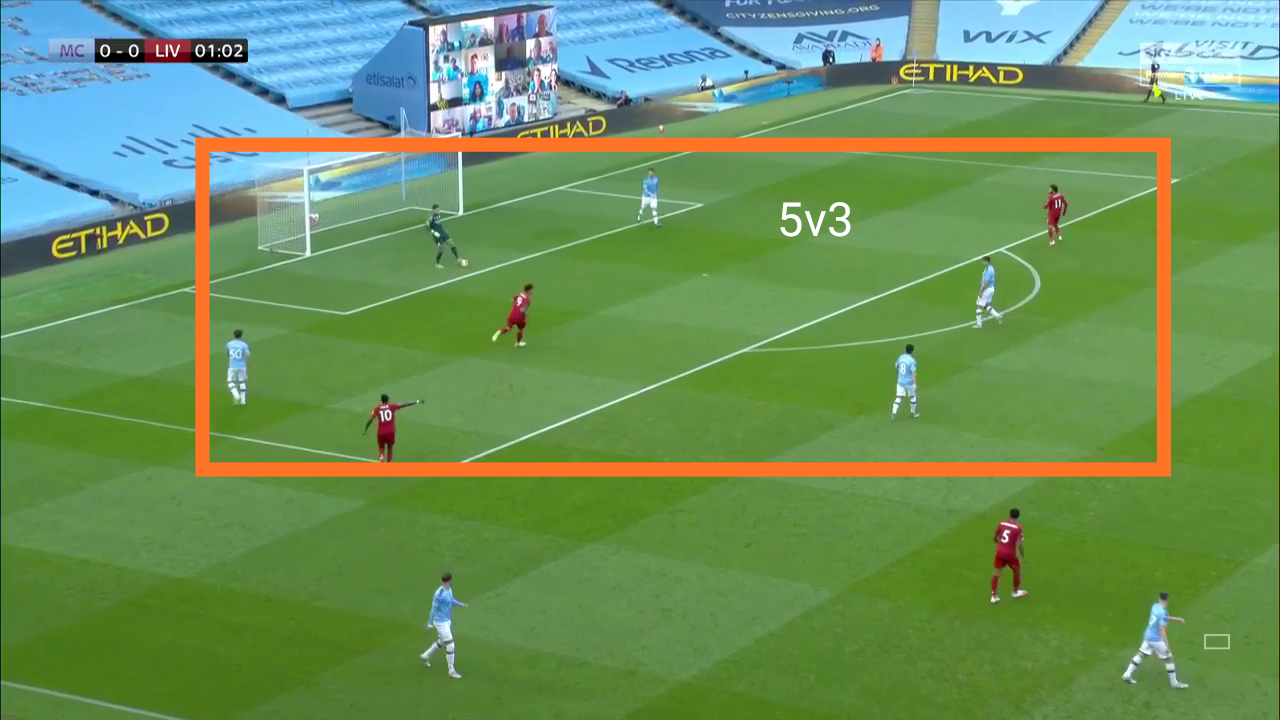 In the above example, Roberto Firmino, who usually cover shadows the opposition deepest midfielder, is overloaded by City’s double pivot. He can stop the pass from being played into Gündoğan, but instead leaves Rodri free to receive. 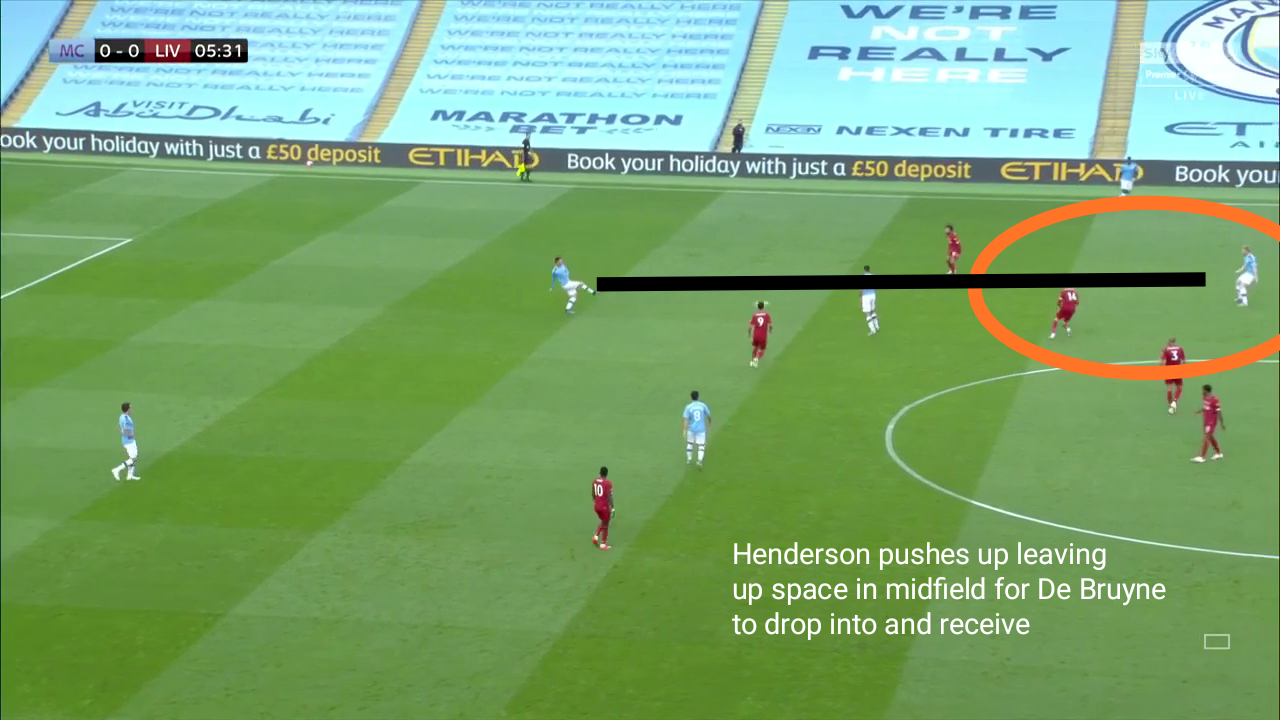 This forces the Liverpool midfield to step out of their zones and support the high press. But this is exactly what Pep wanted so that City’s attackers can drop in these vacant zones and exploit the gaps. 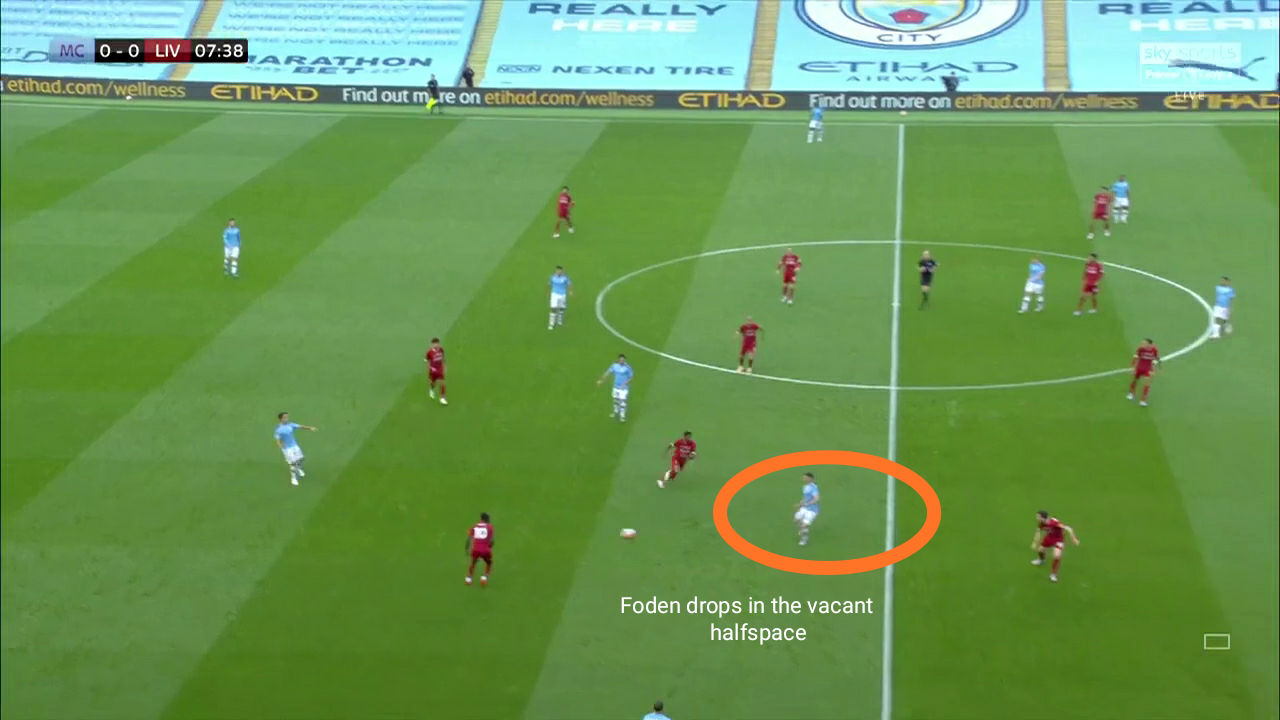 City’s build-up structure from goal kicks was also different from their normal setup. Here, Gündoğan drops to form a back three while De Bruyne drops to form a double pivot and create an overload against Firmino. 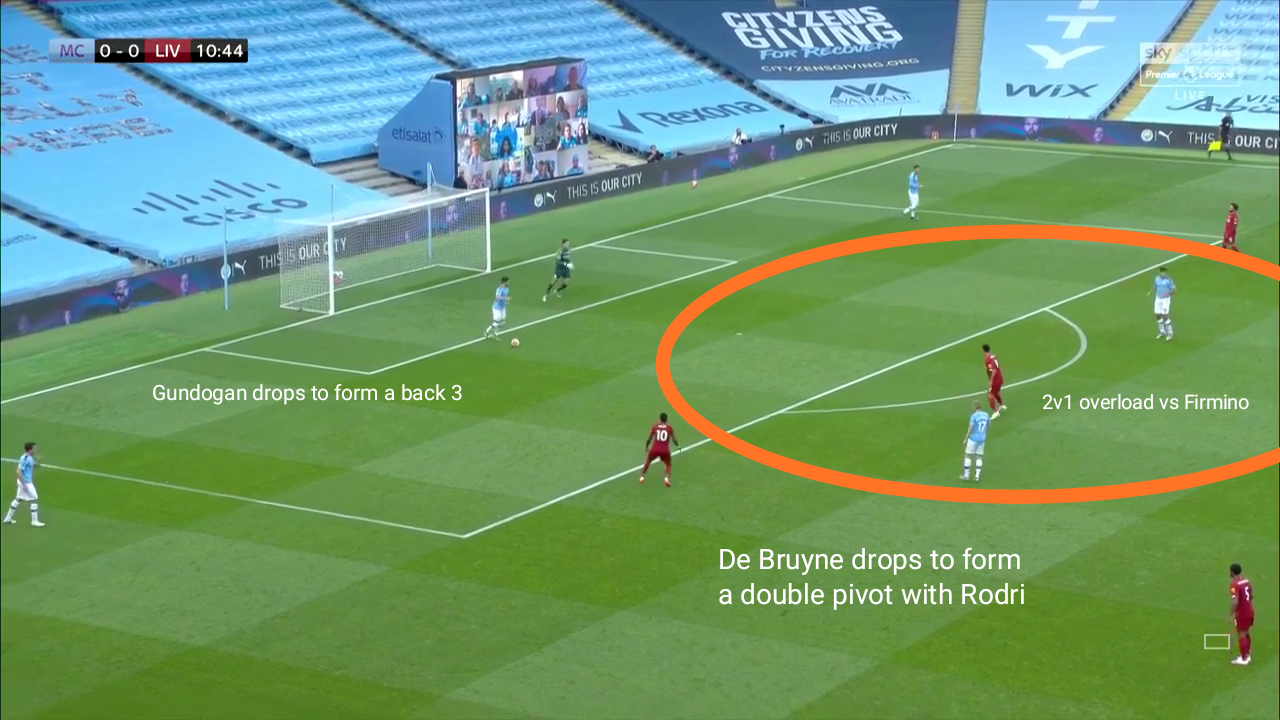 This had the same aim of tempting Liverpool’s midfield to press, thus leaving gaps for City to exploit. 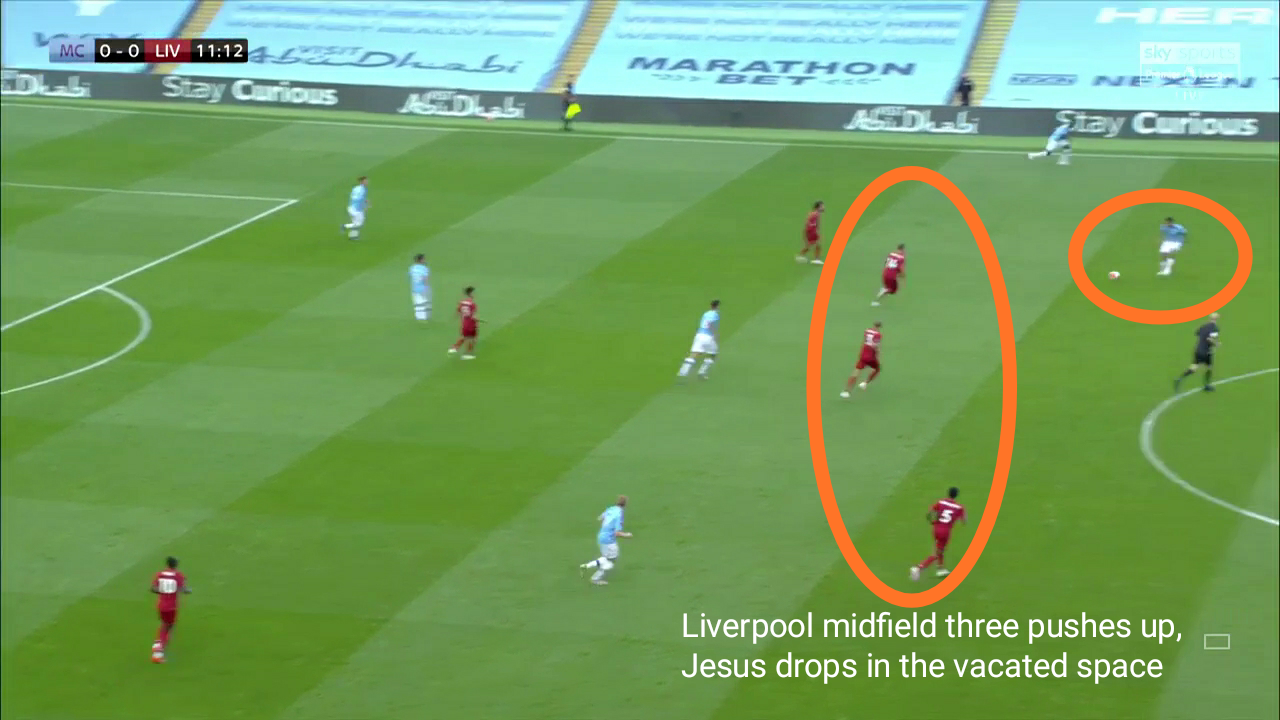 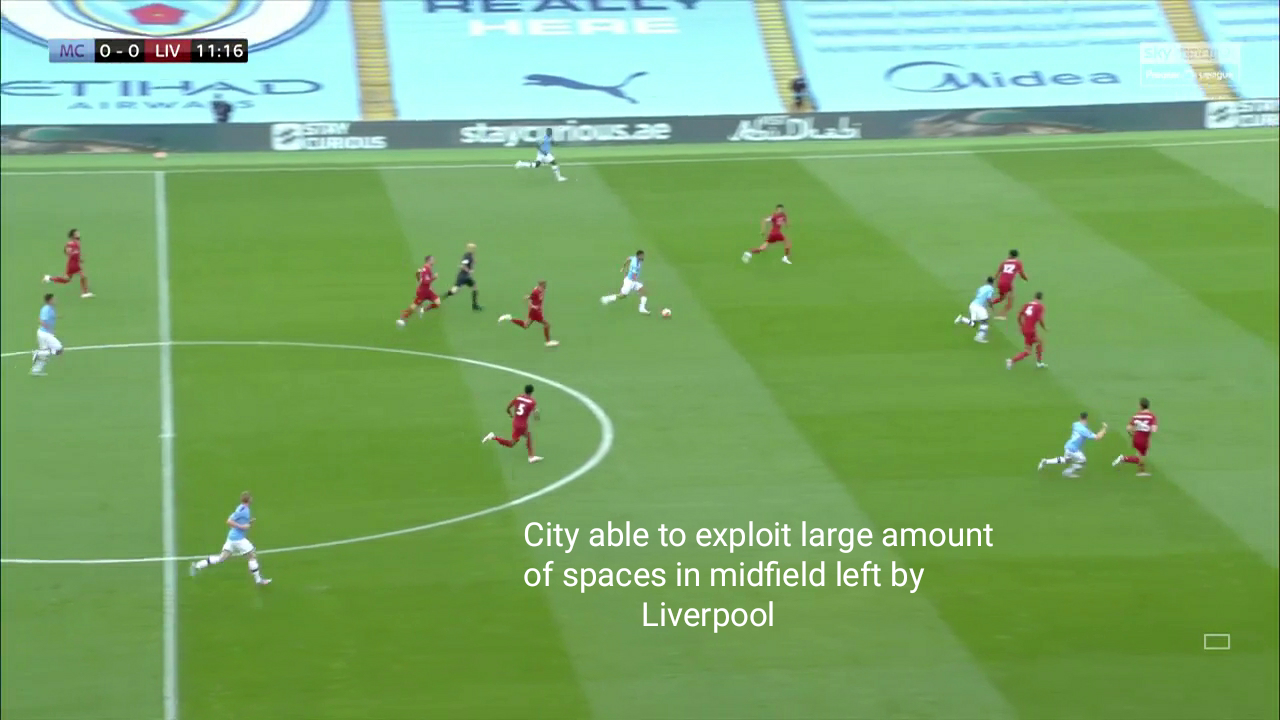 Unlike their counterparts, City decided to press in a 4-4-2 mid block, opting for defensive solidity. They chose not to press Liverpool’s centre back and instead decided to cover up central spaces and force Liverpool out wide.

But there were some problems for City in the first half as despite not opting to press high, their defensive line was still too high which gave a chance for the likes of Virgil van Dijk to play long passes in behind for the likes of Mohamed Salah and Sadio Mané (who are highly specialised in making these runs). They were able to create some really good chances exploiting this. 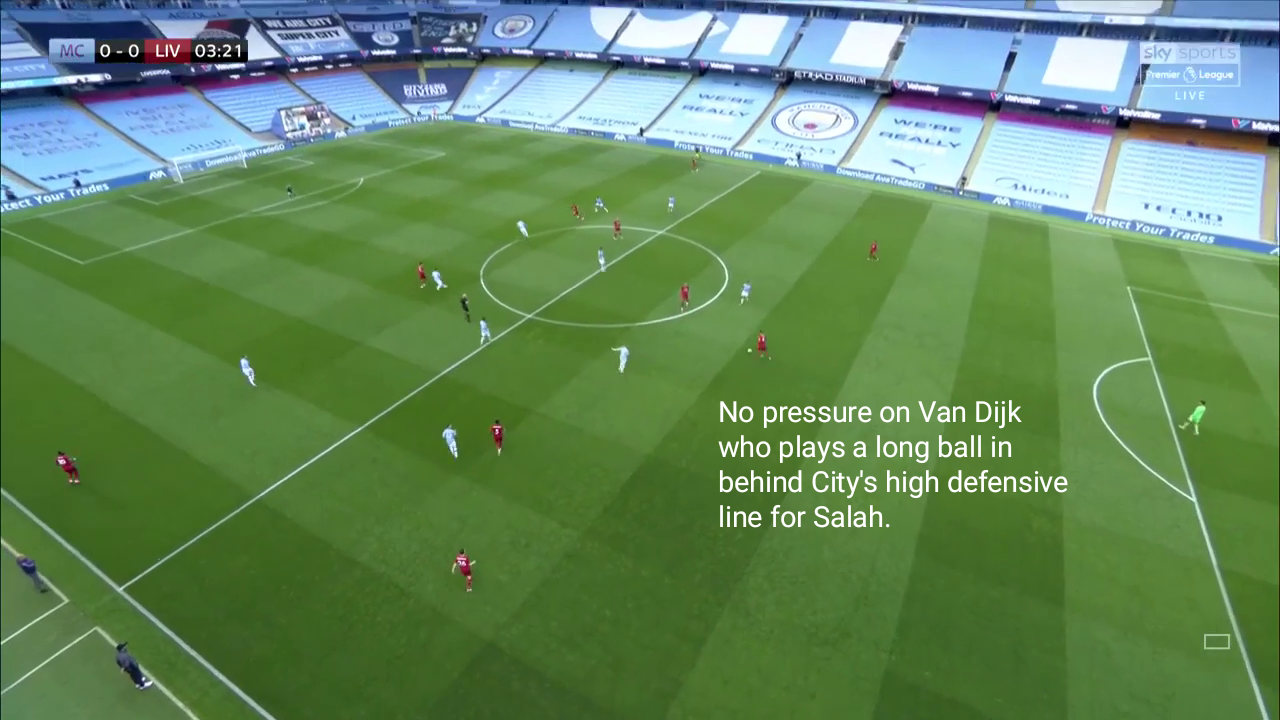 Trent Alexander-Arnold was also tasked with finding the runs of the front three from deep areas. 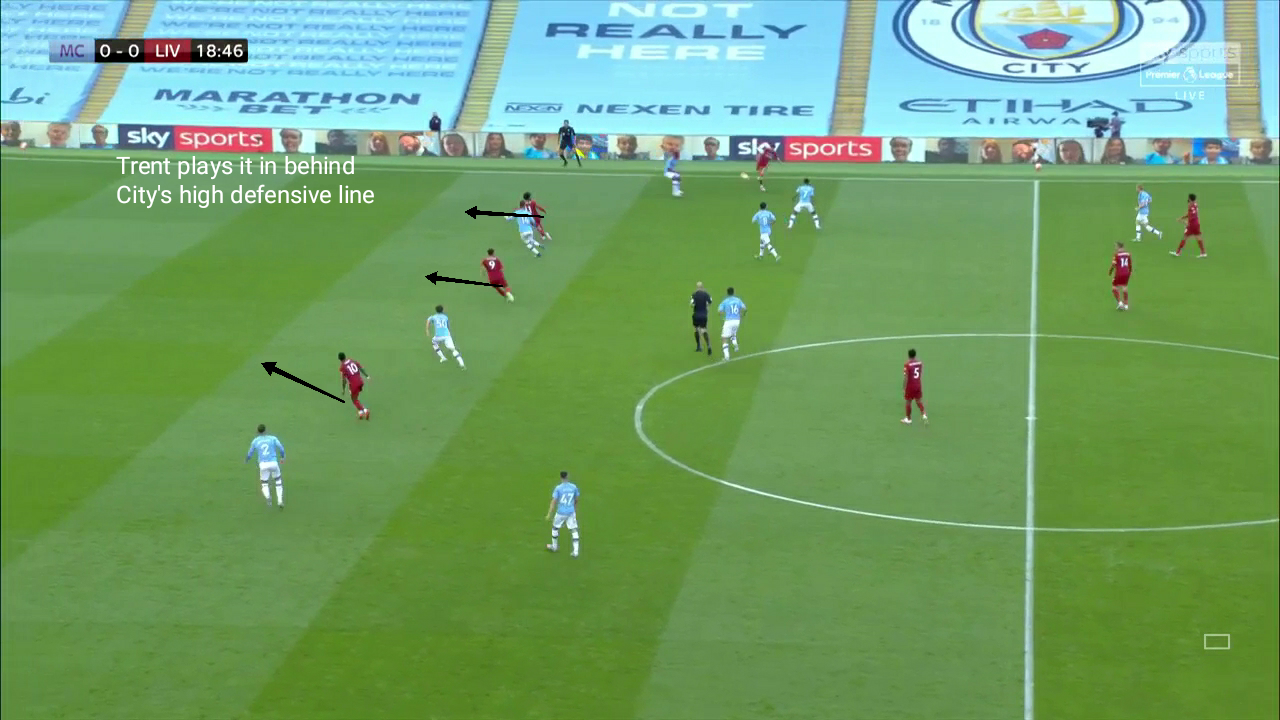 Fortunately for City, Liverpool’s front three had an off day in front of goal and missed some easy chances from these situations. 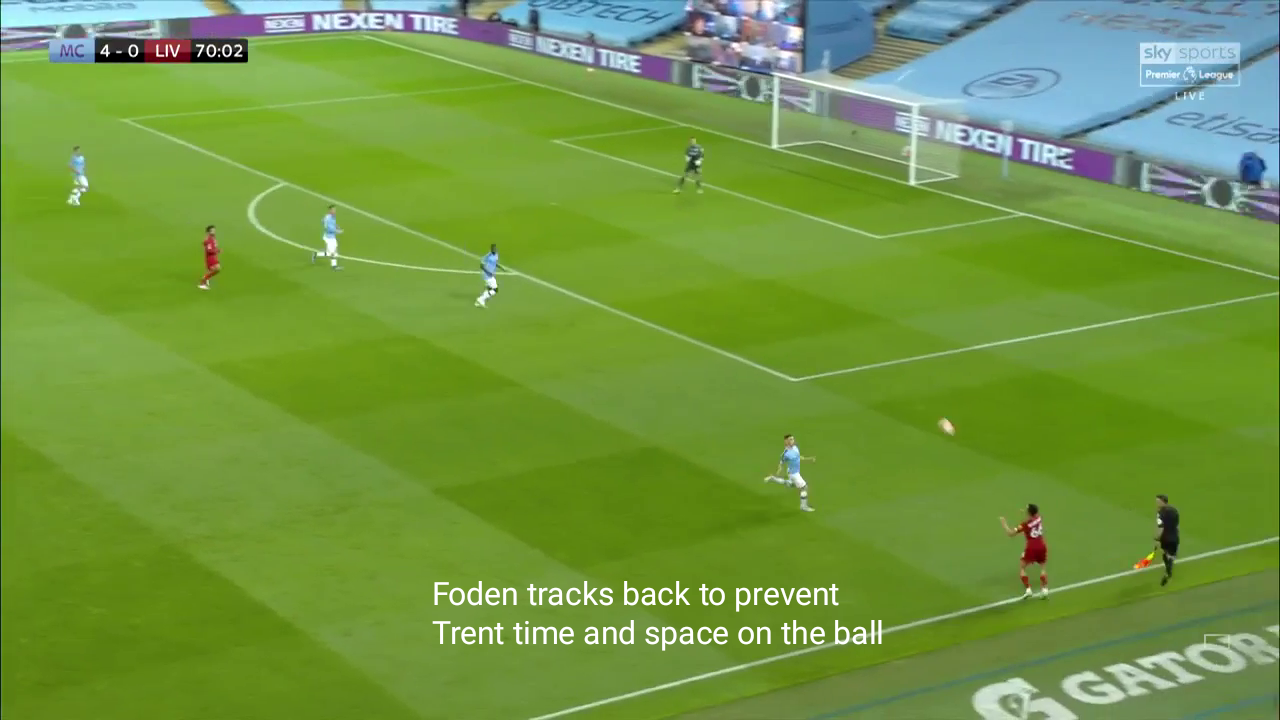 City also diverted away from their usual attacking shape in which the wingers stay wide to stretch the play and the striker is tasked to drop deep as a ‘false 9’.

In this game, Guardiola opted for a narrow front four in which Raheem Sterling would join Gabriel Jesus as a striker to provide runs into depth. Kevin De Bruyne and Foden would occupy the left and right flank and would come infield to exploit spaces in between the lines. Due to this attacking shape, City were able to cause Liverpool a lot of problems on offensive transitions. 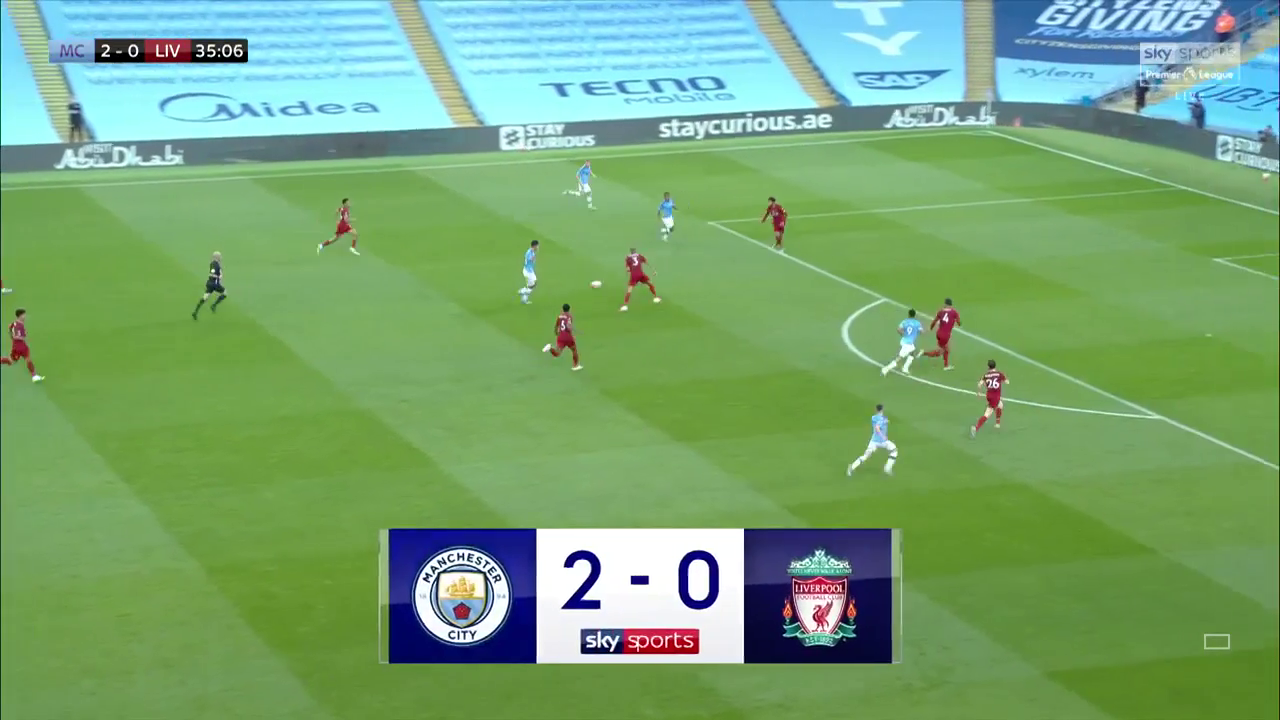 In addition to this, we saw a lot of intelligent movements and runs from City’s front four to manipulate Liverpool’s backline which resulted in City scoring two goals. 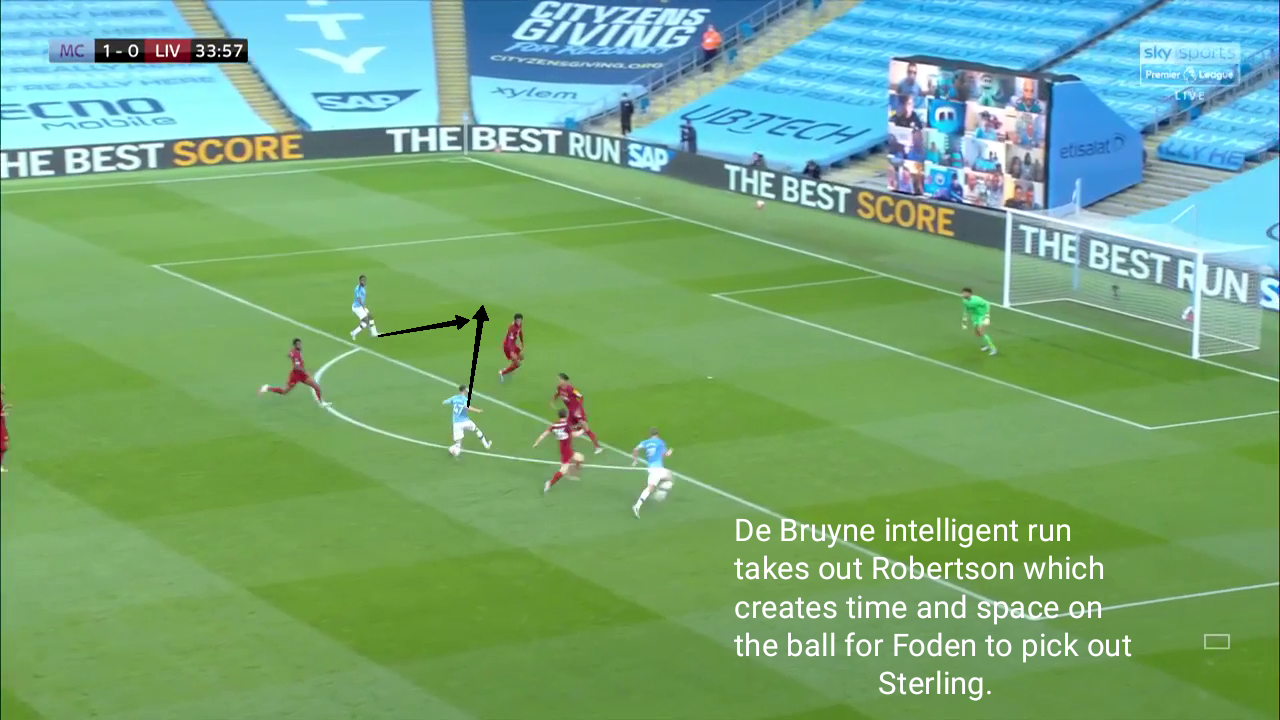 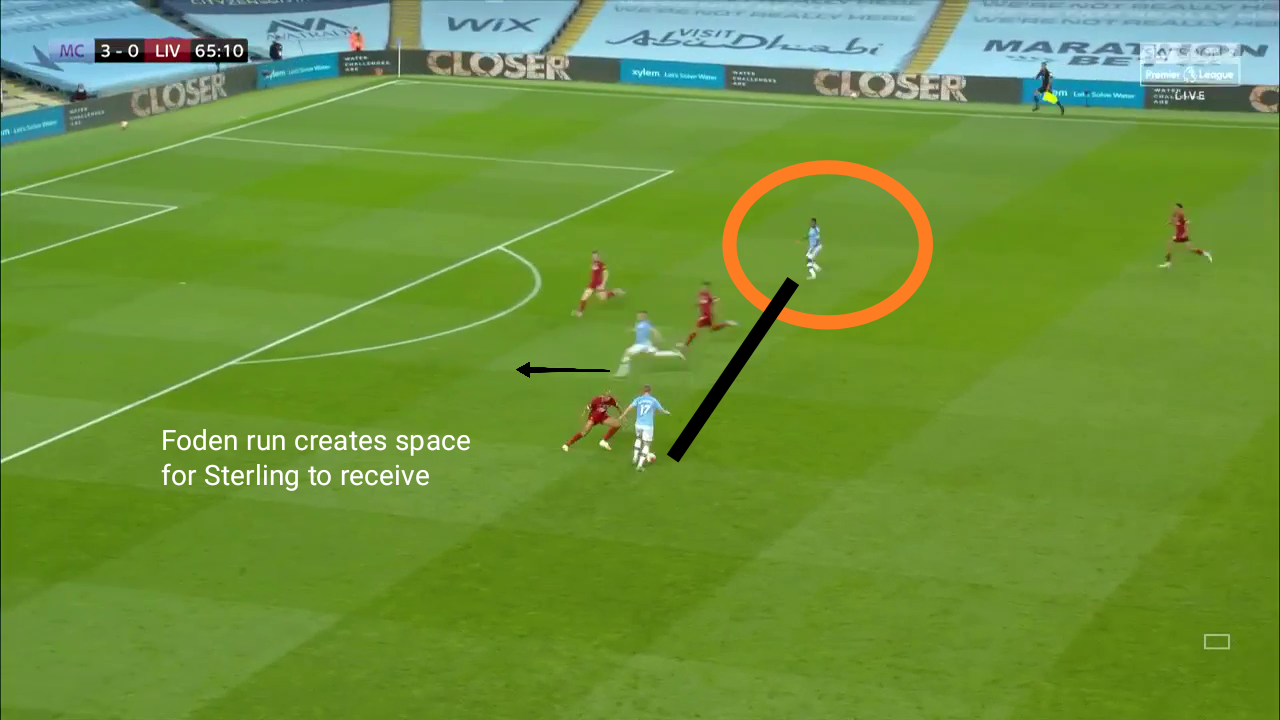 The Premier League might have been wrapped up a few days earlier, but City-Liverpool didn’t disappoint and produced another marvelous match as they always do.

Guardiola’s adaptations from his usual system both on and off the ball helped City to triumph 4-0 over the newly crowned champions Liverpool, and they were able to send a huge statement for next season.