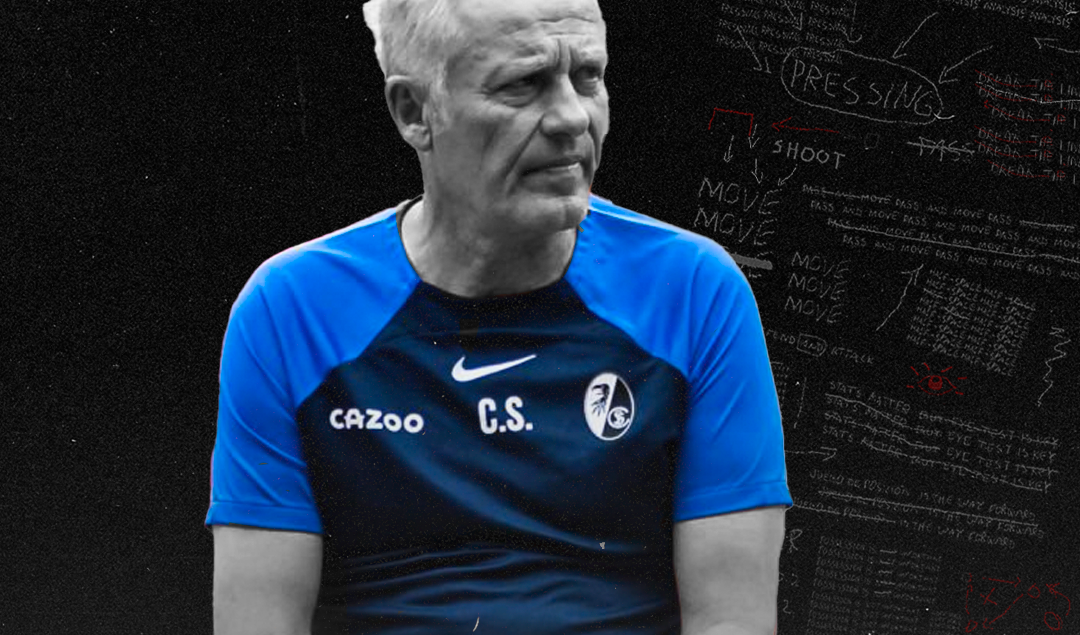 Despite a 3-1 loss on Wednesday night against RB Leipzig at the Red Bull Arena, Christian Streich’s Sport-Club Freiburg side have enjoyed a sensational start to the campaign which sees them sitting joint-second in the Bundesliga at the time of writing, only behind Union Berlin on goal difference.

The “Breisgau Brazilians” finished 6th last term under Streich’s guidance, their highest finish since a shock 5th-place finish in 2012/13 in the German’s second season in charge. Now in his 11th full season as Freiburg manager, Streich has experienced many ups and downs during his time at the helm, but has now managed to propel the club to its most promising position in decades.

After spending 16 years in the coaching ranks of the Freiburg academy, Streich was given the managerial post in December of 2011 when Marcus Sorg was sacked. He guided the club out of the relegation zone and up to 12th by the end of the season, before leading the team to an aforementioned 5th-place finish the next season and subsequent Europa League qualification. However, the club’s meteoric rise was short-lived, as they were dumped out of the Group Stages of the Europa League in 2013/14 and slumped all the way down to 14th in the Bundesliga.

Things would go from bad to worse the next season, as SC Freiburg would finish 17th in 2014/15, one point adrift of a chance at salvation in Germany’s relegation play-off, and thus they were automatically relegated to the 2. Bundesliga. However, instead of sacking Streich, Club President at the time Fritz Keller gave him the chance to right his wrongs and even extended his contract midway through the 2015/16 season.

The Stunning Redemption of Miguel Almirón

That summer Nils Peterson, who had been on loan at the club during the relegation season, joined permanently from Werder Bremen for just €2.80 million. His 21 goals the following season would fire SC Freiburg to the 2. Bundesliga title and automatic promotion back to the Bundesliga.

That wasn’t the only smart piece of business they would complete in 2015, however, as they also acquired a certain Vincenzo Grifo from TSG Hoffenheim for a measly €1 million. The Italian would score 14 goals and assist a further 15 during their promotion season, and score 6 and assist 7 the next season in the top flight to help the team finish 7th in 2016/17 despite ending the season with a -18 goal difference.

Peterson and fellow German striker Florian Neiderlechner, who was on loan from Mainz at the time, combined for 21 goals and 7 assists in the Bundesliga that year, and academy product Maximilian Philipp contributed an additional 9 goals and 2 assists.

Whilst Freiburg once again dropped off and narrowly escaped relegation in 2017/18, they continued to recruit and sell wisely. They sold Max Philipp to Borussia Dortmund for €20 million in the summer of 2017, which negatively impacted their squad in the short term, but was certainly the right call in the long term.

Although the permanent transfers of Neiderlechner and Robin Koch for €2.3 million and ​​€3.5 million respectively weren’t enough to maintain their position in the top half of the table, both would be sold for a profit in the coming years. The next season they would sell Turkish center-back Caglar Söyüncü to Leicester City for around €21 million after signing him from Altinordu in 2016 for less than €8 million.

Streich would then guide the club to three consecutive comfortable mid-table finishes; 13th in 2018/19, 8th in 2019/20, and 10th in 2020/21, all the while amassing a squad that would be able to compete in the near future. During that time, Vincenzo Grifo rejoined the club from Hoffenheim for €7 million, Maximilian Eggestein joined from Werder Bremen for €5 million, Woo-Yeong Jeong joined from FC Bayern II for €2 million, Philipp Lienhart joined from Real Madrid for €2 million, and Mark Flekken joined from MSV Duisberg for €2 million. All of these are important first-team players to this day.

How Club Brugge Are Taking the Champions League by Storm

The promotion of academy product Nico Schlotterbeck to the first team in 19/20 was also an important piece of the puzzle, as, after a successful loan spell at Union Berlin, the German international center-back would play a huge part in SC Freiburg’s impressive 6th-place finish last season, as well as their run to their first ever DFB-Pokal Final in which they were only defeated in penalties by RB Leipzig. Schlotterbeck would win Man of the Match in that final, prompting a €20 million summer move to Borussia Dortmund for whom he has started all 14 Bundesliga matches so far this season.

Despite that sizable loss, Streich and the Freiburg board would find yet another brilliant solution: the return of Matthias Ginter. The 28-year-old German international re-joined his boyhood club this summer on a free transfer after his contract at Borussia Monchengladbach expired, and he has been the perfect replacement for Nico Schlotterbeck. Freiburg also signed Michael Gregoritsch from Augsburg on a free, and both have been among their best performers this season alongside Vincenzo Grifo.

Now, all this intelligent recruitment is paying dividends for Christian Streich’s team. Freiburg have kept 8 clean sheets in 14 games this season, the most in the Bundesliga, and only Bayern Munich have conceded fewer goals thus far. The 27 points they have amassed in the first 14 games of the campaign is the most they have ever accrued at this stage of a season in club history.

Yet the most remarkable fact about Freiburg’s resurgence under Streich is that their net transfer spend has been positive in five of the last six seasons. They have sold for significantly more than they have bought since their promotion back up to the Bundesliga in 2016, yet they have improved drastically anyways. This is due in large part to the incredible management of Christian Streich.

During Wednesday night’s defeat to Leipzig, the commentator noted that “RB Leipzig is a team full of stars, but SC Freiburg’s star is the man in the technical area.” That line speaks volumes. Although he and the front office have done a magnificent job in recent transfer windows, this success wouldn’t be possible if it weren’t for Streich’s ability to get the best out of all these budget signings over the years.

According to Transfermarkt, the total value of SC Freiburg’s squad is just €175.60 million, which is below even that of AFC Bournemouth, who are adjudged to have the least valuable squad in the whole Premier League. Despite this, Freiburg have just comfortably won Group G in the Europa League, going unbeaten across all 6 group stage games during which they scored 13 goals while only conceding 3 en route to 4 victories. Manchester United, in contrast, were unable to win their Europa League group with a squad worth €752.60 million, finishing second behind Real Sociedad.

And thus, SC Freiburg have been rewarded handsomely for sticking with Christian Streich through the ups and downs of his tenure as manager. The combination of brilliant transfer business and incredible management over recent years has seen them rise all the way into the Champions League spots and the Europa League knockout stages, and although the competition is fierce, there’s no telling how far this Freiburg team can go with Streich at the helm.