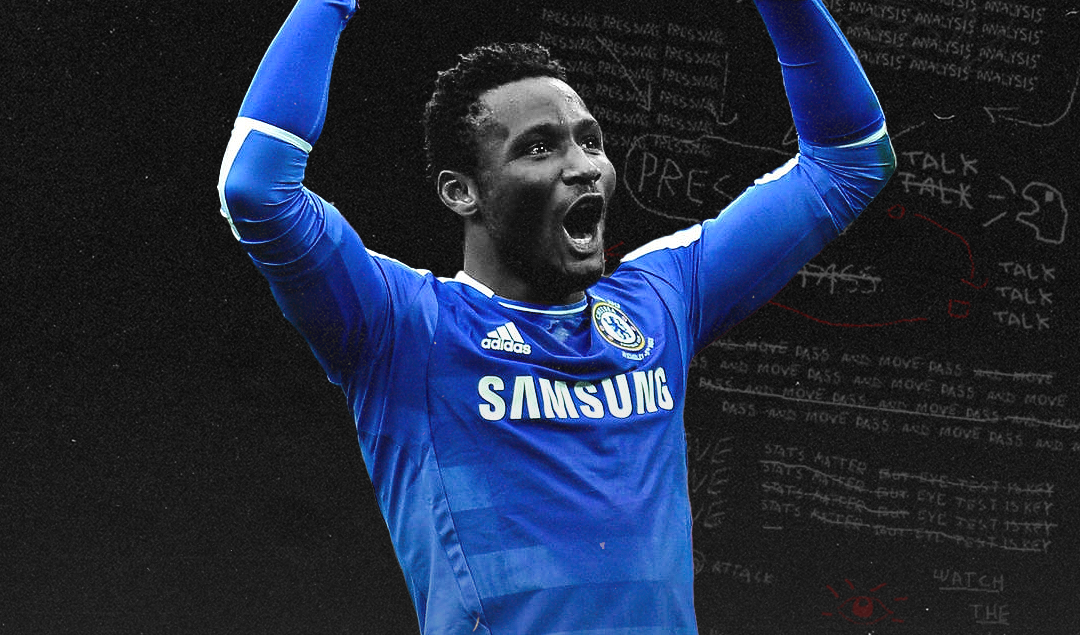 As far as football fans are concerned, every player is either underrated or overrated, and it’s safe to say John Obi Mikel falls in the former category. The Nigerian midfielder is one of those that were never really appreciated as much in their prime, Mikel’s best years were with Chelsea and even now he’s only celebrated with hindsight.

Mikel spent the majority of his 9 and half seasons at Stamford Bridge as a squad player, and although he did have some good times, he was never really a key player for the Blues. It’s easy to just assume he wasn’t good enough to be an important part of the Chelsea setup, but there’s reason to believe Mikel may have just been a casualty of the way football was played at the time.

His peak year was 2013, where he finished second behind Yaya Touré for CAF player of the year having helped Nigeria win the African Cup of Nations, just a year after he helped Chelsea win the Champions League. For a defensive midfielder who neither scored nor assisted a goal in 38 games across all competitions for Chelsea to be widely regarded as the best African player in the world at the time, he must have been really good at his job.

So why wasn’t he a regular? The simple answer is that football just wasn’t as crazy about the ‘Deep Lying Playmaker’ then, as it is now. Although 2013 wasn’t that long ago, the dynamics of the midfield was very different from what it is now. For most of the 2000s and throughout the 2010s, the Number 10 was the prized asset of every midfield.

That position was where everything happened, the best passer on most teams played there because he’s expected to dictate the tempo and create the majority of the team’s chances. While the defensive midfielder was always the proverbial tough guy, the generic hard man who does all the dirty work, dives into every tackle, covers some ground but does little else.

This was the era Mikel came up in, a lot of the attributes he possesses went under the radar. His composure, press-resistance, accurate passes, technical ability, were treated as extra rather than the focal point of his abilities. Unlike what we see today, the defensive midfielder wasn’t expected to spend much time on the ball. If they were, Mikel would have arguably been the best to ever do it.

That’s not to say teams in that era didn’t deploy the Deep Lying Playmaker role at all, Xabi Alonso and Andrea Pirlo are the most pertinent examples of that. Defensive midfielders who carried most of the creative burdens for their respective teams, and played most of their careers at around the same time as Mikel.

And even these legends, for all their prowess in the Deep Lying Playmaker role, weren’t made to carry as much responsibility as Defensive Midfielders today do. Players like Jorginho, Sandro Tonali, Rodri, Thiago Alcântara, Nicolò Barella, Thomas Partey and many others like that are required to be comfortable on and off the ball.

DMs today are expected to have great ball control, composure, be comfortable in tight spaces, good outlet passing, great vision, high football IQ to read the game perfectly in attack and defence all while still doing their primary job as a defensive midfielder, which is breaking up play and protecting the defence.

There’s no denying the fact that these guys have become much more valuable than they used to, the transfer fees tell you all you need to know about defensive midfielders being in high demand. In the last three years, Manchester City paid £64 million for Rodri, Arsenal paid £45 million for Partey, Liverpool paid £39 million for Fabinho and £25 million for Thiago, Chelsea paid £50 million for Jorginho, Inter paid £43 million for Barella and on and on it goes.

The type of money clubs would only spend on players that guarantee attacking returns in the past. It has now been understood that goals and assists are not the only way to contribute value to a team. Mikel would wish that realization had happened much sooner, his lack of end product contributed greatly to him being so underrated, 17 goals and 31 assists in 565 career appearances so far are all anyone is willing to focus on when you bring him up, but he’s shown he can help the team in other ways very few can.

Even as he approaches 34 years of age, Mikel continues to exude class on the pitch for Stoke City who he currently represents. Even though the legs are now gone, you can still see the difference between him and his younger Potters teammates when he plays. With the benefit of hindsight, it won’t be absurd to say that if John Obi Mikel was in his prime today, playing as he did in 2013, then he would be one of the most valuable players in the world.