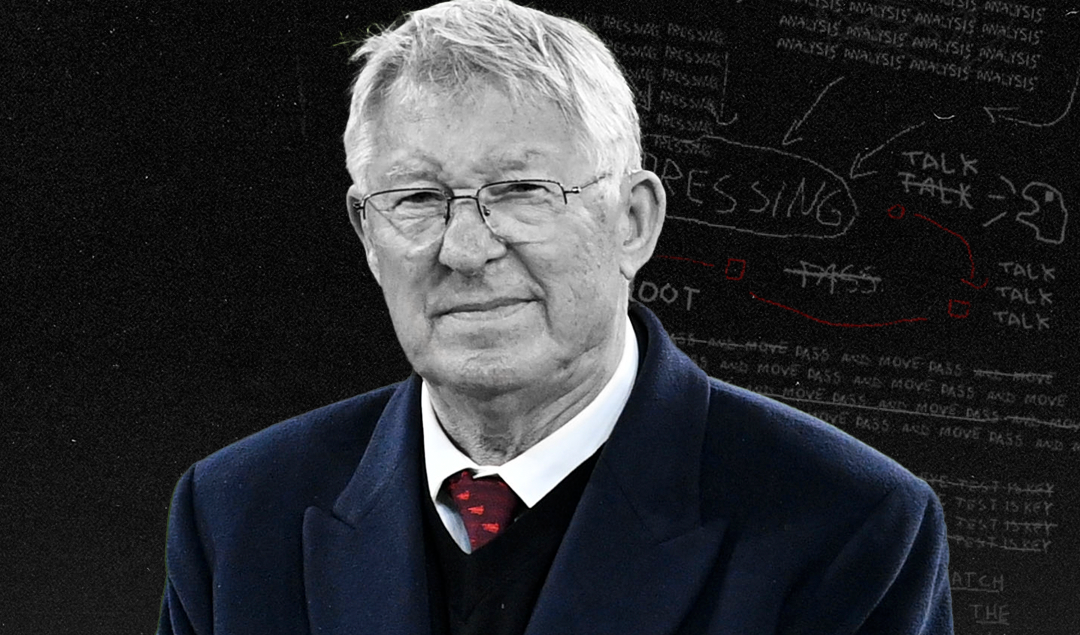 During his 26-year reign at Manchester United, Sir Alex Ferguson built various legendary teams that enjoyed success over the years, most notably the 1999 treble-winning side. However, his most successful period in terms of trophies was from 2007 to 2009, where he won three consecutive Premier League titles, one Champions League title, one FA Cup, one FIFA Club World Cup and two Community Shields.

In the decade that has followed, only Pep Guardiola’s Barcelona has come close to reaching the dominance that Sir Alex Ferguson’s Manchester United has between 2007 and 2009. The Old Trafford faithful yearns for the glory and spellbinding football that was witnessed in the Theatre of Dreams during that brief spell.

To understand Manchester United’s tactics in that period, you need to understand what they tried to achieve when building the team. Dutch technical coach and United assistant manager Rene Meulensteen, alongside Portuguese coach Carlos Queiroz, helped Ferguson out in building the team and training the fundamentals surrounding it.

Rene Meulensteen recently spoke on a podcast with Stratford Paddock outlining his curriculum under Ferguson, who pulled him into his office and described to him how he imagined United to play. He wanted United to press, and press high in numbers.

If the opposition beat them when pressing, Ferguson wanted his team to drop and regroup, wait for a pressing trigger, often an individual player, or force the ball out wide.

If United didn’t press, then United should be able to defend from a block, remain compact in shape with no distance given away, and from there they could launch a counter-attack. Ferguson emphasized being able to defend on set pieces and score from them. “Possession is key,” Sir Alex claimed.

There are three momentums in the game. The first momentum is initiative: the team that has most of the ball and the second: that’s where United will try and create chances. If United score goals, they control the game. If they score another one, they can dominate the game.

The third is rhythm. He emphasized the players’ understanding of rhythm. When in possession, how high or low does the tempo need to be? Does United need to keep the ball? Can they protect a 1-goal lead by having the ball? The key here was to have possession with a purpose.

How Manchester United Built the Most Potent Attack in Premier League History: Part 2: Reaching the Pinnacle

On the attacking side of the game, his curriculum only had four words written on it and it describes United under Sir Alex very accurately. Pace, Power, Penetration and Unpredictable. Now, this might sound ‘modern’ mainly because it was. The fluidity in the team’s positional play made it one of the most tactically advanced sides of its generation.

The base of the team was formed by the goalkeeper Edwin Van de Sar who was a genuine sweeper-keeper, the two ball-playing centre-backs Rio Ferdinand and Nemanja Vidić, as well as the fullbacks Patrice Evra and Wes Brown, who filled in at right back due to Gary Neville’s long term injury. They made the most appearances among the whole squad and were the key figures to United’s success.

Ahead of them, United made tactical tweaks according to the opposition. Ryan Giggs was far from his youthful days at this point, so he slowly transitioned into a wide midfielder. Owen Hargreaves and Park Ji Sung were also entrusted in this role.

Michael Carrick and Paul Scholes played the most games out of any central midfielder in the squad, but Darren Fletcher and Anderson also played at times. The front three or the remaining three in the lineup would usually be Wayne Rooney, Carlos Tevez and Cristiano Ronaldo, although Dimitar Berbatov and Anderson too played in the attacking roles. 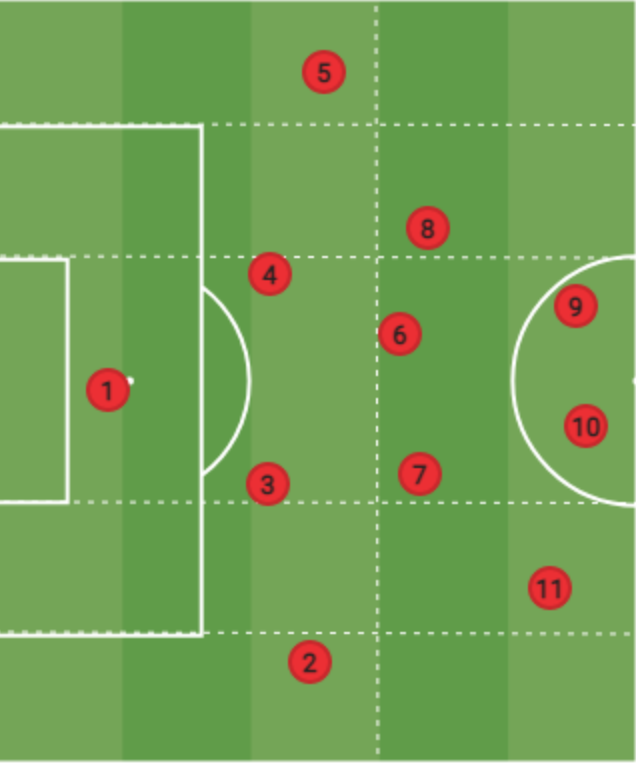 This created an asymmetrical 4-3-3 formation, and the fluidity among the players was what made the players so hard to mark. The team could shift across the field and create a genuine 4-3-3, with players dropping or joining the attack, players holding the width, and exchanging positions.

The wide midfielder would tuck inside the flanks, pushing the midfield line to create a three-man midfield in order to give license to the Winger/Wide Forward to join the attack, thus creating the 4-3-3.

Immediately after losing the ball, United would look to counter-press in an aggressive man-to-man scheme. If beaten on the press, United would drop into their mid-block where they would maintain structure and press in a 1+3 support manner. 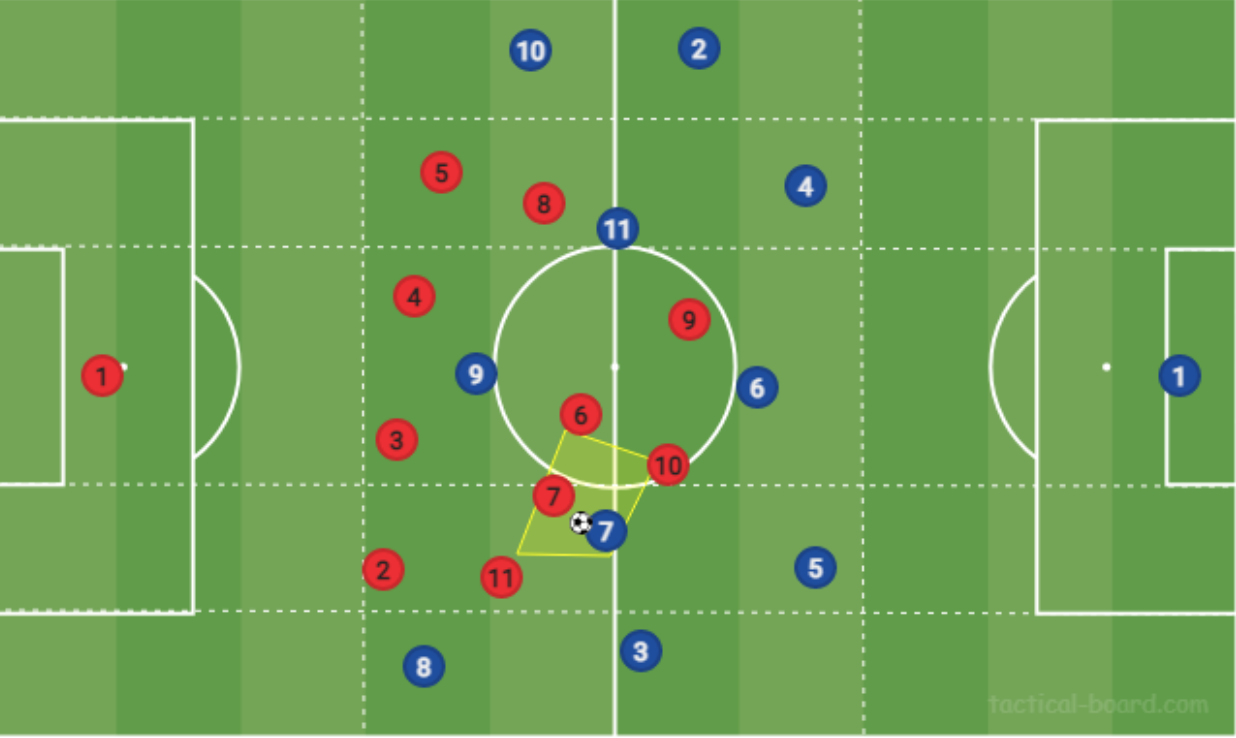 After winning the ball, United would attack with pace and look for penetrative passes, while a five-man rest defense would be set up to ensure balance and not be countered themselves and exploited defensively.

Manchester United would largely build in a 2-2-4-2, but this shape was very fluid and could look like a 3-3-2-3 formation as well depending on the situation. But because most teams from that era were lining up in a 4-4-2 it was a custom for United to form a 3-man defense with Carrick acting as the half-back, dropping into the backline and allowing the fullbacks to push higher up the field.

The three-man backline was used to restore man advantage, and Scholes would now play as the deep-lying player in the single-pivot while the wide midfielder would now play as a box-to-box player, thereby helping the progression from deep and connecting the attack. This player can also end up as no.10 depending on opposition and situation. 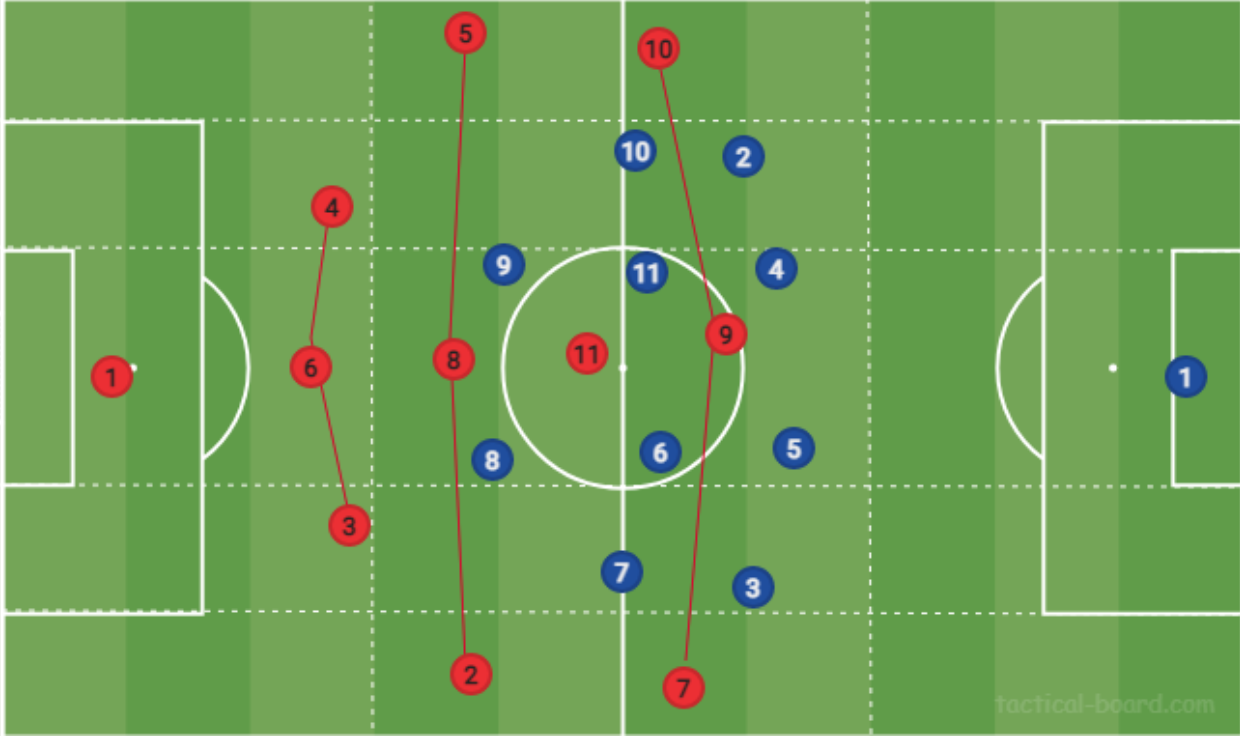 The 2-2-4-2 was used when United knew there would only be one player applying pressure on the centre-backs, hence only a 2v1 situation is allowed in defense. The fullbacks push high and wide while the two wide players tuck inside and play as semi-no. 10., forming a double pivot. 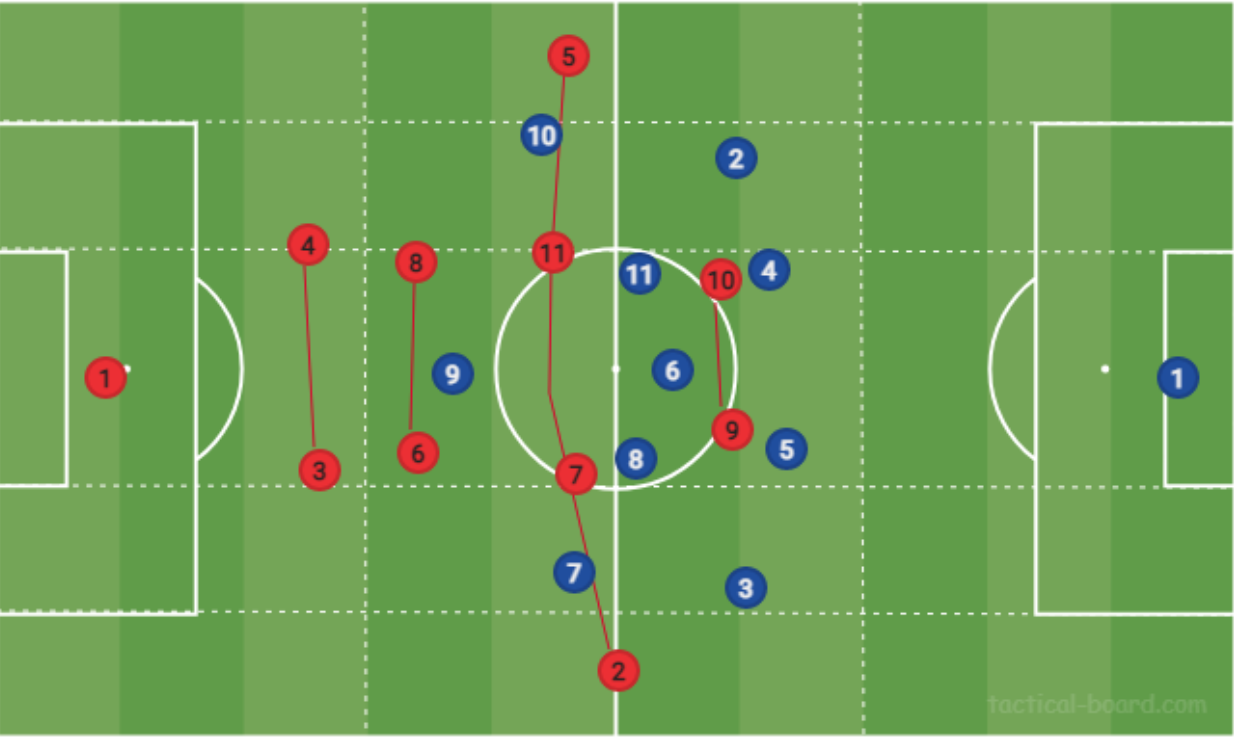 These structures allowed United to stretch the pitch vertically, and from here, United could look to play long balls as the front three or two would have enough speed to get in behind the defensive line. This could also pin the line backward, creating holes between the midfield line and the defensive line which could be exploited by the midfielders or semi no.-10s running into space.

United sought to have possession with purpose and used their excellent ball-playing defenders and the passing ability of Paul Scholes, Owen Hargreaves and Michael Carrick to pass forward through the lines with penetrative passes and link higher up the pitch with quick one two passes. In the 2007/08 season, United only failed to score in three games and scored at least once in a game from December until the end of the season.

While transitions were a trademark under Sir Alex Ferguson, they were just as lethal with open play. While playing against low blocks, United would form a 2-3-5 shape in attack, with the ball-side fullback joining the attack and the ball-side wide player tucking in.

The far-side wide player would hold the width and the far-side full winger would join the midfield, as Carrick would only drop deep again in order to restore man advantage. The far-side fullback would stay ready to either drop back into position or execute an underlapping run whenever possible. 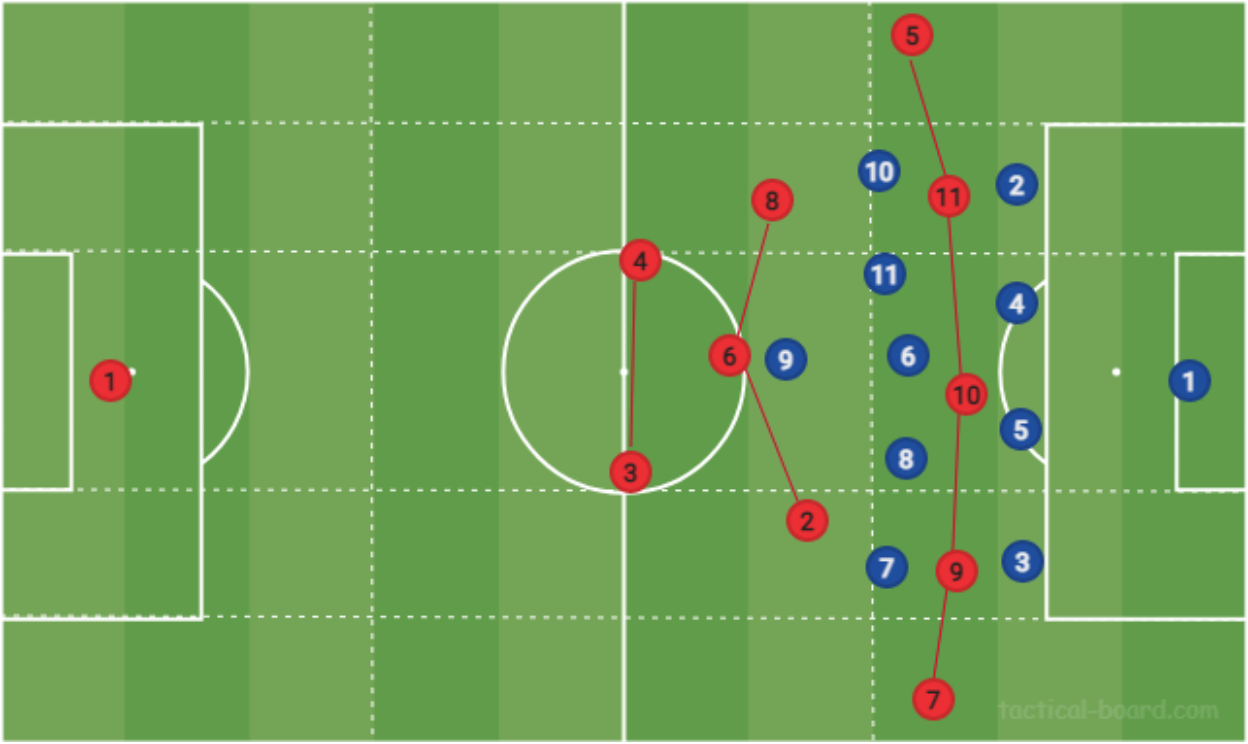 Manchester United would look to progress the ball through the wide areas, often overloading the areas to play down the middle or cross the ball. This overload would also isolate the opposition right back in a potential 1v1 situation that could force him out of possession and exploit him with an underlapping run.

Inside the box when the cross would be played, there would be three attackers present, with one player attacking the near post, dragging the defender with him while the rest remained fluid. They could attack the far post, run into space, or just stay right outside the box for a cutback.

This Manchester United side was undoubtedly Sir Alex Ferguson’s greatest team ever, with the side cementing itself in the history books by winning three consecutive titles and bringing home the 2008 UEFA Champions League trophy, defeating Avram Grant’s Chelsea on penalties in Moscow.

The front three of Cristiano Ronaldo, Wayne Rooney and Carlos Tevez was a nightmare to mark while the midfield of Paul Scholes and Michael Carrick was sublime in their passing and could be relied upon. The back five was the core of the side Sir Alex built his fundamentals upon — in sum, it was Sir Alex’s answer to the critics accusing him of being a second-rate tactician. It was, and forever will be, Sir Alex’s last true great creation.