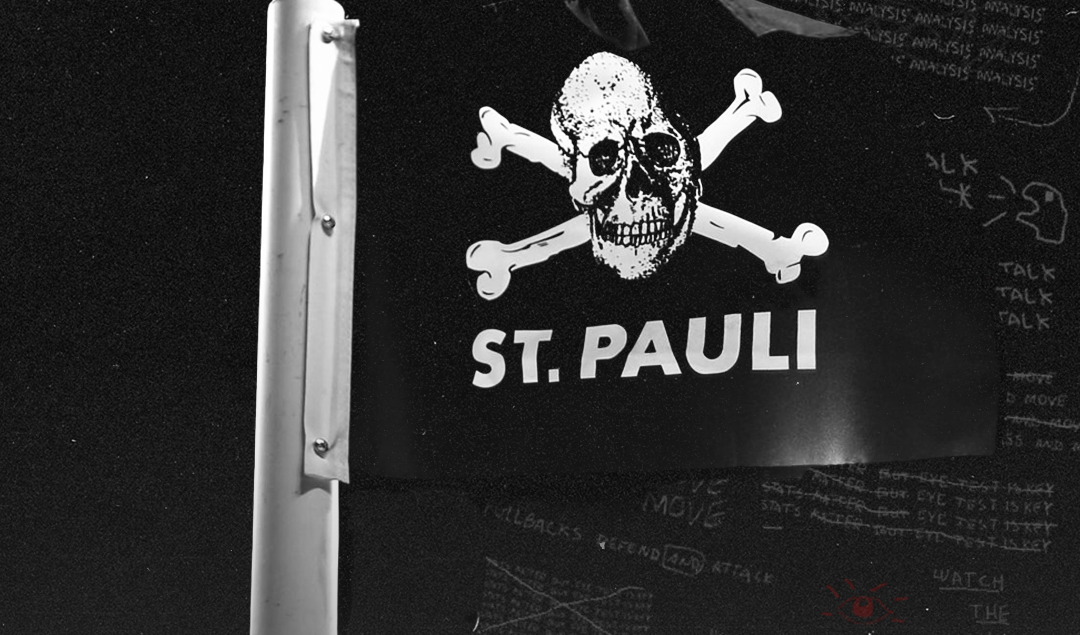 Chronicling the evolution of FC St. Pauli and how they epitomise what many clubs aim for – weaving together culture, politics, and ideals.

Few clubs have taken on such a cult status as FC St. Pauli (FCSP). Synonymous with the image of the skull and crossbones and unashamedly political and diverse, St Pauli have emerged from the depths and shadows of the Hamburg streets to become internationally lauded for the morals of the club.

For most of the city’s history it has enjoyed economic stability and success built from geographical location and the importance of the Port of Hamburg. Being part of merchant and maritime associations, such as the all-powerful Hanseatic League, allowed the city to begin trade with nations from all over the world – trade still very alive today.

The port has helped to increase the population of Hamburg throughout the centuries, as well as rebuild the city following a fatally destructive ‘Great Fire’ in 1842. Hamburg has faced many setbacks through 200 years – Napoleonic rule, the Fire, major cholera outbreak and then the devastation of the Second World War.

All through that time, Hamburg has remained as a ‘free city’, self-ruling, even though a member of the German Confederation from 1815. People rebuilt Hamburg and that’s known amongst the locals – it’s where the pride of being a Hamburger comes from.

Pride is strong among St Pauli fans. Hardly a surprise given how diverse a club they are and how passionately the fans believe in its morals and structure. Diversity has always been present, but it was not until the 1980s that the distinct openness of the club took hold as identity.

Parra and Viñas argue “Another Football is Possible” in new book on FC St. Pauli

Opening in 1963, St Pauli’s home, the Millerntor-Stadion, is located just off Hamburg’s infamous Reeperbahn. In the 1980s the terraces started to become full with the people of this distinctive area. In turn, this general openness and welcoming spirit to the outcast generated a culture where left-thinking social and political issues could arise.

At this time not many other German supporter groups shared their philosophies. A contemporary viewpoint and one that sparked rivalry. Ignorance and violence from opposing fans would be a sporadic theme when the supporters of St Pauli took to the road to follow their team because of these beliefs.

However, many friendships with supporters groups from around the world who share their outlook have blossomed – Glasgow Celtic, Rayo Vallecano and AEK Athens to name a few. Banners in support of Bayern Munich’s supporters group have even been held aloft on the terraces – and vice versa. St Pauli’s anti-fascist, anti-homophobic, anti-racist stance has created an endearment from like-minded football fans.

Attendance figures were low at the turn of the 1980s, however, fast forward 20 years, and near sell-out crowds were a common occurrence. For the 2018/19 season, 16 out of the 17 home fixtures were full to capacity, with many years prior also seeing a plethora of sell-out crowds. A packed out Millerntor has been the norm for such a long time and the fans deserve rewards for their loyalty.

Nearing bankruptcy on several occasions, mixed with a combined eight seasons in the Bundesliga, St Pauli are not exactly a consistently successful team. But still the fans are so devoted to the club and cause. When they found themselves in the regional leagues at the turn of the millennium and in financial hardship, shirts with a slogan of ‘Retter’ (rescuer) along with the crest emblazoned on the front helped keep the club out of liquidation. A friendly against Bayern and other fan initiatives also aided this, and once again, the ethos of the club was so transparent.

Friendlies have been played in Cuba to help out the local people, and during the Syrian Refugee Crisis, migrants were freely welcomed to sleep over on the pitch of the Millerntor. The club constantly welcomes refugees, as shown with numerous banners that adorn the stadium. Once more, demonstrating a club open to all.

Brown and white are uncommon football shirt colours, but then FCSP are hardly common themselves. This is brilliant though, creating a real identity and culture that is so strong and prevalent – something every club wants deep down.

The waving of the pirate flag originated during the 1980s when one fan, who called himself Doc Mabuse, began to wave an enormous flag with an image of a skull and crossbones – symbolising the image of the outcast.

Mabuse squatted in the Hafenstrasse housing area, near the Millerntor, and was part of the new type of fan who turned to support St Pauli and vocalise political and social issues. Squatting rights were part of this, and FCSP fans have demonstrated in favour of these rights whenever there has been controversy on the issue. Speaking up on social issues is second nature – as is helping those less fortunate.

Culture surrounds the Millerntor – whether that’s the vibrant area the ground is located in, the history and importance of the Port of Hamburg, the people who define the spirit of the club, or even the Feldstraße bunker that backs on to the Stadion. Once a Second World War concrete behemoth, the greenery has coloured the structure and allowed for construction to be undertaken to transform the building into a hotel. Overlooking the Millerntor, the bunker, now transformed, adds to the culture of the city.

Returning to on-field matters, the last time a ball was kicked by a St Pauli player in the Bundesliga was the 2010/11 season. Since then, they have remained a constant figure in the second division where they have been joined by city rivals, Hamburger SV (HSV). 2018 was the first time that HSV dropped out of Germany’s top-flight league since their creation in 1919; the longest run in the top league of any club.

However, since entering a period of struggle, St Pauli have stood their ground against their stalwart rivals – now on a five-game unbeaten streak. However, HSV’s history still looms pretty large, given their domestic and international triumphs.

Emerging out of the St Pauli district, the club was founded in 1899 but did not become established until 1910. Regular occupation of the lower leagues meant that when the Bundesliga formed in 1963, and only one team from a city could be a member of the league, HSV were chosen ahead of FCSP.

The Boys in Brown never achieved promotion in this format, although, due to the growth of German football, the 2. Bundesliga was created and St Pauli were founding members. They even won eventual promotion to the Bundesliga for the 1977/78 season. However, instant relegation followed, as did financial woes and they fell down to the third division. Not for long though; FCSP found their feet again and by the late 1980s, with attendances booming, the Bundesliga beckoned once more.

Now the club is an ever-present name in the second tier and can hopefully build upon that and challenge for promotion to become a Bundesliga team. Constant high attendances would not see the club look out of place in the top league. In fact, they achieve more full capacities than numerous Bundesliga teams. The fans deserve rewards. However, the fans will always remain loyal, whatever division St Pauli find themselves in.

Because, as much as the football matters, and it really does, speaking out on social issues is just as paramount. St Pauli are the definition of the ‘People’s Club’.