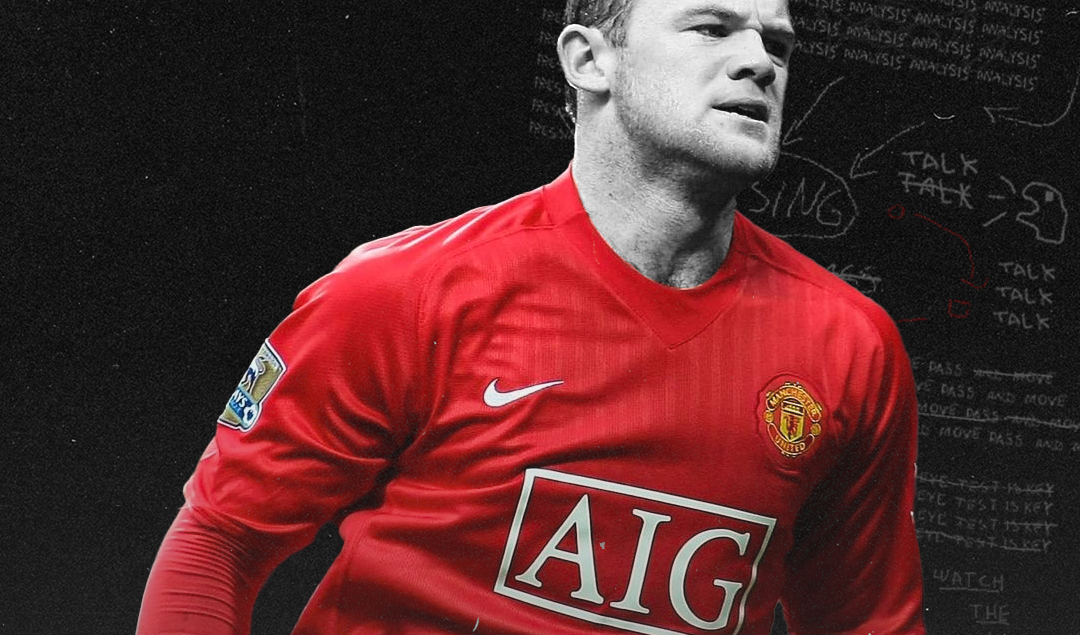 The buzz around Wayne Rooney started well before his debut against Spurs at the start of the 02/03  season. After scoring 8 goals in 8 games on the way to the 2001/02 FA Youth Cup final, Rooney was finally named as an unused sub against Southampton and crucially handed the no.18 Shirt previously worn by one of his idols Paul Gascoigne. By 16 years old, Rooney already had the physical attributes to compete in the men’s game and the technique to go along with it.

His breakthrough came at the start of the next campaign when he started in David Moyes’s 4-4-2 system,  partnering Kevin Campbell. Unlike Campbell, who liked to play on the shoulder of the final defender and was known for his penalty box prowess, Rooney was afforded the luxury to drift into a free-er role making use of his ability to receive the ball between the lines and drive at the defensive line. From his deep positions, he rarely scored tap-ins. Instead, he had a tendency for the spectacular, as evident by his famous long-range winner against Arsenal in 2-1 win.

Rooney was never an out-and-out nine at Everton. His tally of 17 goals in 77 games demonstrates that,  but he was always good enough to perform such a role if required. It was felt that his skills, homed on the streets of north Liverpool were better suited to a second striker, part creator and part goal scorer. In his  second campaign, he often played of Duncan Ferguson, one of his teenage idols, and later behind the  speedy Tomasz Radzinski.

Everton fans never saw the best of Wayne Rooney as he left for Manchester United in ‘04 but it was as an  Everton player where Rooney gave his best performances at an international level. The buildup to the  2004 Euros was dominated by the discussion if England’s optimum system. But Eriksson reverted back to the 4-4-2, meaning that Owen and Rooney formed a strike partnership.

Owen had also played in a similar role to Rooney, playing behind a big no.9 like Emile Heskey but Rooney offered a different option. Rooney took the 9-shirt but played off of Owen as the deeper man. Owen was leading the line but Rooney was surely leading the goal scoring. Rooney scored 4 goals in 4 games, whereas Owen just netted once.

His performances convinced United to make him the most expensive British teenager. His first couple of seasons were relatively low-key, again occupying the position of a second striker, playing deeper with the #8 shirt. Rooney’s issue here was that he was playing with a relatively non-co-operative striker in Ruud Van  Nistelrooy who was the Premier League’s most clinical poacher and United were accustomed to building the attack around him and was used to playing with providers.

However, the arrival of Rooney and Cristiano Ronaldo changed things. They weren’t primarily providers like David Beckham and Ryan Giggs but they were players who wanted to score goals. Wayne wasn’t a great scorer but a scorer of great goals. He often looked better with Van Nistelrooy omitted out of the eleven. Soon RVN was eased out of the club to Real Madrid and soon his role was going to change.

The era of Ronaldo and Rooney dominating United’s attack started after the 2006 FIFA World Cup. Sir Alex Ferguson hadn’t signed an obvious replacement for RVN. United were to play with multiple rotating attackers, surprising the opposition with pace, movement and interplay. However, there is little doubt the Ronaldo was the main man in the team. But it was evident, that Ronaldo decided where to play and the others reacted. This meant Rooney was often found on the wings quite literally.

In big matches, Rooney was handed a wide role in United’s 4-3-3 hybrid formation replicating the job Park Ji Sung was playing on the opposite wing, tracking his opposition full-backs up and down the pitch. Rooney was still a threat but the lack of position 5 years into his United career left him frustrated.

In 2009, Ronaldo departed United for Real Madrid and again Ferguson didn’t sign a direct replacement.  Berbatov had arrived the previous summer and was expected to be made United’s main striker. Antonio Valencia was a more traditional winger than Ronaldo who arrived on the edge of the box to supply crosses. Again, Rooney didn’t have a defined position; sometimes he was deployed as the second striker playing deeper behind Dimitar Berbatov, sometimes playing as a lone striker up front.

The difference here was that the attack was shaped around Rooney who was now a focal point rather than having to play around others. In big games, Ferguson almost exclusively switched to the 4-3-3 with Rooney up front and this is where he started looking like one of Europe’s best.

There were two distinct qualities that came to light when he was starting up front. One of which was that Rooney was starting to look like a proper no.9, generally scoring from Valencia’s crosses from inside the box. And the other was him being able to operate as a false nine, a position that was re-popularized by Lionel Messi.

The Evolution of the False 9 Role

When combined the two roles together he seemed unstoppable and ended the campaign with 26 Premier league goals. Although Rooney did not always start alone up front, it seemed like his best role — a shadow striker behind the no.9.

He had a rocky start to the 10/11 season, mainly due to his ankle injuries and the public declaration that he wanted to leave. He was still partnered up with Berbatov who both and positional fluidity allowing both strikers to interchange the no.9 and the no.10 role but during this time Ferguson often played a  new system.

A 4-4-1-1 that could look like a 4-2-3-1 like his previous 4-4-2s but with different roles. He was often played behind Javier Hernández, a pacey one-dimensional striker poacher. Rooney was now playing a more defined no.10 role’ charged with playing through balls for the Mexican forward, but his legs were slowing down and contributed less defensively.

The pros and cons of him in this position were shown in the 2011 UEFA Champions League Final. Although he was an attacking threat as he scored a goal, his failure to track back meant United were always overrun in midfield. These problems continued into the next season; he was great in attack but he wasn’t contributing defensively.

Sir Alex Ferguson based his decision-making around this and looked to a way to fit him into the eleven without sacrifices defensive solidity which meant he was seen dropped for Danny Welbeck who more energetic in tracking back.

But Rooney remained a threat as a no.10, and with the arrival of Robin van Persie from Arsenal, the two formed a deadly duo with Wazza operating as a deep-lying forward and leading the Red Devils to their 20th league title in 2012/13. The following summer saw him attract interest from Chelsea, and while he ended up staying at Old Trafford and eventually signing a new contract, he was unable to prevent them from suffering a painful post-SAF hangover.

Following the departure of Nemanja Vidić to Inter Milan, Rooney was handed the captain’s armband by new manager Louis van Gaal and impressed in a deeper role, winning the club’s Player of the Month award for the month of December. Despite often playing as a midfielder, Rooney finished as the club’s top scorer with 14 goals and became the first player to score over 10 goals in 11 successive seasons.

Wazza kicked off the 2015/16 season with a hat-trick against Club Brugge, his first treble in European competition since 2004, and in January, he surpassed Thierry Henry’s record for most goals for a Premier League club. Despite suffering with a knee injury, Rooney returned to full fitness at the end of the season and led United to victory against Alan Pardew’s Crystal Palace in the 2004 FA Cup Final, playing the full 120 in central midfield.

The 2016/17 season saw Rooney rack up a multitude of accolades under José Mourinho, surpassing Bobby Charlton as United’s all-time leading goalscorer, becoming the third Premier League player to register 100 assists, and scoring the final goal at White Hart Lane. He left for Everton with the impression that he could’ve extended his prime had it not been for his constant injuries, but with the status of one of the greatest players of his generation and in Premier League history.