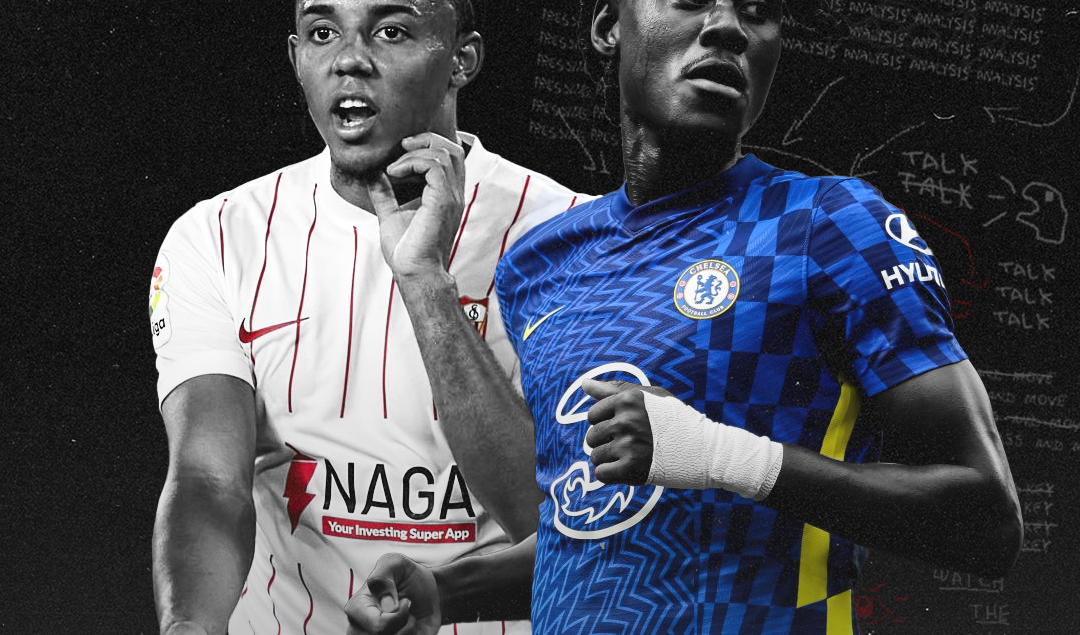 Chelsea have been linked with a move for French centre back, Jules Koundé as a part of Thomas Tuchel’s efforts to strengthen the defence. However, the recent exploits of academy graduate, Trevoh Chalobah has reduced the thirst for further defensive reinforcements.  Chalobah had previously been linked with a move away from Stamford Bridge this summer but his performances have been too impressive to overlook.

This is why many believe they can only have one of either Trevoh Chalobah or Jules Koundé. Opting to sign Koundé would most likely result in Chalobah getting loaned out and sticking with Chalobah should signify an end to the pursuit of Koundé. It wouldn’t make much sense to have both as part of the squad especially since they’re so similar.

Trevoh Chalobah and Jules Koundé are both natural right-footed centre backs who can play as a right-back and a defensive midfielder. Tuchel reportedly wanted Koundé to fill in the right centre back role in a three-man defence, the same position Chalobah has played and excelled in so far. Both players fit the modern centre back tag as they are comfortable in possession and can easily progress the ball either by passing or driving out of defence and into the midfield area.

Their stats from last season weren’t far apart as well; Chalobah played in Ligue 1 with Lorient and Koundé in La Liga for Sevilla. Chalobah completed 38 dribbles with a 73% success rate while Koundé had 30 successful dribbles, 75% of his total attempts for the season according to Fotmob.

Chalobah had a slight edge in tackles with a 57% success rate compared to Kounde’s 55% as well as both defenders level on blocked shots, three each. They are both 22 years old, they both play the same position and have proven competent so far in two of the top five European leagues. So why do Chelsea need Kounde when they already have Chalobah?

Why Chalobah Has the Edge over Koundé

The answer is they don’t and the truth is opting to go for Koundé who Sevilla reportedly value as high as £70 million would be nothing more than a power trip for Chelsea, a statement signing. Trevoh Chalobah ticks all the boxes, he’s homegrown and Cobham royalty, following in the footsteps of his elder brother, Nathaniel who also came through the Chelsea ranks and made some first-team appearances before joining Watford on a permanent deal.

Trevoh’s stunning Premier League goal against Crystal Palace put him in the Chelsea history books as he became the second-youngest debutant to score in the club’s history. The emotional connection aside, we have already established that Chalobah is actually good enough to play for Chelsea, so this is not some biased opinion.

It isn’t an anti-Koundé agenda either, he’s proven himself as a quality player, a regular for Sevilla and a part of France’s Euro 2020 squad.  Despite that impressive CV and potential at 22 years old, opting for Chalobah wouldn’t be a downgrade.

Yes, Jules Koundé has more clout right now and can be rightly considered the better player but Chalobah isn’t far behind either and needs the confidence of Thomas Tuchel to unleash his full potential. Chalobah also has the height advantage at 1.90 metres which has been the one downside to Koundé’s game, considered too small at 1.78 metres for a centre back. The bottom line is, Chelsea already has all they need in a right-sided centre back in Trevoh Chalobah, there is no need for Jules Koundé anymore.