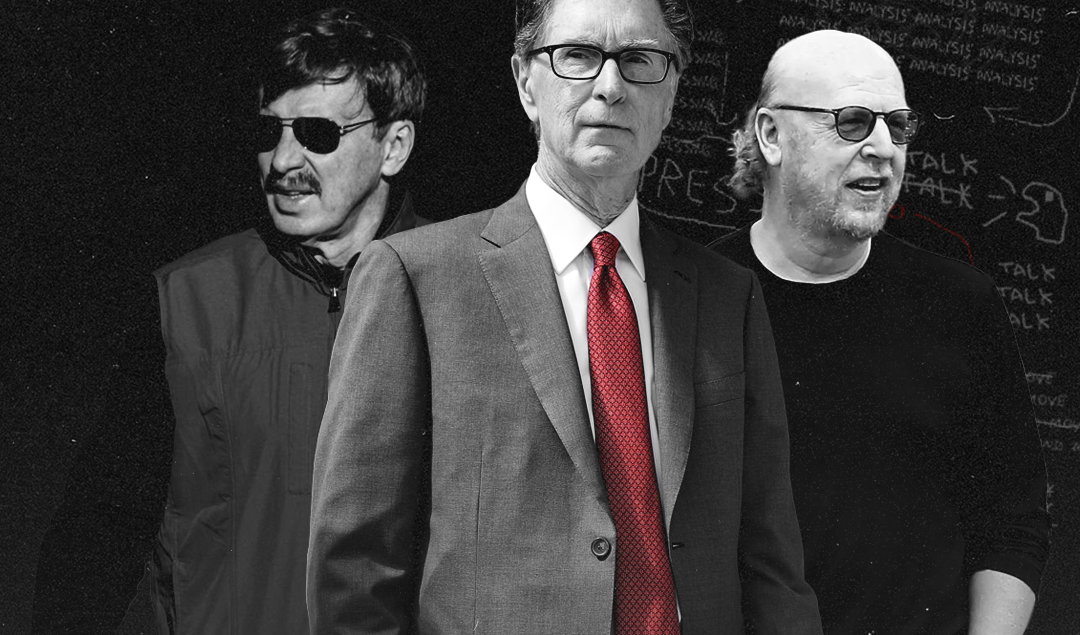 Following Arsenal’s 1-1 draw with relegation-battling Fulham last Sunday, a few murmurs were heard about a possible new European Super League being signed off imminently. Later that day, the Gunners (and the other clubs involved) confirmed that such a scenario was indeed true.

For many years now various football organisations have made decisions that leave fans angry and yet we adapt. This is the world in which the beautiful game now exists. Let’s take a trip down memory lane to see how it is possible for just one or two people to challenge the status quo, why it is not necessarily a bad thing and the reasons why these events occur.

In the late 1800s, Arthur Kinnaird and Fergus Suter were the trailblazers in the modernisation of the game we’ve grown to love. The latter was a Scottish stonemason who played for Darwen, one of the few successful working-class teams in existence. The former was educated at Eton College, an establishment that was one of the pioneers of the English game which, at the time, had strong links to the upper classes. Kinnaird would go on to play for Old Etonians.

At a time when many Etonians were against the modernisation of football and claimed that it should be a strictly amateur sport, Suter challenged this point of view. The Glaswegian became a controversial figure in the game after moving from Darwen to Blackburn Rovers and getting paid. Although illegal at the time, this move would change the sport forever. (Check out ‘The English Game’ on Netflix for a cinematic explanation of this.)

Suter would go on to hold the record for FA Cup victories, having won three in a row with Blackburn Rovers from 1884 to 1886, a record that would be broken by Ashley Cole, who achieved 7 FA Cup trophies with Arsenal and Chelsea. Throughout the years, there would be plenty more attempts to rewrite football and attempt a European Super League. There was even an attempt to create a Super League in the mid 1950s, with clubs such as Anderlecht and Rangers being invited, but instead, the European Cup was established in 1955.

The vast majority of football fans would agree that the current Real Madrid president Florentino Pérez is not one of the sport’s most popular characters. When the news of the nascent Super League broke, it was his name that was front and centre. In fairness to him, he showed his cojones by being at the forefront of everything and taking the bullets fired at him and others.

Nevertheless, the main culprit in this Super League movement is someone that lurks in the shadows, and man who goes by the name of Charlie Stillitano aka ‘Champagne Charlie’. While Andrea Agnelli, Pérez and the Glazers have grabbed the headlines, Stillitano is a man who should also be in the spotlight.

He belongs to no club or league but is the well-connected chairman of football events and media company Relevant Sports Group. His greatest achievement is to help make the USA a key commercial hub of European football. Remember the Manchester United vs Real Madrid match in 2014? He brokered that – a match watched by more than 109,000 fans in the stadium, a record attendance for a football match staged in North America.

Stillitano was one of the more prominent figures when ‘US soccer’ emerged in the early ‘90s. It has been claimed that he was present at the formation of the Super League alliance circa 2015 in which he sent out missives to the executives of Real Madrid with a blueprint of what this pioneering pan-European league should look like.

At the time of this move, Stillitano and his associates assessed the powers of UEFA and FIFA, but little did they know that fans and players would fight to prevent this pact from happening. Some 48 hours after the initial declaration of intent, eight out of the 12 founding teams had pulled out. Below are two screenshots about how it all started from Der Spiegel’s article on November 2, 2018. 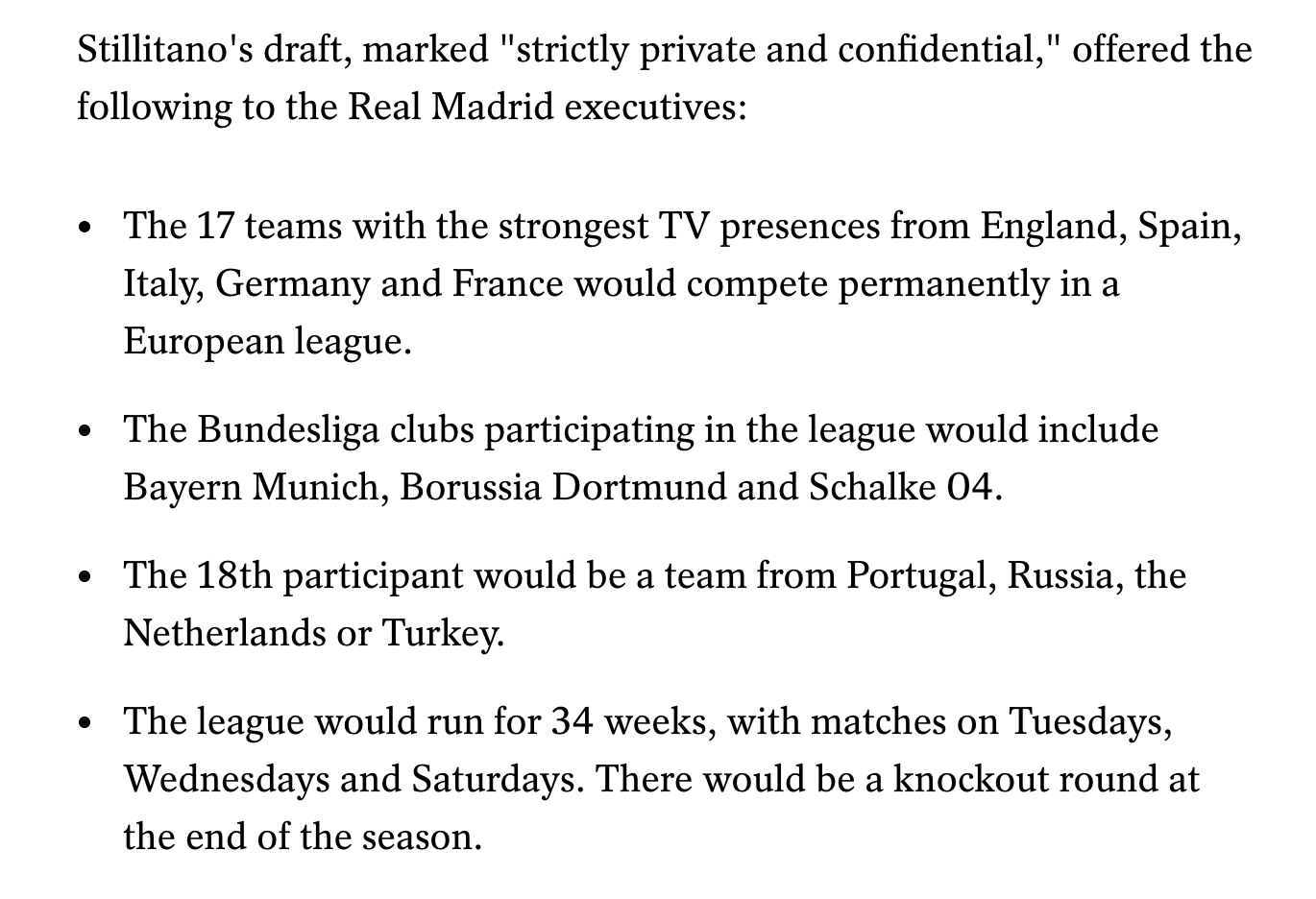 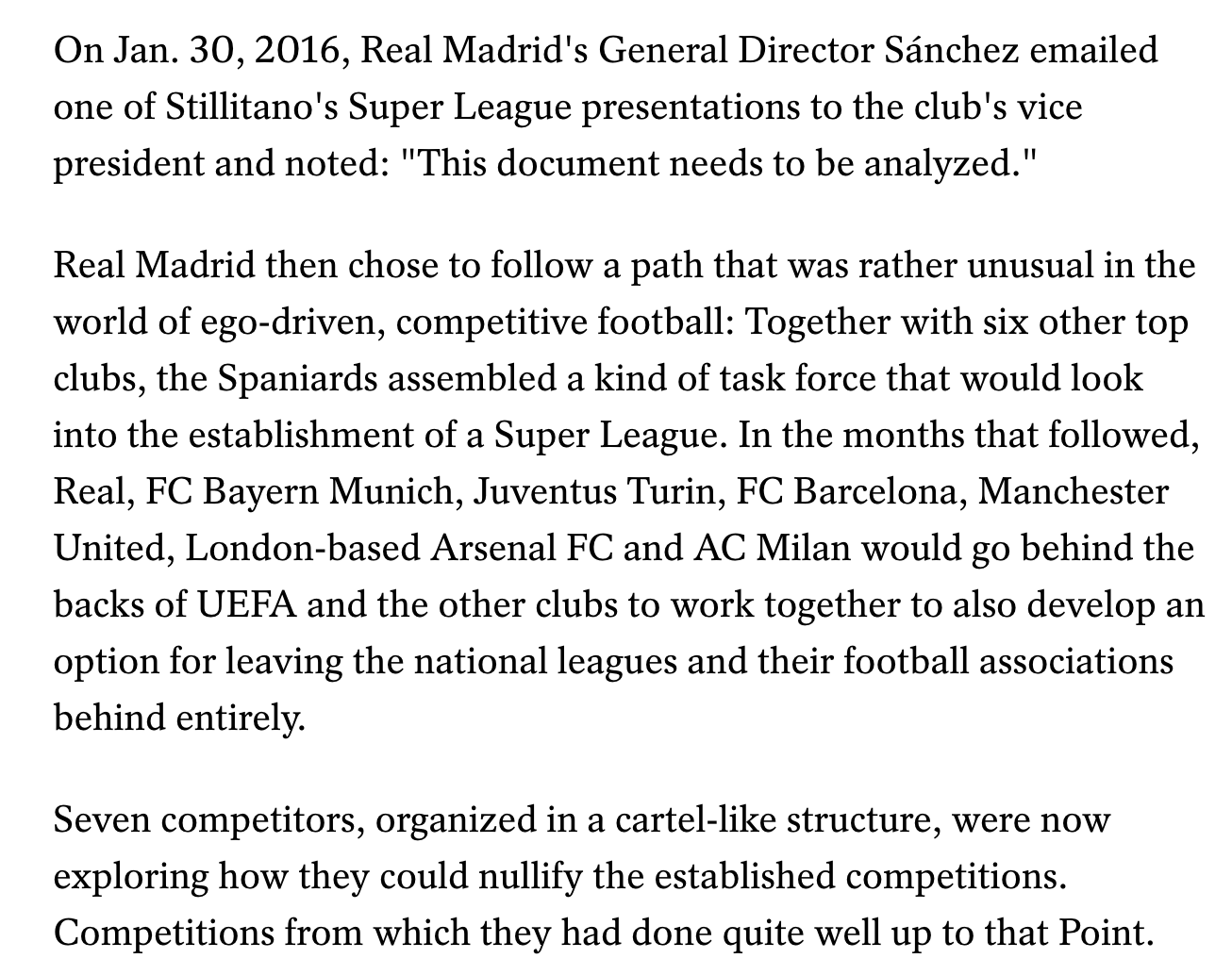 Pérez loved the idea from the start. How do you think Real Madrid became Galácticos if they didn’t have a slice of every pie? He wanted it all, so this idea was fantastic to him and all he had to do was assemble a team of money-hungry execs from other leading clubs, which wasn’t too difficult. The plan was to make European football similar to American sports.

My first thought was that this was going to end up like the NBA, ie a consumer good where we wait for the big boys to play. It would have made for a great spectacle. Eventually, there would have been a draft system and maybe a format similar to how the play-offs are staged. “First you get the money, then you get the power, then you get the woman”– Scarface.

If you’ve ever watched Scarface, then you’ll know how it ended for Tony Montana. The Super League has died in a similar fashion, and despite Pérez’s claims that his mission was philanthropic rather than greedy, the sheer evil behind the plan has been exposed and laid bare.

“All I do is for the good of football. The Super League is not for the rich, but it’s to save football. If the current system continues, football will disappear and by 2024 we would be already dead. The game has been losing interest from fans, we need a change. Sixteen- to 24-year-olds don’t have interest in football. Football needs to adapt to the new generation, now.

There is some truth to what he is saying in terms of FIFA, UEFA and now the Super League being all the same and basing whatever they do on personal gain. Having been challenged by the Super League, UEFA stated they could offer a similar amount of finance. But why weren’t issues such as racism and the deaths of workers involved in the construction of stadiums for next year’s FIFA World Cup given the same degree of focus?

The stats below show the estimated income losses of each of the 20 football clubs in the Premier League at the end of last season. From the figures, one can deduce why the Super League would have been so appealing to the ‘big six’ clubs. Meanwhile, La Liga suffered cumulative losses of its own due to coronavirus. Its calculated potential losses could come to €500 million for broadcasting rights in the top division — again this provides sufficient evidence as to why its three biggest clubs wouldn’t have found it hard to be sold dreams of a breakaway league.

Switching to Serie A, with Agnelli’s boys running a monopoly and the league not generating enough to compete, one can conclude that they were in dire need of the money on offer from the Super League. Inter have accumulated a crushing amount of debt under the Suning ownership, whilst Milan have also felt the financial weight of the pandemic and would benefit tremendously from the reported revenue that a Super League would bring.

The Men Behind the Premier League ‘Rebels’

One thing you can count on when it comes to American businessmen is that if you put them in a house containing money, they will sniff it out. For the Glazers, the Super League was no different. In 1995 Malcolm Glazer acquired the Tampa Bay Buccaneers for $192 million and today they are worth $1 billion. They have effectively turned both teams into a money-printing machine.

In addition to the north London club, Stan Kroenke also owns the Los Angeles Rams and Denver Nuggets. After acquiring the Rams, he moved them to LA and built the SoFi Stadium for a cost in excess of $5 billion in the belief that the region would reward him financially.

Joe Lewis (ENIC Group) is a veteran forex trader. In the early ‘90s he teamed up with George Soros to bet against the pound on ‘Black Wednesday’ and has a personal art collection worth over a billion dollars.

John Henry, another veteran trader, bought the Boston Red Sox in 2002 and delivered the World Series in 2004, ending an 86-year title drought. The team is now worth over a billion dollars.

Roman Abramovich is no stranger to spending money, however, covid has hit his personal fortune hard, reducing his net worth by £2.4 billion. He was no doubt tempted by the Super League as it was the quickest and fastest way to balance the books after being promised an annual £350 million infrastructure stipend.

United’s ‘noisy neighbours’. With 10 clubs under City’s football umbrella, it’s a clear message that they’re thirsty for an empire, one that Sheikh Mansour can control. Despite their differences, one thing all of these owners have in common is that they know how to make money and love power. The Super League was a no-brainer for them.

The Importance of Broadcast Deals

One reason why the Super League died such a prompt death was because of the lack of Paris Saint-Germain and Bayern Munich. In addition to other clubs such as Sevilla, Borussia Dortmund and Ajax, who rejected the invitation, PSG and Bayern’s absence from the competition deprived the breakaway league of last year’s Champions League finalists and winners, and in effect, it meant it was destined to fail from the start.

The Parisians are owned by Qatari billionaires, who – with the World Cup coming up – won’t want to dent their relationship with FIFA.  Additionally, it should not be forgotten that they are also prominent figures in BeIN Sports, which has a significant stake in the Champions League TV rights.

Bayern Munich are about to be crowned Bundesliga champions for the ninth consecutive year. Although the Bundesliga is fan-centric, we should be aware of the monopoly Bayern have. With Agnelli stepping down from the ECA, Bayern Munich CEO Karl-Heinz Rummenigge has taken his place.

Without players such as Robert Lewandowski, Neymar, Kylian Mbappé and Erling Haaland, the Super League would have struggled to attract potential broadcasters and gain a substantial television rights deal. It is therefore unsurprising that, in the absence of these star players, the Super League failed to hold water over a long-term period. 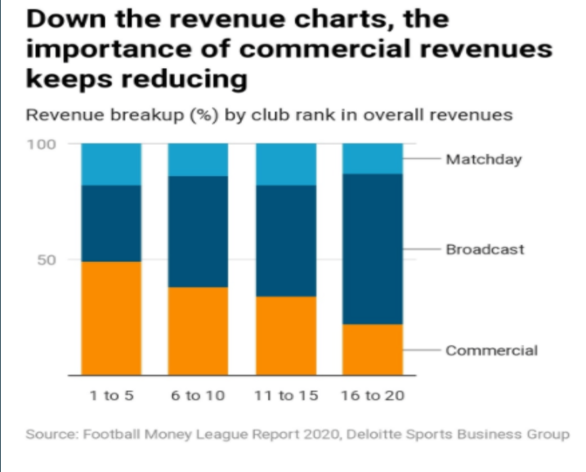 We can see above how much of a percentage broadcasting money takes up for the majority of football clubs’ revenues. The basis for the Super League centered on gaining more viewers and television broadcasting rights money due to more “attractive fixtures,” and while the project has failed, the new 36-team UEFA Champions League format has the potential to enact the same goals that the Super League set forth.

The threat of a Super League has subsided for now, but fans must remain vigilant and ensure that European football competitions are not corrupted further by nefarious reforms and cash-hungry breakaway competitions.