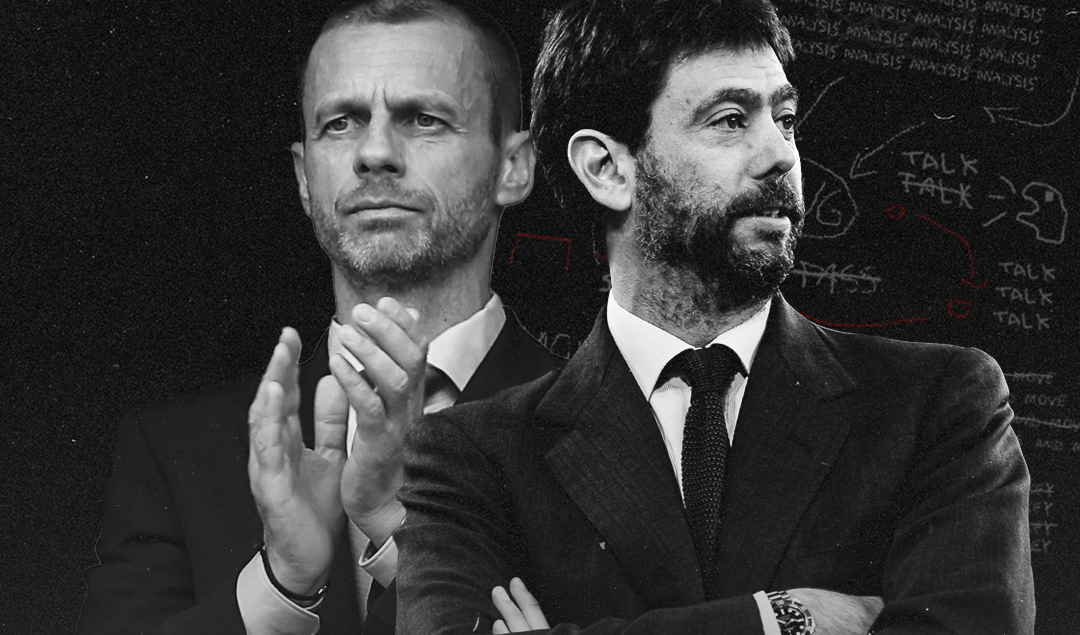 Normally after a good old helping of football over the weekend, I like to digest games and decipher what has caught my eye.  It was almost impossible however to avoid the decadent predicament that all who love the game faced in a breathtaking 72 hours from the announcement on Sunday at midnight, to what now looks like the attempted coup of a breakaway European Superleague quickly being dispelled like a forgetful first date.

I forget there was actual football played this past weekend, firmly put on the back burner, since the astonishing announcement made by the ‘leading’ 12 clubs of Europe, that pulled the trigger on the announcement they have been flirting with for years that they intend to make their own ‘Super League’ amidst the alluring swathes of financial gain they could be set to make. It shook the game to its core, making headline news around the world.

We know the culprits by now, six English clubs (Manchester United, Manchester City, Liverpool, Arsenal, Spurs, Chelsea) three Spanish clubs (Barcelona, Real Madrid, Atlético Madrid) and three Italian clubs (Juventus, AC Milan, Inter Milan) intended to make their own more self-serving (as if they didn’t have the biggest slice of the pie already) version of the Champions League, where there would be no relegation and founding members would automatically compete in the league every year.

The reasons for their downright money-grubbing, now comical, attempt at a breakaway league was their delusional answer to how to deal with the effects of the pandemic as clubs had lost match day revenue operating without fans, not just on match days but other revenue streams, like stadium tours and hospitality. The clubs were set to split an eye-watering 3.2 billion pounds and in the midst of a pandemic where clubs are struggling to stay afloat in the lower leagues around Europe the move from the clubs was and is abhorrent.

The ripple effect for the rest of the teams in the participating leagues would be huge on the football pyramid as it would mean less money for the teams below them in each league throwing them into uncertainty as to how to operate for incoming seasons. I am using words like was and were because at the time of writing this, clubs are now swiftly rushing to backtrack and are pulling the plug, the mutiny has been startlingly accelerating, the cowardly rich are in no mood to stay in the kitchen with the pressure cranked right up and they are dropping like flies.

I think we all need a breather. I have never stared or typed on my phone so vehemently for such a sustained period. In a whirlwind 2 days since the announcement, the outpouring and uproar has been cataclysmic and justifiably so, from Downing Street to the Late Late show, managers, players, celebrities, politicians, pundits and fans united together to air their absolute disdain and disgust for the shameful power grab the billionaire ‘dirty dozen’ attempted. It has worked.

In a quick turnaround since the announcement on Sunday, the concept has imploded and disbanded. The level of outrage united football fans, and all this soon looks like it will be a forgotten nightmare with the executives and chiefs in charge left to hang their heads in shame and their tail between their legs, it is a small victory for the fans who have been starved of going to see their clubs for a year dealing with a pandemic. The small man stuck it to the big, bad men who had the audacity to believe they could throw the game we love so dearly into disarray.

The move to make the European Super League was overwhelmingly rapacious, taking into account owners who were the leading brigade like The Glazers, John Henry at FSG aimed for more wealth because they see it as their right, it was simply sheer greed. The fact that fans particularly in the United Kingdom stood up to it the way they did is encouraging.

Not to mention players and managers who were completely out of the loop and blindsided by the ambush, managers like Pep Guardiola and Jürgen Klopp went against their club, players like Jordan Henderson and Luke Shaw released statements in spite of it possibly being detrimental to their careers. The move betrayed the trust of staff and players but also could throw the work they have done this season into jeopardy with possible point deductions.

It was Andrea Agnelli, Juventus and ECA chairman and leading flag bearer for the ESL who in a piece by Mark Doyle on Goal back in March 2020 was labelled the most dangerous man in football. The smoke from the incoming fire should’ve been smelt a while ago, this was coming. Agnelli spoke openly about teams like Atalanta without a history breaking through and it being incorrect. Which pinpoints one of the many fundamental flaws of the ESL, increasing disparity and decreasing competition allowing easy money to increase the owner’s avaricious intent.

The reason we love this game with such fervour is because of the unpredictability, the competition. Teams like Leicester can win the league making the impossible happen, and it is never a foregone conclusion when a big team goes to play a smaller club, because in football anything can happen, that is exactly what we are protecting here.

Football is all about those nervous few days before games, the hope and anxiety of what could be ‘You think we have a chance?’ ‘I think if we play so and so on the left we could do damage.’ The fact that this was attempted to be ripped away from us left us all seething. Agnelli was the European Club Association chairman and essentially stabbed all the clubs he was meant to be looking out for in the back. The man who felt most betrayed was UEFA boss Aleksander Čeferin who Agnelli assured over phone calls prior to the announcement the plans for the league were just rumors.

Imagining a World without a Transfer Window

What does surprise me about Agnelli and the Super League concept, is that Agnelli as James Horncastle mentioned in The Athletic, has been around Juventus since his 20’s, he was honed for the role from a young age like Sonny Corleone to be the next The Godfather. He directed Juventus through the Calcipoli scandal then back to the top of Serie A, he is aware of the power of supporter’s voices and he has directed a club dealing with fans for a decade, he is the most in tune of all involved in the ESL breakaway bid.

Owners and key executives at the rest of the clubs like Florentino Pérez at Real Madrid and Paul Singer of Elliot Management group at AC Milan simply saw a monetary increase as did Agnelli, Agnelli does and should know better and now he is having his ‘Sonny Corleone shot at the segway’ moment. The sheer Game of Thrones-esque conniving manner the announcement was delivered is a microcosm of the entire concept, attempting to cloak the nastiness at midnight on Sunday when the world slept.

It feels as though the idea for the league was half-baked and senseless, merely a covetous attempt of maximising ginormous profit. If they had been planning this for months as reported, what kind of disjointed planning had they been doing? There was no thought-out plan of gaining broadcasters or plans in place and because of the negative reaction worldwide, it was always going to be difficult to find one.

As Sir Alex Ferguson said once ‘TV is king’. It is startling the level of dissonance the people involved at the top could see how this would fly with everyone, the wide chasm shows how out of touch they really are. Though it is a victory of some sort, it sheds necessary light on something many journalists have been saying for the last few years, that the game was heading for sheer opulence and elitism, this is just confounding it on a grander scale.

UEFA and FIFA are not the good guys here, they were mainly in uproar because their pockets were going to be hurt and disrupted. UEFA and the Premier League in particular, have done nothing to stop the inception of these questionable ownerships, the reason we are at this point now is that the owners are unregulated and allowed to drain big English clubs of money and essentially use them as an ATM.  The owners in charge currently bought the clubs for their own sole gain, as an investment to better their portfolio or enhance their reputation, they simply throw their weight around like spoilt kids because nobody tells them what to do.

It was ironic watching Čeferin and FIFA exec Gianni Infantino wax lyrical about ‘greed’ feigning integrity as if their associations are exemplary beacons. FIFA are rotten to the core and UEFA were on the verge of passing a beta European Super League in the Champions League reforms. In a Reuters interview in August 2020, Čeferin said he was ‘relaxed’ about state ownership coming to more clubs because financial regulations would be ‘observed’ I think the actual meaning of Čeferin’s words were they would be ‘relaxed’.

More money in more clubs means more money for Čeferin and their gluttonous associations. This could be a watershed moment for football to continue the fury and feed off the indignation, just because UEFA have been more discreet with how they have made the game ‘money money money’ doesn’t mean they should be spared, football should keep going to enhance the game because the ESL is a problem that occurs when you give such powerful men miles when you should give them inches.

Gary Neville and Jamie Carragher valiantly led the aggressive backlash on Monday Night Football speaking eloquently and with fire even mentioning other rival broadcasters issuing a cry that we must all come together. But the point must be made, they were speaking on a TV conglomerate that took away the ease of watching the Champions League on free-to-air TV. The 16-24 market chiefs spoke about aiming to that had lost interest in football have been robbed of watching the Champions League for free because Sky threw money at it.

It was intriguing to read that the Abu Dhabi United Group who have a 78% ownership at Man City joined the ESL at risk of missing out, money for them and Roman Abramovich has never been the issue as opposed to the more tightly ran English clubs who prioritise revenue, as Abramovich and the Abu Dhabi group have run the clubs to enhance their image, no less Abramovich who became rich off of concise moves from a soviet war.

A poetic comparison can be made with the GameStop stock revelation earlier this year when regular everyday Reddit stock traders profited from the volatile market sticking it to the rich stockbrokers, utilising common ground, banding together for better. It was liberating watching the Chelsea-Brighton game seeing fans outside Stamford Bride chanting and singing in protest, it reminded us of what is important; the game is about the fans.

Football must continue to improve and use this as an awakening to further the game against the corruption of the associations, for now, in a remarkably short period, those who adore the game have stood up to stick a finger to the billionaires who thought it was fine to rip the game’s heart out.