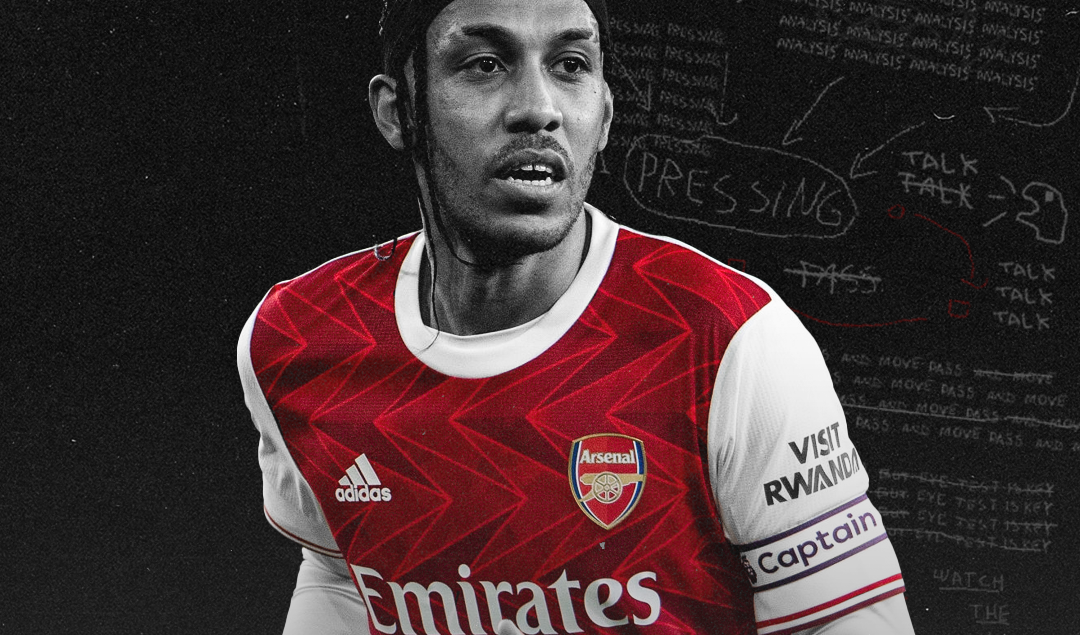 On the 15th of September 2020, fans who clicked onto Arsenal’s Instagram live page were greeted by a Black Panther helmet, a sand timer, the flag of Gabon, a captain’s armband and a contract. To any non-football fan, this assortment of objects would be strange, to say the least, but for Arsenal fans worldwide, it symbolised the imminent confirmation for the extension of their talisman. The contract would go on to be signed detailing the three-year extension of Pierre-Emerick Aubameyang.

A total of 111,000 people tuned into the novel event, a testament to one of the hottest transfer stories that summer. They would continue to watch as Aubameyang walked onto the Emirates pitch and was joined by an ecstatic Ian Wright. The Gabonese striker talked with wonderous eyes about his dreams of becoming an Arsenal legend donning that heavy number 14. And as London’s summer sun spilled onto the pitch, he signed off with great optimism and an infectious smile, having just “signed da ting”, little would he have known how the next six months would play out.

Just eight Premier League matches remain until the end of the season. Arsenal sit in tenth, nine points off fourth-place Chelsea and 32 points off league-leaders Manchester City. Aubameyang has scored 14 goals in all competitions (9 in the league) and managed just one assist, marking one of his lowest ever goalscoring seasons. Not only has he struggled on the pitch, but in one of Arsenal’s biggest games of the season against North London rivals, Tottenham, Aubameyang was relegated to the bench for “disciplinary reasons”.

As things stand, Arsenal look well on their way to a sixth successive season with no Champions League appearances. But with a last chance to qualify through the Europa League, Aubameyang is needed now more than ever to suit up and help rescue Arsenal from a dire situation, but why have his performances dropped so dramatically?

What Has Gone Wrong for Aubameyang?

By using actual goals minus expected goals (G-XG), we can determine whether a player is overperforming or underperforming. For those unfamiliar with expected goals, let’s take a look at Opta’s definition.

“Expected Goals (XG) measures the quality of a shot based on several variables such as assist type, shot angle and distance from goal, whether it was a headed shot and whether it was defined as a big chance. Adding up a player or team’s expected goals can give us an indication of how many goals a player or team should have scored on average, given the shots they have taken.”

Firstly, Aubameyang’s 2019/20 season was sublime. Overperforming his expected goal tally by 6.3 goals. The 31-year-old punished teams with the slightest chances that came his way finishing the season with 29 goals (31% of all Arsenal goals). But what was most impressive is that he achieved this tally in a season of significant transition, playing under three managers, each with different playing styles and philosophies. Still, he remained the constant in scoring goals.

Expectations of Aubameyang have subsequently risen. Fans anticipate the captain to score with every chance that falls to him. But in this season, Aubameyang has been a shadow of his former self. Rather than the killer instinct usually exhibited, Aubameyang has looked unsure in front of goal, often over-complicating chances and making uncharacteristic mistakes for a seasoned striker. The data shows it too, with an underperformance of -0.8, scoring 14, not bad, but hardly the heights he was hitting last season.

There could be numerous reasons for his underperformance, ranging from the manager to the player himself. Maybe a lack of pre-season resulting in less cohesion amongst the squad? Or perhaps fatigue has finally caught up from a sharp turnaround between seasons? The following zooms in on two key potential explanations focused on a more structural approach: position and personnel.

Arteta has played Aubameyang in all of the front three attacking positions this season, with a majority of minutes accumulated at left-wing. The position is not unfamiliar to Aubameyang, who played there in the early stages of his Dortmund career to accommodate Robert Lewandowski, a situation similar to Arsenal with Alexandre Lacazette usually the focal point in the team.

Wing players must have close control, be strong on the ball, and create chances for themselves. Examples such as Sadio Mané and Raheem Sterling are two of the best in the world for these very reasons. In comparison this season, Aubameyang has been poor for these very reasons.  If given the time and space, Aubameyang can be lethal, cutting in to find that all-important angle to shoot where Fulham, Leeds and Burnley have all been punished.

However, if a team presses onto Aubameyang or decides to double-team him, he struggles to maintain possession. He has the worst successful dribble percentage of all Arsenal wingers (43.3%) despite having the second most attempts behind Pépé, highlighting his struggles on the ball. Aubameyang also finds it difficult to create shots averaging 1.74 shot-creating actions per game, versus Bukayo Saka, who averages almost double with 3.43 shot-creating actions per game.

Rather than being played on the wings, Aubameyang is at his best centrally as a striker. At Dortmund after Lewandowski’s transfer to Bayern Munich, Aubameyang moved to striker and quickly became one of the world’s most potent goal scorers. His first season in the position saw him score 25 goals, then 36 goals the following year and then 40 goals in his final entire season at Dortmund, becoming the Bundesliga’s top scorer.

Aubameyang is a lethal striker because of his movement in the box and his ability to time runs behind the defence, causing chaos for defenders. He is also effective at leading the press, closing down defenders to force mistakes and if given the split-second chance, he can punish to devastating effect. Whilst Aubameyang may not offer the same hold-up play as Lacazette, his movement and goal sense are better as he has outscored the Frenchman every year since he arrived at Arsenal.

Are Alexandre Lacazette and Roberto Firmino Really Underperforming ? A Comparison With the Other No 9’s in the Premier League

This season under Arteta, Aubameyang has played striker 15 times with varying degrees of success. At his best, he has managed to score his first Premier League hat-trick against Leeds, but there have also been games in which he has missed glaring opportunities. But this shouldn’t come as a surprise. In the 2018/19 season, Aubameyang led the league in big chances missed with 23 in the following season, he missed ten big chances. Not because of improved conversion rate but because of a sharp drop in chances created.

This is only exacerbated when he is played on the wing with the expectation to create chances, help in the build-up play, and get into positions to score. At his best, he is a pure finisher with a wicked sharp eye for goal but playing him at left-wing has limited the positions he can get into, making it difficult to maintain the overperformance of goals from last season.

The heart of chance-creation comes from the personnel within a squad, and Arsenal’s had little to start the season. Having failed to secure the signing of chief target Houssem Aouar and no backup in place, the Gunners headed into the season with no recognised attacking midfielder. Mesut Özil was continually left out of the squad for “footballing reasons”, and Emile Smith Rowe was still recovering from injury.

Consequently, when Arteta decided to switch to the 4-2-3-1 formation following the first international break, he had to use Joe Willock or Lacazette in the attacking midfielder role. Both players failed to thrive in the position lacking the close control or creativity to unlock defences. Arsenal paid the price as they were unable to win in their next five games against Leeds, Wolves, Tottenham, Burnley and Southampton. While the results weren’t solely lost on the choice of number 10, the attacking influence was limited as the Gunners averaged 1.02 expected goals over the five games.

It wasn’t until Emile Smith Rowe was brought into the starting line-up that results and Aubameyang’s form turned for the better. Immediately there was a difference as attacking transitions became more fluid and forwards were more involved. Smith Rowe brought poise, matureness to the midfield, and most importantly, a creative link to Arsenal’s attackers.

Aubameyang was then able to get into more goalscoring positions and receive more chances rather than having to try drop deep to receive the ball. The loan signing of Martin Ødegaard has also added creativity and progression to the midfield which will only help the Gabonese striker going forward. Still, the lack of appropriate signings in the summer was a big hit to the number of chances that Arsenal were able to create early on in the season and will have affected the number of opportunities Aubameyang would have had to score.

Without the correct personnel around him, Aubameyang can quickly become a passenger for the side with his lack of effective hold-up play to involve his teammates and struggles in creating chances for himself. But now, with Smith Rowe, Ødegaard as creative midfielders and Saka and Gabriel Martinelli on the wings, Aubameyang should receive more high-quality chances to score, which have been lacking this season.

The environment has certainly not helped with poor transfer business and an inexperienced manager at the helm, but the growing pains should have been expected. Aubameyang himself also has to hold accountability as Arsenal’s captain for some of his ominous performances this season, particularly against the “traditional top 6”, where he has scored one goal (a penalty) in seven games. The games in which teams look to their captain for inspiration.

Nevertheless, it is far from over. If Arsenal are to succeed in their ambitions of Champions League football, they will need Aubameyang to rediscover his extraordinary form. Moreover, if Pierre-Emerick Aubameyang wants to live up to his words about becoming an Arsenal legend, his first step should be to lead this Arsenal side to a Europa League trophy.

Data courtesy of Fbref.com and Transfermarkt.com