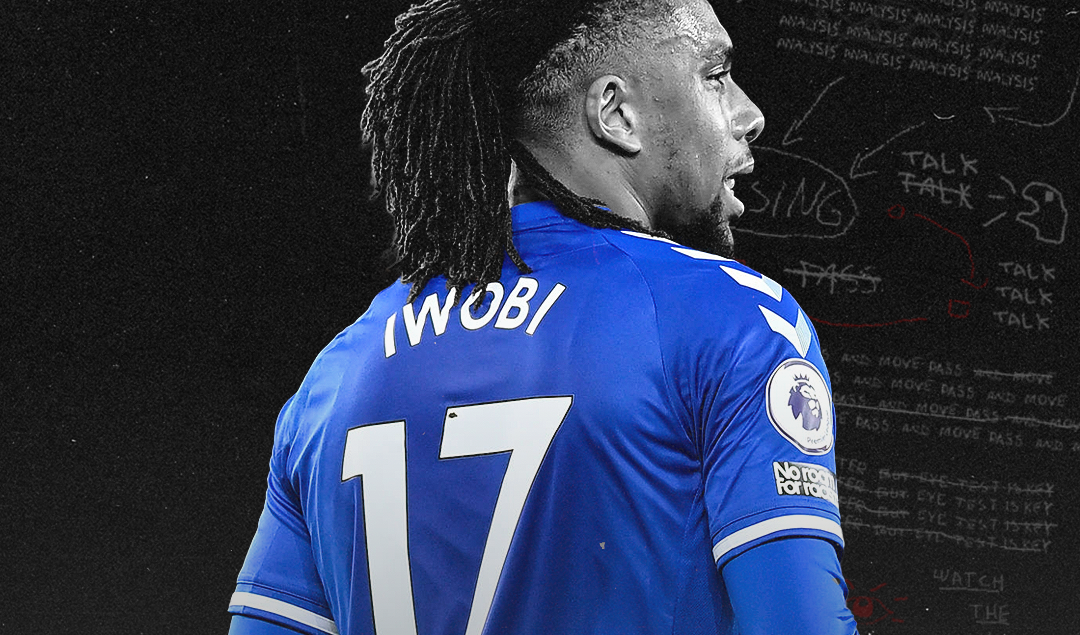 When Alex Iwobi broke into the scene as a youngster for Arsenal in 2015, everyone saw him as a world-beater in the making. There was this raw talent about him, he had the flair of some of the most aesthetically pleasing footballers the world has ever seen and as a nephew to Nigerian footballing icon and legend Austin ‘Jay Jay’ Okocha, Iwobi wasn’t just destined to be a great footballer — he had it flowing through his veins and his performances as a youngster at the time made this visible.

Fast forward to seven years later, Alex Iwobi is a key player for English Premier League side Everton and has established himself as a mainstay in the Nigerian national team but for a player who was a golden boy nominee and was named CAF youth player of the year in 2016, more was expected of him at this stage of his career.

Iwobi was able to hold his own as an exciting young player at Arsenal, playing an important role under Arsene Wenger who handed him a first-team opportunity and then Unai Emery under whom the Nigerian played his last Arsenal game and scored his last Arsenal goal before he was sold to Everton in the summer of 2019.  There’s no gainsaying that Alex Iwobi had a quite underwhelming first two seasons at Everton as he struggled to live up to the hype and expectations following a big money move that reportedly cost Everton £35million.

At that point, it seemed as though another top talented youngster will fail to live up to expectations and managerial changes at Everton did not help matters as the Toffees went from Marco Silva to Duncan Ferguson to Carlo Ancelotti to Rafa Benitez and now Frank Lampard, and it is under the tutelage of the latter that Iwobi now seems to be finding his feet and his best form. The 26-year-old had his brilliant moments under Ancelotti but the consistency was lacking, more so, he had to adapt to playing in different unfamiliar positions including wing-back.

However, with him finding form in central midfield for Everton this season, Super Eagles coach Jose Peseiro will be more certain of the position to play him in as seen in Nigeria’s most recent international friendlies. And credit must be given to Frank Lampard for helping the midfielder find his best form in his best position.

‘’I felt and always saw he’d be dangerous in the middle area of the pitch. It probably helped I was a midfield player and I understood some of the things he had I wouldn’t want to go up against, and I felt they were restricted on the wing. Opening the pitch up more centrally was a big help for [Iwobi] and then the rest is him,’’ said Lampard.

Iwobi’s performances this season have been suggestive of a player who is about to hit the peak of his powers. Certainly, he’s not there yet but if he continues like this, he is very likely to explode in the next one or two years, little wonder Everton are already discussing tying the Nigerian to a new contract. He has no doubt established himself as a key cog in the engine of Frank Lampard’s system and with the regular game time he’s getting now, his destiny is definitely in his hands.

It is also worth noting that Alex Iwobi is very pleasant to watch with creativity being one of his major strengths, and having played in deeper positions on the pitch over the past couple of seasons, the Nigerian could as well add work rate to his CV. In terms of creativity which is one of the major metrics used in judging attacking midfielders, Iwobi has held his own amongst some of the Premier Leagues elite creators so far this season.

Statistically, he’s outperformed the likes of Martin Odegaard and Bruno Fernandes in terms of creativity with five assists and 21 chances created while also completing 387 passes out of 476 attempted passes, maintaining a passing accuracy of 81.3% against Odegaard and Bruno’s 80.74% and 77.88% respectively. Matter-of-factly, only Kevin De Bruyne has provided more premier league assists (nine) this season than Iwobi’s five, and the Nigerian even boasts of a higher passing accuracy than the Belgian’s 80%.

Ruben Loftus-Cheek – What Does the Future Hold for a Player in Between a Rebirth and a Significant Decline?

Iwobi’s recent form and performances have delighted his fans and even his uncle, ex-Bolton midfielder Austin ‘Jay Jay’ Okocha who was present at Goodison Park when he scored the opening goal in Everton’s 2-1 loss to Manchester United a few weeks back didn’t hide his admiration for the midfielder.

”It’s great to see him playing to his potential,” Okocha said after the game, as quoted by Everton Live. “We all knew that he’s got something special, but it’s taken him a little while to settle down and I also think playing under a great manager, who really wants to improve his game and has been playing him in his right position has made a big difference. I think Everton are enjoying the best of Alex now and we’re all delighted that he’s playing well.”

Everton fans in particular are definitely enjoying this renaissance and they will be hoping it continues and the player also plays for the club for a much longer time. Overall, it’s an exciting team that Frank Lampard is building at Everton with the likes of Alex Iwobi, Demarai Gray, Anthony Gordon, Dominic Calvert-Lewin and Dwight McNeil all playing well in recent games and safe for injuries and lack of consistency, they are set to do amazing things in the Premier League.

Moreover, with Iwobi having just less than two years left on his Everton contract, the club will be hoping to tie him down to a new contract and prevent him from becoming the latest big name to depart Goodison Park after Romelu Lukaku, Ross Barkley and Richarlison as they look to build a genuine long-term project under Lampard.