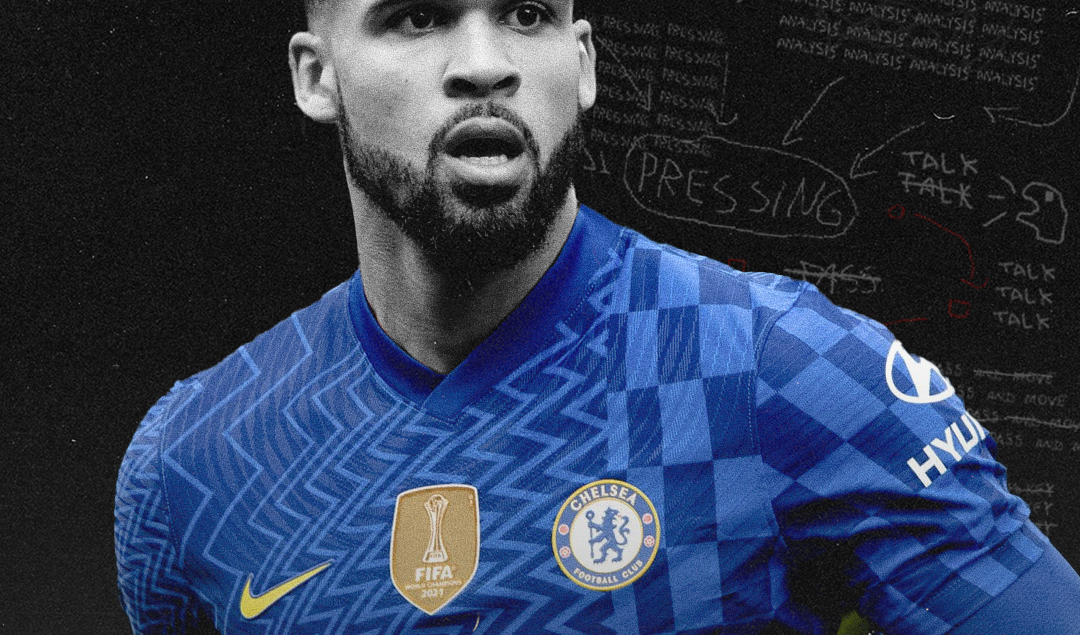 When Ruben Loftus-Cheek began to emerge under Jose Mourinho in Chelsea’s 2014/15 Premier League-winning season, everyone thought that he was a world-beater in the making. His performances caught the eye and the potential was there for everyone to see. About seven years down the line, Loftus-Cheek is part of the Chelsea first team but he’s not the star player everyone thought he would be.

After a fruitful loan spell at Crystal Palace in the 2017/18 season where he racked up 25 appearances in all competitions, the Chelsea academy graduate looked more than ready to become a key member of the first-team squad and his performances for the Eagles at that time had impressed England boss Gareth Southgate, hence he was handed his first England call-up and subsequently, he was part of the Three Lions squad that represented England in the 2018 World Cup in Russia.

The 2018/19 season remains Loftus-Cheek’s best season in Chelsea colours and arguably the best season of his career so far. The then 22-year-old had established himself as an important member of Maurizio Sarri’s squad in the Blues’ run to a top-four finish and a Europa League triumph.

Playing on either side of a three-man midfield in a 4-3-3 formation, the Englishman was exciting to watch and it was almost impossible to stop him when on full flow, he was literally a handful for opposing defences and when played on the left behind Eden Hazard, it was all poise and swagger, and the right-hand side of every defence at that time dreaded the heat of their combo.

The midfielder went on to make 40 appearances in all competitions for Chelsea that season, scoring 10 goals and providing 5 assists and everyone who paid attention knew he could only get better the following season but a ruptured Achilles in a friendly match against New England Revolution back in May 2019 was the beginning of what now looks like an end to the meteoric rise of one of the most exciting English talents of the last decade.

Loftus-Cheek was out of action for close to a year and it’s been a slow return to full strength for the 26-year-old who ‘had to learn how to walk again’ en route to his full recovery from injury. The midfielder returned to the Chelsea first-team squad post-covid-19 lockdown in 2020 and played in the first few games that followed the lockdown but he was clearly off the pace and his long-term future at club at that time looked to be fading away.

Frank Lampard tried to ease him in by deploying him in a more attacking role than he played under Sarri but he just couldn’t nail a spot ahead of players like Christian Pulisic, Willian, and Pedro Rodriguez in the team. Matter-of-factly, he didn’t look good enough to play for Chelsea and it was very clear that he needed more time to regain the form that made fans and pundits call him a ‘Rolls Royce midfielder.’

A loan spell at newly-promoted Fulham the following season looked ideal and the midfielder showed flashes of brilliance for Scott Parker’s side but there was still a reoccurring problem for him during his one-year loan spell at the club.

Both Parker and Lampard saw Loftus-Cheek as a more attack-minded player than he really is and they both tried to play him as a forward, probably forgetting or ignoring the fact that the Cobham graduate played his best football as a central midfielder under Maurizio Sarri in 2018/19.

The loan spell at Fulham didn’t propell a career rejuvenation and Chelsea would have either sold or loaned out Loftus-Cheek had they gotten the opportunity to do so last summer.

The right offer never came for the midfielder and he had to head into the 2021/22 season as a member of the Chelsea squad with very slim hopes of getting enough playing time as the Blues had just taken another midfielder Saul Niguez on loan from Atletico Madrid on transfer deadline day.

The Thomas Tuchel Discussion – Is He the Right Man for The Chelsea Project?

Loftus-Cheek was able to force himself into the thinking of Thomas Tuchel though as he at least rose above a struggling Saúl in the pecking order of midfielders and with both N’Golo Kanté and Mateo Kovacic spending months and weeks on the sidelines, the English midfielder did get many chances to impress.

He made his first league appearance of the 2021/22 season when he came off the bench for Jorginho to play the last 14 minutes of Chelsea’s one-nil loss to Man City at Stamford Bridge in September and there is no gainsaying that he had an effect on the game.

His physicality and pure dribbling abilities make him a press resistant and this helped Thomas Tuchel’s side gain some control in midfield and push the team upfield to create some openings against a Man City side that had dominated the game prior to the midfielder’s introduction.

The 26-year-old had scaled through his 14 minutes audition and with both N’golo Kanté and Mateo Kovacic injured for large parts of the first half of the season, he went on to feature in 11 straight premier league games. A few times alongside Kovacic in a midfield pivot and more often alongside Jorginho.

While Loftus-Cheek was getting minutes in the premier league, he was also getting minutes in Europe as well. After substitute appearances in  two of the first three UEFA Champions League games, the midfielder was handed a start against Malmö at Stamford Bridge in what was one of his best Chelsea performances and Man Utd legend and BT Sports pundit Rio Ferdinand had this to say about him:  “ I love him, at his best and full flow, he reminds me of Yaya Toure “

The Yaya Toure comparison is one I completely agree with. The way Loftus-Cheek carries the ball from deep into the opposition half, bamboozling his way through opponents and rolling over defenders when on full flow gives you flashbacks of the Ivorian legend. The talent is there and there is also the potential, the only thing lacking is the consistency, the Chelsea midfielder consistently turning heads at the highest level.

It is worth pointing out that Ruben Loftus-Cheek is a player probably lacking in confidence and self belief after his previous injury woes and he might just need an extra push to get back to his best footballing abilities again and manager Thomas Tuchel has rightly encouraged him to do that:

“He needs to understand how much potential he has and unleash this physical capacity on the daily. In training he cannot let loose. He needs to be under pressure and play every game like a cup final.” Tuchel said after Loftus-Cheek scored his first goal of the season in a 2-0 FA Cup semi-final win over Crystal Palace in April.

“He needs to discover this monster in him and unleash this on a regular basis because it is absolutely necessary. It is not enough to be just on the pitch.”

In finding consistency and building his confidence, Thomas Tuchel needs to help the 26-year-old, that is if he is not sold or loaned out this summer. The question has continued to linger about whether Ruben Loftus-Cheek fits into Thomas Tuchel’s system.

The Englishman is more of a central midfielder and playing in a midfield pivot in a 3-4-3 system requires a lot of defensive responsibility which is not one of Loftus-Cheek’s biggest strengths and this has shown in some of Chelsea’s games where Loftus-Cheek had to play alongside a fellow ball carrier like Mateo Kovacic.

When not played alongside a sitter and organiser like Jorginho, the Blues are always caught napping and left porous in possession turnovers and transitions, something that was highlighted in their 2-2 draw against Wolves at Stamford Bridge last month.

For Loftus-Cheek to excel as Yaya Toure did in a pivot, apart from that ability to make marauding runs into the opposition half, he needs discipline, he needs to be tactically aware of his surroundings and Thomas Tuchel can help him do this if he is willing to put in the work.

The German tactician has also played Loftus-Cheek in other positions apart from midfield. He played marvelously well as a centre-back in the fifth round of the FA Cup against Luton and also played at right wing-back in a tactical move by Thomas Tuchel to deal with the threat of Vinicius Jr in the UCL quarter-final second leg against Real Madrid.

If there is one thing Thomas Tuchel has helped Ruben Loftus-Cheek improve on, it is his versatility. Though the midfielder is not the ideal defensive-minded player yet, he is still a work in progress and there are chances he could rejuvenate his career by remodeling into a top defensive midfielder.

Rio Ferdinand on Loftus-Cheek: “He should be like Yaya (Toure). He’s a top-tier player. You know, I’ve seen him play in defence this season and he looked super comfortable. The manager is starting to trust him and you’re starting to see a different Ruben Loftus-Cheek now.”

Ruben Loftus-Cheek would most likely be among the players put up for sale this summer as Thomas Tuchel seeks a squad rebuild under the new ownership of Todd Boehly but in my opinion it would be ideal to keep him for at least one more season.

Even though he might not get enough first-team opportunities, his versatility makes a case for him as a utility squad player. In Loftus-Cheek you have a player with undoubted ability who can play as a DM, CM, wing-back and an attacker.

There are not many players in the Chelsea squad who boast of such versatility and with one full season under his belt as part of the Chelsea first-team squad post-Achilles injury, the signs look good for Loftus-Cheek in terms of improvement and redemption.

As seen from his days at Fulham, a move elsewhere might not be the solution at this point, he seems to have started a rebirth process under Thomas Tuchel at Chelsea and it’s only ideal for him to see it out because aborting the process by moving to another club might just backfire and put him at the risk of a massive decline and an ultimate failure in fulfilling his potential.