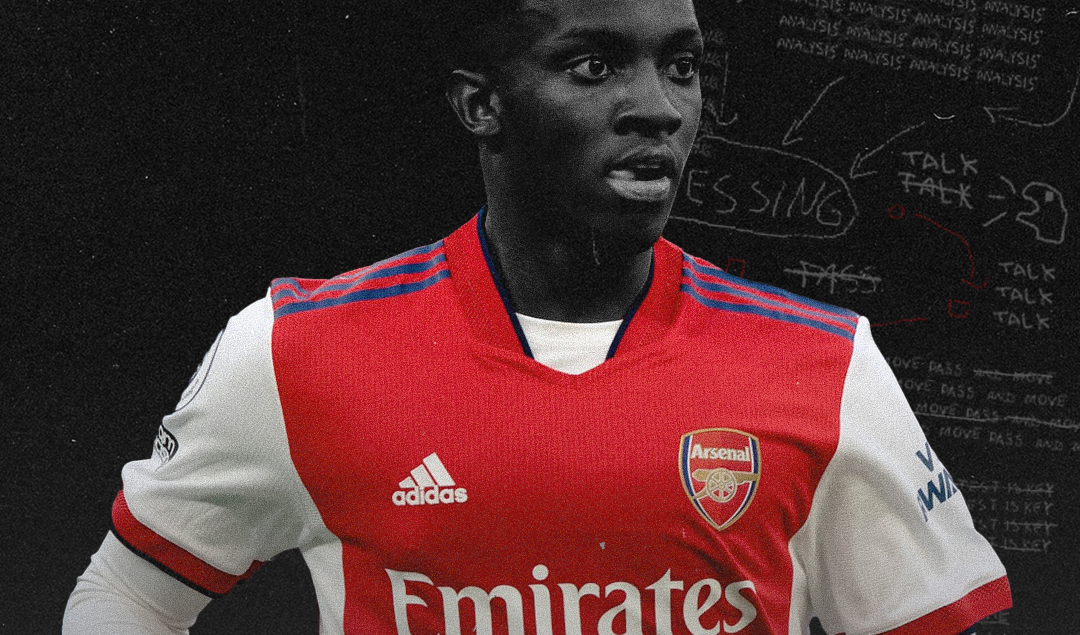 “A lot of people think it only took me 15 seconds to score for Arsenal, but I’ve been working on it my whole life.”

Throughout his entire career, Eddie Nketiah has been the underdog that keeps trying to prove people wrong. Being released by Chelsea in 2015 after seven years at Cobham, due to the feeling that he was not tall enough, he joined Arsenal at 16. Ironically, it was the game at Stamford Bridge in April that truly ignited the Eddie Nketiah revival when his brace proved the difference between the London rivals.

With a large portion of the fanbase unconvinced by the Lewisham-born forward, Nketiah’s future had been cloudy throughout the season. Frustrated with his lack of minutes having only been given a real chance in cup competitions, Nketiah was reluctant to extend his stay at the Emirates Stadium, despite his manager Mikel Arteta publicly expressing his desire to keep him.

However, after finally being given a consistent run of games in the Premier League, as a result of a dismal run of form by Alexandre Lacazette, Nketiah proved that his manager should’ve called upon him a lot sooner.

After Narrowly Missing Out on Top Four, Where Do Mikel Arteta’s Arsenal Go From Here?

Finishing the season with 5 goals in 8 starts and hitting double figures in all competitions, the 23-year-old proved the doubters wrong. After finally being convinced to stay, he has signed a new long-term contract and has even been rewarded with the iconic #14 shirt, highlighting the faith the club has in him.

It goes without saying that Nketiah has massive boots to fill wearing the same shirt number that club legend Thierry Henry broke numerous records with. Theo Walcott and Pierre-Emerick Aubameyang also enjoyed great spells with the coveted number, so it certainly holds a lot of weight. It just goes to show that the youngster is certainly not short on confidence and has a real opportunity now to solidify himself as an important player for The Gunners.

Admitting that he’s been unfair on Eddie, it’s clear Arteta highly rates the striker. At the start of last season, he backed Nketiah with full belief to become “a top, top player” and consistently stated he wanted him to stay at the club. After his performances in the latter phase of the season, it’s clear to see why.

Nketiah’s introduction into the team coincided with a turn of form for the Gunners as they pushed for a top four finish. His work rate in terms of pressing and ability to run the channels and behind the last line gives his side a different dimension compared to when Lacazette played. The pace and power that he possesses enable him to be a focal point as well as being able to hold off opponents and link play.

He is a crafty finisher and plays with a creative flair too, demonstrated by some of the sensational flicks and finishes he produces – his hattrick against Sunderland back in December comes to mind. He has a wonderful ability to remain balanced by manipulating his body whilst directing the ball into the corner of the goal or into the path of a teammate.

These physical and mental attributes alone make him such an asset, but he’s nimble to turn and beat players too on top of this, as well as excelling at combination play.

He has shown glimpses of being able to strike through the ball on each foot, but this is probably the area he should look to improve most. His confidence and self-belief are through the roof and so if he develops a clean shot, combined with the aforementioned attributes, he can become a ruthless centre forward.

Everything points to him having a very good season this upcoming campaign. The improvements he’s made over the last 12 months are astronomical. Whilst he always been an able finisher and a good presser, his first touch, link-up play and confidence carrying the ball have come a long way.

If he continues to develop and brings all these attributes together, he can become a genuine complete forward. Even despite his relatively short height (5 ft 11) he is good in the air, and that’s been evident since his senior debut in the League Cup vs Norwich back in 2017.

Ultimately, whichever striker Arsenal recruit this summer, be it Gabriel Jesus or Victor Osimhen, won’t have a simple task keeping Nketiah out of the side. Jesus is a top striker who will undoubtedly raise the level of this Arsenal team, but Nketiah has so much untapped potential that he could become the main man in this team.

At 23, he is one of the best technical centre forward prospects in Europe so it’s no wonder Arteta was desperate to keep him at the club. There’s a reason he’s England U21s record goalscorer.

Despite his success on the international stage at U21 level, Nketiah is set to switch his allegiance to Ghana, where it looks likely he’ll be the main striker at the World Cup. Captained by Arsenal teammate Thomas Partey, Ghana could have quite the exciting side come Qatar, with Callum Hudson-Odoi and Tariq Lamptey also reported to be looking to make the same switch.

Overall, Eddie Nketiah has all the tools to become a real star at Arsenal. He can be a top class outlet in transition as well as a top penalty box striker. He is an intense athlete and has the confidence to become the main man at Arsenal, possessing bags of technical talent. In the meantime, Nketiah will be determined to continue what he does best – proving people wrong.