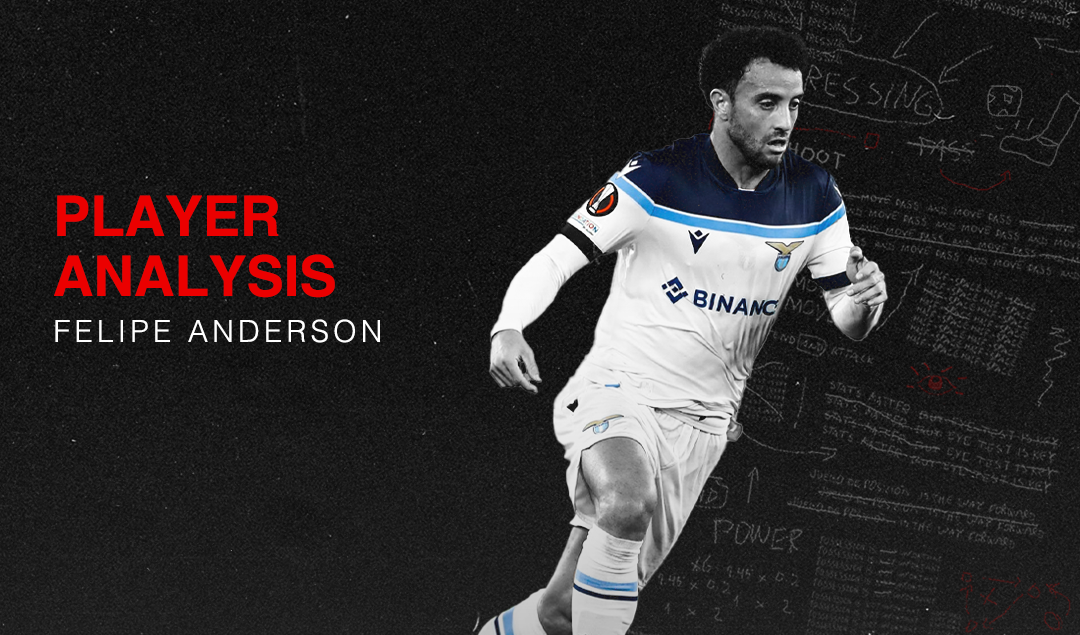 Felipe Anderson undoubtedly played his best football in a European league when he played for Italian club Lazio in the mid-2010s. The Brazilian midfielder spent five seasons with the Serie A team before English club West Ham United purchased him for £36 million in the summer of 2018. After three seasons away from the Italian capital, Felipe Anderson returned to Lazio and the Aquile paid the Hammers a reported fee of €3 million for him.

Under the guidance of new Biancocelesti coach Maurizio Sarri, the Brazilian has rediscovered his form and become an important source of creativity for the Italian side, scoring three goals and providing two assists so far in the 2021/22 Serie A season.

Perhaps the rejoining Lazio was what Felipe Anderson needed after a disappointing time in London with West Ham and a brief loan spell with Portuguese giant FC Porto. Not limited to being a bit-part player, the 28-year-old has already become one of the key men in Sarri’s team.

Lazio is arguably a second home for the Brazilian after first joining from Santos in 2013. The Aquile had purchased him for €7.8 million in a complicated deal which saw the Brazilian club receive 50 percent of the transfer fee and the other half went to investment company Doyen Sports.

He had played in 110 competitive matches for Santos in three-and-a-half seasons, but his playing time throughout the 2013/14 campaign for Lazio was limited, featuring in just 20 competitive games. He was ignored by Aquile coach Vladimir Petković for most of the time, but he started to earn more opportunities under Petković’s replacement Edoardo Reja.

Things changed for the better in the 2014/15 season when Lazio appointed Stefano Pioli as coach. The Aquile went on to finish third on the Serie A table, and they also reached the Coppa Italia Final, losing 2-1 to Juventus in extra time.

Pioli made Felipe Anderson a regular starter in his team and the Brazilian showed that he could play on either wing in the 4-3-3 formation. In his second season with the Biancocelesti, he played 32 Serie A matches, scored a career-high 10 goals, and supplied eight assists. He also played five times in the Coppa Italia, finding the back of the net once and providing two assists.

The 2015/16 season was a disappointment for Lazio, who fell into the Europa League after failing the qualify from their Champions League qualifier against German club Bayer Leverkusen, and it finished eighth in Serie A.  Pioli was also sacked in April 2016 and was replaced by former Primavera coach Simone Inzaghi. It was still a decent season for Felipe Anderson individually, scoring seven goals and providing four assists in 35 Serie A matches.

In the summer, Felipe Anderson went on to represent Brazil at the 2016 Olympics in Rio de Janeiro. He played in four out of six games in the football tournament and featured for 50 minutes in the final as the Brazilians went on to win gold for the first time in history after a penalty shoot-out.

After featuring in that historical triumph for his country, he returned to Lazio and the club had endured a minor coaching fiasco. Argentinian tactician Marcelo Bielsa was hired in July but walked out after no more than five days due to disagreements on the transfer decisions.

Inzaghi stepped in once again but this time he became a permanent appointment. Lazio developed into an exciting counter-attacking team, and he used a variety of formations, also prioritizing a back four. The Aquile finished fifth in Serie A, and they also reached another Coppa Italia Final, losing 2-0 to Juventus.

Felipe Anderson demonstrated that he could play on either wing and also as an attacking midfielder. He only scored four goals in Serie A but the Brazilian went on to register a career high of 10 assists in 36 league games. He was left on the bench for the 2017 Supercoppa Italiana Final, which Lazio won 3-2 against Juventus, but he would also miss out on the first 15 matches of the 2017/18 Serie A campaign due to an abductor muscle injury.

When he did return to the team, Inzaghi had changed the formation to the 3-5-2 formation, which has become synonymous with the tactician’s time at the club. Felipe Anderson did not fit into the new system and he played 21 times during the Serie A campaign.

His performances in the Europa League were more impressive, scoring three times and supplying three assists in seven games as Lazio went on to reach the quarter-finals, losing 6-5 on aggregate to Austrian side RB Salzburg despite winning the first leg 4-2.

At the end of the 2017/18 season, Felipe Anderson left Lazio for a new adventure at West Ham United under Chilean coach Manuel Pellegrini. Pellegrini had won a Premier League title with Manchester City but he could not replicate the same magic with the Hammers.

West Ham finished equal ninth with Leicester City at the end of the 2018/19 campaign, but Felipe Anderson had a decent first season in the Premier League, playing 36 games, scoring nine goals, and providing four assists. After earning his first senior cap for Brazil in 2015, he had earned his second one in a 1-1 draw against Panama in March 2019.

After that, came a decline in form for the Brazilian. He had scored 10 goals in competitive games in 2018/19 but he would only score two more for the Hammers. He appeared 25 times in the Premier League in 2019/20 but he had to deal with a number of injuries. Manuel Pellegrini was sacked in December 2019 and David Moyes replaced him as manager, which also had an impact on Felipe Anderson’s performances.

The Brazilian spent the 2020/21 campaign on loan at FC Porto but his time in Portugal was certainly a time to forget. He played just 10 times in competitive games and five of those appearances were in the Portuguese league.

Felipe Anderson needed something in his career to change while Lazio replaced Inzaghi as coach with Sarri. For the attacking philosophy of Sarri, a player of Anderson’s characteristics was an ideal fit and the Brazilian decided to return to Rome in the summer.

The Biancocelesti are eighth in Serie A with 14 points but the Italian league has been at its most open for years so they should still be expected to fight for a spot in one of the European competitions and Felipe Anderson has produced some fine performances.

His impact was immediate, providing a cross for Sergej Milinković-Savić for Lazio’s first goal in its 3-1 victory away to Empoli in the opening round, and then scoring in the Aquile’s 6-1 rout against Spezia, controlling Pepe Reina’s kick with an audacious flick and turn.

Felipe Anderson also starred in the first edition of the Derby della Capitale for the 2021/22 Serie A season, scoring a goal and providing an assist in the 3-2 win against Roma. His third goal of the season came in another big game, a 3-1 comeback victory against reigning league champions Inter.

A 4-1 thrashing by Hellas Verona in Week 9 provided a shock to the system but the 28-year-old can help the Aquile get back onto their feet and get back to winning in style. At West Ham and Porto, the career of Felipe Anderson showed signs of stagnation, but his return to Lazio has so far represented a much-needed return to form for the Brazilian midfielder.