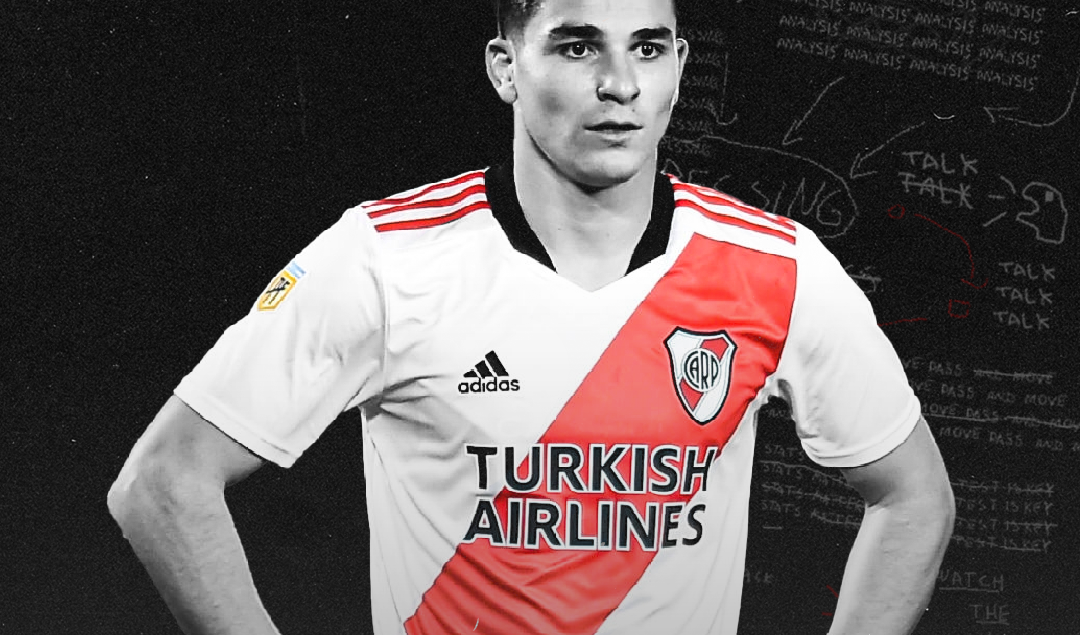 “We cannot replace him” remarked a tearful Pep Guardiola after Sergio Aguero’s final game, a 5 nil thrashing of Everton.

Since then Manchester City have pursued a £125 million deal for Harry Kane which famously fell through and are now many bookies favorites to sign Erling Haaland in the summer.

It’s highly unlikely City would attempt to sign both in the summer but in a world where FFP sanctions seemed to be up for negotiation, nothing is off the table.

But City have already signed a striker who, on paper, looks about as close as you could get to a Sergio Aguero Replacement; Julian Alvarez.

At 5ft6, it’s impossible to ignore the diminutive striker’s similarities to the Man City great, but to label him ‘the next Aguero’ and forget about him until he rocks up at the Etihad in the summer would be ridiculous.

Who Is Julian Alvarez?

City sporting director Txiki Begiristain said that the club had been tracking Alvarez for a long time before the deal was done, which makes sense as he has been on the radar of big European clubs since the age of 11.

Alvarez had a successful trial at Real Madrid but wasn’t old enough to make the permanent move to Europe. Instead, he returned to Argentina and developed at his local side Atletico Calchin.

As is so often the way in Argentinian football Alvarez could’ve easily ended up a Boca Juniors when he made the move from his native Cordoba district to Buenos Aires. As fate would have it he signed for River Plate at the age of 18 and hasn’t looked back since.

It’s obviously difficult to say from Alvarez’s limited time in the limelight but he comes across as a dedicated professional with his feet on the ground.

The meticulous Argentine media have picked up on stories like Alvarez buying his first coach a truck to show his gratitude, while River manager Marcelo Gallardo has said “Any coaching staff would love to have him”.

The Cordoban blew the league away last season with an outrageous consistency. 24 goals and 15 assists in just 46 games to be precise. Some criticism has questioned whether he’s a goalscorer or a playmaker, but for now he is both and long may it continue.

He has started this season, unsurprisingly, in the same vein. 5 goals in 6 games proving he hasn’t let his big move affect his focus on the job at hand.

Alvarez can play anywhere along the front three as well as just in behind the striker and he’s been used everywhere by Gallardo at River.

Tiresomely, his ability to pick the ball up on the half turn and carry it past players into the final third has led to Messi comparisons, but it’s certainly a highly impressive weapon in Alvarez’s arsenal.

Manchester City: A Club at a Crossroads

There are three noticeable traits that stick when you watch Alvarez over a period of time. Firstly is his dogged work rate off the ball.

So often in the last decade, we’ve admired the relentless nature of South American forwards playing style, whether it be Edinson Cavani, Luis Suarez or Carlos Tevez.

If there is anything that will quickly endear the young striker to fans in England it’ll be his ability to press off the ball even when things aren’t happening for him with it.

Next is how comfortable he is on either foot. It’s such an underrated quality, especially when making the step up. How often have we seen quality players quickly become predictable because defenders wise up to their trademark?

This won’t be an issue for Alvarez who possesses both excellent finishing and a good weight of pass on either foot, although he is predominantly right footed.

Speaking of being two-footed, the ‘spider’ as he’s known, most similar strength to Aguero is his near post finish.

When forced wide on either side of the pitch he has it in the locker to lash the ball into the roof of the net. Think Aguero against a De Gea or to see Alvarez do it watch his goal against Patronato, one of three goals in the game.

The versatility and range of ability that separates Alvarez from every other youngster in South America will prove to be the making or the breaking of him in Europe. Will he need to narrow down and become a specialist or will he progress into one of the world’s best?

Is Man City the Right Move?

Let’s face it, moving to Manchester City is very rarely the wrong move for a talented player since the Guardiola era began. Alvarez will be given plenty of time to bed in as we’ve seen with Joao Cancelo, Rodri and Riyad Mahrez who have all come good after being eased in.

Playing time also tends to be a guarantee with City usually competing in four competitions for nearly the entirety of the season. Finally, who better to take a player to the next level than the man who oversaw the meteoric rise of one Lionel Messi?