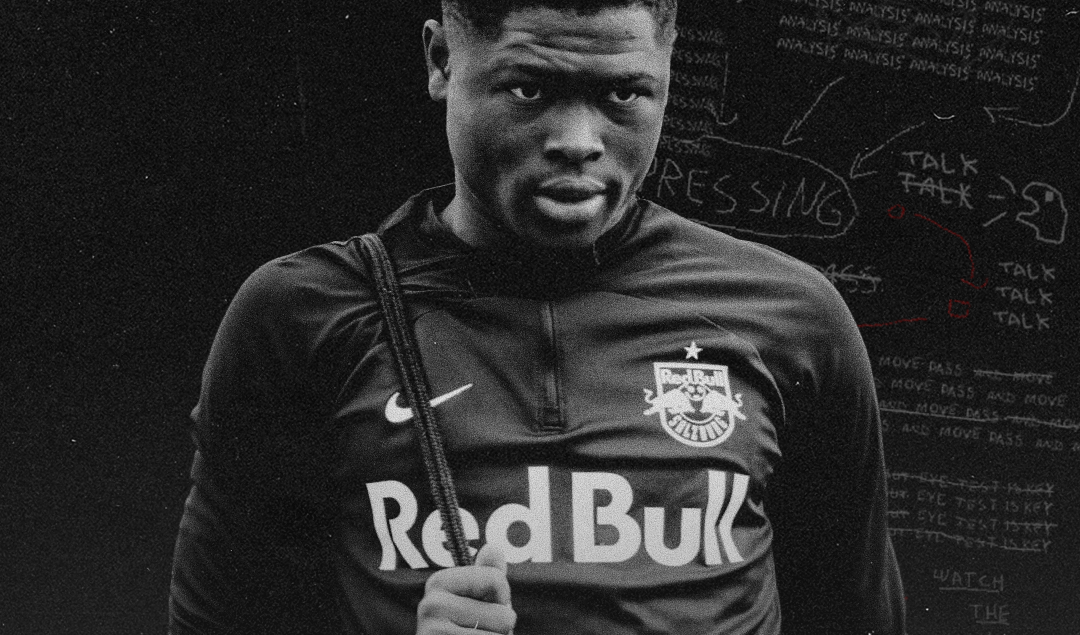 Karim Konate is arguably the most exciting talent to come out of the Ivory Coast in the past couple of years. Providing the physicality of Sebastian Haller, the dribbling of Jeremie Boga, and the finishing of Wilfried Zaha, Konate is the complete package. It’s the reason why ASEC Mimosas sold Konate to Salzburg for a club-record fee of $3.5 million dollars; more expensive than the club’s next three most valuable exits.

There’s a reason he’s drawn comparisons to Erling Haaland, who also played for Salzburg, and there’s a reason why he’s leading both FC Liefering and the Salzburg youth team in goals scored; he’s really good. Although he could not shine alongside youngsters like Enzo Fernandez and Josko Gvardiol in the World Cup, he might be just as good, if not better than them.

From Abidjan to Salzburg

Konate’s story starts in the village of Ouraghio, where footballers like Franck Kessie, Wilfried Singo, and more were born. But, before long he attracted attention from all over the Ivory Coast, handling interest from numerous top-flight clubs at the tender age of 19. It’s only fitting that the wunderkind chose the La Masia of Africa, ASEC Mimosas.

He quickly rose up to the top of the depth charts with the arrival of the 2021-22 season, starting in all of his club’s important matches like the CAF Champions League and Confederations Cup. Konate began drawing interest continentally when he scored a brace against Algerian giants CR Belouizdad, but to no avail as ASEC Mimosas lost on away goals.

In the Confederations Cup, he wreaked havoc. He scored seven goals in eight Confederation Cup matches, including four in six group stage games. That was good enough for third-most goals scored in the entire tournament despite their ASEC Mimosas’ early exit. His goal-scoring record continued at home, where he slotted in 20 goals in 29 league games.

His goals scored, along with his youth and promise, earned him a lucrative transfer to RB Salzburg, one of the most avant-garde teams in the world. But he would not play for Die Roten Bullen right away. He would join Salzburg as a co-operation player with Salzburg’s farm team, switching between playing for the Salzburg youth team and FC Liefering in the Austrian second league. “I chose Salzburg because they are an ambitious club like me with the same game vision,” he stated. “They are such a competitive team that plays in European cups, and I also want to compete in them, so I didn’t hesitate.”

He’s already impressed in Austria, showing that he may be above the standard youth competitions and second-tier league matches. He’s certainly ready for first-team football. Konate has five goals in six UEFA Youth League games, three of which came from his Man of the Match performance against Chelsea with dozens of scouts looking on. Konate has not slumped at all in Liefering either; he’s second in goals scored with ten in thirteen games, with a hat-trick coming against Rapid Wien’s second team. He’s also earned five caps for the Ivorian national team.

You can definitely describe Konate as a Football Manager wunderkind. Following in the footsteps of Karim Adeyemi, Erling Haaland, and Patson Daka, Konaté has been identified by Red Bull scouts as a potential superstar using a mix of data and gut feeling. And you cannot blame them; Konate provides both.

Konate usually plays as a center-forward, frequently roaming the left wing despite his tendency to use his right foot, but he is also capable of switching to the right wing if necessary. He’s had the most success playing in a two-man attack system, whether it was the 4-4-2 of Julien Chevalier’s ASEC Mimosas or the 4-3-1-2 prevalent throughout the Salzburg set-up.

He is 1.78 meters tall, or 5’10. It means he’s somewhat shorter than what a typical target forward would look like, despite his accurate finishing. His physique invites comparisons to a taller winger, or a more creative, active poacher. The poaching playstyle definitely suited him and his immense footballing IQ in the rigid Mimosas system that favored quick build-ups and fast-paced action.

The majority of his goals in the Ivory Coast came from incisive runs that led to shots. Konate was a great player for ASEC Mimosas; he was someone who could create offense just from his shooting; but his absence would not doom Mimosas. The team had other players to call on to create, make plays, and score. Although Konaté was the best player on the team, he did not have to break his back making Maradona-esque dribbles through the midfield for goals.

With Salzburg, it’s been more of the same; making runs, knocking in headers, and scoring goals as a traditional striker. But Salzburg brought out some of his hidden talent, like his playmaking,  In a game against Horn for Liefering, Konate received the ball one-on-one with a defender on the left-wing. He takes the ball, sizes up the defender, before cutting inside and finishing the whole sequence with his right foot to score.

It’s a series we’ve seen before from academy players and Premier League stars. But it gives Konate a new layer of lethality that many players do not have. Konate has an impressive finishing ability; from his head and both legs, he has dribbling, and he has shrewd positional awareness. You cannot fit Konate into a single archetype, much less a whole style of play. It’s mostly down to his fluidity and dynamism, as well as the lack of stats to look at. From watching him, he evokes comparisons of a less creative Christopher Nkunku.

Both can beat the back line with ease to set up dangerous 1v1s with the keeper, both have a similar level of clinicality. However, Konate does not set up plays at Salzburg like Nkunku does at Leipzig, and Nkunku often plays in a wider role than Nkunku. Patrik Schick (clinicality), Ante Budimir (reliability in the box), and maybe even Giovanni Simeone(comfort on the ball).

Konate is not like the wunderkinds of today; flashy, with great passing and skills that look like they came straight out of FIFA. But he may trump new strikers of today thanks to his sheer goalscoring ability. His intelligence and positioning makes him a perfect deep-lying forward, and his dribbling and finishing can put him into a myriad of roles; from winger to maybe even second striker or attacking midfielder.