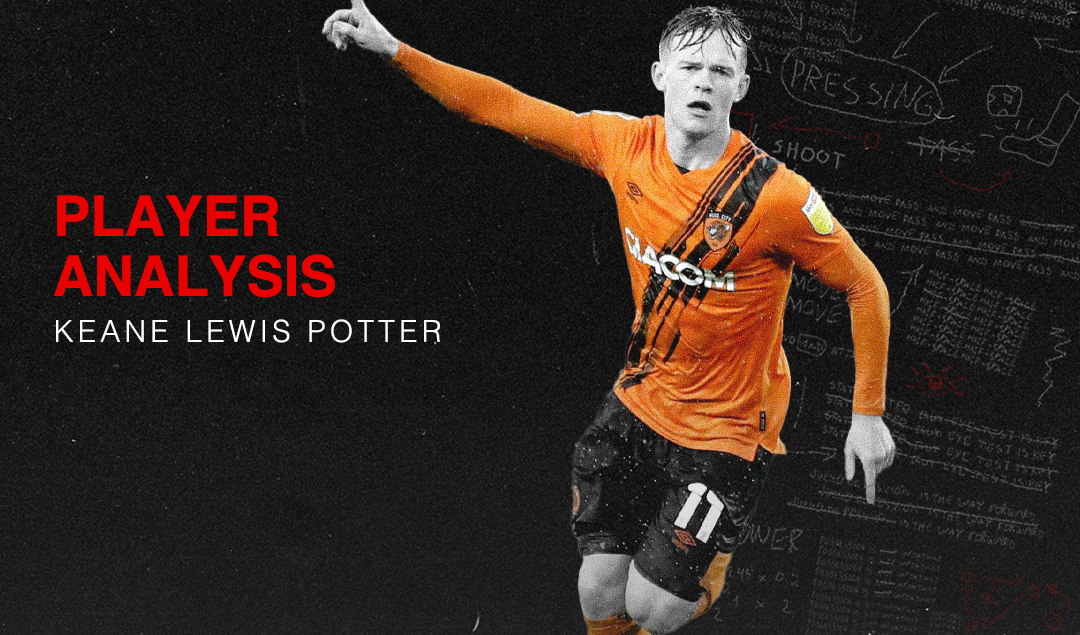 Keane Lewis-Potter is heading in the right direction.

The 21-year-old emerged as one of the Championship’s best young players last term, contributing 12 goals and three assists in 46 appearances for Hull City. It wasn’t his first rodeo, though. He netted 13 times in League One in the previous season, helping the Tigers achieve promotion in his rookie campaign.

With his contract due to expire next summer and Premier League clubs circling, everything points to Lewis-Potter departing his hometown club in the coming weeks. But is he ready to make the jump into the top-flight?

While it isn’t typical for young players to rise three divisions in as many years, the England U21 international has many of the attributes required to thrive at a higher level, starting with his positional versatility.

Although Lewis-Potter is at his best when deployed on the left wing, he is comfortable playing in any attacking position and has valuable experience at wing-back, including against Everton in the FA Cup.

Back in November, he featured on both sides of defence and at centre forward in a 2-1 win for Hull over Millwall. It was a head-spinning experience for the 5’7” wide player – but his ability to absorb coaching instructions is an attractive quality to Premier League admirers.

However, his scoring touch is what separates Lewis-Potter from other Championship prospects. According to Wyscout, he has outperformed expected goals (xG) throughout his career, finding twine 31 times compared to an expected haul of 26.63.

When a forward surpasses xG over a sustained period – two seasons, in this case – it suggests there is something more to their finishing talent than luck. It is not a guarantee that Lewis-Potter will continue to bamboozle the spreadsheets, but it implies there is something replicable about his work in the penalty area.

His latest goal came on international duty against Kosovo’s U21s. Despite being physically out-matched, Lewis-Potter opened the scoring for the Young Lions with a headed effort, moving sharply to create separation from his marker, Andi Hoti.

The former Bradford (Park Avenue) loanee’s off-the-ball play once Harvey Elliott received possession is commendable. First, he positioned himself between the centre-backs, forcing Hoti to decide whether or not to follow him.

Next, he dropped into the 19-year-old’s blind spot, making his run more difficult to track. Finally, he sprinted back into channel to score a powerful header.

While the diminutive forward is unlikely to develop into an aerial powerhouse, his ability to escape defensive attention is a feature of his profile that will help him adapt to playing at a higher level. Lewis-Potter’s previous goal came on the final day of the season versus Nottingham Forest. Again, the former EFL Young Player of the Month’s movement was clutch.

With Hull trailing 1-0 in the 94th minute, directness was the name of the game for Shota Arveladze’s side. As a result, Lewis-Potter started his run as Lewie Coyle received the ball, catching his markers off-guard to tie the match with a lunging effort.

Although the travelling side’s defensive play was far from perfect, the 21-year-old’s intuition and footspeed fly off the page: instinctual penalty area players tend to thrive in the Premier League.

A fortnight earlier, he scored in Hull’s 3-0 win over Reading. In this example, Lewis-Potter combined his directness and quickness off the mark with a ruthless finish:

With his shooting angle diminishing by the second, he fired a powerful strike over Orjan Nyland to score in the only visible section of the net. Tidy.

His keenness to attack at speed also shines through on the dribble, especially when deployed on the left, as demonstrated in a 2-1 win over Cardiff City:

Lewis-Potter has averaged 4.51 dribbles per 90 throughout his career so far, completing just over half of them. He is therefore well-suited to playing in a system designed to create chances for inside forwards on the transition.

However, he has work to do on his weak-footed delivery, as shown above. Despite being at home on the left flank, Lewis-Potter is right-footed and has only completed 32.4 percent of his crosses to date. If he is to succeed in the top-flight, he must round out his playing style: opposition defenders will stifle him otherwise.

Even so, Lewis-Potter is extremely popular at KCOM Stadium and has attracted interest from West Ham and Brentford this summer. At the time of writing, a move to the Bees is most likely, with Thomas Frank’s side close to completing a £20 million swoop for the youngster.

“That’s the most difficult question you could ask me [about Lewis-Potter’s future],” Arveladze told Hull Live last month. “I can only answer this way: the chairman wants him [and] the coach is crazy about him.

Lewis-Potter’s trajectory is promising. His offensive intelligence, pace, and eye for goal suggests he is well-suited to making the step up into the Premier League. He is not perfect, though. Despite impressing as a youth international, the Hull-born forward has work to do on his crossing and must add muscle to his frame.

However, Keane Lewis-Potter has time on his side. If he translates his positional versatility into further technical and physical development, he will become an electric player in the Premier League. Keep an eye on this one.