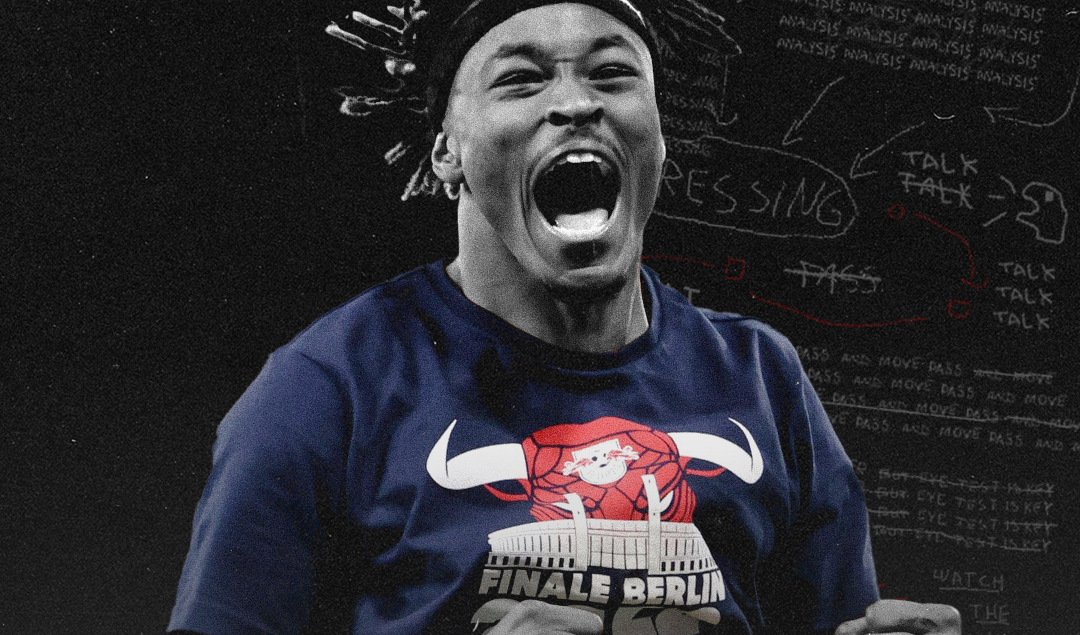 Last summer was one of immense turnover at RB Leipzig. Head coach Julian Nagelsman was lost to Bayern Munich, as were key players Dayot Upamecano and Marcel Sabitzer, while Ibrahima Konate also departed the club.

After the short and failed tenure of Jesse Marsch which left Leipzig languishing in mid-table, the club have rebounded impressively this campaign under Dominico Tedesco.

While the German coach undoubtedly deserves much of the credit for the club’s rebound, the gradual improvement of new addition Mohamed Simakan has been vital to their securement of Champions League football.

Simakan arrived in Leipzig from RC Strasbourg in Ligue 1 with a lofty reputation as an exciting ball-carrying, aggressive, versatile defender who could be an adept right-back or center-back. While he had a somewhat slow start to his Bundesliga career, under Tedesco, he found his perfect role as a right-sided center-back in a back three.

In possession, the 22-year-old is an impressive ball-carrier. He’s not especially smooth or skillful technically, meaning that he rarely attempts to take players one-on-one or in congested areas.

In fact, he can often appear to be somewhat uncomfortable and rigid on the ball. However, these limitations and aesthetic quirks should not conceal his genuine ability on the ball.

Simakan excels at carrying over longer distances, building momentum until his sheer physicality and pace makes retrieving the ball from him virtually impossible. Simakan’s impressive 0.98 carries into the final third per 90 highlight his tendency to stride with the ball over long distances to the benefit of his team.

The speed at which he plays the ball is also an important aspect of his possession game. He’s not the most ambitious passer, but Simakan consciously attempts to speed up the tempo of Leipzig’s build-up by passing the ball quickly.

He’s quite two-footed for a center-back, enabling him to move the ball on without having to take a touch to switch it to his dominant foot first. Furthermore, Simakan uses his body intelligently to shield the ball under pressure. As such, he can maintain the quickness of his passing even when he’s being pressed by an opposition player.

Defensively, Simakan is an aggressive and fierce presence. One of the reasons he’s markedly improved under Tedesco is that he’s given greater license to play to his natural instincts and push forward to engage in defensive duels as an outer center-back in a back three as opposed to being a fullback or center-back in a back four.

Simakan is built strongly both through his core and legs, giving him an advantage in tussling with forwards during defensive duels.

He also has explosive pace, capable of quickly accelerating to push high and get tight to his opposite man and covering space in behind if required. These two physical strengths enable Simakan to play aggressively, biting into challenges safe in the knowledge that he can dominate most opponents.

Complementing these physical traits are Simakan’s impressive defensive technique and tactical acumen. Despite being an extremely aggressive player, he has a good understanding of how far to venture outside of his typical defensive zones to ensure he doesn’t disjoint the team’s defensive structure.

Once engaging in a duel, he jockeys well and uses his body well to get between the opposition player and the ball. Far from a reckless tackler, he channels his commitment and aggression in an astute way to maximize his ball-winning ability.

Since much of his game is predicated on engaging players in close-quarter, one-on-one duels, Simakan utilizes his superb anticipation and agility to predict how his opponent is going to attack and keep with them.

His footwork is excellent, allowing him to stay with and keep his balance against opposing attackers. Furthermore, he reads opposition player movements and body positioning well to foresee how best to stop them.

There’s no doubt that Simakan will be integral to RB Leipzig’s pursuits next season. With Borussia Dortmund losing Erling Haaland and Bayern Munich both having a relatively tame season and possibly losing Robert Lewandowski, Tedesco and his team could enjoy a remarkable season in the Bundesliga.

Simakan, with his blend of poised aggression, physical prowess, and sharp ball-carrying, should be a key player in whatever success they enjoy.

At 22-years-old, he still has plenty of room to improve, particularly in possession, but under an astute coach like Tedesco and in a tactical setup that suits his strengths, there’s no reason to think he will not continue to ascend as a defender in the Bundesliga.

Mohamed Simakan possesses a rare combination of physical and tactical qualities which make him a uniquely talented player, and he remains one of the most intriguing defensive prospects in Europe at present.