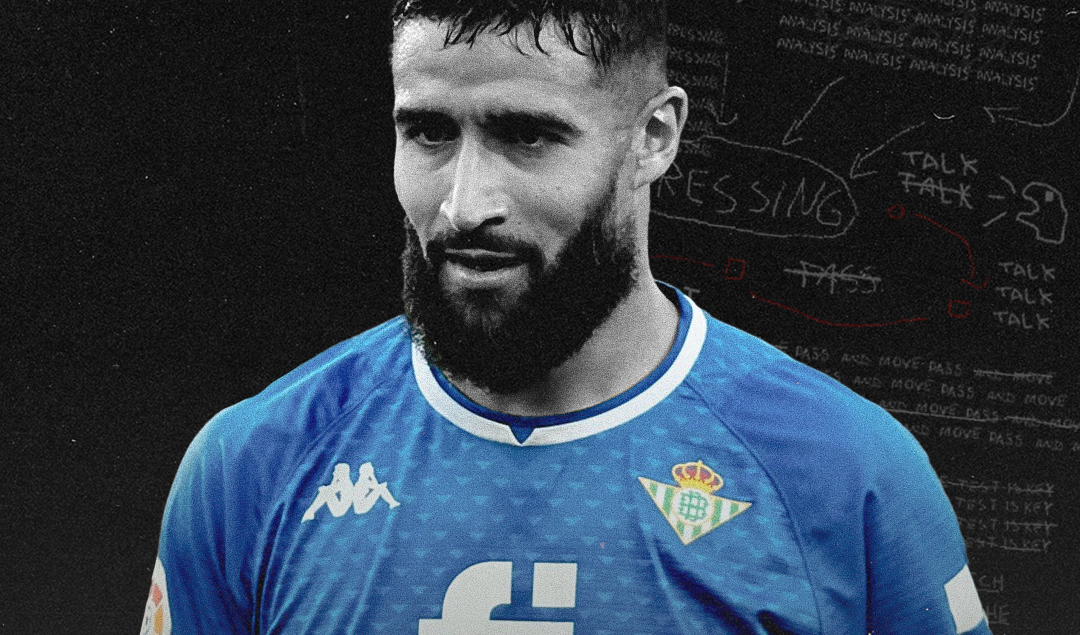 Nabil Fekir surprised everyone with his move to Real Betis after having been linked to bigger clubs in Europe. However, he is doing well in the Spanish team, recently winning the Copa del Rey. He is a starter and one of the main protagonists in a team full of exciting players that are performing very well this season.

He is known for being a physically strong player but at the same time, having excellent technical abilities. This makes him a rare player as, usually, players have one trait or the other.

Under Manuel Pellegrini, he has been excelling, scoring 8 goals and providing 10 assists. In the analysis, we will see what characteristics make him a special player and his attacking qualities among other details. The data used in this article was provided by FBREF.com.

Fekir plays as an attacking midfielder, and so his initial positioning is in between the lines when Betis builds up, hoping they can find a pass to him. He starts his position here because a pass through the middle is one of the most dangerous ways of attacking as it splits the other team and ensures that your team attacks centrally.

However, it is hard to receive in good conditions when playing in between the lines. As we see below, Betis do find him through the middle but he is unable to turn as he is being marked well. Regardless, Fekir does well as he opens up the play, as seen in the second image.

This shows another advantage of playing through the middle. When doing so, you attract the opponent team to the middle, which then leaves space for the players out wide.

In the second image, we can see how the opponents have all come into the middle and the left-back is in space. This was all caused by Fekir receiving and playing through the middle. 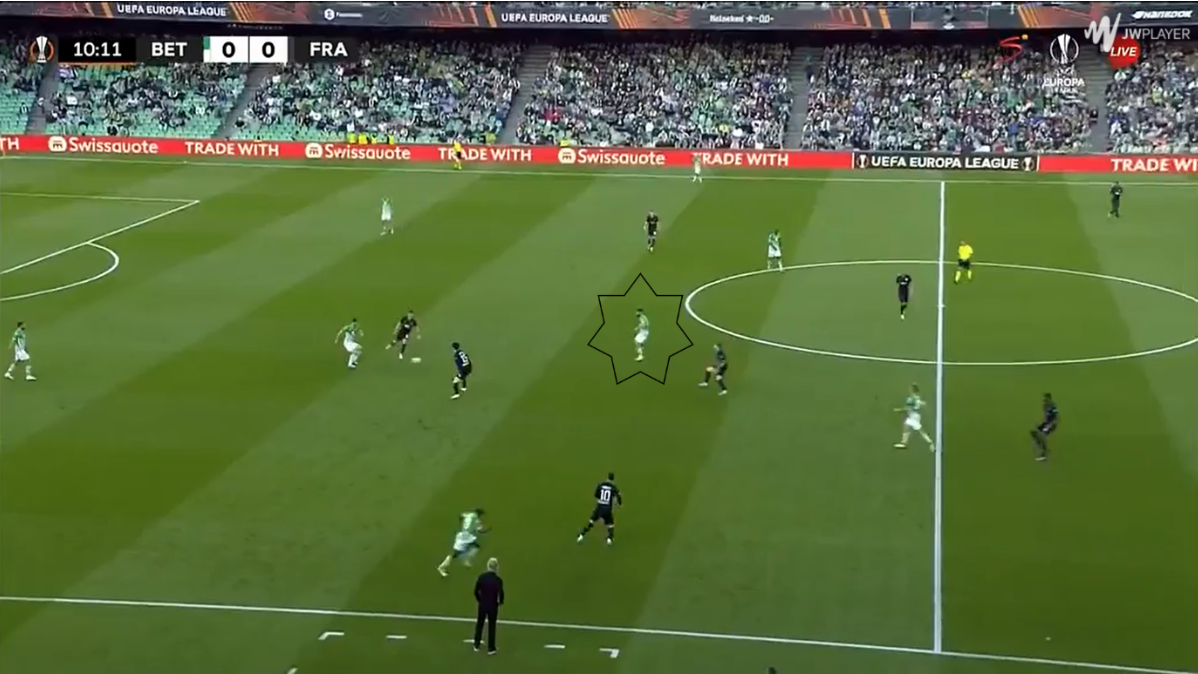 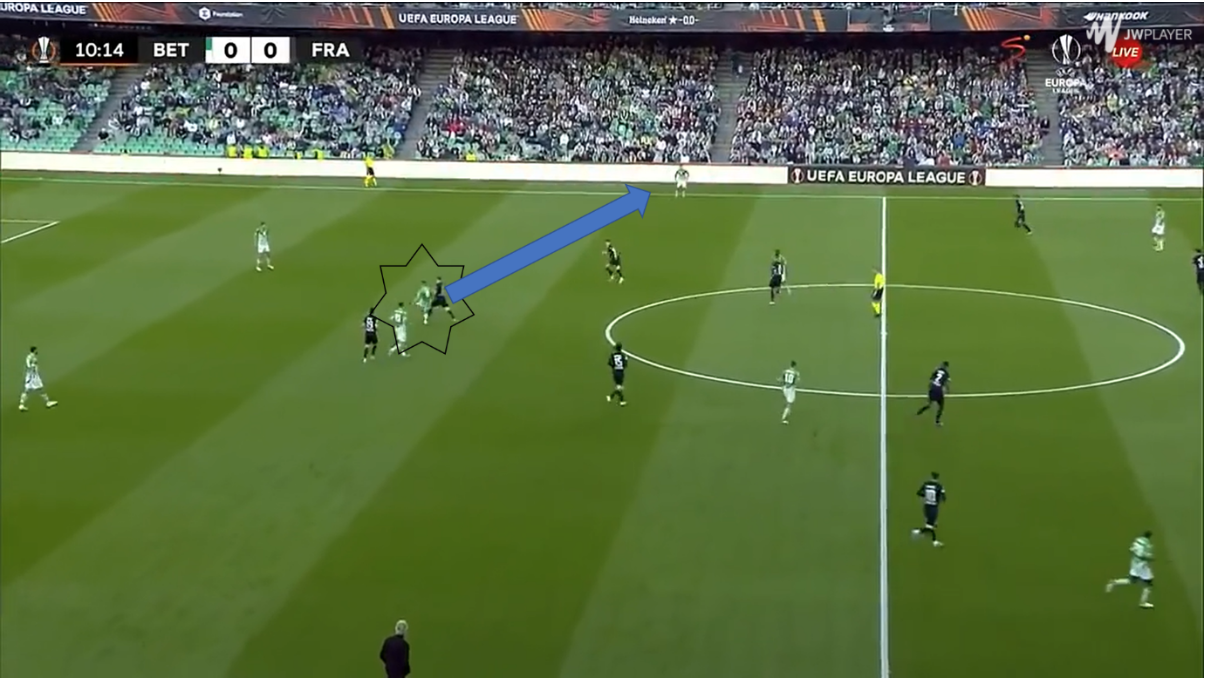 Nonetheless, there are times when Betis are unable to find him as there are few spaces through the middle. In that case, Fekir will come down to help in the build-up seeing as he is one of the most talented players.

In the example below, we see how he has come much closer to the defensive line to receive the ball. With this, he has time and space to look for a pass in the middle and create a play. If he did not do this, he would just be running around and trying to look for space in a congested zone. 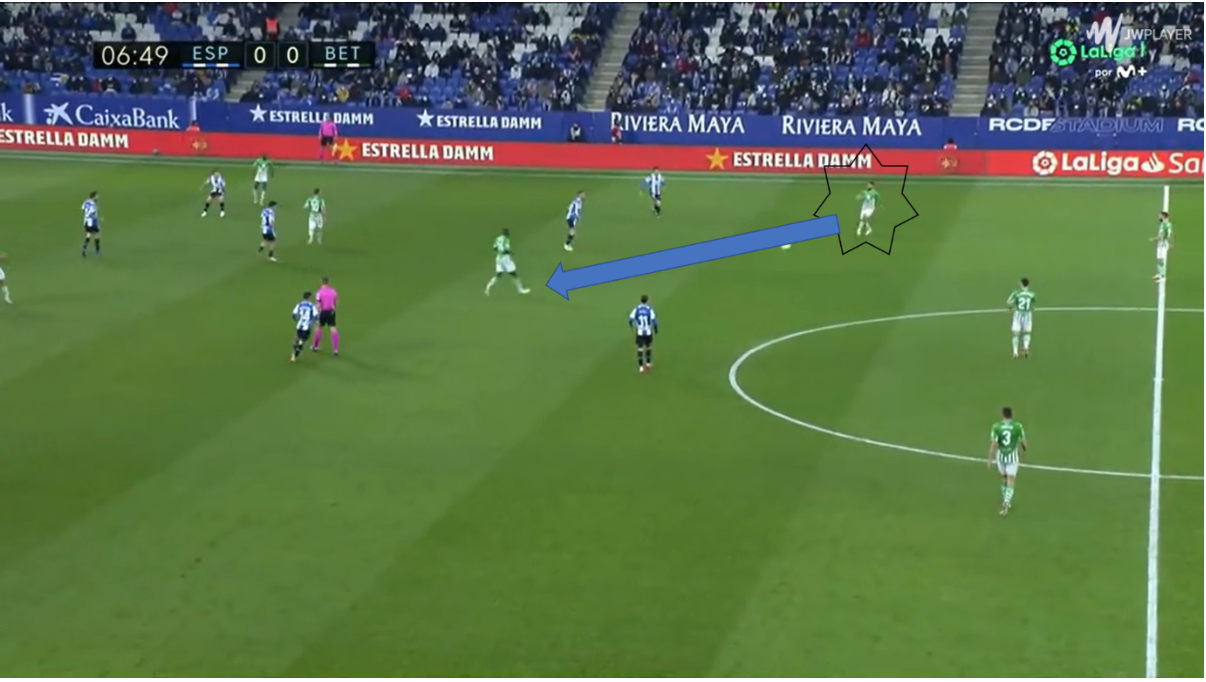 One of Fekir’s main traits is his link-up play with teammates, which makes him such a good attacking midfielder. Having good link-up play shows that he understands the game well and is an intelligent player in order to carry out the necessary movements correctly.

In the example below, we can see how he is surrounded by Espanyol players. However, he sees an option to get out of this, doing a one-two with his teammate. In the first image, we see how he passes the ball and is already initiating his run-in behind the defensive line. 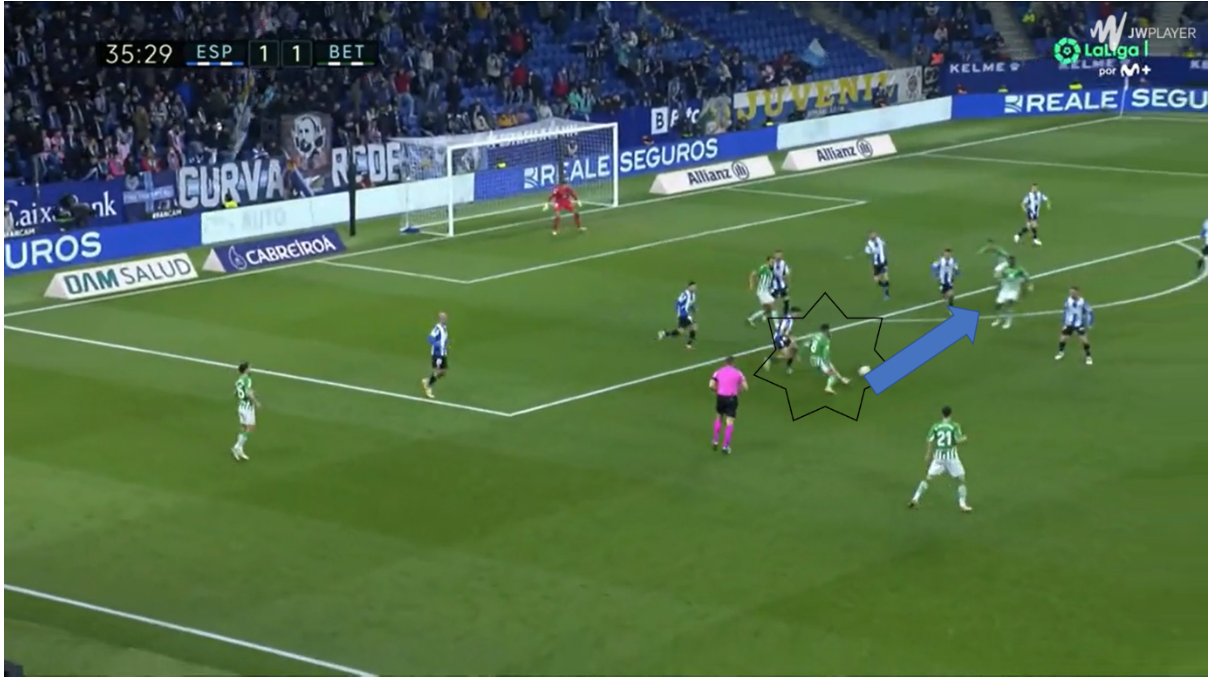 Then, his teammate’s return pass will go over the defence to complete the one-two. Out of a very complicate situation, he managed to escape it and also create danger, even if it did not end up in a goal. 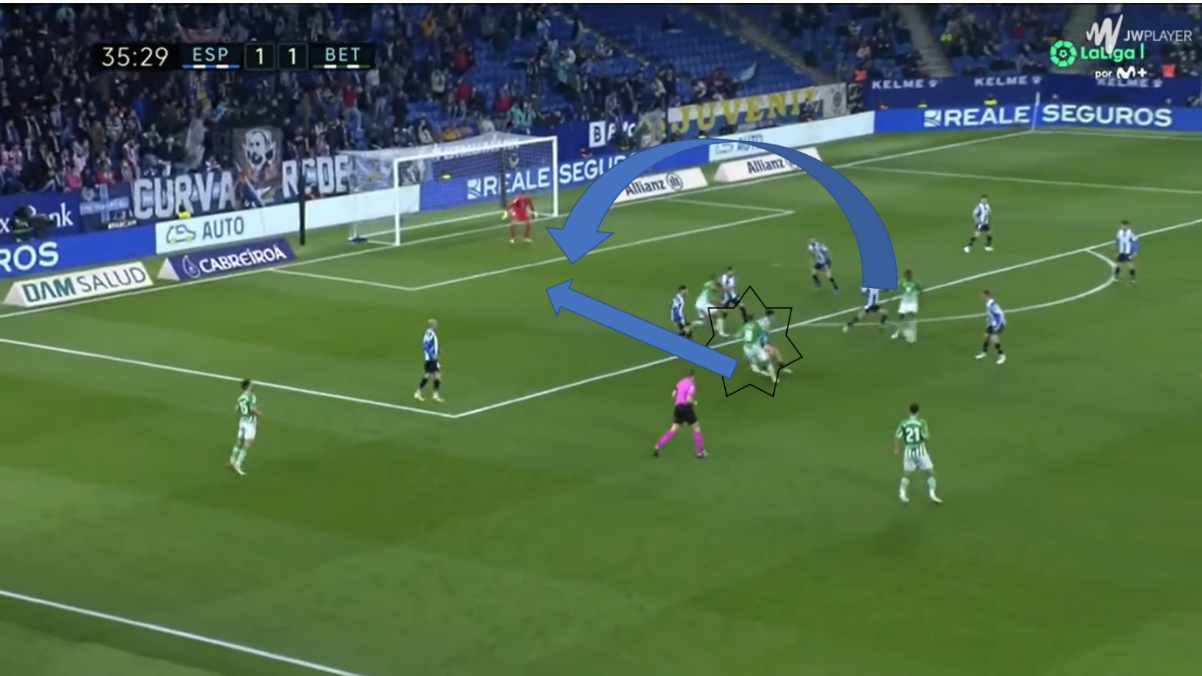 Another example is in the sequence below, where Betis are trying to play the ball out from the back. The left-back is in a complicated situation as he is being pressed and is practically facing his own goal. Seeing this, Fekir comes to help, attracts an opponent, and does a one-two to leave the left-back with time and space to continue the play. 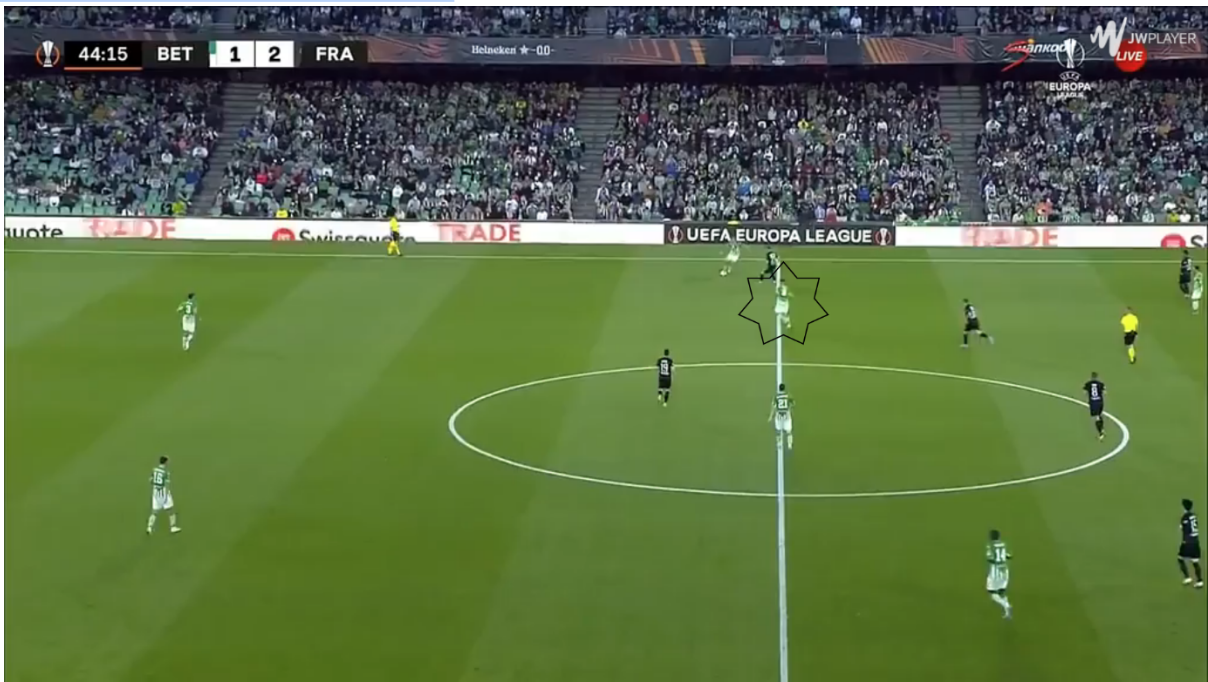 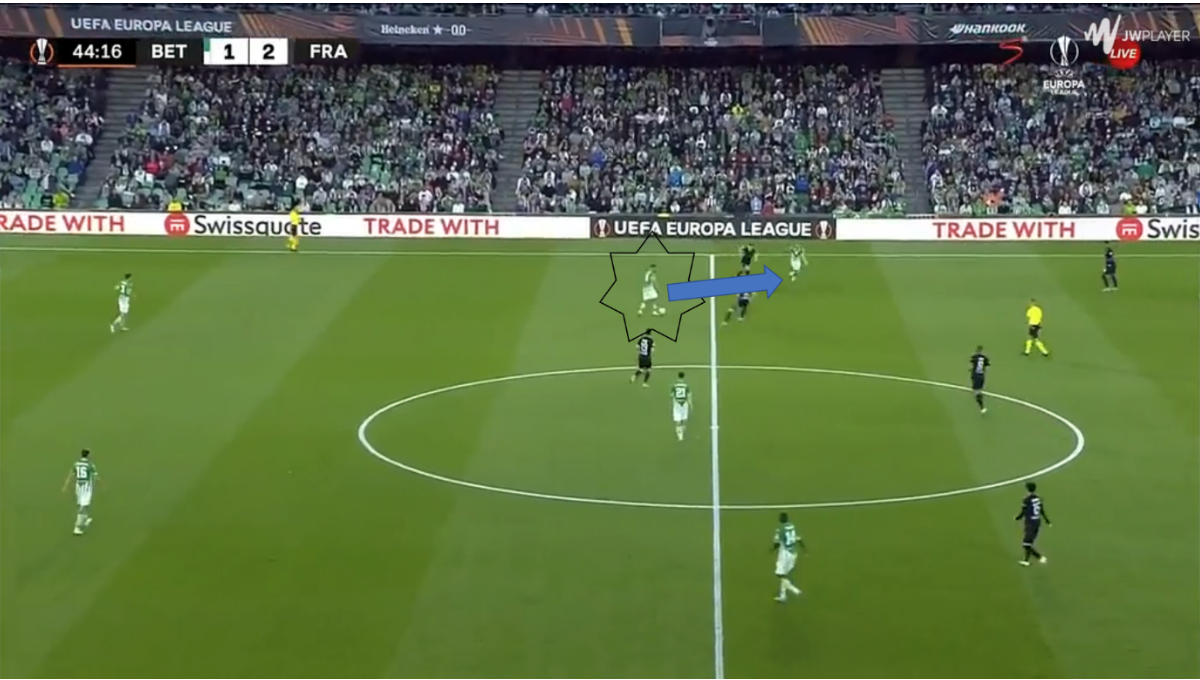 One of Fekir’s main traits is his physical strength, which helps him when holding the ball and turning. It is safe to say that he is one of the best in Europe at doing this. When playing with his back toward goal, he manages to control and protect the ball well, to then turn on the player defending him.

He does this so well that he is usually fouled when doing this. To prove this, he is in the 97th percentile concerning fouls done to him, with 3.75 per game.

We have an example below, where he receives the ball with an opponent pressing him intensely. He manages to retain the ball and when he feels the defender has backed off a bit, turns. In the second image, he leaves the defender and into space. 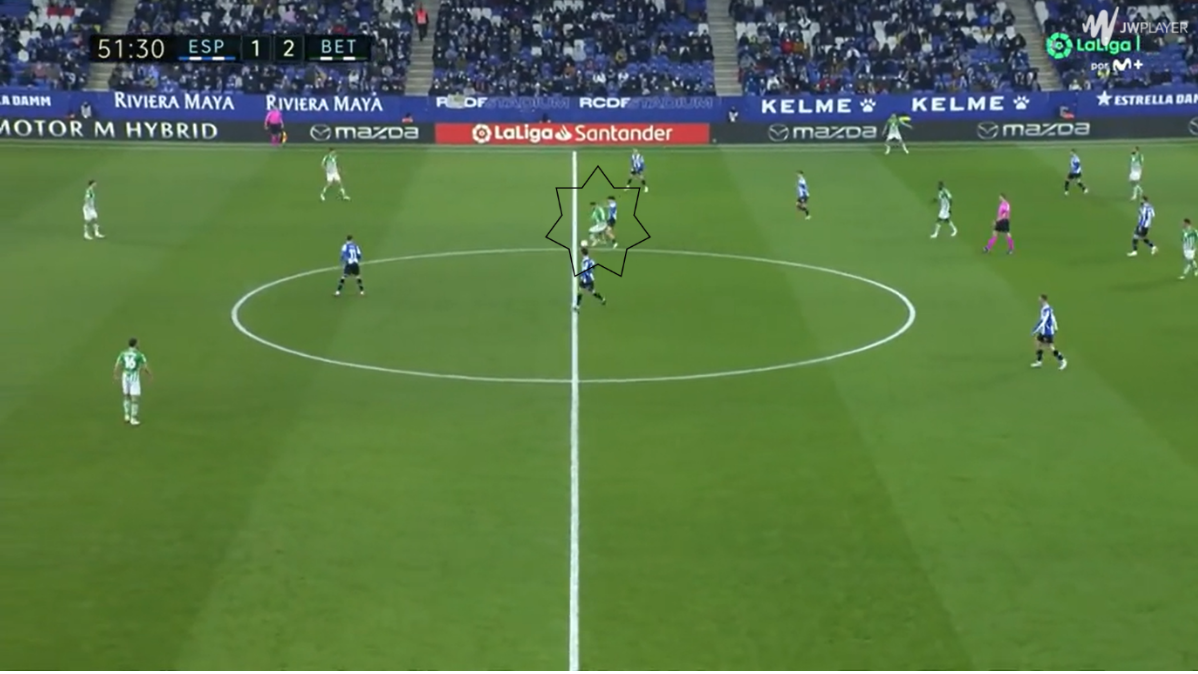 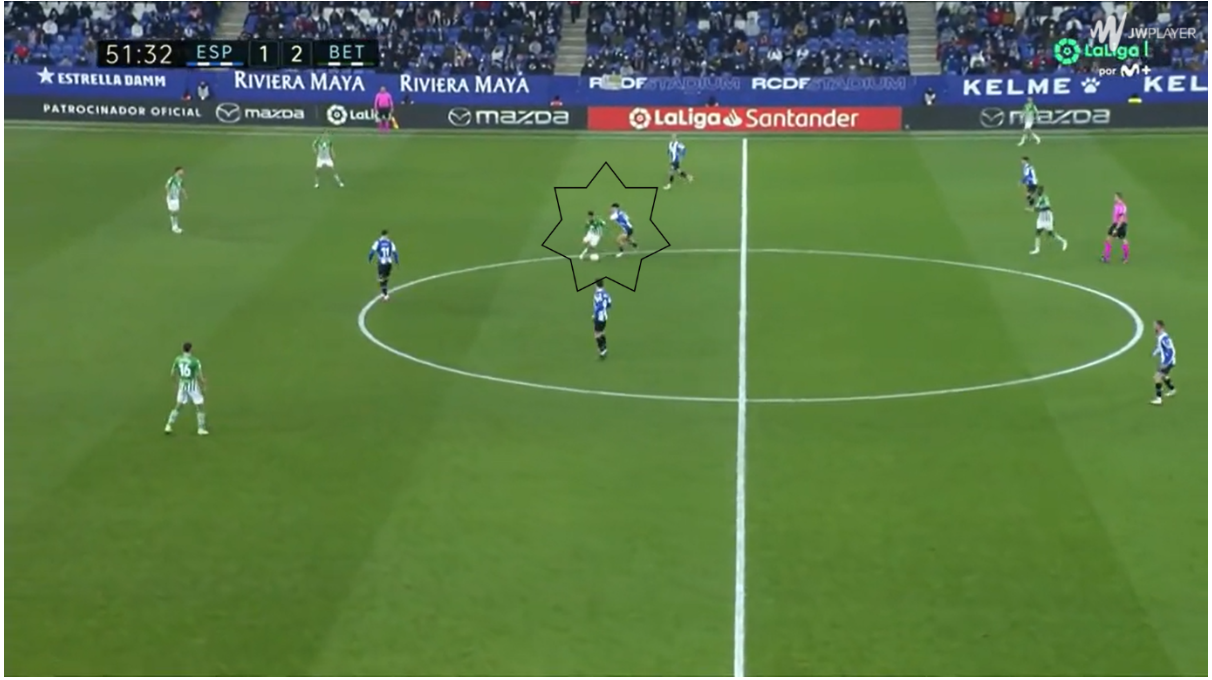 Another example of him holding the ball effectively is shown below, against Eintracht Frankfurt. We can see he is carrying the ball but is being pushed by a strong defender behind him. This does not stop him and in the second image, he is still carrying the ball, with the defender still shoving him from behind.

Throughout the whole play, he manages to keep the defender and maintain the ball, in order to continue the counterattack. Some other players would not have been able to carry the ball effectively under such pressure. 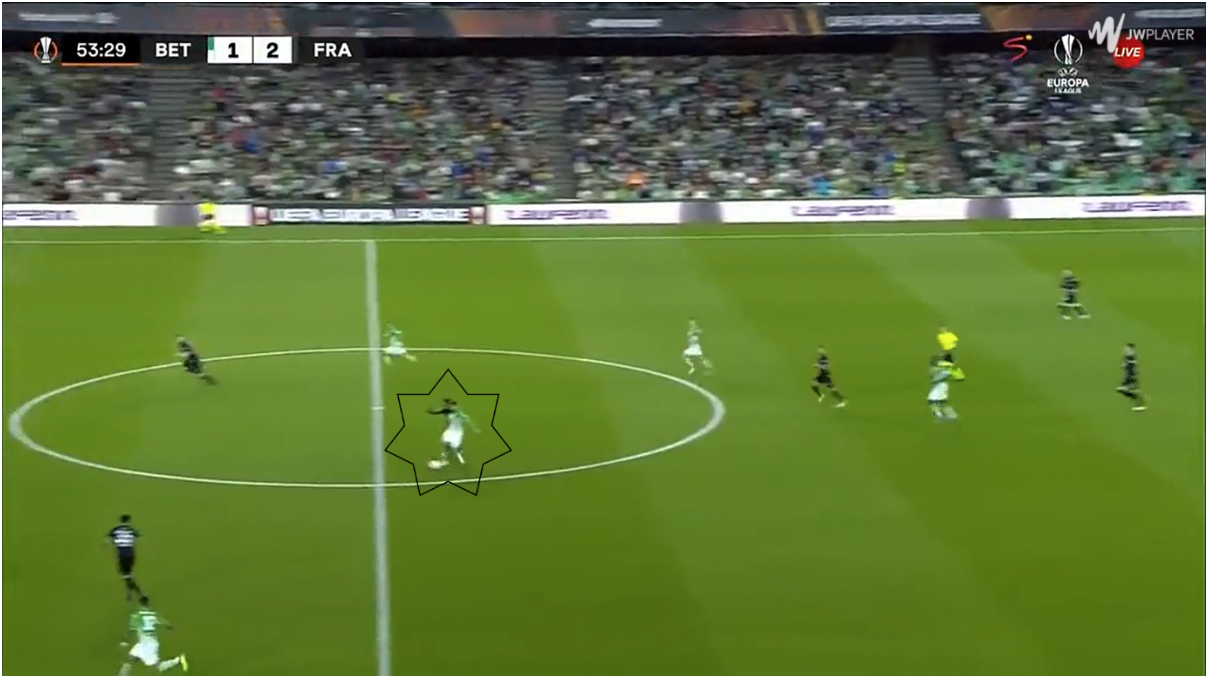 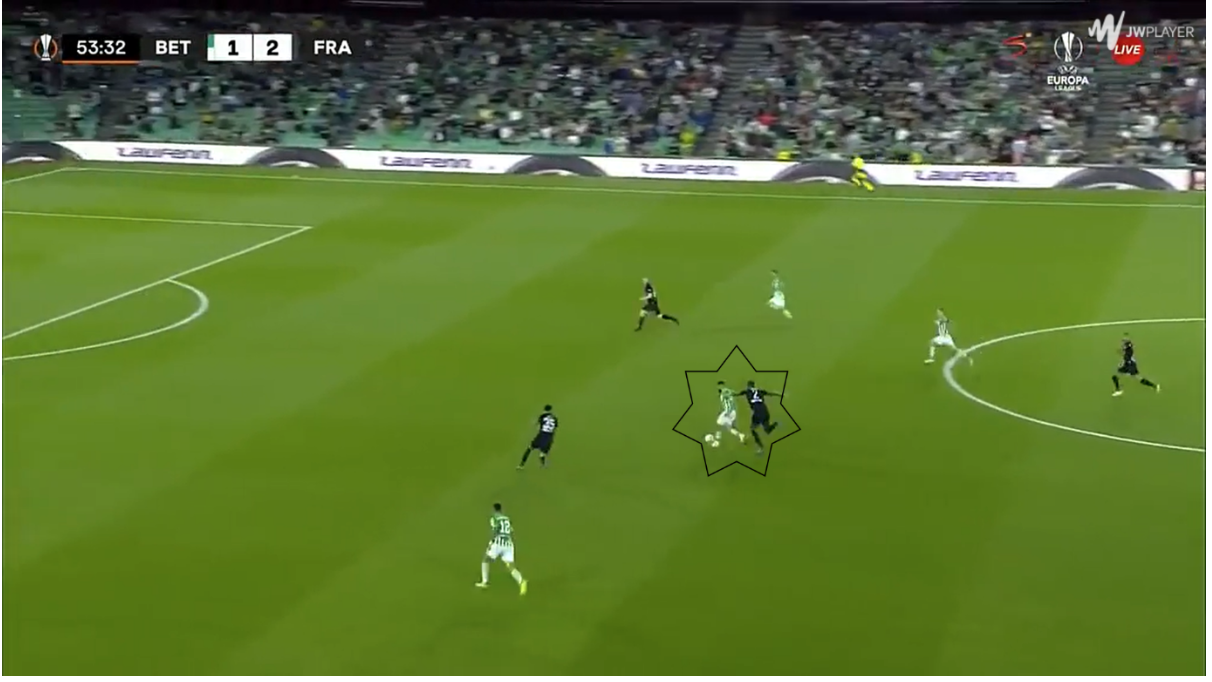 The first aspect to talk about in his playmaking abilities is his ease in carrying the ball and dribbling. He makes 48.76 carries per game, placing him in the 89th percentile.

In fact, he is such a good carrier of the ball that he is the first player his teammates look for when starting a counterattack. This is because he can carry the ball quickly and under control while keeping his head up to look for passes.

This is shown in the sequence below. At the start of the counterattack, the player on the ball has many options but he chooses Fekir. Fekir will then drive the ball always with his head up. 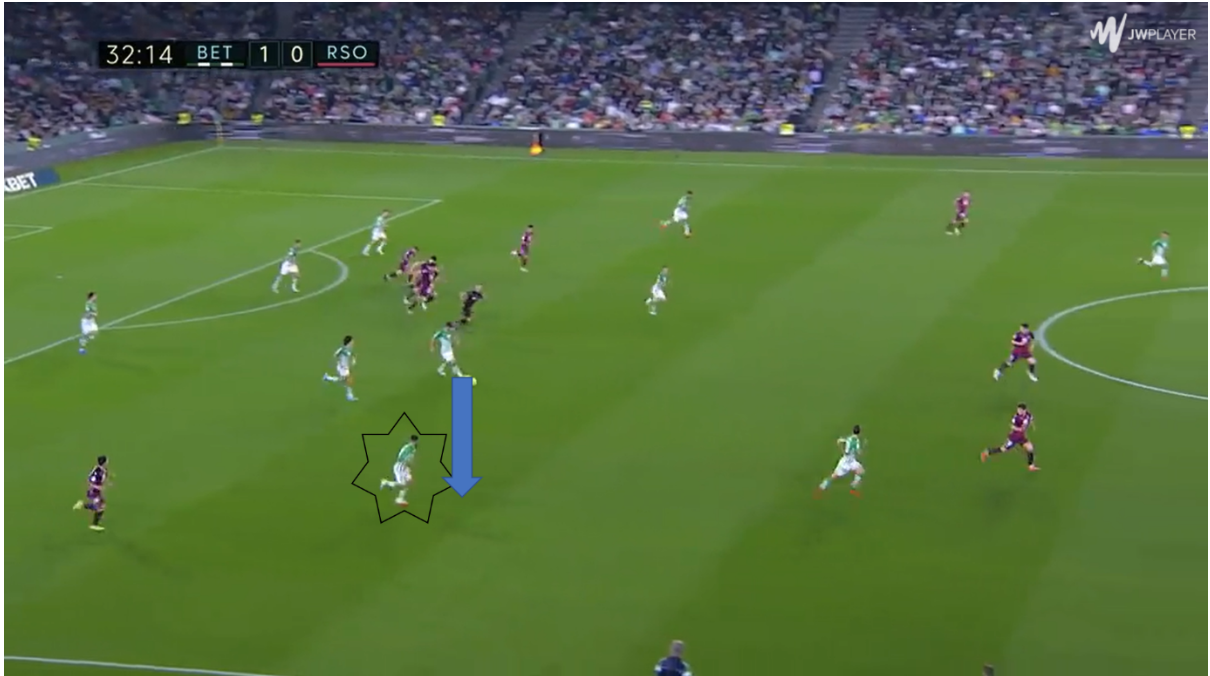 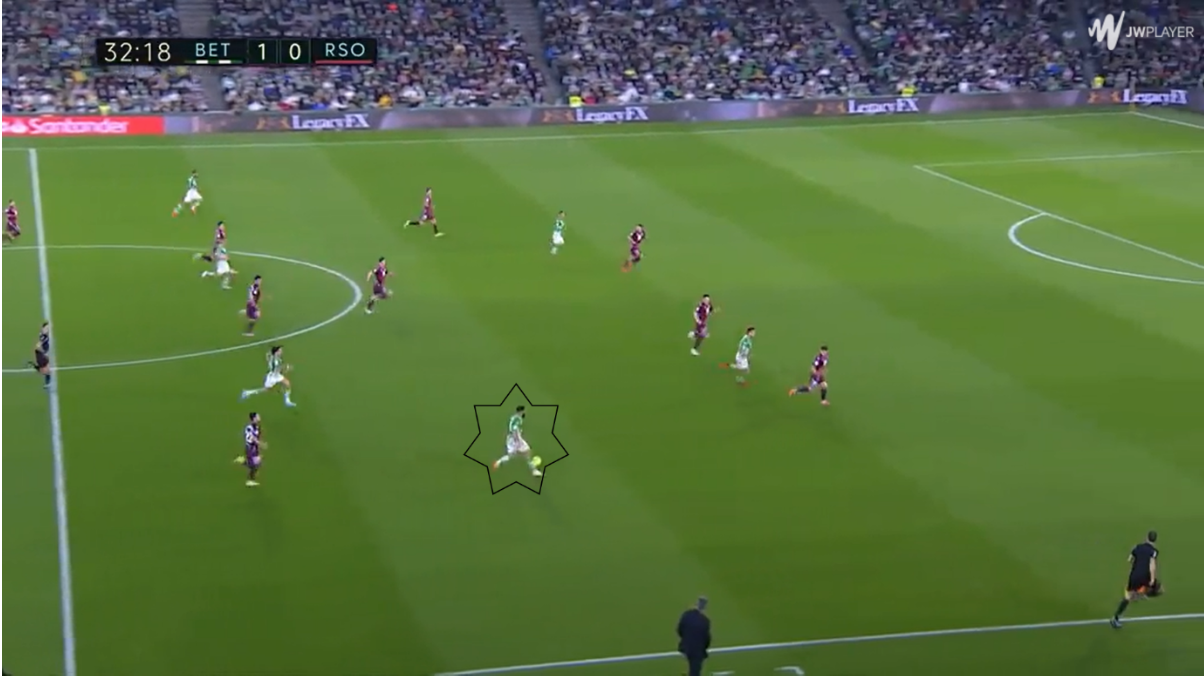 In that instance, there was no clear pass for him to do, but in the image below, we see him carrying the ball and having his head up, allowing him to see the run in behind from his teammate. By having Fekir, Betis have a player that can swiftly bring the ball up in a controlled manner in order to improve the attack at the time. 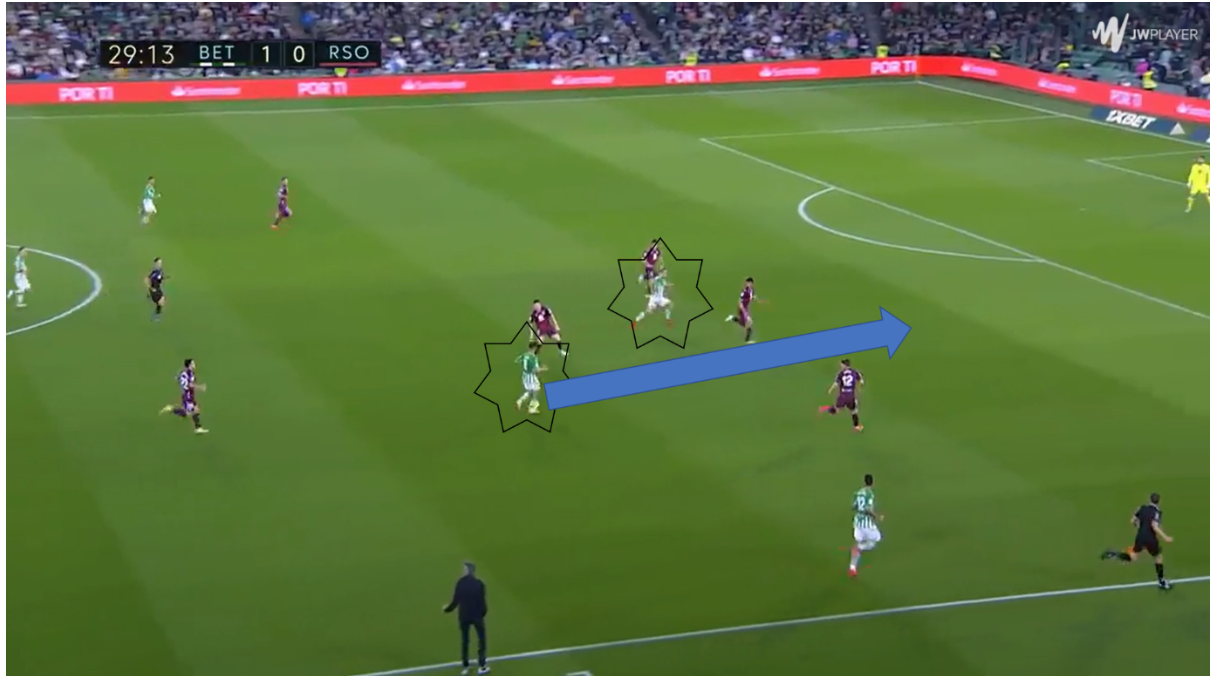 Connected to this is the fact that he has great dribbling skills, which is shown below. He receives the ball in a dangerous position, with a defender coming straight at him. He fakes going towards his own goal and turns, evading the first defender. 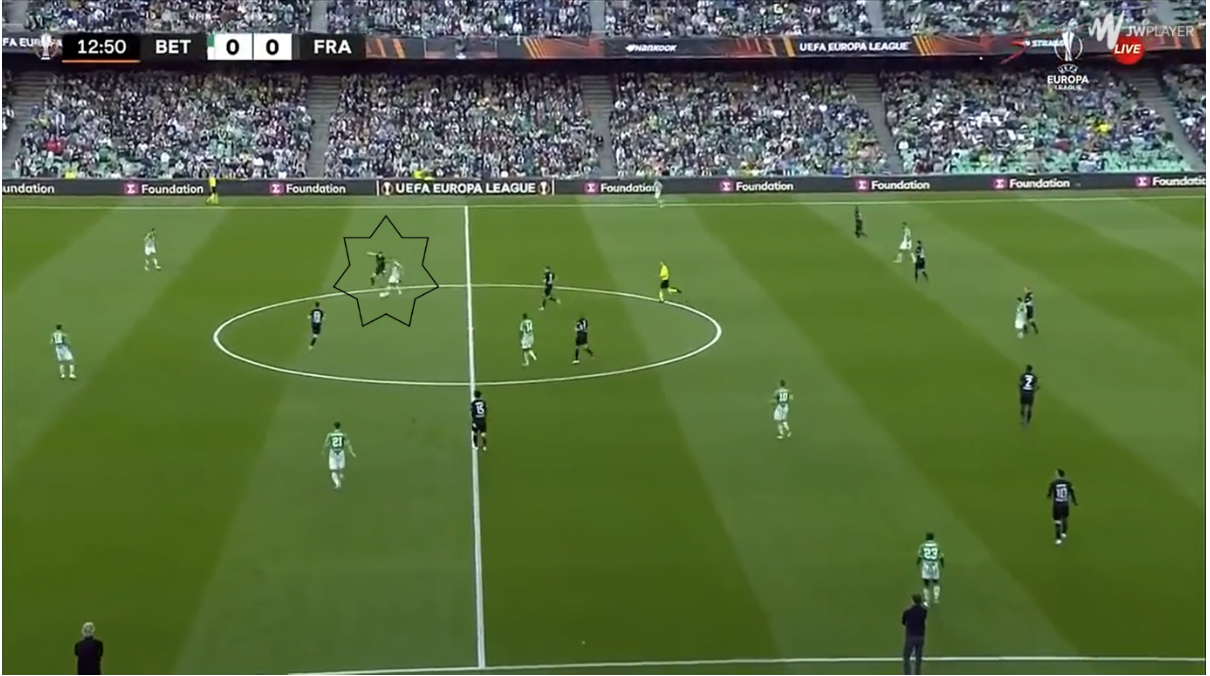 Then, the next opponent quickly comes, which is when Fekir does a quick skill to get rid of him and run into the open space. Therefore, he created a dangerous play from nothing. 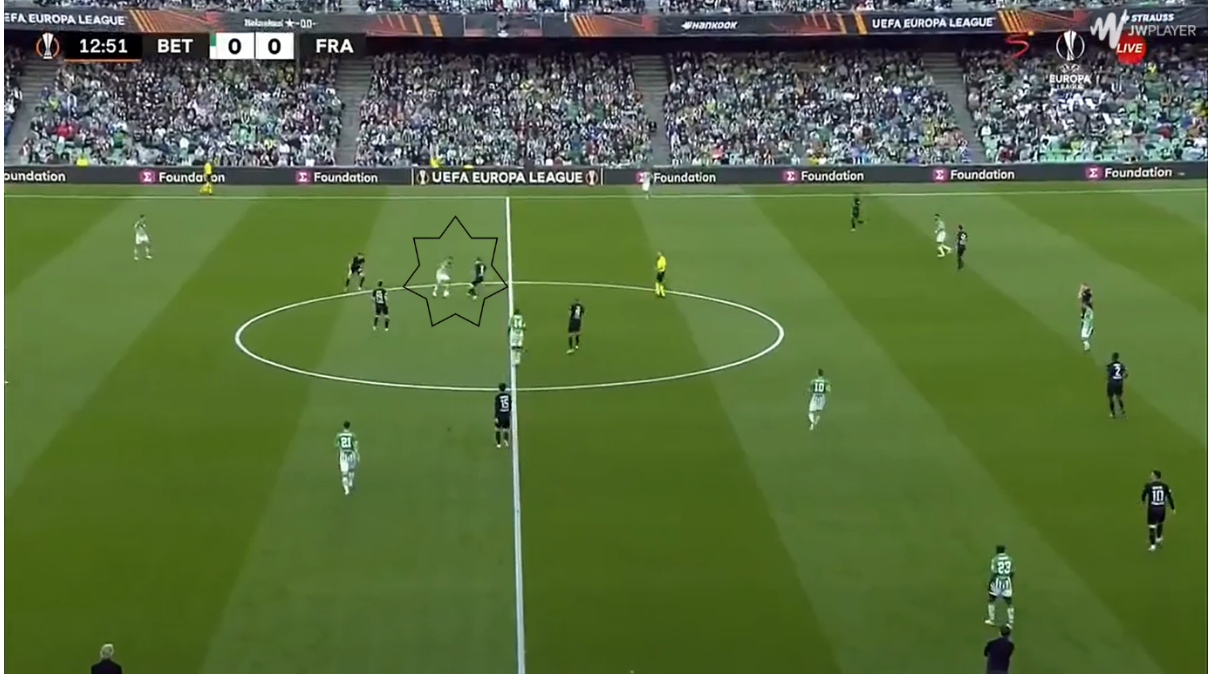 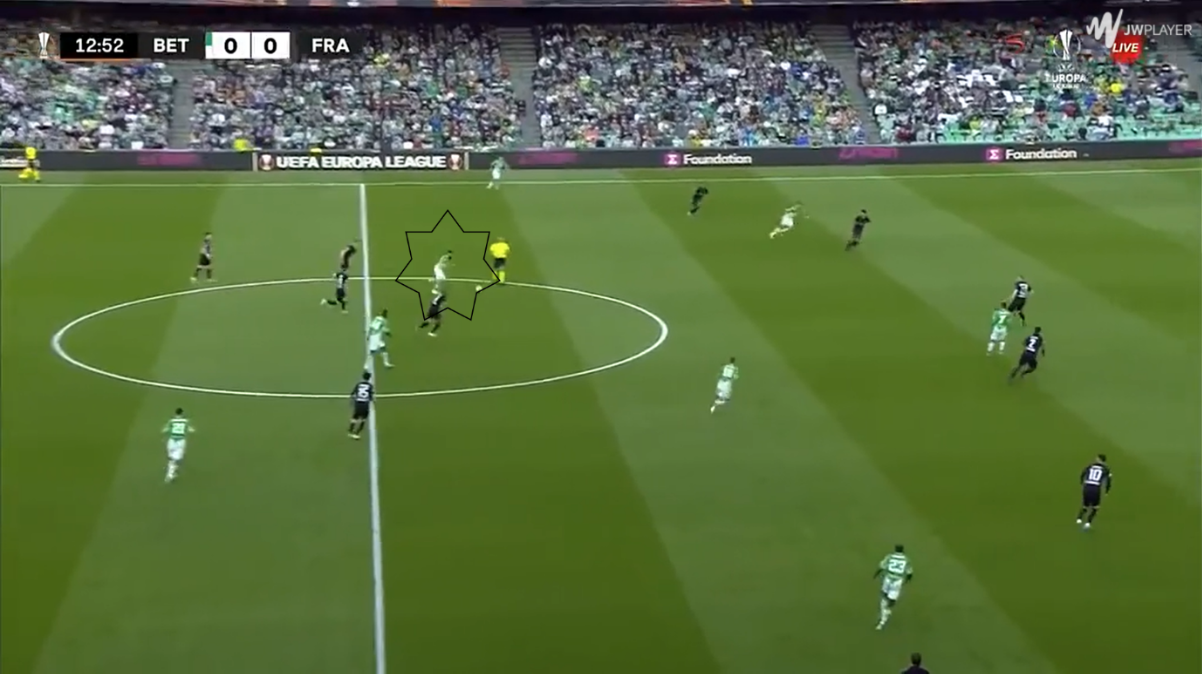 Moving on, Fekir is great with his attacking passes as he makes 3.78 key passes each game (94th percentile) and 3.78 passes into the final third per game (91st percentile). This is impressive as it shows how important he is for the team’s attack.

Moreover, he creates 5.29 shot-creating actions per game, being in the 96th percentile which is very good as these are “The two offensive actions directly leading to a shot, such as passes, dribbles and drawing fouls” according to FBREF.com.

Once again, it proves how he can be on the ball and have his head up to look for opportunities. Moreover, it shows his above-average vision to be able to find the passes in the first place.

In order to analyse his key passes, we will look at the sequence below. In the first image, he has found space in between the lines with no opponent around him. 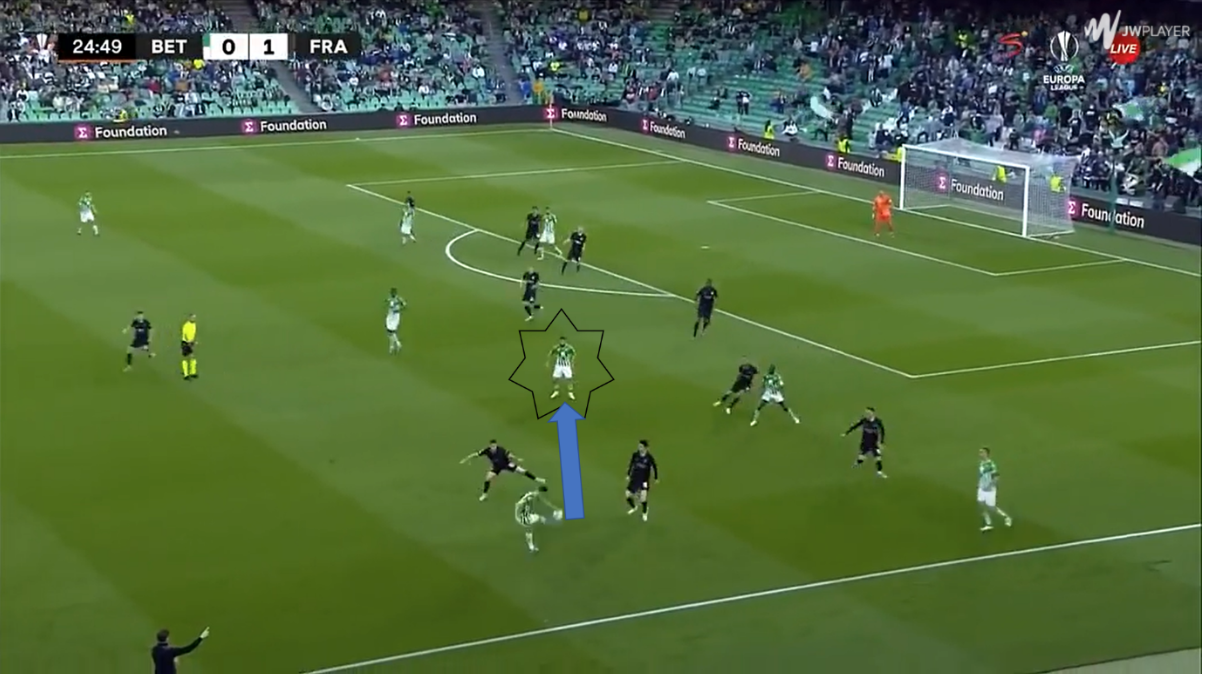 He receives the ball, quickly turns and provides a great pass for the running left-back, behind the opponent’s defence. In such a short timeframe, he has managed to create a dangerous action with a magnificent pass, showing the facility he has for this. 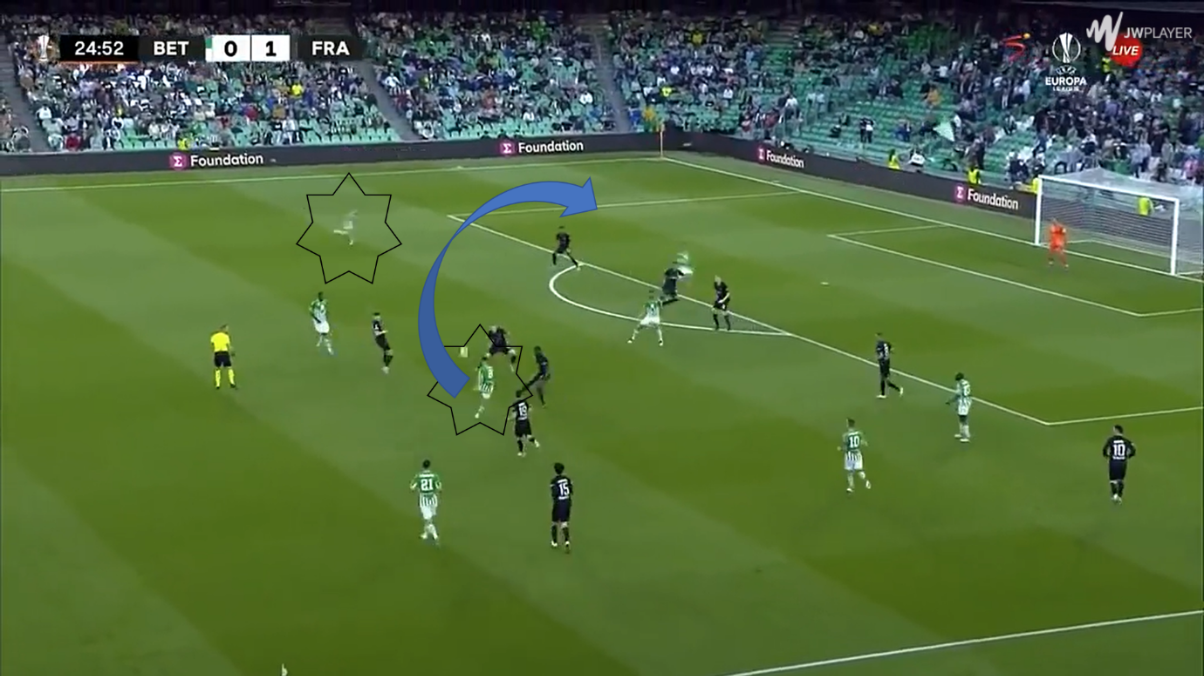 For his passes into the final third, the image below gives a perfect example, where the left-back is making a run and he is badly defended. This gives Fekir the chance to make a through ball for the left-back to just concentrate on making a good cross. 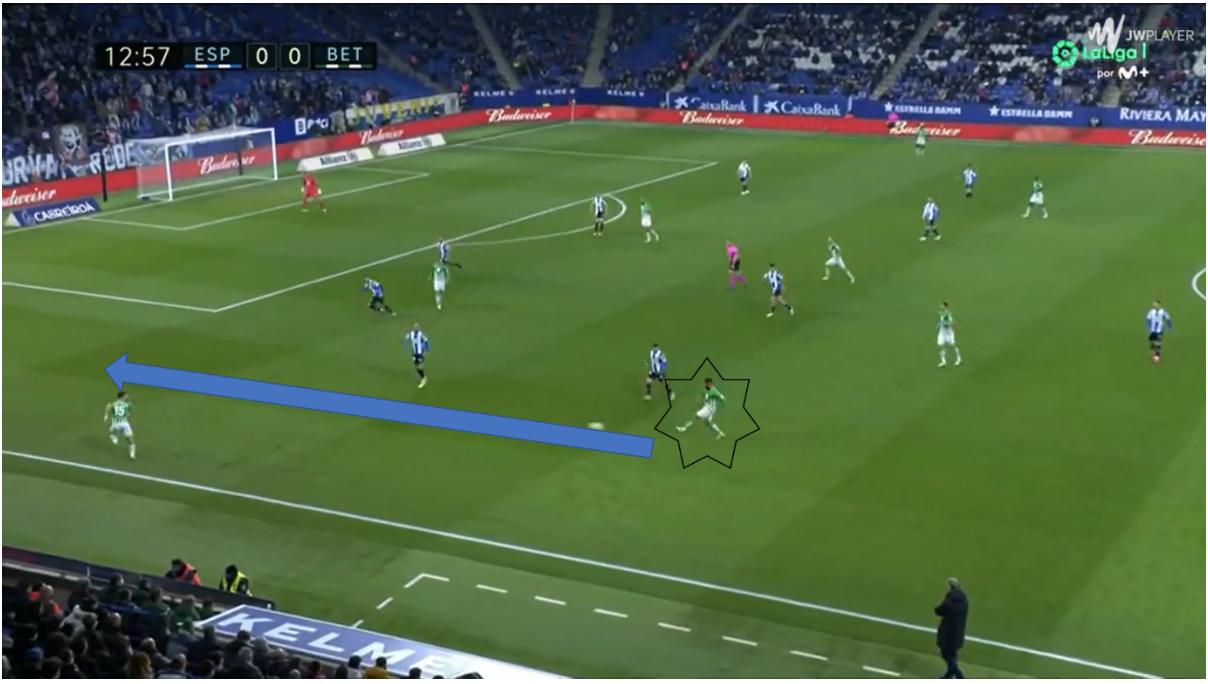 Lastly, Fekir has a good shot, as he has scored 8 goals this season and is one of the free-kick takers for Betis. As well as being able to assist, he also has a goalscoring instinct. The images below prove this, when he was in a 1vs1 situation heading towards goal.

Being left-footed, Fekir feints going to the right and cuts into his left foot, fooling the defender. Having space to shoot, he places it carefully to the keeper’s side, scoring the equaliser for Betis. 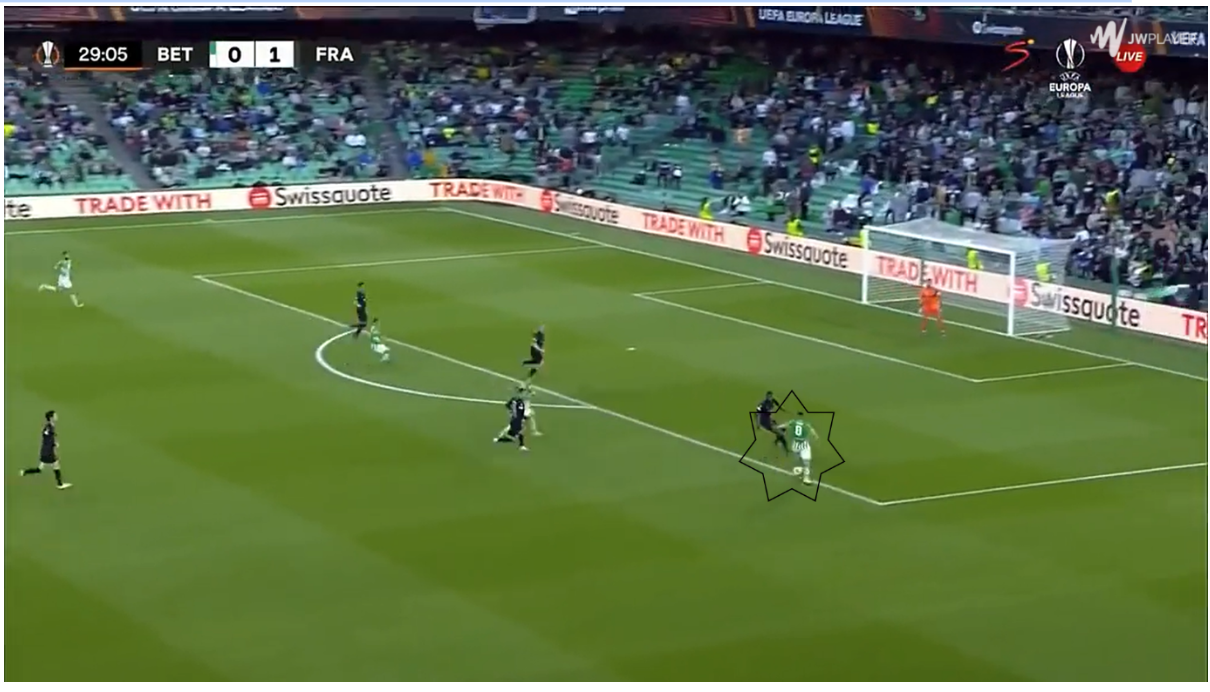 Overall, Nabil Fekir has adapted very well to La Liga, shining for Betis and playing a great season along with his team, winning the Copa del Rey and getting into Europa League again. Through his help in the build-up, holding the ball and dribbling skills, he helps the team progress their plays.

With his playmaking abilities, he causes Betis to create danger and is obviously one of the main protagonists in their attack. Fekir is 28 years old, which means that he still has some years of quality football left. It is clear that he has the level to be playing Champions League football, and he still has the time to do so.