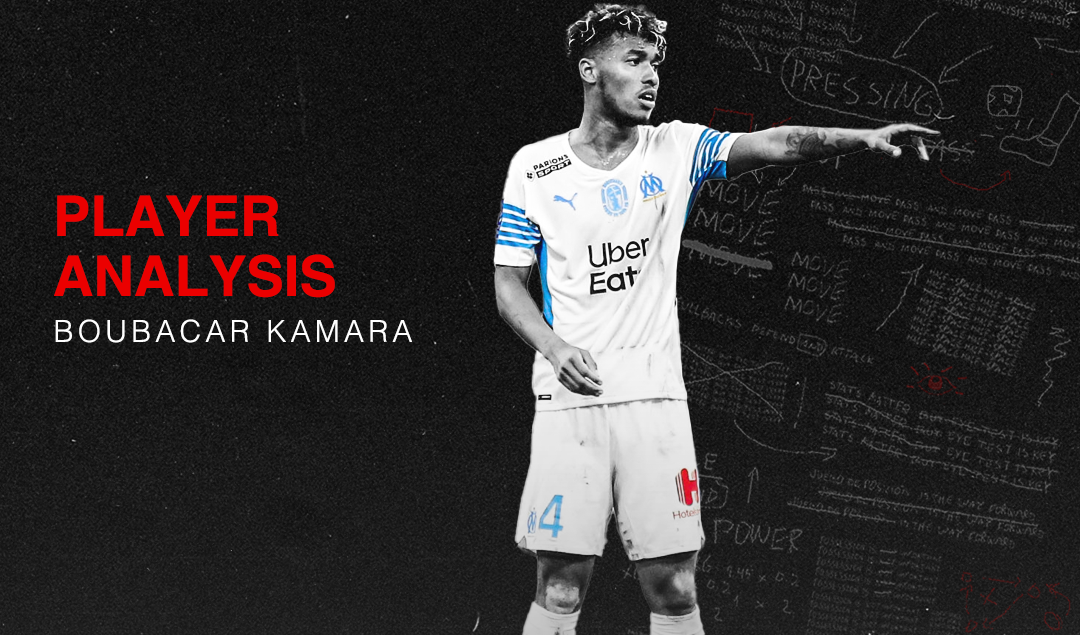 Despite being only 21 years old, Boubacar Kamara is already one of the more experienced heads in the ever-growing class of hugely talented young French midfielders gaining match experience and catching the eye on the European stage.  Having been with Olympique de Marseille, his local club from the age of 5, he made his debut in the Coupe de la Ligue during the 2016/17 season against Sochaux in the round of 16.

The following season was one of being bedded into the team by Rudi Garcia, with appearances in the Europa League group stages and then getting his chance in the final 6 games of the season. Since then, he has cemented himself in the starting XI, playing over 2,000 minutes in the last 3 seasons. Although he initially came through as a centre back, now-departed boss André Villas-Boas played him further forward as a defensive midfielder.

While this may not do his international career many favours with France also stocked to the brim with talented midfielders, Kamara has enjoyed a reasonably successful season and put in performances that have seen him linked with high reputation clubs including PSG, Chelsea and both Manchester clubs. This player profile will look at Boubacar Kamara, discussing his strengths, weaknesses and whether he is ready for such a move. I am going to start by looking at what he is and isn’t good at which should segue nicely into how this contributes to how he plays.

What stands out when watching Kamara is his awareness and positioning. He is constantly scanning his surroundings, ensuring he is aware of all possible dangers around him. This allows him to position himself well enough to cut vertical passing lanes into the opposition striker or advanced midfielder. It’s what allows him to consistently make the right decision of when to push up and press a player or when to drop. And it’s what helps him correctly choose between two players and limit the opposition from progressing the ball quickly.

The data corroborate these observations, with FBRef.com showing Kamara to have an extremely high-pressure success % of 35.1%, placing him in the top 7% of players (albeit off a relatively small 16.67 pressures per 90). This awareness extends to aerial duels too, and despite being 5’10, he wins about 2 of his 3 aerial duels per 90, putting him in the top 8%. He has a fantastic ability to read the flight of the ball and combined with a huge leap and knowledge of how to use his body, helps him beat bigger players in the air.

His awareness helps in both an attacking and defensive sense, so he knows where to position himself to either receive the ball or open a passing lane and what areas to fill in during defensive phases. When Marseille are defending wide areas and the fullback goes out to press, the ball-side centre back will shuffle across with Kamara filling in the middle.

When building from the back, he takes positions behind the first line of pressure to offer a vertical option. If he is being marked by the strikers cover shadow, he moves smartly to manipulate them and help his defenders find somebody else. If the ball does go to him, he is able to play the ball in any direction quickly because he already has a picture in his head of what the playing field looks like thanks to previously scanning.

As a former centre back, you would expect him to be a strong tackler and he does not disappoint in this department. Winning 70% of his tackles, his prowess comes from excellent technique and a strong core rather than long legs which can hook around an opponent and win the ball. He doesn’t take his eye off the ball and times his interventions well to find the opportune moment to cleanly win the ball.

He can go shoulder to shoulder with the ball carrier, using his core strength and strong legs to unbalance them, or nip in quickly to take the ball off their foot. His 42.4% duel success vs players dribbling at him shows his aptitude in this area. Despite being a high-volume tackler, he gives away few fouls and earns fewer yellow cards, only 6 across the whole season.

Kamara actually wins more fouls than he commits, and this stems from his ability to manipulate his body and get himself across his challenger while carrying the ball. With a good first touch, he generally retains the ball well under pressure, able to do so through either a carry or a pass, similar to his compatriot Aurélien Tchouaméni.

Finally, he is a good passer, especially over short and medium distances. He prefers to keep things simple, using short-medium passes to keep things ticking over and shifting the opposition from side to side. He is more than capable of longer-range passes and over the season has added variety to such passes, now able to switch the point of attack with flatter, faster passes. The key theme learnt from these strengths is that a few key technical traits can provide the foundation for several key strengths.

Kamara isn’t the most athletic of players, leading to trouble when against faster players, particularly in open space. Whether it’s a player knocking the ball past him, being done by a 1-2 or keeping up with play as it progresses down the flanks, he can be caught out behind the ball. This isn’t helped by what occasionally appears to be complacency or laziness, where it doesn’t seem like he’s trying to get back as fast as he can.

This point may seem harsh and given the context of the season and the volume of games he’s played in, it may simply be fatigue rather than effort.  His passing off his weak foot is not spectacular either, often being inaccurate or hit with the wrong weight. While not essential, a good weak foot does aid with press resistance in the case he is forced onto his wrong side.

Finally, he’s not a great ball carrier. He receives the ball well and takes a powerful and purposeful first stride. However, his ball control could do with improvement as his third stride typically sees a loose touch or a challenge, and this is where he wins a lot of his fouls. His carrying numbers are both slightly above average for this reason.

Now that we’re clear on Kamara’s strengths and weaknesses, his style of play should become apparent and a logical conclusion. Kamara is a defensive midfielder, watch him and you could probably tell he was a centre-back who was moved forward. He is constantly scanning his surroundings, ensuring he is aware of all possible dangers around him.

He’s like a watchdog, patrolling the private property that is Marseille’s defensive third. If he senses danger, he’ll go and check it out. And if the threat increases, he attacks, snapping into tackles, blocking shots and clearing the ball to stem the attack. Kamara isn’t a flashy player, once the ball is won back, he usually gives it to one of the more creative players like Dimitri Payet, Florian Thauvin, or the fullbacks to get the ball upfield. He is more of a facilitator of progression rather than a progressor himself.

How Dimitri Payet Resurrected France from the Ashes of Terrorism

Looking at his progression numbers for both carries and passes, he makes 3.87 and 4.42 respectively putting him in the 62nd and 43rd percentile. That’s not to say he isn’t capable of threading a ball between the lines because he does have good passing technique, but maybe he isn’t confident in his ability to regularly pull them off. This contributes to a lack of creativity and getting the ball into dangerous areas, meaning slower attacks which are easier for the opposition to defend.

Because he is usually the sole pivot and the protector of the back 4, his conservativism is understandable although it’s an area for improvement.  Kamara is most active in the 1st and 2nd thirds of the pitch, with only 11% of his touches being in the final third. He plays an active role in buildup and occasionally helps with tempo control. As previously mentioned, he will mainly keep the game at a slower pace but when he’s feeling confident, several long balls and line-breaking passes are used to quicken the attack.

At 21 years old and already with almost 8,000 minutes and European experience under his belt, anyone who signs Boubacar Kamara is getting a hugely experienced player and one with plenty of room to develop. Potential suitors will be more than aware of everything outlined in this article but as mentioned above, you can see the technical fundamentals that will be the base for several important skills. He’s a good ball striker, laying the base for both threatening distance shots and long-range passes.

He won’t be going to either the Euros or the U-21 Euros meaning he will have the summer to recharge and work on his accuracy. When he becomes more of a threat to the opposition and someone in need of immediate pressure, this will open space up for his more dangerous teammates. It will also be necessary for him to use this time to become more creative so he can find vertical options faster and get his team into more dangerous zones.

Boubacar Kamara will thrive in any of the top teams in Europe, particularly in teams with strong, well-organised defensive shapes. The quick, transitional nature of the Bundesliga may be too quick for him but I could see him being a more-than-adequate replacement for Saúl of Atlético Madrid who is rumoured to be interested in leaving, the ageing Fernando Reges of Sevilla, Danilo Pereira or Idrissa Gana Gueye at PSG and Marcelo Brozović of Inter Milan, should he be sold to raise funds for the Suning Group.