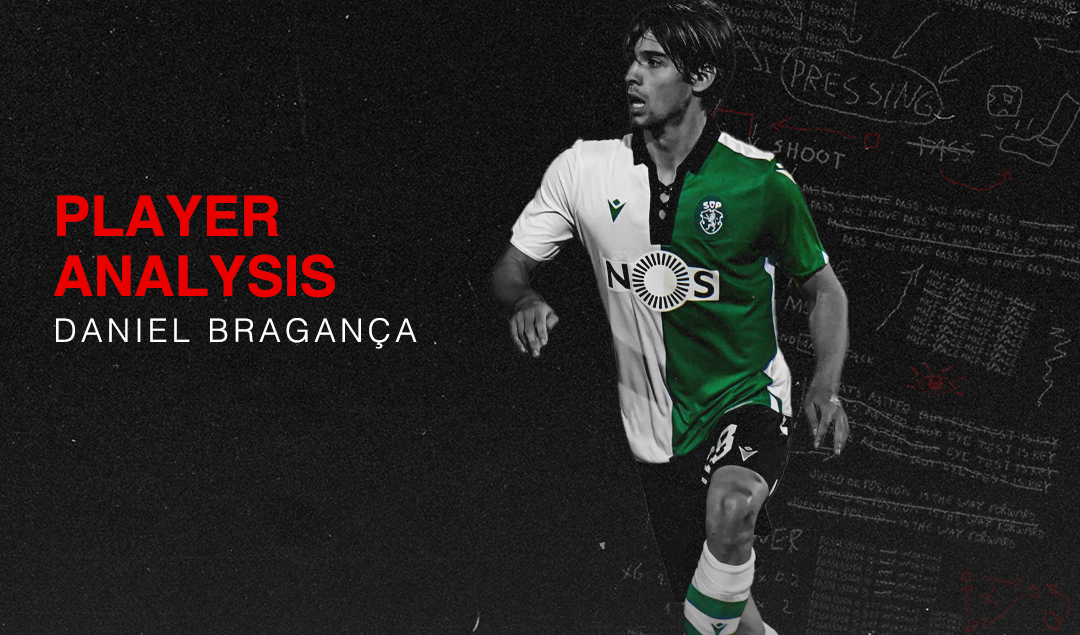 Football is constantly changing, and as time progresses, new concepts and ideas are brought to us. However, some of those ideas never disappear, they just get recycled. Since the ’90s, the football world has changed a lot and many different periods were established. Coaches and teams are able to define a generation and certainly, Pep Guardiola and his Barcelona team changed the way people view football.

Since Barcelona’s golden era, we’ve seen more small and physically meagre midfielders like Xavi Hernández, Luka Modrić and Andrés Iniesta showing up and stealing the show. Now, there is another one of those midfield wizards showing up in Portugal, playing for Sporting, by the name of Daniel Bragança.

Born in Fazendas de Almeirim, Santarém District, Bragança joined Sporting’s academy at a young age and rose up the academy ranks, quickly being viewed as the next wonderkid to emerge from the Alcochete production line. However, despite his obvious potential, he struggled for first-team opportunities and was loaned to LigaPro side Farense in January 2019, and at the end of the season, he was once again sent out on loan to another second-division side, joining Estoril.

Bragança impressed on loan for the Canaries, providing 4 goals and 4 assists in 22 appearances and winning the Best Young Player award of the 2019/20 season. He returned to Sporting in the summer, and instead of heading out on loan to a Primeira side, he was included in the club’s first-team setup, making his debut on September 24 in a UEFA Europa League qualifier against Aberdeen, before coming off the bench and playing 25 minutes in a 2-0 victory against Paços de Ferreira.

The 21-year-old midfielder is one of seven Alcochete graduates to make his debut under Rúben Amorim, along with Gonçalo Inácio, Nuno Mendes, Tiago Tomás, Eduardo Quaresma, Joelson Fernandes and Dário Essugo. Whilst he hasn’t nailed down a starting spot like Mendes or Inácio, he has been an important impact sub and has even started three of Sporting’s last four games, while coming on at halftime on April 11 in a 1-1 draw against Famalicão.

Since taking over as manager on March 4, 2020, Amorim has employed a youth-focused approach in rebuilding Sporting’s squad following the departure of attacking talisman Bruno Fernandes to Manchester United two months prior to his arrival. “Quality has no age,” stated Amorim prior to a Taça da Liga match against Porto. “We are a young team, sprinkled with experience and with a lot to grow, but full of ambition and with an enormous desire to overcome.”

Sporting would go on to edge last year’s finalists in the Taça semis before winning the Final in Leiria against Braga, with Amorim picking up his second consecutive triumph in the tournament after winning with Braga the year before. Whilst Bragança was an unused substitute in the Final, he has skyrocketed in importance during the home stretch of the season. With seven matches left, the Leões currently sit six points clear of Porto in first place.

Bragança is a complete and versatile left-footed midfielder, who is able to play as a defensive midfielder, “8” or even “10.” This season, with Amorim, Sporting mainly plays in a flat 3-4-3 and Bragança has already played in every position in the midfield and has also played as an inside forward or playmaker, alongside Pedro Gonçalves. Standing at 1.69cm or 5”7,’ he doesn’t distinguish for his physical attributes but from his technical capacity and intelligence.

He doesn’t have any major flaws, he is really complete in every aspect of the game and although he isn´t physically strong, he does know how to overcome that and play in a way that those “holes” don’t jeopardize his play. Unfortunately, Bragança hasn’t been a regular starter, having featured in 14 matches, only 2 of them as a starter, which accounts to a little under 400 minutes, so the data available isn’t worth a mention. Therefore, I’ll analyze some of his best traits and some of his major problems and flaws.

Apart from being technically really strong, Bragança also has a really good vision and anticipation, knowing where is going to pass before receiving the ball, which is one of the most important traits when discussing passing.

As shown above, he has a nice range of passing and impressive technical ability, as well as a fantastic first touch. Nevertheless, it is also important for a midfielder to be direct and progressive. Here there are two scenarios to analyze. At the 2021 UEFA European Under-21 Championship group stage, Bragança showed he can be very intelligent and progressive on the ball for Portugal. However, for Sporting, the mental pressure is higher and I assume that is the main cause for him not being as progressive as he can.

He isn’t ultra-conservative nor something similar but he definitely could and maybe should be more progressive. One of his main flaws is his final ball. Although he mainly plays as a defensive midfielder or as an “8,” he has often played alongside Pote as an inverted winger/playmaker. In this position, it’s important to have creativity but also end product and even though it isn’t Bragança’s main position, I particularly don’t see him playing often as a “10” in the future as he lacks some final ball ability and end product.

When scouting a player, especially a midfielder, it is important to evaluate his ability to offer a passing line and also how often he does it. In this area, we have the same situation as above. For Portugal’s U-21 side, he played as a defensive midfielder, in the “Seleção” diamond midfield, and he was really involved in the match, constantly offering passing lanes, either dropping between the center-backs, occupying the full-backs spot or playing between lines.

For Sporting, he isn’t as active but a big part of it is due to him mostly playing in more advanced areas. With that being said, when playing in the midfield there’s usually not much space. I’ve already analyzed his passing and his passing anticipation, knowing exactly what he’ll do before receiving the ball. Now I’ll analyze his press-resistance ability.

Nowadays, when scouting a midfielder, one of the most looked at traits is the ability to evade pressure. However, there are different types of players and not everyone has the technical ability to do so. If we delve deeper into this topic, technical ability isn’t the only aspect to consider, but also the anticipation, body orientation and also the physical aspect, not particularly strength or pace but how resistant a player is to an opposition “touch” and also his balance and acceleration too.

Above, I highlighted his first touch, alongside his body orientation, and that also applies here. There’s always been a pre-conceived idea that small and tiny players weren’t strong defensively and had problems playing in the midfield.

Although Bragança only stands at 1.69cm or 5”7′ and distinguishes himself for his ability with the ball, he is really strong in the defensive assets. He has proved he is strong on defensive duels and also has really good positioning and anticipation, which makes him a really complete midfielder.

Throughout this analysis, I’ve analyzed Bragança’s main qualities but it’s time to take a look at his biggest flaws. He lacks some final ball ability and end product when playing in an advanced position. He also lacks more progressiveness and aggressivity, especially when playing for Sporting.

From what I can see, his biggest problem is his mentality in-game, due to his young age and inexperience. He has the right attitude without the ball but then he tends to play safer with the ball. For Portugal in the U-21 Euros, he showed a lot of confidence and was able to shine, however, for Sporting, he hasn’t been as confident and doesn’t impact the match that much.

Once he’s able to play more regularly and consistently, I believe this small issue will be gone and he will be able to perform better. Last but not least, Bragança is a little too one-footed, “overusing” his left foot, which can make him quite predictable sometimes.

Taking into account everything I analyzed, I believe Daniel Bragança’s best position is as a defensive midfielder. It does suit his abilities better; he has the ball more often and he is also able to impact the match more than as an “8” or “10.” Following the sale of Wendel to Zenit for €20 million + €4 million, Bragança has finally broken into the first team and demonstrated his fantastic talent for his boyhood club.

João Mário is on loan from Inter and although Sporting is negotiating his transfer, if he leaves, Bragança is the man to assume his role and shine alongside João Palhinha. Sporting have a bright, albeit raw talent in their hands, but they to handle him properly to make the best out of him and to help him reach his potential. Whatever the case, expect Bragança to play a crucial role as the Lions close in on their first league title in 19 years.

After topping their group with a perfect record, the Esperanças will be facing off against Italy in the U-21 Euros quarterfinal on May 31. As the same generation that won the U-17 Euros in 2016 and the U-19 Euros in 2018, they will be aiming to complete their trifecta and hoist the trophy in Ljubljana. It’s unclear whether or not Bragança will be a starter for Portugal, having been used as a late substitute in the first group stage match against Croatia, before coming on for Florentino Luís at halftime and leading Portugal to a 2-0 victory over England in the second match.

The third and final match saw Rui Jorge drop Florentino for Bragança, and he rewarded his trust with a brilliant display against Switzerland: 8/8 long balls completed, 10/14 ground duels won, 4 tackles, 4 interceptions, 3 fouls won, 3/4 aerial duels won, 3/3 successful dribbles completed, 110/115 passes completed. With Florentino struggling for minutes at Monaco, the odds are in Bragança’s favor to get the start against Italy.

Overall, Bragança has an extraordinarily high ceiling and very few flaws, and at 21 years of age, the sky is the limit for him. He is a uniquely gifted midfielder with the capacity to play in a variety of positions, and while he may not last long at the Estádio José Alvalade if he keeps up his level of performances, he has the chance to write history with Sporting by helping them end their title drought and achieve greatness.