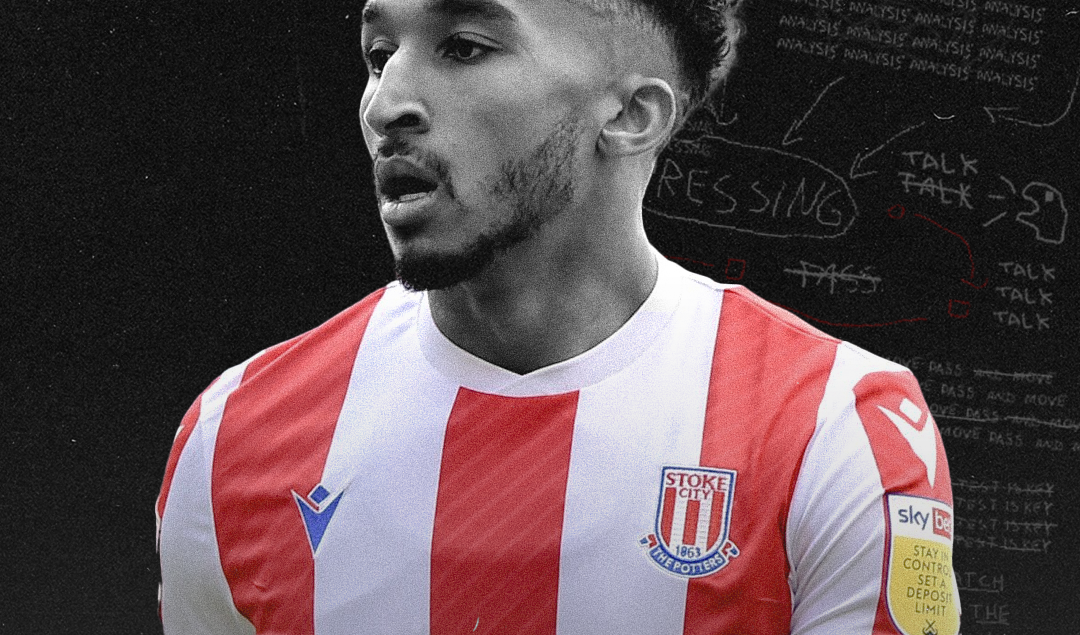 The season just gone has unearthed an unprecedented amount of young attacking talent at the Championship level. Creating a top 10 of second-tier forwards capable of making the step up to the Premier League was easier than ever, but with the spotlight being shared by so many, there are some exciting players who haven’t earned the credit they deserve.

Stoke City’s Jacob Brown falls firmly into that bracket, partly down to the speed with which the likes of Ben Brereton Diaz and Elijah Adebayo among others have emerged and also the disjointed attacking setup he found himself in, but few have improved as significantly as Brown in the past year given their circumstances.

Over the course of the season, the 24-year-old had eight different strike partners when playing in a front two. The player he featured alongside most was Steven Fletcher, but that was in just 11 of his 38 starts. The most games they both started in consecutively was five between October and November.

Similar disruption was suffered by the Potters across the pitch due to injuries and fluctuating form, but Brown was a constant threat to call upon amidst chaos, and he has performed in any attacking role required of him. This could be playing as a wide forward, as the foil for a target man or as a lone striker.

As Stoke manager Michael O’Neill told StokeOnTrentLive in May, “A lot of people would give their right arm to have what Brown has naturally”, and it is his outstanding work ethic and attitude that makes him a manager’s dream.

Having played in midfield during his early years at Guiseley, Brown has gained an element of unselfishness and appreciation of what each player on his team is capable of and how he can aid that in any way. This could be born out of frustration of having to work with lazy strikers who offer little else besides goals, something which every defensive-minded player has experienced at some point in their career.

Finding optimal scoring positions is a key aspect of a forward’s game that Brown has neglected somewhat in previous seasons at the expense of the other dimensions he brings to a team, but in the last year, he has developed a selfish streak that was sorely missed and is very important to reaching the next level.

Brown will go alone and shoot a lot more often when he would have previously waited for backup, but there have only been a couple of occasions where he realises that his agility and balance on the ball can steal him enough space to get a good shot away.

In the below examples, Brown is impatient with the ball at his feet which causes him to rush, and ultimately waste good opportunities.

However, when Brown takes his time, sizes up the defender and takes an extra touch to set himself, it is clear that the control and the shooting quality is there to be used, he just needs more belief in his own ability, which is slowly growing.

The Halifax-born striker scored 13 times in the league last season, averaging 0.31 xGp90 from 2.1 shots, which in comparison to 0.18xGp90 from 1.2 shots the season prior signifies a considerable improvement both in confidence and quality in front of goal.

This is a side of his game that still needs to come out on a more regular basis, because there are times when he is so focused on efficiency in retaining the ball and utilising the strengths of his teammates that he ends up underusing his own qualities and playing the safe option.

The cliched ‘player who always gives a 7/10 performance at least’ can never really be applied to a forward, simply due to the pressure of taking and creating chances, but Brown is the closest example you’ll find.

He’s resolute in pressing the opposition defence, likes making decoy runs, drops deep or wide to help out teammates who are struggling to progress the ball and chases lost causes relentlessly. All in all, he gives off the impression of someone that needs to go home happy with his performance even on a terrible day.

This means that the Scottish international has a play style that is transferable, but he has suffered in part because of constant position and role changes that are out of his control. With that being said, moving forward this will help his versatility a lot and has already brought out facets of his game that weren’t seen as strengths previously.

For instance, Stoke are one of the most cross-heavy teams in the league, left wing-back Josh Tymon produced the third most crosses in the Championship last season (196), and on the opposite flank Tommy Smith was in the league’s top 30 despite playing over 1000 minutes less than Tymon.

Consequently, Brown has had to work hard on his game to cater to this. He reads attacking situations early and his off-the-ball movement is sharp and well-timed to get in front of his man and give himself the best chance of scoring.

This translates well with Brown’s movement on the last man and in behind, but also in picking his moments to make a move or conduct a press rather than running himself into the ground and chasing too many lost causes.

Building an understanding of his own skills and how to use them has been a big step for Brown this campaign, because there is a lot in his repertoire that will be hugely beneficial in a more concrete system where he knows his role.

As the likes of Brennan Johnson, Morgan Gibbs-White and Fabio Carvalho leave the Championship behind for the promised land, Brown’s potential becomes more apparent and the spotlight will no doubt veer towards him as a player to follow in their footsteps in the upcoming season.

Stoke’s other attacking options remain quite dispersed in profile and uncertain in their futures, so now would be a good time for Michael O’Neill to start revolving the Potters’ frontline around Jacob Brown. From there, his self-belief will continue to flow, and with that his scoring form on top of everything else he brings to the team.

Despite that, it is hard to define Brown’s profile, and such dynamism is difficult to place into a specific system. With Tymon on the left and Lewis Baker providing great service from midfield, the Potters aren’t far from the ideal 3-5-2 blueprint. One sustained strike partner for Brown to feed off and their system starts to look a lot more promising.

There are many tangibles that will prove to be the difference between a promotion push and another 14th placed finish for Stoke next season, but Brown will be an asset to rely on irrespective of what goes on around him.

If Stoke can avoid the injuries that plagued them last term, they will be in with a chance. But collective success or stagnation aside, you could bet good money that at his current rate of progression, Brown won’t be far from a Premier League move this time next year.