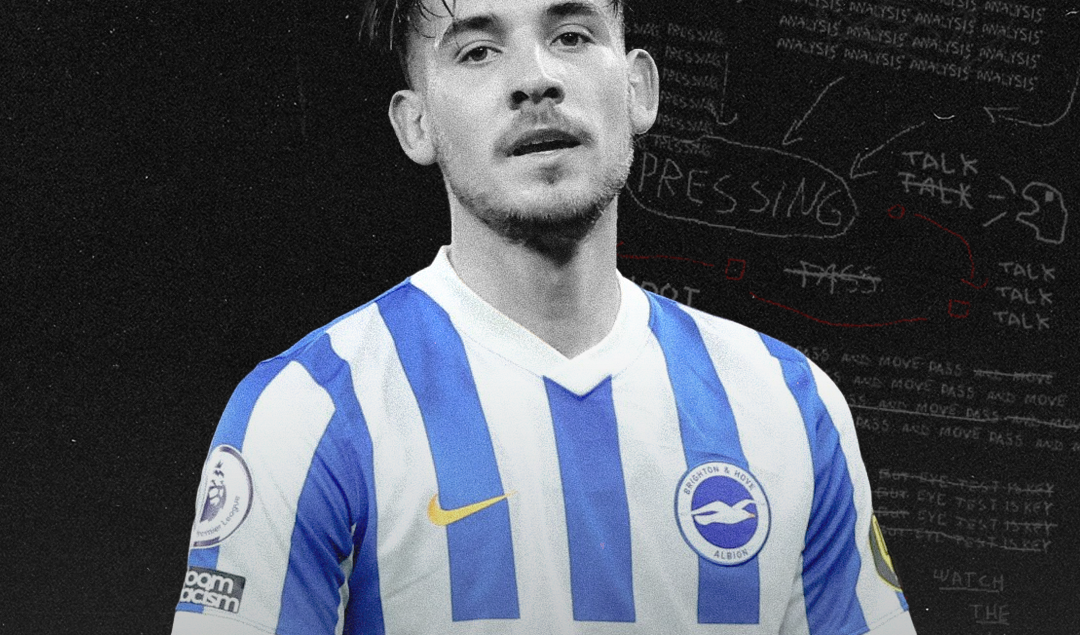 Since ending a 34-year absence from the top-flight in 2017, Brighton & Hove Albion have gained a reputation for being a club that, perhaps more than any other Premier League team, scours the entire world for raw youngsters for bargain prices.

It has reaped benefits, with the likes of Alexis Mac Allister, Leandro Trossard, Tariq Lamptey and Marc Cucurella impressing for the Seagulls.

One of these players is Jakub Moder, who, at 22 years of age, has become a vital player for Graham Potter’s Brighton.

Born in Szczecinek, Poland, Moder joined Lech Poznán’s academy in 2014 and progressed through the ranks before earning a move to Brighton on October 6, 2020 for £6 million.

He was immediately loaned back to the Polish side, but after their elimination from the UEFA Europa League, his loan was cut short.

Moder made his debut for Brighton on February 10, 2021, playing the full 90 minutes in a 1-0 away defeat to Leicester City in the FA Cup, and he would make his Premier League debut on February 27 in a brief cameo against West Brom. However, it wouldn’t be until March 20 that Moder was entrusted with a start in the league.

Starting in a left wingback position in Potter’s 3-4-1-2, Brighton thrashed Newcastle 3-0 to open up some breathing room in their relegation fight.

Moder headed off for international duty and started in a 3-3 draw against Hungary, before starting and grabbing an assist in a 2-1 defeat to England.

The Polish youngster became a regular starter over the final weeks of the season as Brighton finished 16th, albeit 13 points above the relegation zone.

Moder came off the bench for Poland’s European Championship opener against Slovakia and started in a 1-1 draw against Spain, but missed the final game due to a knee injury as Paulo Sousa’s side were defeated 3-2 by Sweden.

He started the 2021/22 Premier League campaign on the bench as James Tarkowski put Burnley up within a matter of minutes, but after coming on as a second-half substitute for Steven Alzate, he needed just a few seconds before setting up Neal Maupay for the equalizer. Five minutes later, Brighton took the lead via Alexis Mac Allister and held on for a 2-1 win.

Whether playing as a starter or a substitute, the 22-year-old has been a vital component for Brighton, registering two goals and four assists in 28 appearances.

He ranks in the 98th percentile amongst attacking midfielders / wingers in Europe’s top 5 leagues for touches in the attacking penalty area with 3.66 per 90, and sits pretty at 1.67 shots per 90 (90th percentile) and 4.6 progressive passes received per 90 (93rd).

However, perhaps the most intriguing asset of his game is his ability to combine his physicality (Moder stands 1.91 meters tall) with an excellent reading of spaces, a shrewd movement and the timing to start his runs.

In a team that seeks to dominate possession, where space is often hard to come by, Moder’s ability to read the opponents and time his runs to perfection is absolutely essential for Brighton. We can see an example of this in the club’s 1-1 draw against Crystal Palace last month. 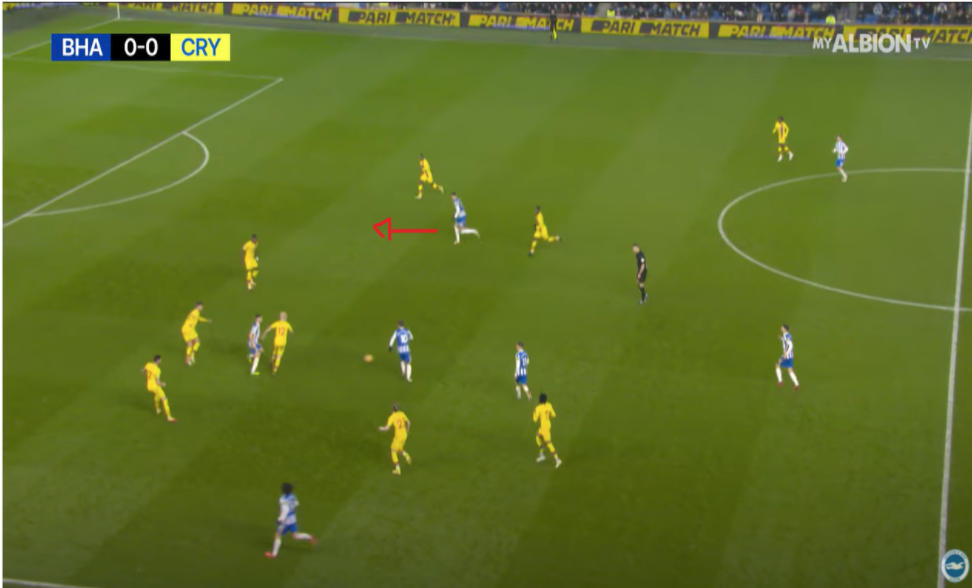 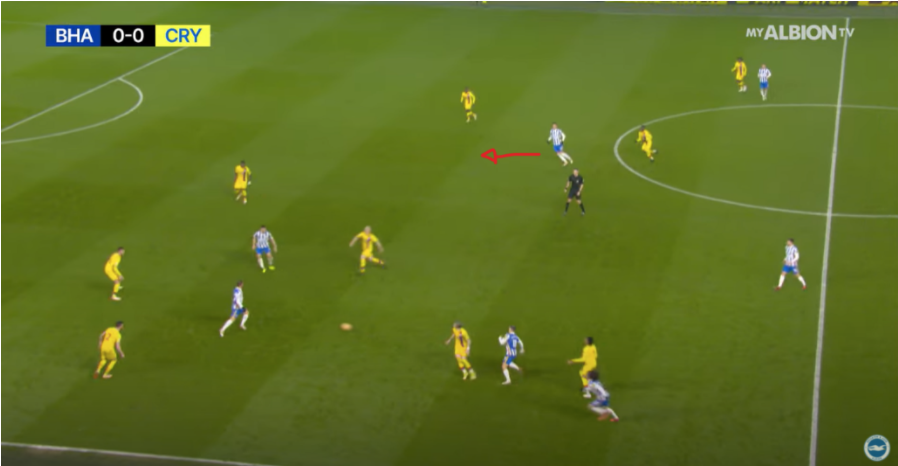 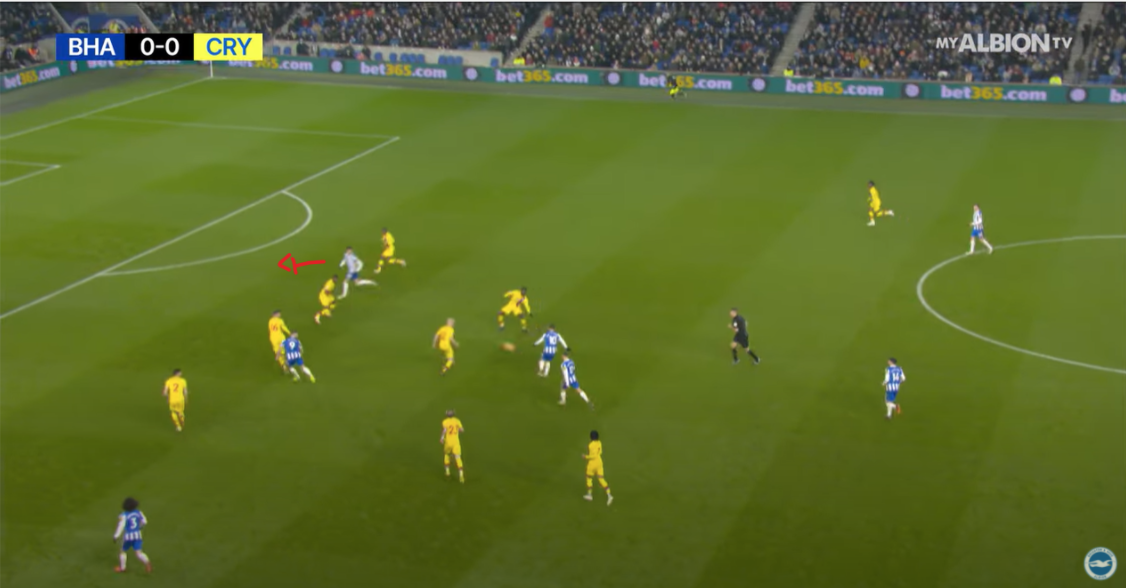 Moder has already begun his run on the last shoulder of the Palace defense when Trossard’s pass reaches Mac Allister. He gains a foot up on Jeffrey Schlupp and is able to take advantage not just due to his timing of his run, but because of his body positioning as well to exploit the backline.

Whilst it did not result in a goal, it is little surprise that Moder is averaging a non penalty expected goals tally of 0.14 per 90, putting him in the 88th percentile amongst wingers and attacking midfielders.

In Brighton’s recent 2-0 victory at Watford, Moder makes a brilliant movement to enter the box right when Lamptey is making the cross. Whilst Danny Welbeck and Neal Maupay make runs towards the penalty spot, Moder moves towards the edge of the box to provide the option for a lay-off pass.

In doing so, Moder is able to draw the attention of Samir, who is pulled out of position. Maupay is able to pull away and receive Lamptey’s cross whilst unmarked, with the Frenchman pulling off a superb half-volley from 14 yards out. Brighton would go on to win 2-0 thanks to a late goal from Adam Webster. 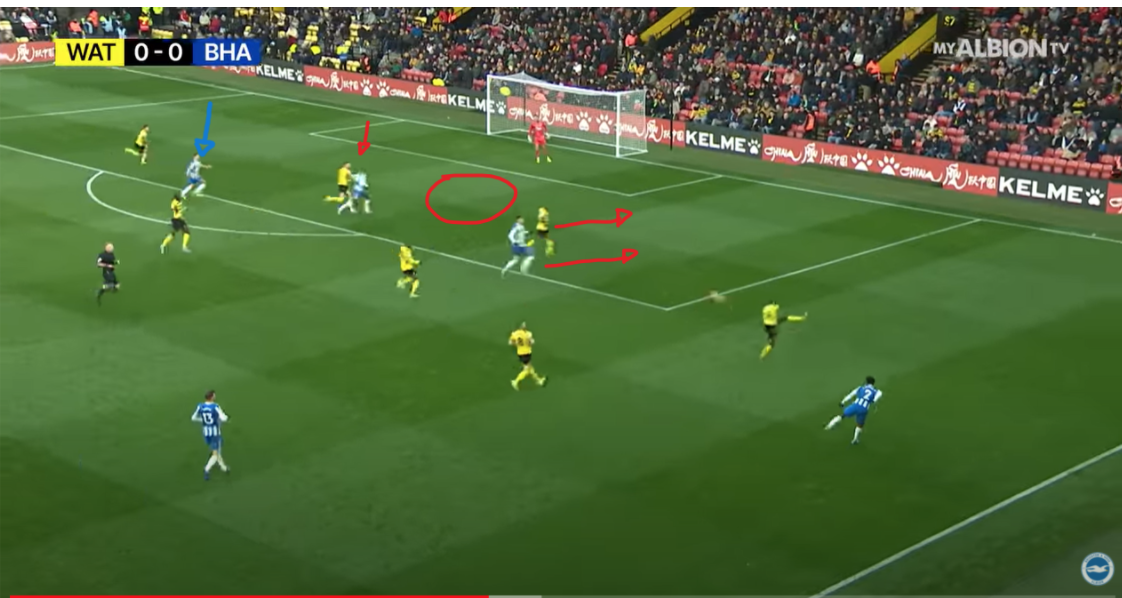 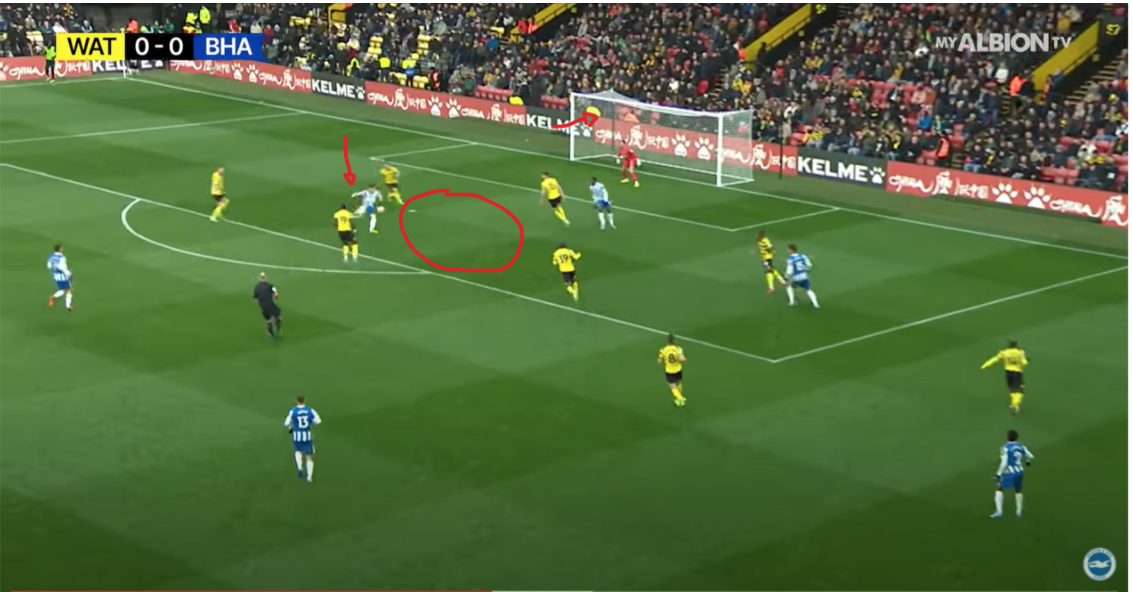 Moder’s Premier League debut came on February 27, 2021 in a 1-0 defeat to soon-to-be-relegated West Bromwich Albion. With Kyle Bartley giving Sam Allardyce’s side an early lead, Potter subbed off Ben White for Moder in the 83rd minute.

Nearly a year later, Brighton returned to The Hawthorns to face off against West Brom in an FA Cup fixture on January 8. West Brom opened the scoring after halftime via Callum Robinson but went down to 10 men soon after when Cédric Kipé picked up a second booking.

Brighton equalized in the 81st minute via a goal from Moder, before going on to defeat West Brom 2-1 in extra time thanks to a goal from Maupay. Let’s take a look at the first two frames of the equalizer: Moder isn’t even in the picture.

Dan Burn, who would return to Newcastle at the end of the month following a successful spell at the Amex, rolls the ball out for Marc Cucurella, whose pass to Maupay sees the French striker deftly perform a one-toouch dummy into 17-year-old striker Evan Ferguson.

Ferguson takes a heavy first touch that evades both him and West Brom defender Conor Townsend, setting up Moder to rush into the edge of the box and take a touch before curling in a magnifcient shot to beat David Button at his near post. 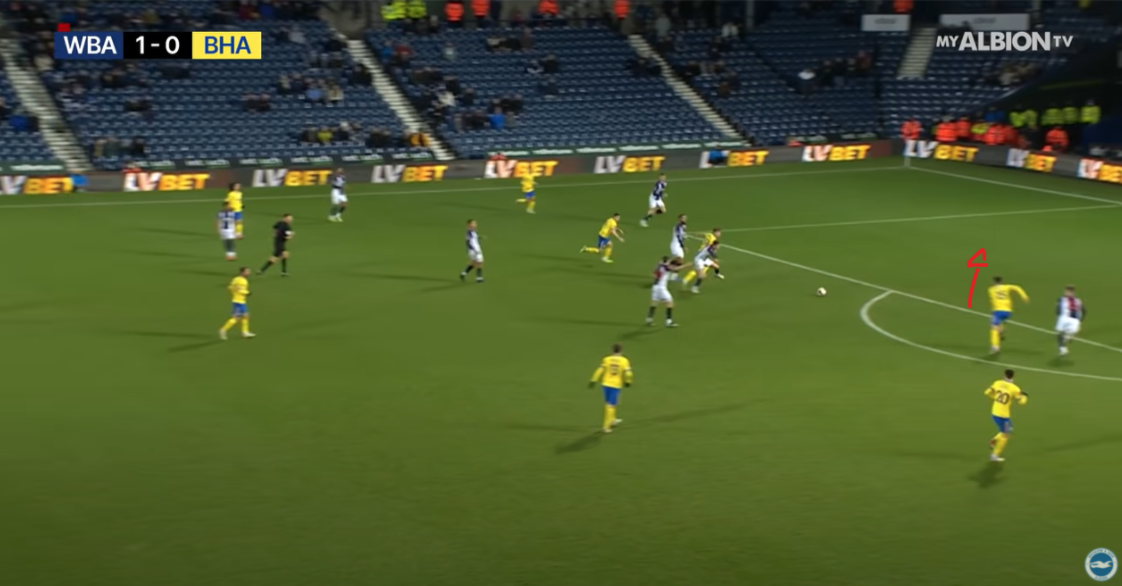 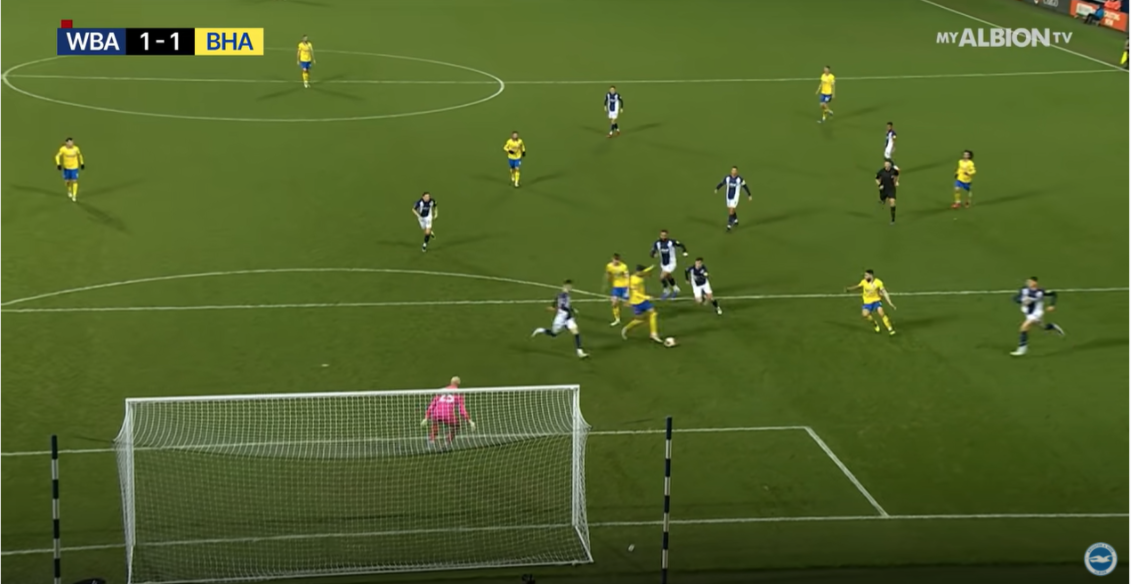 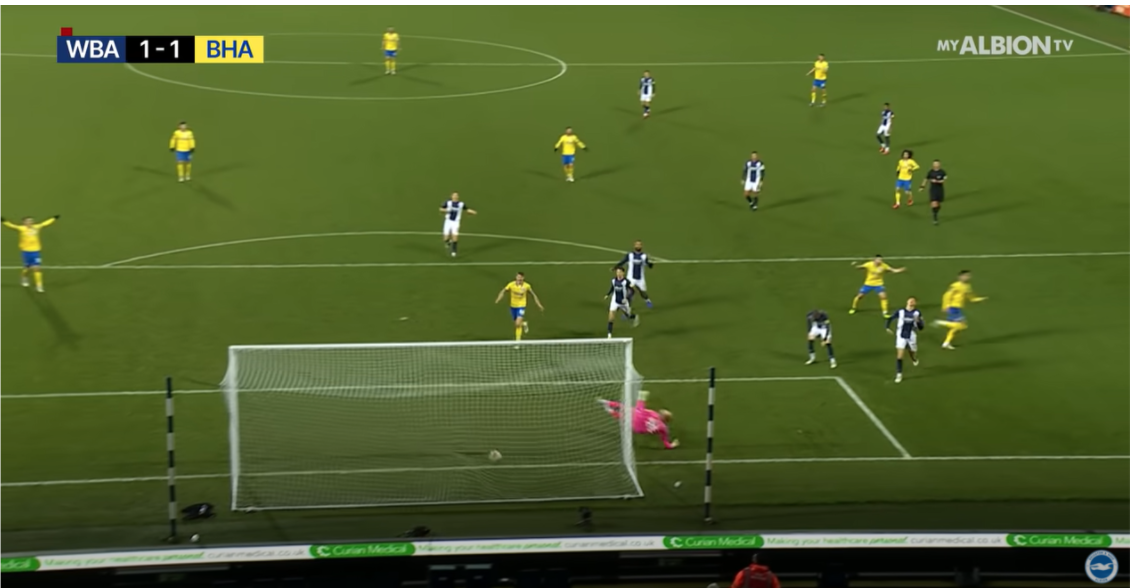 After spurring Brighton to victory against Watford, Brighton lost 2-0 at Old Trafford as a Portuguese goal show of Cristiano Ronaldo and Bruno Fernandes condemned the 10-men side to defeat. Moder was able to threaten United’s defense on various occasions but was unable to add to his goal tally against Ralf Rangnick’s men. 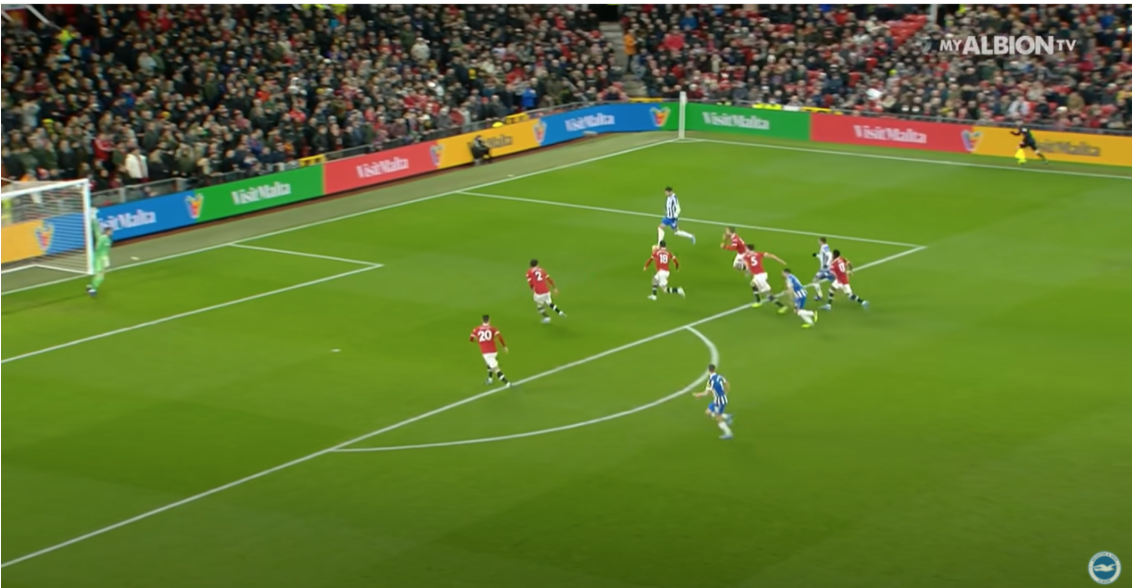 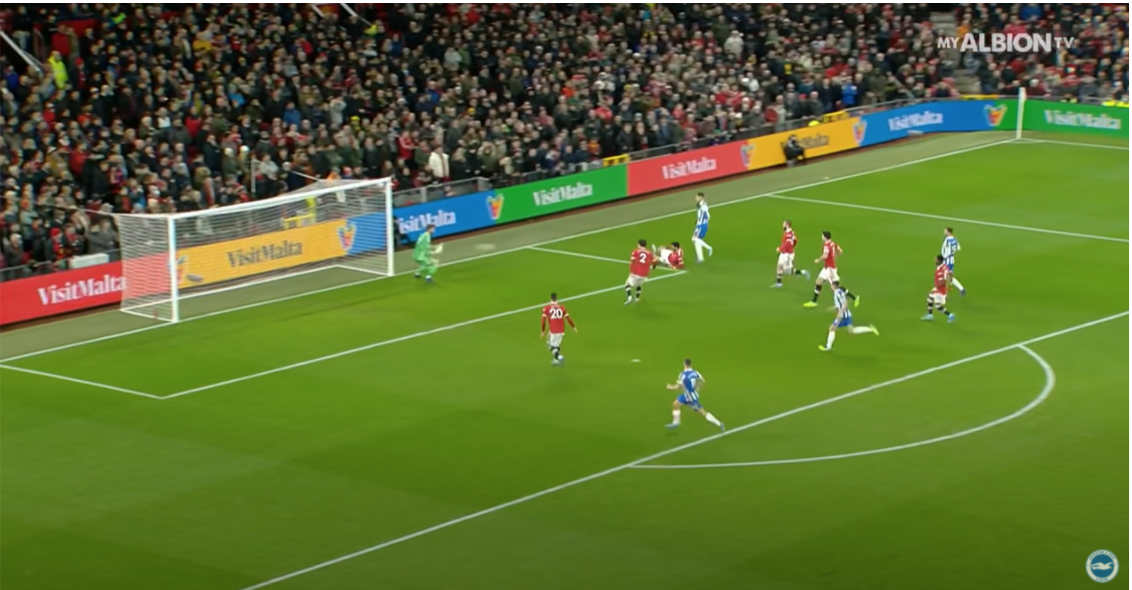 Since returning to the top-flight in 2017, Brighton have finished no higher than 15th; they currently sit ninth in the table. The Seagulls are entering unprecedented heights under Graham Potter and one of the biggest catalysts has been Jakub Moder, who, at 22 years old, could become a crucial leader for Brighton and Poland in the decade to come.