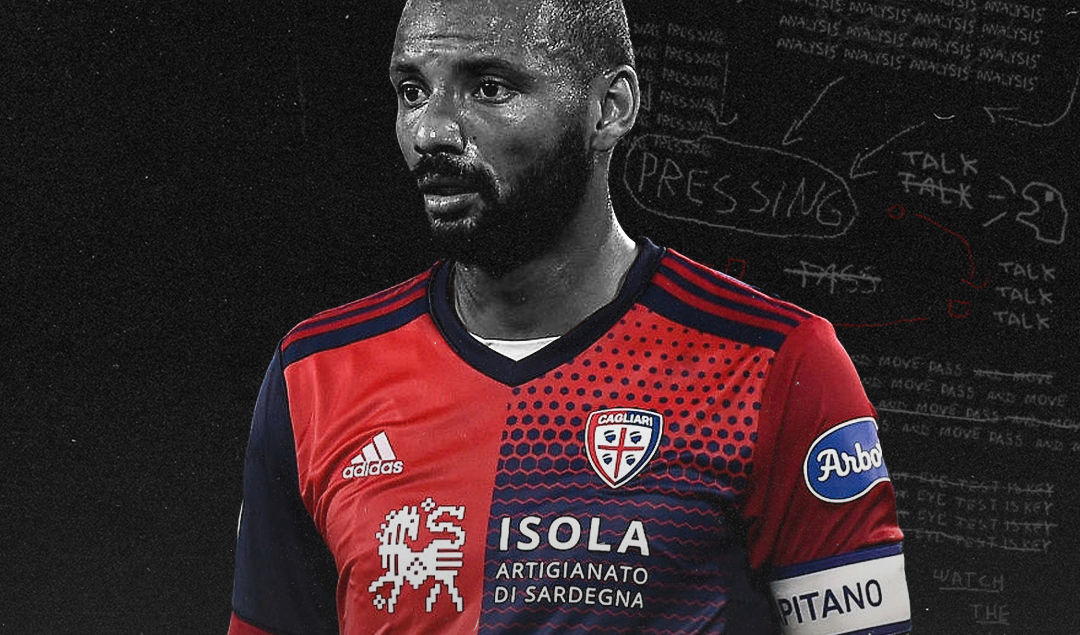 Cagliari is a team that holds a unique place in the history of Italian football. The club from the island of Sardinia is the only team not from the mainland of Italy to have won the Serie A title, accomplishing that achievement in the 1969/70 season.

Undoubtedly the talisman of that iconic squad was star striker Luigi Riva, who is Italy’s all-time goalscorer with 35 goals in 42 international matches, and he also has the most Serie A goals for Cagliari with 156. The player who is second on the latter list does not have the legendary status of Riva or have the high profile of other Isolani stars of the past but he is carving out his own piece of history with I Sardi.

João Pedro Geraldino dos Santos Galvão, or João Pedro for short, has been with Cagliari since 2014 and he discovered the career stability that he could not find at his previous clubs. After Week 7 of the 2021/22 Serie A season, the Brazilian has found the back of the net 62 times in the Italian league in 187 games.

For the 29-year-old from Ipatinga in the state of Minas Gerais in Brazil, things looked promising early on. He had represented his country at Under-17 level at the South American U-17 Championship as well as the FIFA U-17 World Cup in 2009, playing alongside future senior internationals like Neymar, Casemiro, Alisson, and Philippe Coutinho.

In the following year, he made his senior debut for Atletico Mineiro under former Palmeiras, Real Madrid, and Brazil coach Vanderlei Luxemburgo, and he featured in 11 Brazilian Série A matches as well as two Copa Sudamericana games.

“I really want to see how to position João Pedro,” Luxemburgo told Mediagol.it in August 2010. “At times I have tried him in midfield, others as a striker. With him, I am experimenting. He is a very fast player and I can fit him into both positions.”

Shortly after that, he was purchased by Italian club Palermo for a reported fee of €2.5 million, but playing opportunities were limited. He had played four times in the senior squad and five matches for the Primavera team before being sent on loan to Portuguese club Vitória Guimarães in January 2011. It proved to be an ill-fated spell for the Brazilian midfielder, who played six Primeira Liga matches before he had his loan terminated by the club in April that year after reacting poorly to a substitution.

João Pedro had been replaced for Edgar Silva after just 28 minutes in a 1-1 draw against Sporting CP and he had kicked a ball in disgust. He was walking to the dressing room but he was ordered to return to the bench by Vitória Guimarães vice-president Paulo Pereira. The Brazilian kept on arguing with Pereira before Coach Manuel Machado intervened.

After that sojourn in Portugal, the Brazilian returned to South America, and he was sent on loan to Uruguayan giants Peñarol in August 2011, where he scored six goals and provided five assists in 13 Primera División Apertura matches. Surprisingly, he only played twice in the Clausura, but he managed to feature in eight Copa Libertadores matches.

In the summer of 2012, he rescinded his contract with Palermo, and he was signed by Desportivo Brasil but then sent on loan to Santos, which had contained a young Neymar, and two future Italian Serie A players in Felipe Anderson and Bruno Peres. João Pedro was limited to 10 league appearances though and started just once.

If his spell with the Brazilian giants was another time to forget, the tide would slowly turn for the better in the 2013/14 season. He would return to Portugal and join Estoril Praia, where he would go to play 44 times in competitive fixtures. Operating in a variety of attacking roles, João Pedro scored eight times and supplied four assists in 24 Primeira Liga matches, and he also made eight appearances in the Europa League including two games in the qualifying rounds.

Six Footballers Flying Under the Radar

Estoril Praia signed him on a permanent deal from Desportivo Brasil for an undisclosed fee in July 2014 but Italian club Cagliari purchased him in a swap deal with Uruguayan midfielder Matías Cabrera in September. It was the first year of Tommaso Giulini as Isolani president after he had acquired the club from Massimo Cellino and Zdenek Zeman was appointed as coach.

Operating as a mezzala sinistra or left-sided midfielder in Zeman’s 4-3-3 formation, João Pedro encountered difficulty adapting to the methods of the maverick Czech tactician and his playing time became increasingly limited.

After Zeman was sacked and replaced by Gianfranco Zola, the Brazilian gained more playing time and played as an attacking midfielder. His performances improved, and even when Zola was sacked and Zeman was reinstated, he kept his place in the team.

The Czech coach resigned after five rounds and he was replaced by Gianluca Festa but it was clear that João Pedro had to start. Unfortunately, he could not prevent Cagliari’s relegation to Serie B, and it finished the 2014/15 Serie A in 18th place, three points from safety.

Despite his early struggles, the Brazilian made 29 league appearances, found the back of the net on five occasions, and provided a couple of assists. Giulini hired Massimo Rastelli as coach for the 2015/16 campaign in Serie B, and he gave João Pedro the opportunity to become a protagonist for I Sardi, which he did not squander.

Operating as an attacking midfielder in the 4-3-1-2 formation behind strikers Diego Farias and Federico Melchiorri, he went on to make 38 appearances in the Cadetti, scored 13 goals and provided seven assists as Cagliari would go on to finish on top of the table with 83 points.

Cagliari would have a decent return to Serie A under Rastelli, finishing 11th on the table with 47 points. The Isolani were involved in some exciting matches and scored 55 goals throughout the 2016/17 season, but the defense was leaky and they conceded 76 times.

João Pedro had a difficult start to the season, suffering a hamstring injury, then a fractured leg, and he also served a three-match suspension after committing a cynical foul on future Sardi teammate Kevin Strootman in the Sardinian club’s 1-0 defeat away to Roma. He would finish the season more positively, ending with seven goals and three assists in 22 league games.

The Brazilian would also make 22 appearances in the 2017/18 Serie A season but his season would be cut short in disappointing circumstances. Massimo Rastelli was replaced by Uruguayan Diego López as coach after eight rounds and João Pedro was awarded the captaincy on a number of occasions by both coaches.

He would earn a four-match ban after deliberately stomping on one of the feet of Fiorentina winger Federico Chiesa in the 1-0 defeat at home to the Viola and then he was suspended in March 2018 after a drug test taken after a 0-0 draw revealed that he had taken a banned diuretic called hydrochlorothiazide. CONI’s anti-doping tribunal requested a suspension of four years for João Pedro but the final ruling in May announced that he would be banned for six months.

The Brazilian also missed the first three rounds of the 2018/19 Serie A season and he found another coach on return. Former Catania and Chievo tactician Rolando Maran implemented the 4-3-1-2 formation and kept the Brazilian behind the strikers. He would score seven goals in the 34 matches but the best was yet to come.

For the 2019/20 season, with the arrival of Radja Nainggolan on loan from Inter, João Pedro was converted into a support striker while the Belgian played in the hole. Cagliari had an incredible start to the season, playing modern, fast, intense, and direct football, and it was as high as fourth in December.

Any hopes of an unlikely Champions League appearance dissipated and the Isolani had gone winless from early December to early March in 2020, which resulted in Maran being sacked and replaced by Walter Zenga. Zenga would not start coaching until June due to the first wave of COVID-19 and the Sardinians finished equal 13th with Udinese on 45 points.

On an individual level, it was a successful season for João Pedro, finishing the season with 18 goals in 36 Serie A games and he also provided four assists. The 2020/21 Serie A season was one of struggle for the Isolani under Eusebio Di Francesco, who had dragged the club into the relegation zone. Former SPAL coach Leonardo Semplici replaced him after 23 rounds and I Sardi finished equal 16th with Torino on 37 points.

Once again, the goals of João Pedro were decisive as he went on the play all but one league game and he found the back of the net on 16 occasions. After seven rounds in 2021/22, the Brazilian has scored four goals and supplied two assists, but the Isolani have not won a match yet and Semplici was replaced as coach by Walter Mazzarri. More magic from the Brazilian forward might be required to achieve another great escape.

In addition to becoming the second-highest goalscorer for Cagliari in Serie A, he is now the sixth-highest Brazilian in the Italian league, also surpassing the great Ronaldo or “El Fenomeno”.

“I became the sixth Brazilian with the most goals in Serie A, it is something that will remain in history,” João Pedro said in August on Videolina and Radiolina. “I have now overtaken Ronaldo “Il Fenomeno”, even though he has played far fewer games than me. But my name will remain in the annals and this can only fill me with satisfaction.”

João Pedro may not have the makings of a Seleção international, there have been moments in which he has had excessive tantrums, and he served a drug ban. His goals for Cagliari though have turned him into an unlikely hero at the Sardinian club though and become a talisman that the fans have longed for.