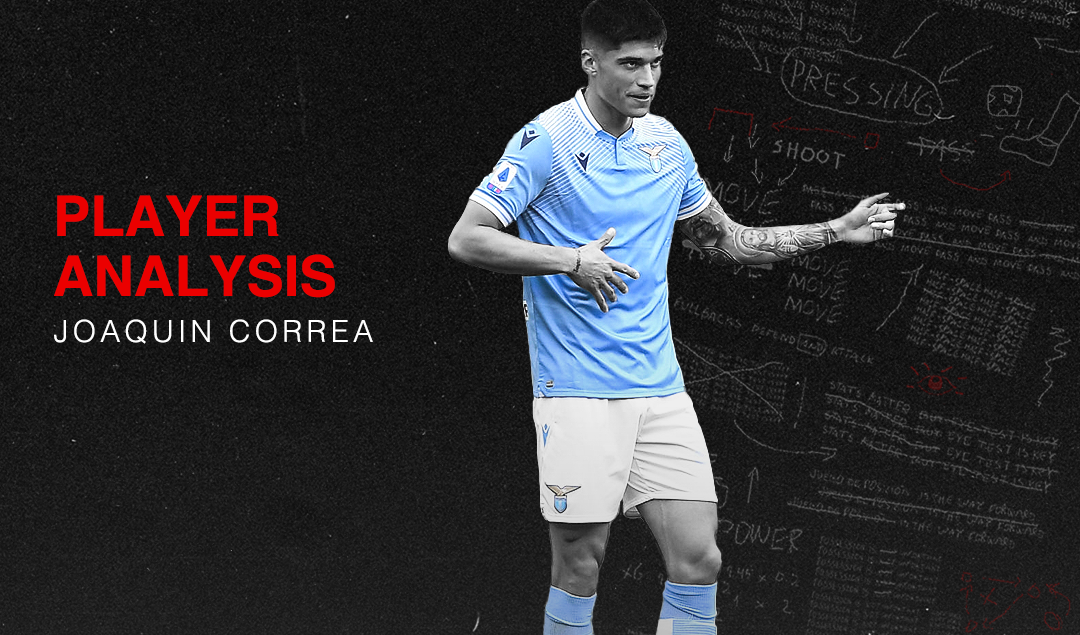 During his time as coach of Lazio, Simone Inzaghi has demonstrated the ability to get the best out of the players at his disposal as well as improve their skills. Since he was appointed as head coach of the Aquile in the summer of 2016, the former striker has been able to integrate players into his preferred 3-5-2 formation. While Ciro Immobile has become one of the most prolific strikers in the club’s history, he has had a few different partners in attack.

Keita Baldé Diao played alongside the Italian international in the 2016/17 season and then Luis Alberto would play behind the Azzurri forward in the following campaign. From the 2018/19 season onwards, Immobile has been paired with Joaquín Correa and the Argentinian attacker has settled into the team as a support striker.

Known as “El Tucu” because he originates from the Tucumán province in Argentina, Correa had his inconsistencies when he first played in Serie A with Sampdoria and then in La Liga with Sevilla, but he has become a more influential figure in matches since joining Lazio. The 26-year-old is experiencing a purple patch in Serie A, scoring five goals and providing an assist in his last five league appearances. With eight goals in 26 appearances so far in 2020/21, he has three matches left to reach double figures for the first time in his professional career.

Correa has had some injury problems this season, especially a calf injury in the middle of the campaign, but he has shaken off those woes and been in scintillating form. The Argentine had earned two yellow cards in Lazio’s 2-1 victory at home to Spezia in Week 29 of the 2020/21 Serie A season, which meant that he did not feature in the Biancocelesti’s away win to Hellas Verona in the following round.

For the Week 31 match against Benevento, Inzaghi brought Correa back into the starting line-up and partnered Immobile in attack. Both forwards played a starring role against the Stregoni and Lazio won 5-3 thanks to the Italian scoring a brace and the Argentine also found the back of the net. A Fabio Depaoli own goal and an Immobile strike gave the Aquile a 2-0 lead inside 20 minutes, then Correa added the third in the 36th minute from the penalty spot after he earned the spot-kick.

Immobile had played a through-ball for “Tucu” to run onto and the South American attempted to chip the ball over Benevento goalkeeper Lorenzo Montipò. As the shot-stopper made the fingertip save, he tripped the Lazio forward as he followed through, and the 26-year-old then sent his penalty low to Montipò’s left. Correa played a major part in the Biancocelesti fourth goal against the Sanniti and his understanding with Immobile was illustrated again.

The Italian striker was running down the left flank and he noticed the run of the Argentinian international. Correa ran onto the pass, dribbled past Stregoni defender Kamil Glik, and put the ball in between the legs of Montipò for an own goal. Although Immobile is the out-and-out striker in the Biancocelesti squad, he showed the ability to play well-weighted to his teammates, and Correa used his speed and intelligence to make the right runs.

The Argentine played the full 90 minutes against Napoli but the Aquile succumbed to a 5-2 defeat to Partenopei in a night to forget for the club from the Italian capital. When they returned to Rome to face AC Milan, “Tucu” made the game his own. Both teams needed the points to stay in the battle for a UEFA Champions League spot, and Lazio was victorious, claiming a 3-0 victory. Correa scored twice before Immobile added the third for Inzaghi’s side.

The 26-year-old received a pass on the left-wing and his first-time flick was headed down by Rossoneri midfielder Ismaël Bennacer. The Algerian international lost his balance and the ball came straight back to Correa, who then played a one-two with Immobile. “Tucu” proceeded into the penalty area, dribbled past Gianluigi Donnarumma, and slotted the ball in from a tight angle with his left foot.

Six minutes into the second half, Correa doubled the lead for Lazio after running onto a Luis Alberto through-ball, outmaneuvered AC Milan defender Fikayo Tomori, and this time he beat Donnarumma from a tight angle with his right foot. He had also provided a lovely pass with the outside of his right boot for Manuel Lazzari to score in the first half but the Aquile right wing-back had his goal disallowed due to offside.

Lazio earned a victory against a major opponent and “El Tucu” had displayed both clean ball control as well as clinical finishing against the Rossoneri. Genoa was next in Week 34 and the Biancocelesti won 4-3. As a former Sampdoria player, it seemed like a derby of sorts for Correa and he tormented his former rivals.

His first goal of the match gave the Aquile the lead after 30 minutes after the ball fortunately bounced off Grifone defender Ivan Radovanović and onto the feet of the forward, then his second goal of the match in the 56th minute wrapped up the scoring from a Lazio perspective. He received a pass from Luis Alberto, then decided to cut inside, and he beat Mattia Perin in the Genoa goal with a low and curling shot.

Unfortunately for Lazio, it succumbed to a 2-0 defeat to Fiorentina in Week 35 and Correa had the best chance for the Aquile, forcing a save out of Bartłomiej Drągowski. The Biancocelesti are six points off a Champions League spot but they do have a game in hand against Torino. It will be a mammoth task to overcome the likes of Napoli, AC Milan, and Juventus in the battle for one of the remaining places.

If Correa can continue to strike a great understanding with Immobile and produce more moments of individual brilliance, Lazio might be able to play among Europe’s elite again and the Argentine can also beat some personal records in the process.