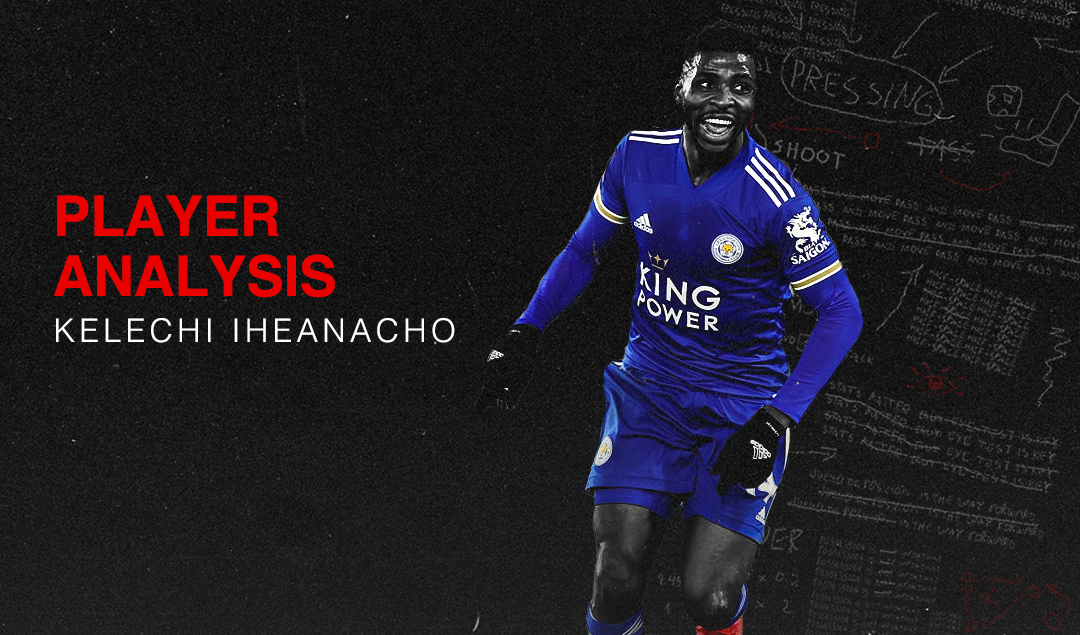 At 34 years of age, Jamie Vardy continues to go strong for Leicester City, having scored 12 goals and 7 assists in 25 appearances for the Foxes, who currently sit third in the Premier League table. Whilst Leicester continue to reap the results from their legendary talisman who seemingly doesn’t know how to slow down, they will need to find a long-term replacement sooner rather than later. The heir to Vardy’s throne could be right next to him in the King Power Stadium.

Since joining from Manchester City for a fee of £25 million, Kelechi Iheanacho has struggled to solidify a starting spot and justify his lofty price tag, having scored just 9 goals and 11 assists in 71 Premier League appearances in his first three seasons in the West Midlands. Whilst he looked set for a move away, he ended up remaining this season and has finally reached red-hot form under Brendan Rodgers, playing a key role in their fight for Champions League football.

The Nigerian forward is hitting the best goalscoring numbers of his career with 12 goals and 5 assists in 28 appearances this season, locking down a starting spot under Rodgers following injuries to Harvey Barnes and James Maddison. As he enters the final year of his contract, the Foxes look primed to tie him down with a new £90,000-a-week deal that would see him continue his prime years at the King Power Stadium.

Born in Imo, Nigeria, Iheanacho began his development at Taye Academy in Owerri, quickly progressing through the ranks for club and country and earning a call-up to the 2013 FIFA U-17 World Cup in the United Arab Emirates. With six goals and seven assists, Iheanacho led Nigeria past Iran, Uruguay and Sweden, before defeating Mexico in the Final in Abu Dhabi. His performances landed Nigeria their fourth U-17 World Cup and saw him bequeathed with the Golden Ball award.

Prior to his heroics in Abu Dhabi, Iheanacho was already attracting attention from the likes of Arsenal, Sporting and Porto, but it was Manchester City who won the race for him. The youngster signed a pre-contract agreement with the Cityzens on December 2012, stating his intent to join the club following his 18th birthday, and after winning the Most Promising Talent of the Year at the CAF Awards, Iheanacho headed for England.

Whilst work permit issues initially prevented him from playing for the reserve side, Iheanacho excelled for the U-19 and U-21 sides and was included in City’s preseason tour in Australia, where his impressive performances earned him a call-up to the senior team. He made his debut on August 29, 2015 in a 2-0 victory over Watford, and two weeks later, he scored within seconds of coming on against Crystal Palace to lead City to a last-gasp victory at Selhurst Park.

From that point on, Iheanacho became a reliable supersub under Manuel Pellegrini, scoring 14 goals and 5 assists in 35 appearances and ending his season with a goal every 93.9 minutes, the best goal-per-minute ratio in the Premier League. While his minutes were limited following the summer arrivals of Nolito and Leroy Sané, he still managed to provide 7 goals and 3 assists in 899 minutes in Pep Guardiola’s debut season in England.

However, the emergence of Gabriel Jesus saw Iheanacho starved of playing time behind the Brazilian youngster and Sergio Agüero, and on August 3, 2017, he joined Leicester City on a five-year contract. Although he arrived with a reputation as one of the brightest young poachers in Europe, Iheanacho struggled to convince under Craig Shakespeare and Claude Puel, with Shinji Okazaki often being preferred over the Nigerian youngster.

Iheanacho’s fortunes worsened further with the appointment of Brendan Rodgers as manager on February 26, 2019, and it looked as if he was destined for a departure after making just two EFL Cup appearances through November. However, he made his first Premier League appearance of the season on December 1, coming on as a substitute for Ayoze Pérez and leading Leicester to a comeback victory over Everton with one goal and an assist. 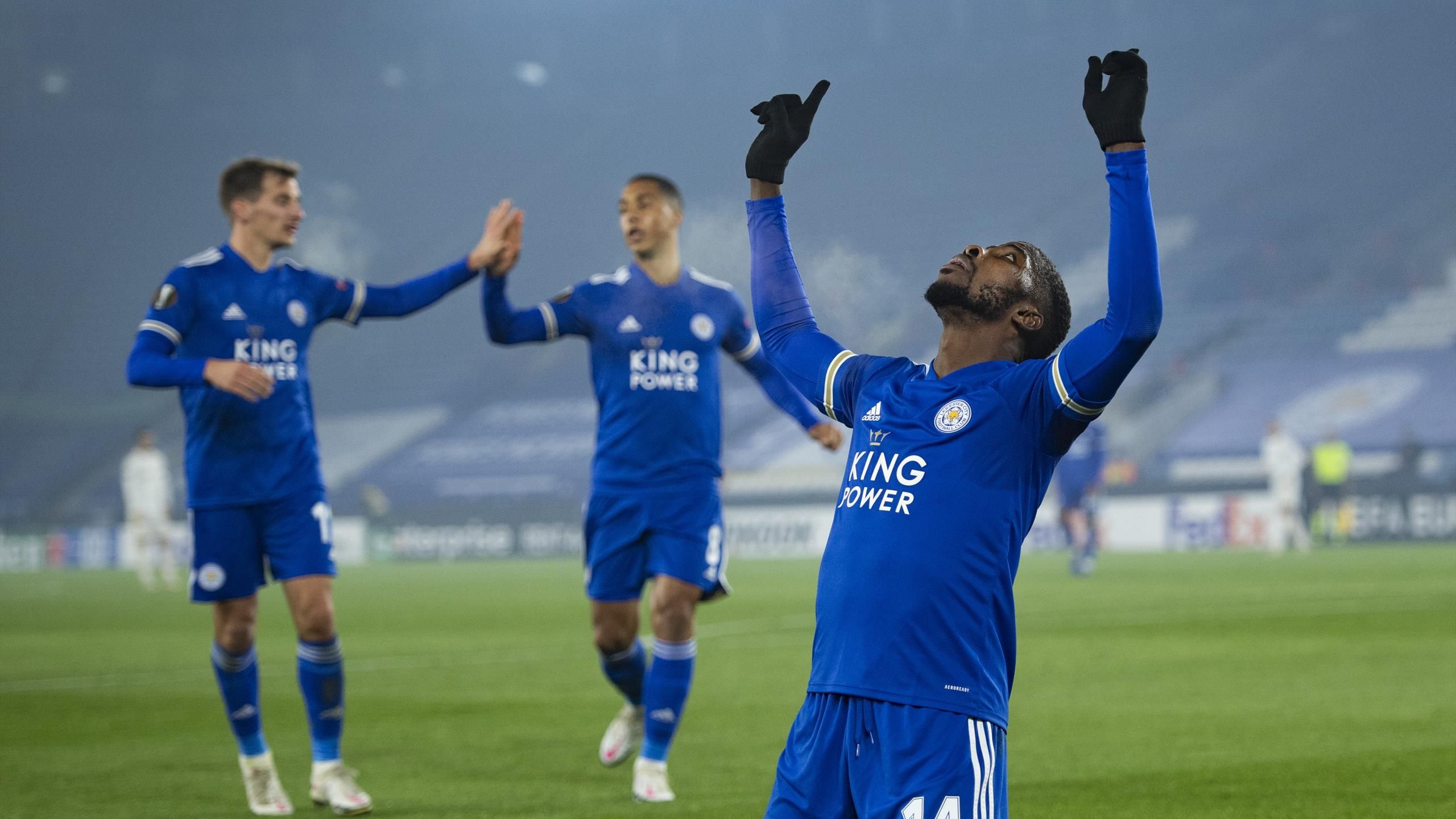 After being an unused substitute in a 1-1 draw to Everton and a 1-3 defeat to Leeds United, Rodgers elected to bench Marc Albrighton and start Iheanacho at center forward against Fulham, with Pérez moving to the right flank of the 4-2-3-1. It worked like a charm, with the Nigerian heading home a cross from Harvey Barnes to open the scoring at Craven Cottage, as Leicester took a 2-0 victory to maintain their grasp on top four.

The following week, Iheanacho scored the lone goal in a 1-0 victory against Brighton in the Fifth Round of the FA Cup, but he remained on the bench for the following two league matches against Liverpool and Aston Villa. However, injury to James Maddison saw Rodgers shift from a 4-2-3-1 to a 4-4-2, with Iheanacho starting alongside Vardy in a 1-3 defeat to Arsenal on February 28.

The Northern Irish manager was forced to shuffle his deck of cards once again after Barnes suffered a knee injury against Arsenal, opting for a hybrid of a 3-4-1-2 and a 3-5-2 in the following matches. The switch in formation reaped results, as Iheanacho scored the equalizers in a 1-1 draw against Burnley and a 2-1 victory over Brighton. To cap off an excellent month, he fired a hat-trick against Sheffield United and led the Foxes to the FA Cup semifinals with a brace and an assist against Manchester United.

“Kelechi has always contributed. Maybe his confidence was lower, but he works so hard every day and always comes in and gives his all. You see his confidence now. He’s at the top of his game. It’s a different structure [up front]. Kelechi is probably best with someone up there with him. Those two are working very well,” stated Rodgers after the United match.

The formation change has seen Iheanacho turn into the focal point in attack; whilst Vardy does most of the running and the dirty work, Iheanacho is able to wait for tap-ins and run into space to receive in the final third. Whether playing on the shoulder of the last defender or wreaking havoc on the counter, Iheanacho’s clinical finishing has been truly showcased over the past month.

Whilst Vardy and Pérez came close to opening the scoring, it was Iheanacho who broke the deadlock in the 39th minute. Youri Tielemans found Pérez between the lines, who quickly turned and played a through ball towards the edge of the box. Vardy beat Chris Basham for pace and fired in a low cross across the box, and the Nigerian calmly tapped it into the empty net. 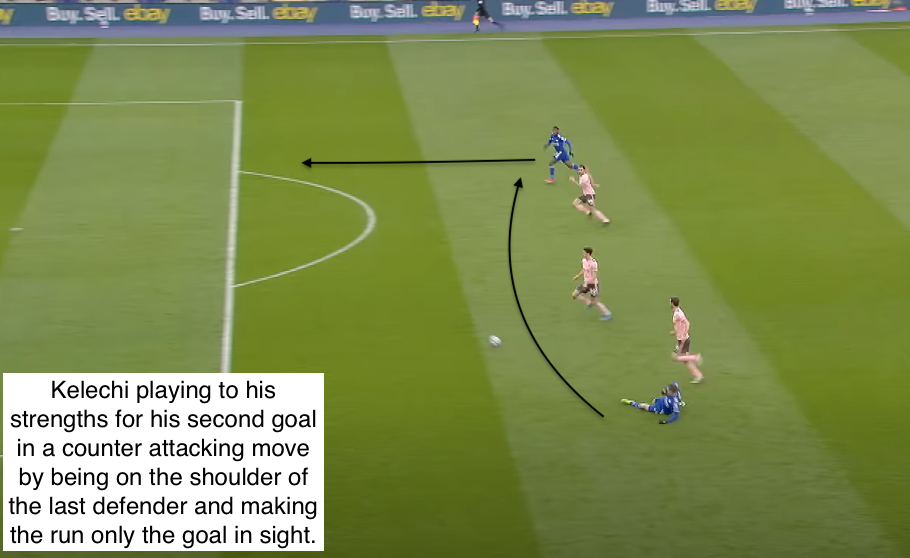 Whilst Basham prevented a goal with a last-ditch goalline clearance, Pérez doubled the lead in the 64th minute after finishing off a rapid counter-attack. Shortly after, Iheanacho added a third goal; Tielemans played an inch-perfect through ball between Ethan Ampadu and Basham, which Vardy quickly latched onto, playing a cross to Iheanacho who blasted the shot past Aaron Ramsdale and into the back of the net.

His third goal, however, was undoubtedly his finest work, as he received a short pass from Wilfred Ndidi, eyed up a passing option, before deciding to shoot from long range and fire in a shot into the bottom right corner. An own goal from Ampadu only served to pad Leicester’s margin and confirm Sheffield United’s impending relegation.

While he has reached red-hot form in front of goal over the past month, it remains to be seen how Iheanacho does while playing as a lone striker rather than as a strike partner for Vardy. At 6’1,” he isn’t the most physical striker who is capable of winning aerial duels, outmuscling defenders and holding up the ball for his teammates, at least, not to the level of his compatriots Victor Osimhen and Paul Onuachu.

Since replacing Salisu Yusuf as the manager of the Nigeria national team, Gernot Rohr has mainly opted for a 4-2-3-1, and with Osimhen and Onuachu competing for the center forward position and Alex Iwobi locking down a starting spot as the central attacking midfielder, it is unclear where Iheanacho fits in. The center forward position is certainly his best bet, but whether he can hold off his aforementioned teammates for the starting spot is an entirely different question.

Likewise, it is equally unclear what will happen to Iheanacho once Maddison and Barnes return to full fitness. Will Rodgers continue with his two-striker formation? Will he bench Vardy? Will he revert back to the 4-2-3-1 and play him in an attacking midfield role behind Vardy? Only time will tell, but with the Foxes looking primed to tie him down to a long-term contract, it seems more and more likely that he will spend the rest of his prime years at the West Midlands.

Despite suffering a spate of injuries this season, Leicester City currently find themselves third in the Premier League with a seven-point gap over fifth-placed West Ham, whilst they will face Southampton in the FA Cup semifinals on April 18. If they beat the Saints, they will face Chelsea or Manchester City in their first FA Cup Final since 1969, and they’ll have a chance to win the competition for the first time in the club’s 137 years.

No matter what, Jamie Vardy will continue to write his legacy as the greatest player in Leicester City’s history and lead the Foxes to lofty heights. However, waiting in the wings is Kelechi Iheanacho, who at 24 years of age is finally starting to solidify his case as the heir to Vardy’s throne.