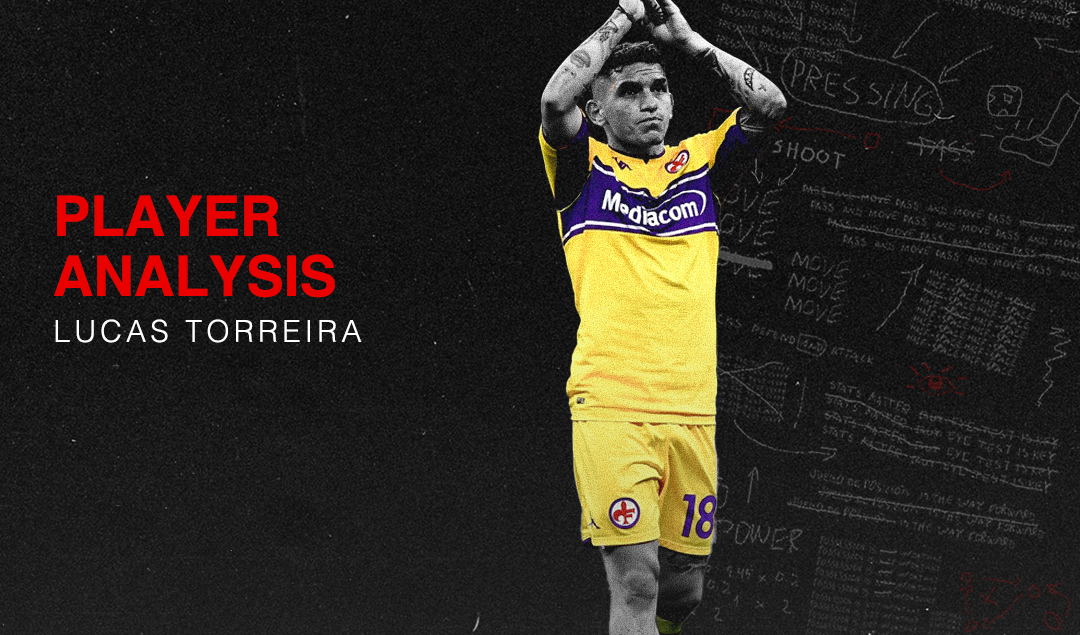 Fiorentina has made significant improvements since it appointed Vincenzo Italiano as coach for the 2021/22 campaign.

After years of struggles under coaches Vincenzo Montella, Giuseppe Iachini, and Cesare Prandelli, Viola president Rocco Commisso now has a tactician that has given his squad an identity and a style of play.

Italiano has been able to implement his 4-3-3 formation which encourages his players to develop great comfort on the ball and create different passing combinations.

Fiorentina under the former Spezia coach is currently eight in Serie A with 47 points after 30 rounds albeit with a game in hand and the Viola have the chance to qualify for the UEFA Conference League or Europa League.

Having control in midfield is a major part of Italiano’s philosophy and Uruguayan midfielder Lucas Torreira has been one of the reasons the German-born coach can make his ideas work.

Torreira is currently owned by English club Arsenal but Fiorentina could purchase the 26-year-old permanently for €15 million at the end of the season and the Florentines could pay that figure or even try to lower it.

The Uruguayan has had previous experiences in Italian football, having earned promotion to Serie A with Pescara through the Serie B play-offs in 2015/16 and he had two impressive seasons in Italy’s top flight with Sampdoria.

Torreira’s form since leaving the Blucerchiati has been mixed. He impressed in his first season, which included a stunning bicycle kick goal in a 1-0 win against Huddersfield Town in the 2018/19 Premier League campaign, but struggled in his second season in North London.

For the 2020/21 campaign, he spent the season on loan at Spanish club Atletico Madrid, but he struggled to earn a regular place in midfield and he played only 19 games in La Liga.

After two seasons of indifferent form, Torreira returned to Italy in August 2021to join Fiorentina on loan with an option to be bought outright and joining the Viola has been fundamental in getting the Uruguayan’s career back on track.

In 25 Serie A matches with Fiorentina so far, the Uruguayan has scored four goals and provided an assist. He has been a part of a midfield trio also consisting of Ghanaian box-to-box midfielder Alfred Duncan and Italian veteran Giacomo Bonaventura while the likes of Gaetano Castrovilli and Youssef Maleh also playing their share of cameos.

His ability to fit into Italiano’s tactics has forced Chilean midfielder Erick Pulgar to leave Florence for Turkish giants Galatasaray, with the former Bologna man joining Gala on loan in January.

Three of Torreira’s goals have come in his last eight Serie A appearances and this is reflected in changes to his role in the team under Italiano. In the first half of the season, the Uruguayan was expected to give protection to the defense and also operate as a deep-lying playmaker.

After star striker Dušan Vlahović was sold to Juventus in January, Fiorentina acquired forwards Krzysztof Piątek and Arthur Cabral from Hertha Berlin and Basel respectively. However, this did not stop Italiano from encouraging Torreira to push forward and make late runs into the box.

With Piątek and Cabral not scoring prolifically, the concept of having more players enter the box to get into scoring positions has become important and Torreira in particular has scored twice in the last two rounds of Serie A action before the international break. 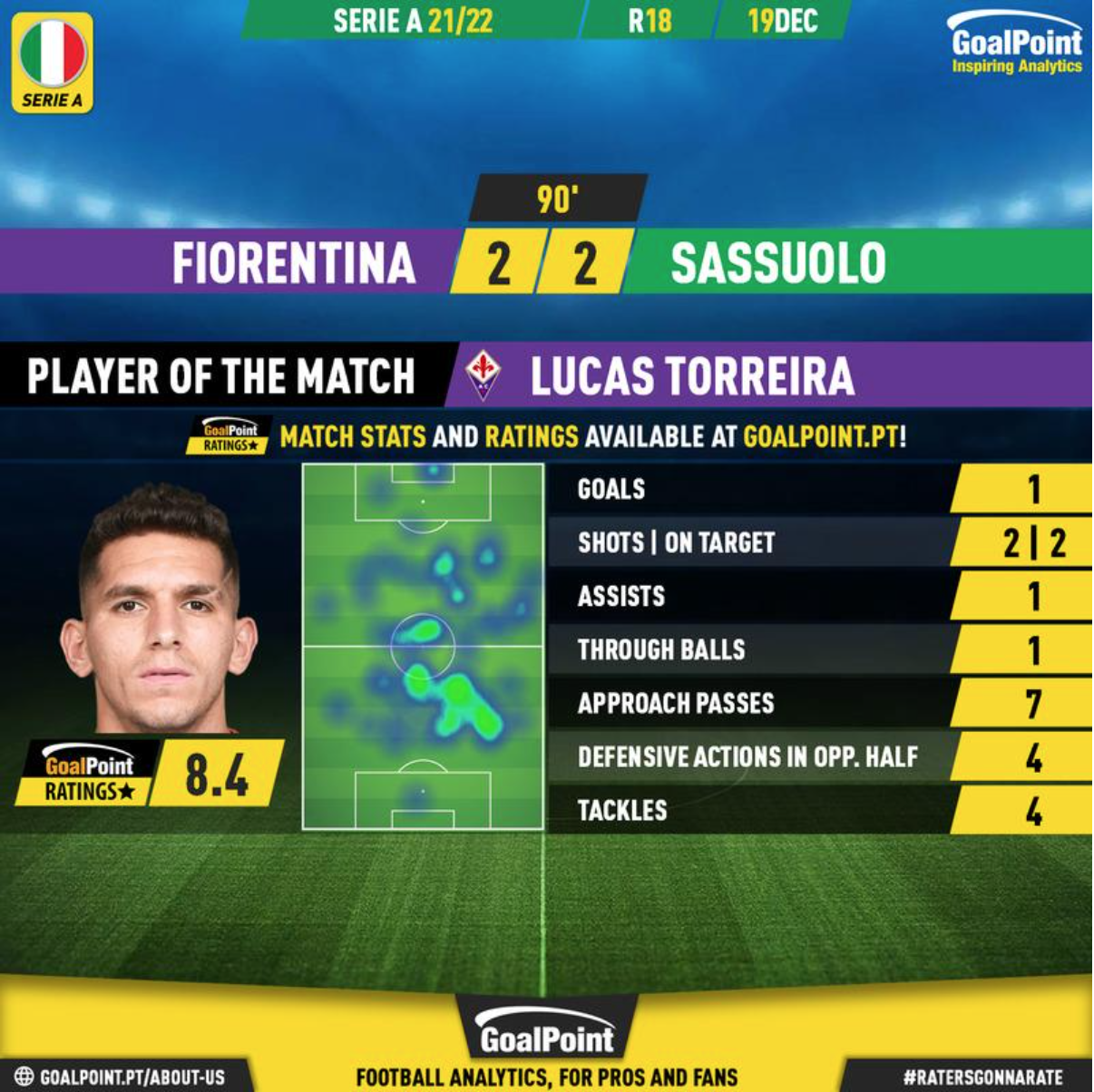 Torreira’s first goal of the season came in the 2-2 draw with Sassuolo in Week 18 and it was a game in which he was the unlikely hero for Fiorentina. The Neroverdi went 2-0 up before half-time but the Viola produced a comeback in the second half thanks to the diminutive Uruguayan.

The Uruguayan supplied the through-ball which Dušan Vlahović ran onto and struck the ball past Sassuolo goalkeeper Andrea Consigli.

The second Viola goal came from a scramble in the box and after a couple of shots were blocked, the ball fell to Torreira, who was unmarked at the far post and tapped the ball in before Consigli could get to it in time.

The ex Sampdoria man made seven approach passes, which is impressive considering that the heat map indicates that he was in his own half for most of the time against Sassuolo.

Based on the heat map, it seems that his main role was to protect center-backs Nikola Milenković and Lucas Martínez Quarta. However, the other statistics show that he was still able to find the right moments to advance forward and make a significant contribution. 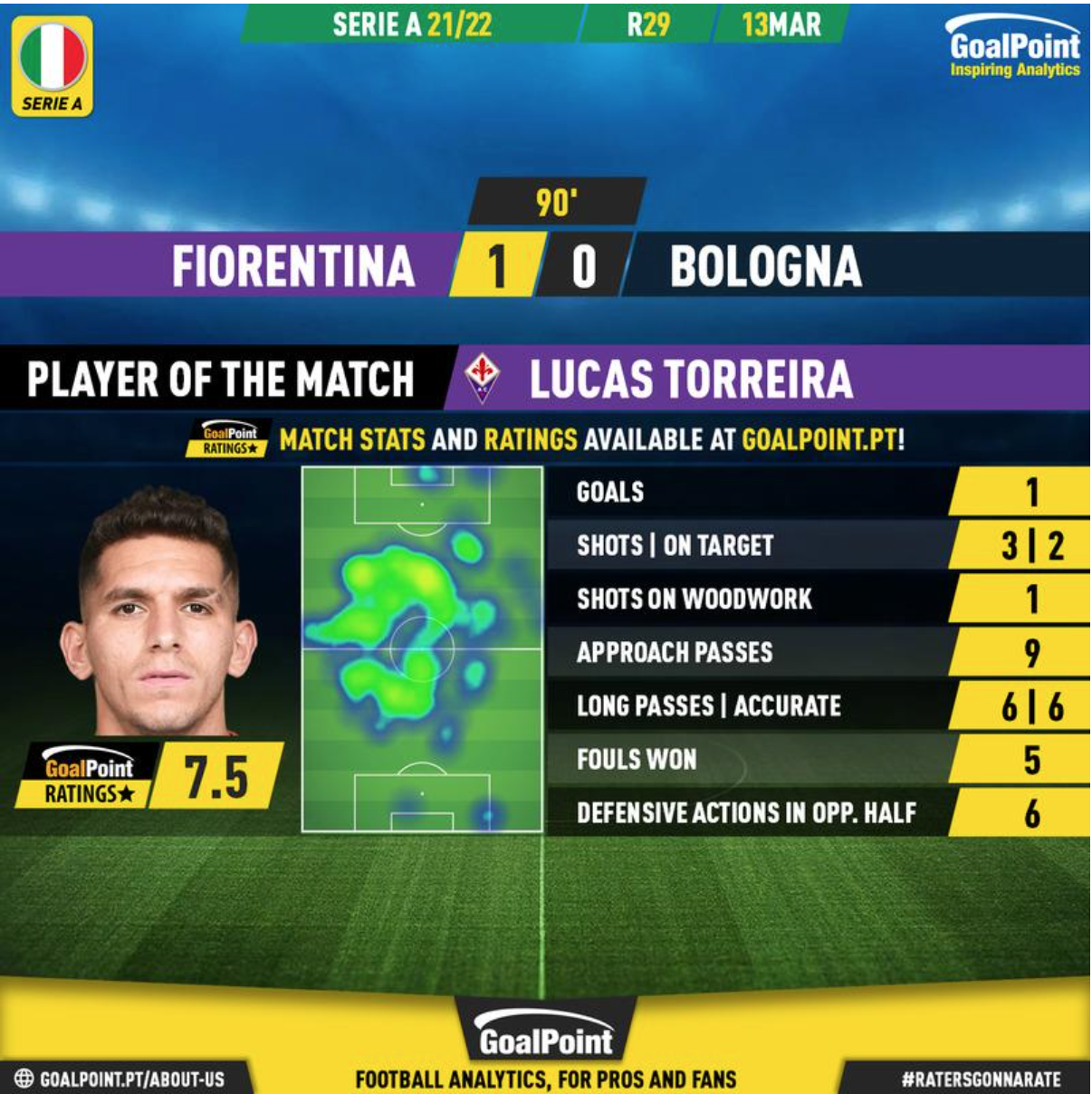 Torreira got his third league goal of the season in the 1-0 victory at home to Bologna. The goal itself was very scrappy as the 26-year-old bundled the ball over the line with some help from Arthur Cabral.

Although the goal was a bit fortuitous, it was well deserved. He had three shots with two on target, made nine approach passes, made six accurate long passes, earned five fouls, and made six defensive actions in the opposition half.

According to the heat map from GoalPoint, Torreira was all over the midfield. Compared to the Sassuolo game when he was mostly between the defensive and midfield lines, the Uruguayan worked as an all-round presence on the pitch. 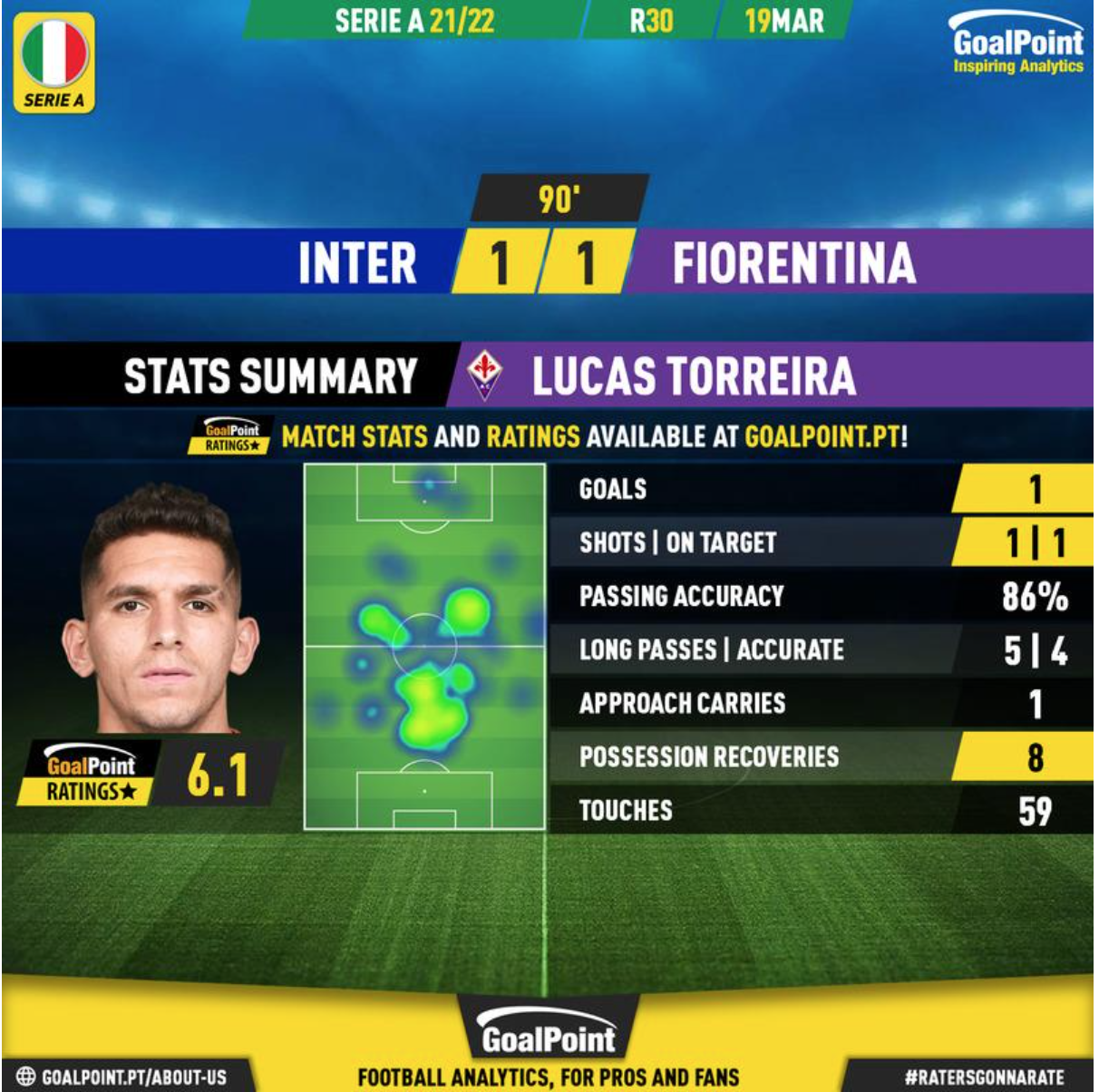 Fiorentina went into the international break with a 1-1 draw away to reigning Serie A champions Inter. It was a match in which the Nerazzurri had 51 percent possession compared to the Viola’s 49, but the Tuscans looked the more dangerous with the ball and pressing all over the pitch.

Torreira scored early in the second half after Fiorentina completed a neat team move, and he made a late run into the box ahead of Inter midfielder Nicolò Barella, giving him an easy chance to tap the ball in.

The Uruguayan didn’t advance forward too much, but once again, he made it count when he did against Inter. He also had a successful passing rate of 86 percent, completed four out of five long passes, and made eight possession recoveries.

Since Rocco Commisso became Fiorentina president in 2019, the results have not matched the euphoria that the Italian-American has created around the club. However, the Viola under Vincenzo Italiano look like a team capable of stepping in the right direction.

Lucas Torreira looks like a footballer who deserves to stay in Florence and surely Italiano will want the midfielder to remain at the club as well.