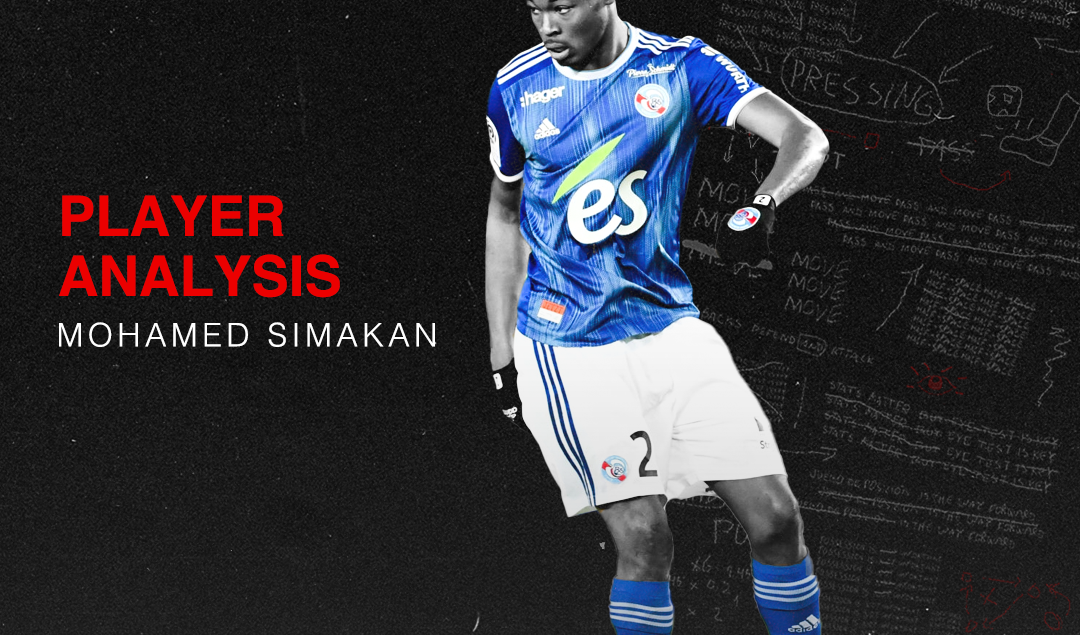 From Jules Koundé to William Saliba, there are plenty of young French center backs who have broken onto the scene and earned big moves over the past few years, and the next player to do so could be Mohamed Simakan.

Born in Marseille on May 3, 2000, Simakan began his career as a striker, scoring 130 goals for the U-11 team of FC Rouguière, his first club. Needless to say that such performances attracted the attention of Olympique de Marseille, where he immediately was repositioned as a central defender. He spent five years at OM’s academy, where he partnered with Boubacar Kamara throughout his stint. Kamara has since risen up the academy ranks to become a starter for André Villas-Boas at the holding midfield position.

However, despite blossoming as a reliable defender as well as a natural leader, he was not offered the contract his talent deserved. Simakan then decided to leave for SC Bel-Air, a local, much smaller club that fully trusted him. He captained the team for two seasons, and developed into a promising prospect.

Strasbourg were among those interested in him, and offered him a trial in February 2017, before signing him straight after. Upon his arrival, club’s president and former French international Marc Keller lauded him with lofty comparisons to Real Madrid center back Raphaël Varane. Strasbourg manager Thierry Laurey and the club’s fans have constantly praised his dedication and nonstop hustle on the pitch, as well as his calm, reserved attitude off the pitch.

At 6”1 (1m87) and 182 lbs (82 kg), Mohamed Simakan is quite strong, solid on his feet, and a bit heavy on his first strides, but when he reaches his full speed, he’s nearly unstoppable. Simakan knows how to use his colossal body to shield the ball either defensively or offensively, and although the U20 French international cannot be considered a ball-playing centre-back just yet, he is not one to panic with the ball on his feet. 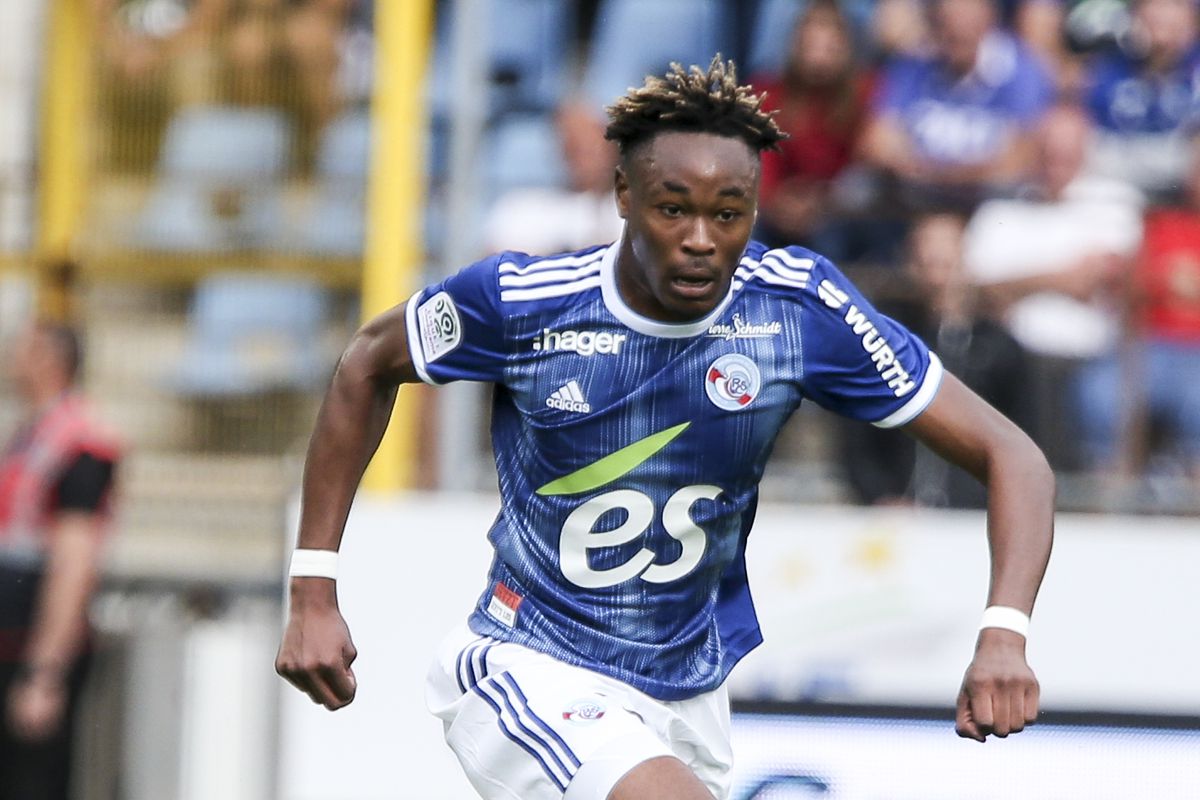 After spending a year in the club’s reserves, he was called up to train with the first team for preseason training during the summer of 2018. Strasbourg had clinched the Ligue 2 Championship just weeks earlier, winning promotion to the top flight after a 9-year absence.

In order to bolster their squad, Strasbourg brought in experienced center backs Lamine Koné from Sunderland and Stefan Mitrović from Gent to reinforce the defense. They promoted a treasure trove of talent from the academy as well, bringing in Anthony Caci (’97), Youssouf Fofana (’99) and Simakan (’00) into the first team squad.

Laurey expected to gradually involve Simakan into the first team set-up, taking measures to ensure that he wasn’t thrown into the deep end immediately. But all these plans were shattered after he picked up a season-ending injury during a friendly against KAA Gent in July.

At this moment, a ruptured cruciate ligament not only forced him out of the team, but casted doubt on his progression, as such injuries can leave an everlasting trauma both physically and mentally. Yet Simakan bided his time, taking the full season to recover and regaining his momentum. Strasbourg enjoyed a superb return to Ligue 1, finishing 11th and earning a ticket to the knock-out stages of the Europa League after a dramatic victory against Guingamp in the Coupe de la Ligue final.

A year after his horrific injury, Simakan took part in the 1st leg of the knock-out stages against Maccabi Haifa, operating as the right-sided centre-back in Laurey’s 3-man defense. After impressing in front of a jam-packed La Meinau, he was also used during the 2nd leg against Lokomotiv Plovdiv but in a different role. Laurey started him as a right back, where Simakan’s defensive qualities as well as his remarkable physicality helped stabilized the team.

Bit by bit, Simakan managed to solidify a place in Laurey’s starting line-up at the tender age of 19. His performances both as centre-back and right-back led him to be considered among the best defenders in Ligue 1 at the winter break, which saw him attract the attention of European powerhouses such as Inter, Borussia Dortmund and RB Leipzig. 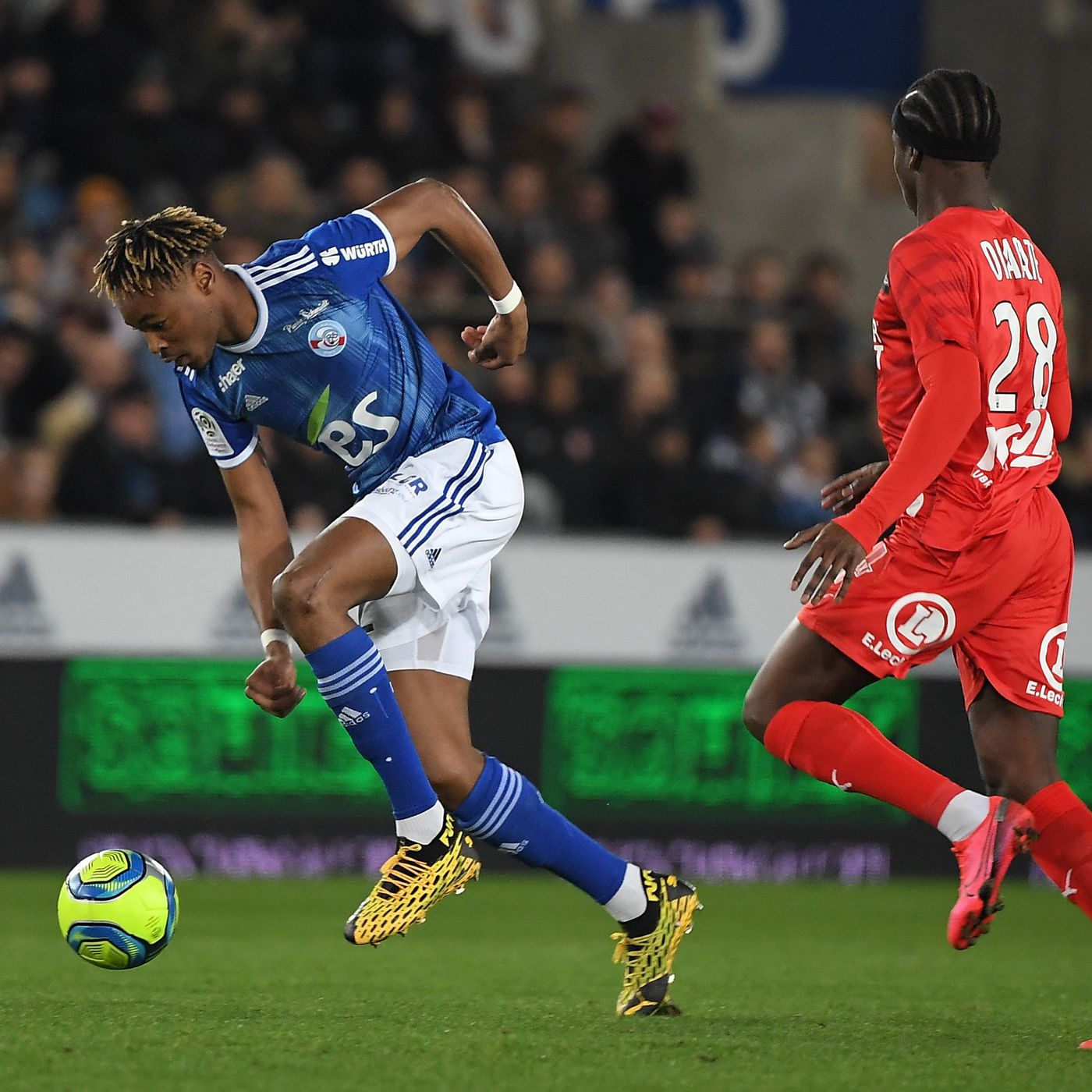 He ended up playing 25 games during the truncated 2019-2020 Ligue 1 season, operating 14 times as right  back, 10 times as central defender, and once as a defensive midfielder. For a total of 1,880 minutes, he collected only 4 yellow cards and no red cards, failing to register a goal or an assist.

With a 77% passing completion rate, he clearly needs to improve on his passing, but with Kenny Lala’s prominent role on his right side, the latter being used either as a playmaking full back in a 5-3-1-1 or as a winger in a 4-3-3, Simakan’s attacking responsibility is limited.

As a central defender, he added a much-needed dose of pace to a relatively slow defense of Mitrović and Koné, shining due to his recovery speed and anticipation. He still needs to improve in the build-up phase, but with an 82% tackle success rate and 9.1 duels won per game, he has had a remarkable start to life in professional football.

His best position is on the right side of a 3-man defense, since his physical skills need a bit more space to be fully exploited. As a right-back, he cannot provide enough attacking output, and it is clear that he is more suited to a center back role than a right back role, even if he is playing in a back four.

With his contract running until 2023, Strasbourg are in a strong position to either keep hold of their defensive leader or demand top dollar for him. Simakan himself has stated his desire to stay put at Alsace, claiming in July that he desperately needed stability to hone his skills and repeat his excellent performances.

Strasbourg on the other hand might be looking to cash in on Simakan to reinforce their squad in the final week of the transfer window, as they currently sit in the bottom three after picking up three points from their first five games. While Strasbourg looked set to fetch a fee of €20 million-€25 million for their prized gem midway through the season, the pandemic has curtailed his transfer value and the amount of potential suitors.

West Ham, Rennes, Bayer Leverkusen, Lyon, Milan and Atalanta have all been linked with the 20-year-old Marseille native, and with Strasbourg holding out for a fee of €15 million, there is a chance that he departs during the final week of the window. Sooner or later, though, Simakan will depart Strasbourg, as his combination of athleticism, versatility, and intelligence offers an elixir that nearly every top club is searching for.