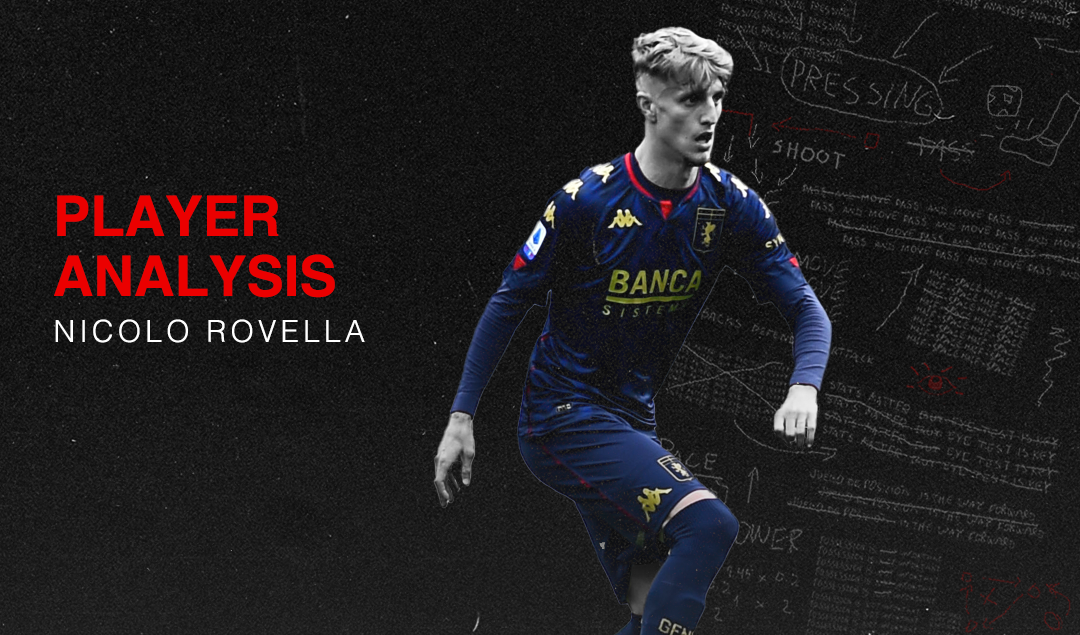 Italy won its first European Championship for the first time since 1968 when it defeated England on penalties in the Euro 2020 Final but its path to the final was impressive and delightful.

Coach Roberto Mancini encouraged a more possession-based philosophy compared to his predecessors and the Azzurri embraced that proactive mentality. Nicolò Barella, Jorginho, and Marco Verrati would control the play, and then the likes of Manuel Locatelli, Matteo Pessina, and Bryan Cristante could come on when necessary.

It’s incredible to consider that Gaetano Castrovilli only played once at the tournament while the likes of Nicolò Zaniolo, Stefano Sensi, and Lorenzo Pellegrini were ruled out because of injury.

Remarkably there is more talent for Mancini to choose from and another promising midfielder emerging in Italian football is Nicolò Rovella. Adept in both the defensive and attacking phases of the game, the 19-year-old has featured in Italy’s youth teams and he will be looking to join some illustrious company in the future.

Juventus acquired the midfielder from Genoa in January for €18 million plus €2 million in performance-related bonuses, but the Bianconeri have allowed him to remain on loan at the Grifone until the end of the 2021/22 season.

It may not be guaranteed that Rovella will stay on the Juventus books for very long though and a report in Il Corriere dello Sport in July has suggested that he could be included in a deal that will see Manuel Locatelli join La Vecchia Signora from Sassuolo in the hope that the Neroverdi lower their demand for €40 million for the Italian international.

Born in Segrate, located east of Milan, Italy, Rovella played his youth football for ASD Alcione in a quarter within western Milan before he joined the Genoa youth system. His performances with the Genoa Under-17 team earned him selection for Italy at that level.

Rovella earned six caps with the Azzurrini in that age category including four appearances at the 2018 UEFA European Under-17 Championship, which they lost to The Netherlands on penalties. After that tournament, he established himself in the Genoa primavera, and he played 26 times throughout the 2018/19 Campionato Primavera 1 season, scoring three times and providing three assists in the process.

One particular match from that campaign which stood out was in the Rossoblù’s 3-3 draw at home to Roma in Week 8. He scored with a free-kick and he also assisted in another goal but he was sent-off after receiving two yellow cards. Despite his sending-off against the Giallorossi, Rovella was given the captaincy for one game after he served his suspension. Genoa won 2-1 in its Week 10 match against Palermo and the midfielder assisted in one of the goals.

Although he continued to play in the primavera side, he earned some playing time with the senior squad during the 2019/20 season. He made his debut as a substitute under then-coach Thiago Motta in the Grifone’s 3-2 victory against Ascoli in the fourth round of the Coppa Italia on December 3, 2019. Later that month, the Italo-Brazilian tactician also awarded Rovella with his Serie A debut, and the midfielder came on in the 62nd minute for Filip Jagiełło in a 4-0 defeat away to Inter.

After Motta was sacked, Rovella had to wait until Week 36 to play for the senior team again. Davide Nicola was now in charge and the midfielder started in Genoa’s home clash against Inter. Unfortunately for the Grifone faithful, the Nerazzurri secured a 3-0 win, but the youngster did play for 77 minutes before he was replaced by striker Mattia Destro.

It seemed that he would have to wait a while for his opportunity to play during the 2020/21 season, but several Rossoblù players contracted COVID-19 after a 6-0 defeat to Napoli in Week 2 of Serie A and he was integrated into the senior squad soon after.

Rovella would go on to play 20 games throughout the league campaign and he supplied two assists. His first assist was in a 3-1 defeat away to Juventus, when his corner was headed in by Gianluca Scamacca, and the second was a through-ball for Eldor Shomurodov to score the only goal against Cagliari in the final round of the season.

According to WhoScored, Rovella completed a successful passing rate of 86.5 percent. He averaged 0.8 key passes, 2.8 long balls, 40.5 passes, 1.5 tackles, and 0.9 clearances per match in addition to being fouled 1.2 times a game.

The Grifone often played on the counter-attack under Rolando Maran and then with Davide Ballardini as coach, but the 19-year-old nonetheless was still able to produce some decent passing statistics. Regardless if he operated in the center or on the left of the central midfield trio, his skills on the ball and ability to make progressive runs were there to see.

One aspect of his game that can be improved is his aggression. He accumulated four yellow cards throughout the 2020/21 Serie A season and he was sent-off after earning two yellow cards in Italy’s 0-0 draw against Spain at the 2021 UEFA European U-21 Championship.

Despite that, Azzurrini coach Paolo Nicolato placed his faith Rovella’s playmaking abilities and he brought him back into the starting line-up after serving his ban. Unfortunately, the midfielder could not prevent the Italians from losing 5-3 to Portugal after extra time in the quarter-finals.

Rovella might not be the finished product yet but he has demonstrated more than glimpses of potential. Genoa might not be the most ideal environment for a player to develop considering the trigger-happy nature of Rossoblù president Enrico Preziosi and his constant changes in coaches but the promising midfielder has been able to play his game regardless of who is coach.

It remains to be seen how high of a level he can reach in terms of his talent but a midfielder like Rovella shows that Italy could have an abundance of riches in that position in no time, if not already.