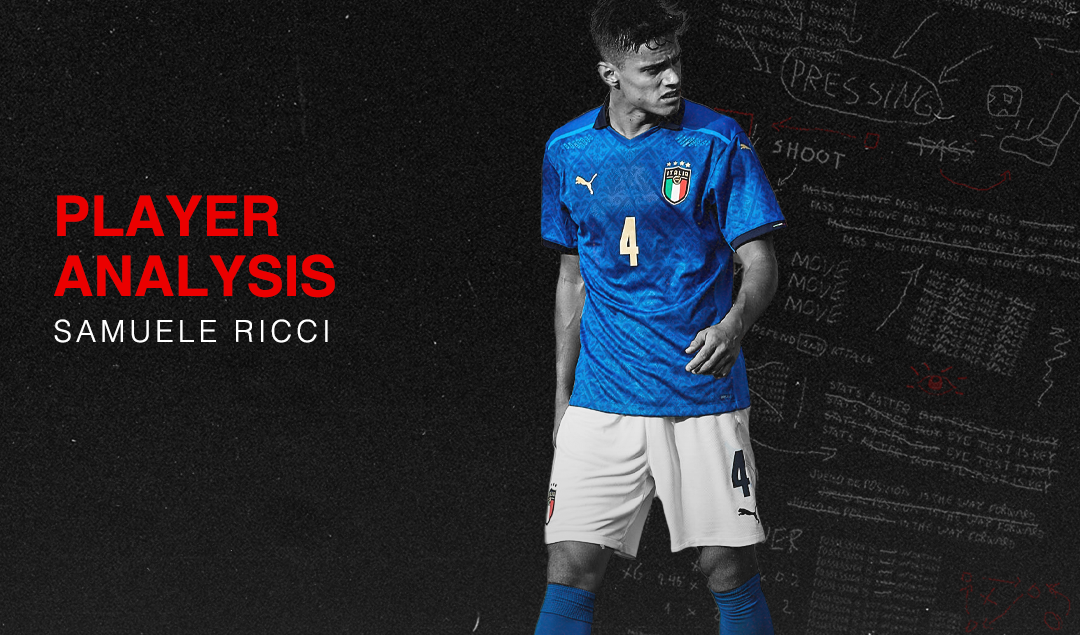 Italy currently has a wealth of options in midfield, which allows Azzurri coach Roberto Mancini to be spoilt for choice. Even with his settled trio of Nicolò Barella, Jorginho, and Marco Verratti, there are still many quality options available to him on the bench or he unfortunately has to omit.

There are also a number of younger midfielders like Sandro Tonali, Davide Frattesi, and Nicolò Rovella who are emerging as well as Empoli playmaker Samuele Ricci. The 20-year-old deep-lying midfielder was an integral part of the Tuscan club’s promotion from Serie B and he has already displayed his ability to adapt to Serie A.

Born in Pontedera in the province of Pisa on August 21, 2001, Ricci came through the Empoli youth academy in his teens and he featured prominently in its Allievi Nazionali squad. His form earned him a call-up for the Italy Under-17 squad and he represented his country at the 2018 European Under-17 Championship in England.

The midfielder went on to play five out of six matches at the tournament, which the Italians lost to The Netherlands on penalties. Jurrien Timber gave the Dutch the lead early in the second half of the final, Ricci equalized for the Azzurrini to make it 1-1, and then Alessio Riccardi from Roma gave the Italians a 2-1 lead. Brian Brobbey brought it back to 2-2, forcing a penalty shoot-out, which the Oranje won 4-1.

Ricci was promoted to the Empoli Primavera squad for the 2018/19 season and he featured in all 30 matches of the league campaign. Operating as a left-sided midfielder in the 4-3-1-2 formation or mezzala sinistra, he scored twice and he also provided three assists.

The progression of the Pontedera native’s career continued in 2019/20 as he went on to establish himself in the senior team, which had just been relegated from Serie A. In the opening nine rounds of the Serie B campaign, he appeared twice as a substitute, but he featured regularly from Week 10 onwards.

As a midfielder at youth level, Ricci would play on either side of the midfield trio, but at the senior level he was entrusted with operating as a deep-lying playmaker. Despite playing under three different coaches in his first season of senior football, the young midfielder went on to make 28 Serie B appearances.

Empoli finished seventh on the Serie B table in 2019/20 with 54 points, ahead of Frosinone and Pisa due to a better head-to-head record. The Tuscans faced Chievo Verona in the play-offs, but after drawing 1-1 after extra time, the Flying Donkeys progressed to the next stage due to a higher finish in the league table.

After failing to make a return to Serie A on the first attempt, the Azzurri made things right in the 2020/21 season. They appointed Alessio Dionisi from Venezia as coach, a relative unknown who had guided the Lagunari to a midtable Serie B finish in the previous campaign, but he proved to be an inspired choice.

Empoli discovered a coach that embodied its philosophy to a tee. He implemented the 4-3-1-2 formation, improved the quality of the squad, and the team played attacking football. The Tuscans finished on top of the Serie B table with 73 points from 38 games, four points ahead of second-place Salernitana, scored 68 goals and conceded just 35.

Ricci played an important role under Dionisi, operating on the left side of the midfield trio for the Azzurri. The youngster played 33 times in Serie B, found the back of the net twice and supplying four assists.

Surprisingly, Dionisi did not remain at Empoli for its Serie A return in 2021/22. He continued his own rapid rise and he was appointed as Roberto De Zerbi’s replacement at Sassuolo. The Tuscans decided to bring back Aurelio Andreazzoli, who led them to promotion from Serie B in 2017/18, and he sought little need to revolutionize any of Dionisi’s ideas.

Up until the October international break, Ricci started all seven of Empoli’s games of the 2021/22 Serie A season, and Andreazzoli has been using him as the deep-lying playmaker, with Nicolas Haas and Filippo Bandinelli in support.

After seven rounds, the Tuscans were in 10th place on the table with nine points thanks to a shock 1-0 victory away to Juventus as well as wins against Cagliari and Bologna. Ricci has been an important factor in those victories and he scored the sealer in the 4-2 win against the Felsinei with a long-range strike.

According to WhoScored, Ricci so far has made 321 passes, averaging 45.9 per game, made 276 accurate short passes as well as 15 long ones, averages 2.1 long balls per game, has a successful passing rate of 90.7 percent, and he has been dispossessed just three times. In addition to his playmaking abilities, he is a capable ball-winner as well, averaging 1.6 tackles per game, 1.7 interceptions, and 0.9 clearances.

The 20-year-old has been comfortable in his role and he does not seem overwhelmed by playing in Italy’s top flight.

“Let’s say that in front of the defense you have more responsibilities, you are not forced to play more than a simple pass,” Ricci told DAZN in September. “It’s a role I’ve already played, I feel very comfortable.”

After the goal against Bologna, he took the opportunity to realize how much a leap he has made from the youth ranks to the senior squad.

“The first goal in Serie A was indescribable emotion,” Ricci said to DAZN after the 4-2 win in late September. “The goal came in a difficult moment, it really is something more, especially in front of the fans. We gave continuity after the win in Cagliari, this makes us proud and happy. A few years ago, I was to be a ball boy here, today I scored.”

Ricci is also continuing his progress through the Italy youth ranks. After his impact with the Under-17 side, he has represented his country at U-18 as well as U-19 level, and he has earned seven caps with the U-21 side as it attempts to qualify for the 2023 European Under-21 Championship.

While the Italy senior squad might seem like a dream for now, the 20-year-old has demonstrated that he can keep going up a level and improve as a player. With a new generation of Italian midfielders on show in Serie A, Ricci is a part of that group that could truly blossom in the near future.