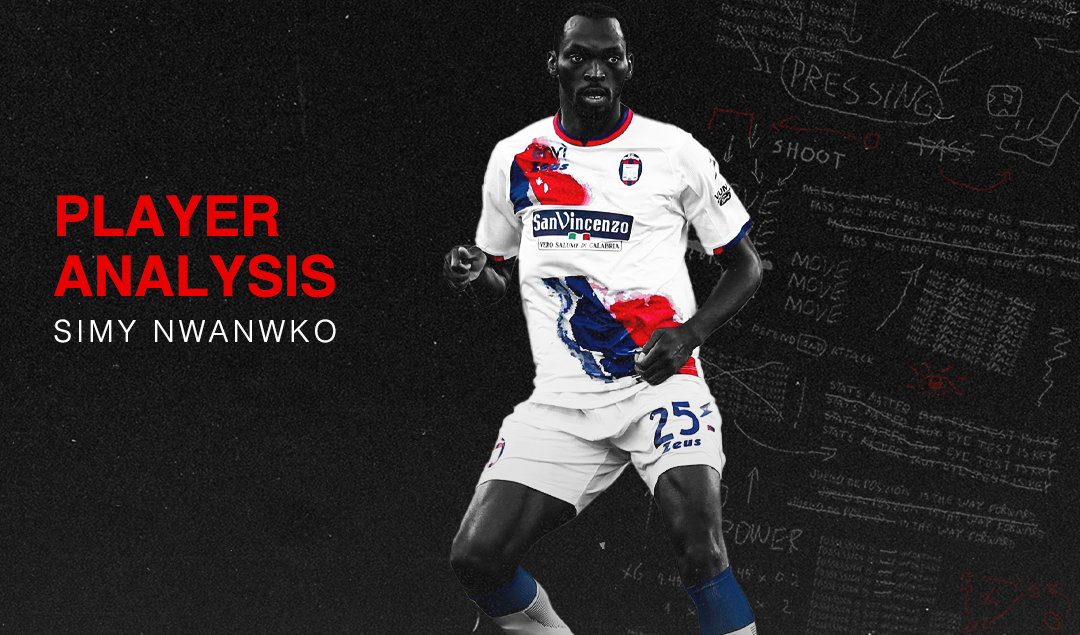 The 2020/21 football season in European football was a favourable one for Nigerian strikers, one of which was Simeon ‘Simy’ Nwankwo. Simy was in stellar form throughout the season, especially in the second half and was one of the very few shining lights in an otherwise dire season for Crotone. Crotone finished the Serie A season 19th on the table, scoring 45 goals and conceding 92, the worst defence in Serie A history. Simy contributed 20 of those goals, scoring a whopping 44% of Rossoblú’s total for the season.

As for his style of play, Simy is a classic target man. Big, strong and bullish despite his slender frame, he’s been a nightmare matchup for Serie A centre-backs this year. However, what separates Simy from other target men is his underrated technical ability. Every touch, flick and shot is intentional, he knows exactly what he wants to do and how to execute it. At 6ft 5 inches tall, Simeon Nwankwo is of course not the fastest, but what he lacks in explosive pace, he makes up for in technical know-how.

Many factors contributed to Simy Nwankwo becoming the joint-fifth top scorer in Serie A this season but the leading one has to be his finishing ability. Whatever criticism directed at Simy in the past, one thing that has never been in doubt is his ability to put the ball in the back of the net. Header, volley, tap-in, side foot, toe-poke, outside of the boot, acrobatic, it doesn’t matter to Simy, he will score however the chance presents itself to him.

His wide array of finishes from this season alone is enough proof. The wonderful flying volley away at Napoli, the chip vs Atalanta and that incredibly nonchalant outside of the right boot finish from 20 yards out while surrounded by multiple Lazio defenders. Those are just a few of the many examples you establish Simy Nwankwo as the lethal center-forward that he is, feed him and he will score.

Another factor almost as important as the ability to finish is Simy’s positional play. The Nigerian striker has fantastic movement off the ball. He possesses the ability to be in the right place at the right time, anticipating his teammates’ and even the opposing defenders’ actions to put himself where the ball is going to be. Alongside Júnior Messias, he has been a constant thorn in the side of Serie A defenses, netting against the likes of Napoli, Atalanta and Juventus.

The Improbable Rise of Junior Messias at Crotone

He spends a lot of his time inside the opposition box as a striker should, so you probably shouldn’t expect too many goals from outside the box from this one, think Javier ‘Chicharito’ Hernández but much taller. His first touch is another weapon in his arsenal, one he utilises frequently and efficiently.

Simy knows he’s probably gonna lose in a foot race so he makes up for that with a strategic and purposeful first touch. His first touch in the box almost always sets him up for a shot.  He buys himself half a yard by executing that first touch perfectly, opening up a window of opportunity for a quick shot on goal. It’s rare to find Simy spending too much time on the ball in the box, he’s always so purposeful, intentional and direct.

At 29 years old, blessed with a wealth of experience and a record of 116 career goals in Portugal and Italy’s top 2 divisions, Simy carries an air of assuredness. His confidence in his abilities helps him come across as someone who knows exactly what he’s doing at all the time, hardly anything is fortuitous with him on the pitch.

When he’s not scoring, his impact on the team can still be felt. Simy’s deft touches and high IQ makes him brilliant at link-up play. And although he doesn’t get that many assists, Simy is always going to let his teammates bounce a quick one-two off him thanks to the technical ability combined with vision and awareness.

Simy made a habit of turning up for Crotone when the occasion was grandest, 9 of his 20 league goals were scored against teams in the top half of the table. 7 of those goals came in 8 games against Juventus, Atalanta, Lazio and Napoli, all teams that finished the Serie A season in the top 6.

As we’ve seen this season, Simy Nwankwo can get hot and just keep on firing over a long period of time, he’s streaky. He went on an incredible goalscoring run where he scored 13 goals in the final 14 games of the season and 15 in 19 appearances since the turn of the year, only bettered by Robert Lewandowski, Lionel Messi and André Silva in 2021.

In that period, he found the net 10 times in 7 consecutive games between April and May, establishing himself as one of the hottest strikers in Europe’s top five leagues. Simy sent a few records tumbling this year, he became the highest-scoring Nigerian in any of Europe’s top five leagues for a single season with 20 goals, surpassing Yakubu Aiyegbeni’s 17 games for Blackburn in 2011/12.

His total Serie A tally of 30 goals is the most by any Nigerian in Italy’s top flight, Obafemi Martins held the previous record with 28 goals for Inter Milan. Simy also became the third African player in Serie A history to score in five consecutive games after George Weah in 1996 and Keita Baldé in 2017.

With Crotone now relegated, it is more than likely that Simy Nwankwo will not be playing Serie B football next season, a man of his talents and in his prime deserves top-flight football. He’s already been linked to a number of clubs and he looks like he could be a starter on a mid-table team or a backup option for a top team.