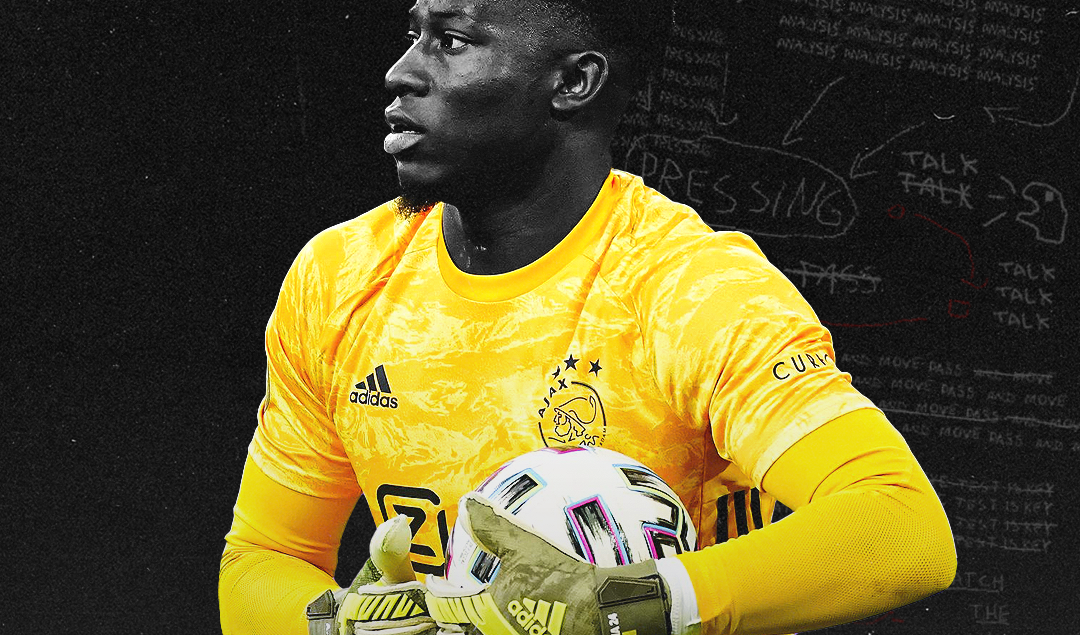 Over the years, several African nations have become specialists at producing players of a certain position or role. Nigeria has become famed for its lethal, potent forwards such as Rashidi Yekhini and Victor Osimhen, Mali for its long-legged, restless midfield workhorses like Seydou Keïta and Diadie Samassékou, whilst Cameroon has developed a penchant for its superb goalkeepers such as Thomas N’Kono, Joseph-Antoine Bell, and Jacques Song’o. There’s a new #1 who’s starring in between the sticks for the Indomitable Lions: André Onana.

Born in Nkol Ngok, Onana began his footballing career in the Samuel Eto’o Academy, a nonprofit organization that was established in 2006 to provide a free footballing education to Cameroonian youths. After impressing in a summer tournament in the Canary Islands at the age of 14, a European giant came knocking for his services.

Alongside the likes of Jean-Marie Dongou and Wilfried Kaptoum, Onana was one of many prospects who made the move from the Samuel Eto’o Academy to Barcelona’s hallowed academy. After joining La Masia in 2010, Onana advanced through the youth ranks, but his time at the club was cut short in 2014.

The Blaugrana side were hit with a transfer ban after a FIFA investigation deemed them to have violated international regulations for signing youth players. Several La Masia players such as Takefusa Kubo, Antonio Sanabria and Onana were prevented from playing for Barcelona’s first team until they were 18.

Whilst Onana had turned 18 shortly after the investigation came to light, he realized that his chances of starting in goal for the Catalan side were slim. He departed for Ajax in July 2015, where he would spend his first season playing for Jong Ajax in the Eerste Divisie.

However, his fortunes took a turn for the better in the final weeks of the 2016 summer transfer window. Fed up with only playing cup matches, Barcelona’s second-choice goalkeeper Marc-André Ter Stegen gave the club an ultimatum: make me the starter or I leave. Not wanting to let go of their prized German goalkeeper, Barcelona sold the veteran Claudio Bravo to Manchester City, who had spent the last two seasons starting in La Liga under Luis Enrique.

To replace the departing Chilean, Barcelona signed Ajax’s starting goalkeeper Jasper Cillessen for an initial fee of €13 million. Bravo would begin the season as Pep Guardiola’s starter in goal before losing his place to Willy Caballero.

Cillessen traded a starting spot at Ajax for a bench role behind Ter Stegen in Barcelona. Onana immediately became the #1 goalkeeper in Amsterdam, where he has since developed into one of the best goalkeepers in Europe.

His debut for the first team came on August 20, 2016, in a 2-1 defeat to Willem II. Despite the loss, Onana proved to be a secure option between the sticks for Peter Bosz’s side, becoming a vital asset in a team that went nearly four months without losing a single match.

A month after debuting for Ajax’s first team, Onana made his debut in a 2-1 victory against Gabon. While he rejected a call-up to the African Cup of Nations (AFCON) in January 2017, with his cousin Fabrice Ondoa starting in goal instead, he has since logged 16 appearances for the Indomitable Lions, starting in goal for Cameroon during the 2019 AFCON.

Onana would go on to play a vital role in Ajax’s run to the 2017 Europa League Final, only to lose in Solna, Sweden to José Mourinho’s Manchester United. Bosz left at the end of the season to replace the departing Thomas Tuchel at Borussia Dortmund, but Onana remained first choice under both Marcel Keizer and Erik ten Hag, the latter of whom replaced Keizer on December 21, 2017.

Another trophy-less season followed for Ajax and Onana, but their fortunes would change in 2018/19. Backed by veteran arrivals Dušan Tadić and Daley Blind as well as a team that was beginning to dance to Ten Hag’s beat, Ajax won the Eredivisie title for the first time since 2014, whilst also hammering Willem II in the KNVB Cup Final. The cherry on top came in Europe: Ajax advanced past Juventus and Real Madrid before a heartbreaking loss in the Champions League semi-finals to Tottenham Hotspur.

Ajax’s performances took a step back with the departures of Matthijs de Ligt and Frenkie de Jong to Juventus and Barcelona, respectively, but not for a lack of trying on Onana’s part. The Cameroonian put in a number of world-class saves against Chelsea, Lille and Valencia, but it wasn’t enough for Ajax, who crashed out of their Champions League group, before losing to Getafe in the Europa League Round of 32.

Ten Hag’s side finished first in the truncated Eredivisie season, tied on points with AZ Alkmaar but ahead on goal differential. It seems a given that Onana will be playing Champions League football next season — the question is: where?

Shortly after the Eredivisie season came to an end, Onana said to AD Sportwereld, “It’s been five great years here. But now my time has come to take a step. I don’t know yet what will happen, but my ambitions and the agreements are clear.”

At 24 years old, Onana still has yet to enter his prime years as a goalkeeper, and with his contract expiring in 2022, Ajax will be forced to part ways with him within the next 12 months. Paris Saint-Germain and Barcelona have been rumored as potential suitors, but with Keylor Navas and Marc-André Ter Stegen impressing between the sticks, it’s unlikely either team would be willing to invest the reported €35 million that Ajax are demanding for him.

If and when Onana makes his move, he will not only become the most expensive black goalkeeper of all time, but the first black goalkeeper to start for a ‘European heavyweight,’ in many, many years. Outside of Marseille’s Steve Mandanda, who himself hasn’t started in the Champions League since 2013, there aren’t many black goalkeepers playing at the top level right now.

The most expensive black goalkeeper ever is Alban Lafont, who joined Fiorentina in 2018 for €7 million plus bonuses. However, after some high-profile gaffes, the Frenchman lost his place in the line-up to Bartłomiej Drągowski, who returned from his loan at Empoli. He returned to his home nation the following summer, joining Nantes on loan, who reserve the option to purchase him outright for €7 million.

Onana has spoken on several occasions about the difficulties that black goalkeepers face at the top level. In fact, he claimed in an interview with NCR that after the 2017 Europa League Final, he was negotiating a transfer with an unspecified Serie A club, but midway through the talks, his agent received a text message from the club’s CEO:

“We believe that Onana is a great goalkeeper but unfortunately we cannot sign him. A black goalkeeper would bring us a lot of problems in front of our fans.”

“Racism is there, I have to deal with it in almost every game away from home,” said Onana. “I’m black and African and I’m proud of it. If someone doesn’t like me because I’m black, there’s no problem.”

With just two years left on his contract, it appears only a matter of when, not if, Onana makes his big move. Chelsea manager Frank Lampard seems keen on offloading record signing Kepa Arrizabalaga, and along with Lille’s Mike Maignan, Burnley’s Nick Pope, Rennes’s Édouard Mendy, Onana has been linked as a potential reinforcement in the goalkeeper area.

Whilst other players in his position might be pushing for a transfer or vacationing in Mykonos, Onana has spent his holidays in Cameroon, delivering food and basic necessities to four different orphanages in the capital city of Yaoundé, whilst also helping to fund an electrical grid to provide renewable electricity to his mother’s hometown of Mengueme.

From helping to provide medical care to children in need to providing assistance to victims of terrorist attacks, the André Onana Foundation has sought to establish a better world for Cameroonians. You can read more about their efforts here: