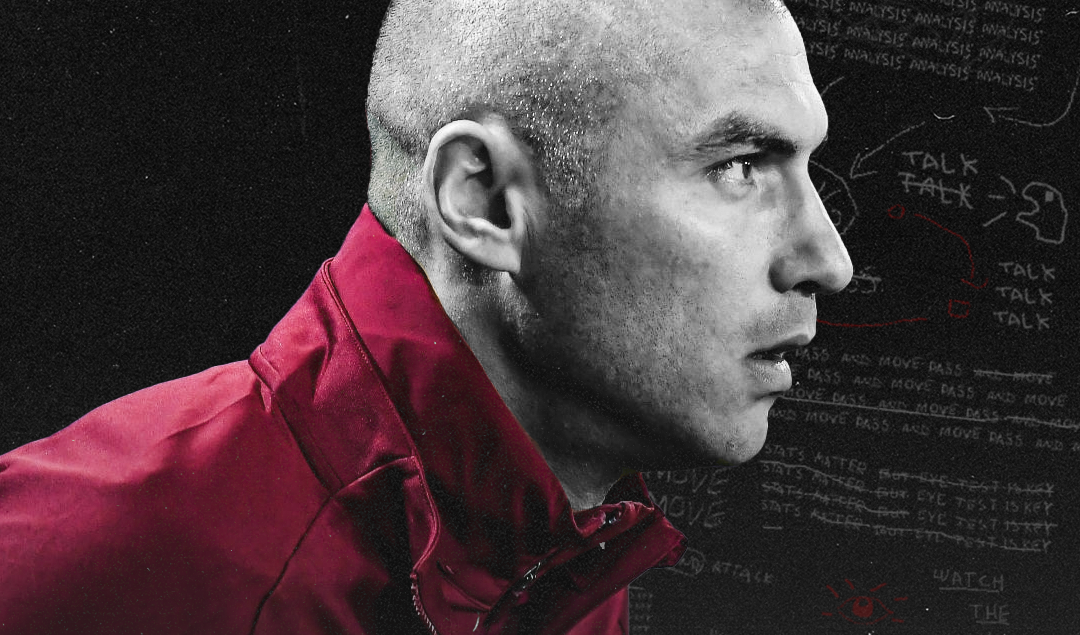 Today, footballers who spend their swansong in Turkey and China are seen to be slowing their career down, bracing for the impact of their decorated and storied careers are coming to an end. It is rare that a player lives that story in reverse. It is even rarer that anyone has the career of Burak Yılmaz. The man they call Kral (king, in Turkish), is playing out one of the most unique careers in recent football history and is the prime example of a ‘late footballing bloomer’.

Firstly, Burak was born into a footballing family. His father is Fikret Yılmaz, a former goalkeeper for Antalyaspor and former manager for clubs like Ankaragücü. Burak came through the Antalyaspor youth system, quickly making a name for himself. Yılmaz was given his debut at just 16 and gradually became a more integral part in Antalyaspor’s eventual promotion to the Süper Lig in 2005/06.

Aged 21, Burak was signed by Turkish giants and current champions, Besiktas. He was mainly played out wide as a winger and this didn’t get the best out of the young Yilmaz. His career started in drive, but quickly labored and eventually stalled. He had a short but relatively effective stint at Süper Lig side Maniaspor before another one of Turkey’s big three took a chance of him, as Fenerbahçe came calling.

At Fener, Yılmaz arrived and was under pressure almost instantly to adapt to a whole new spotlight. “Of course I’ve made mistakes but I think I will show myself as a new Burak here”. This was Burak’s statement as he signed for Fenerbahçe. He also reiterated his supposed readiness for his move to such as a big club. When asked about how he would cope on such a big stage at Fener, Yılmaz answered, “I am ready and I am in this war, of course, until the end.”

However, things did not go well for Yılmaz at Fenerbahçe. He only featured six times in his only season and didn’t score a single goal. He was loaned out the next season to Eskisehirspor for the beginning of the 2009/10 season, but Yılmaz returned in January and signed for Trabzonspor, in what can definitely be described as the crux of Kral’s career revival.

The Rise and Fall of Eskişehirspor

How Trabzonspor Sparked His Renaissance

An important fact to acknowledge is that Şenol Güneş’ involvement in Burak Yılmaz’s career taking off holds great significance. Güneş gave Yilmaz his first start at Trabzonspor in 2009/10 and played him out wide for the 14 games he played that season. The next season, Yılmaz played a huge role in Trabzonspor’s impressive 2010/11 season as they narrowly missed out on the Süper Lig title to Fenerbahçe in a season that was followed by years of trials over alleged match-fixing.

“At the end of the day it should be Güneş and nobody else”, said Yakup Marfoglu, Trabzonspor fans and podcaster for Football a la Turca, when asked about what made him so successful at Trabzonspor. “Our front three of Burak, Umut Bulut and Jaja have to carry a lot of the weight and Burak always thrives under pressure,” he said.

The 2010/11 season seen Yılmaz finish as Trabzonspor’s top goalscorer with 19 goals in 30 games. He turned his career around from being a young forward with plenty of potential to being one of Turkey’s best strikers in just one year. “Burak evolved his game to be more clinical in front of goal and was moved to the forward position after six months”, said Yakup. This progress was marked once again as Yılmaz scored his first international goal for Turkey, in the Euro 2012 qualifiers against Azerbaijan.

One year later, Burak had his best season yet. Many of the players that nearly achieved the 2010/11 title with Trabzonspor left the club as the team was split up. Burak, however, stayed for one more year with the whole expectation for goals put solely onto his shoulders. He delivered emphatically, scoring 33 goals in just 34 games. This was more than double the second-highest goalscorers that season and set a Trabzonspor club record for goals in a single season. He was certainly thriving under the weight of being one of the league’s best players that season.

Despite Yılmaz’s goals, Trabzonspor still finished 21 points behind Galatasaray in the 2011/12 season. This was a signal of what Yılmaz wanted in his career. He had already propelled his career forward to an exceptional standard in just two years under Şenol Güneş. However, domestic titles still eluded him and Galatasaray, at that time, practically guaranteed that. He joined Galatasaray in 2012, aged 27, becoming only the second player to play for Turkey’s big 4 clubs along with current Besiktas boss, Sergen Yalcin.

This would later become the decision that arguably rewarded his career the most. In 2012/13, Galatasaray won the title and Burak had his best goalscoring season with Aslanlar (The Lions). The season also produced some incredible moments in Europe too, with Burak scoring the winner at home to Manchester United in a game that granted Galatasaray qualification to the knockout stage in a famous 1-0 victory.

Burak’s time at Galatasaray rewarded him with two league titles in four years, plus two Turkish Cup’s in 2014 and 2015. It was a hugely rewarding time that may well come in handy in Burak’s current career chapter at Lille. The culture of success, the weight of expectation; it is all second nature to Kral.

A Moment of Clarity

After a hugely rewarding chapter of his career, Yılmaz ended his time at Galatasaray and jetted off to China to play for Beijing Guoan. At 31 years old this could’ve been interpreted as Burak’s ‘settling down’ period. Beijing Guoan disappointed as a club during Yilmaz’s time there. They had challenged for the Chinese Super League in the years before Burak’s arrival but in the two years he was there, they finished 5th and 9th.

He was always at the core of Beijing Guoan’s tactical system and his goalscoring record was still strong. However, he decided to part ways citing family reasons for his departure. Then aged 33, there had to have been a realization for Burak, that he still had plenty to give as a very capable striker in European football, and with not too much time left on his career clock, he returned to Trabzon.

“I don’t think anyone was too worried because his postioning has always been elite,” Yakup replied when asked what he expected when Burak retuned from China. “He might have slowed down but his timing is still really good, which will bring him one on one with keepers several times a game.”

When Burak returned to the Süper Lig, he was a more sharpened and refined striker. The finer details of his finishing ability, chance creation and off-the-ball work were filed down to the smoothest of edges. He only stayed at Trabzonspor for one full season and this was in part due to Trabzonspor’s financial situation and the turmoil that brought around behind the scenes.

Although he was happy about Burak’s return, Yakup expressed there was worry about the financial situation of the club combined with Yılmaz’s huge contract, in which he earned 3.55 million Euros plus 12.5k per point; “With how bad the financials of the club were at the time, this was not a smart choice at all,” he said.

After the 2017/18 season in which Burak scored 23 in 25 games but Trabzonspor missed out on European football, rumors of him moving away grew evermore. Halfway through 2018/19, he transferred to Besiktas and after an impressive season and a half for him individually, he embarked on the most adventurous chapter of his career, with a transfer to Lille.

As a 35-year-old, Yılmaz joined Lille in a move that came to the surprise of some people but this was, to Yilmaz, a chance to display his undisputed talent under a completely new spotlight. Under Christophe Galtier, Burak got the chance to play alongside his Turkish national teammates, Yazıcı and Zeki Celik. In addition to just playing for Turkey together, Yazıcı also played with Burak at Trabzonspor in Kral’s second spell.

Tactically, Lille are very intriguing. They have played a 4-4-2 all season long with the balance being the key word in their success. They have a great variety of youthful energy and impact with Jonathan David, Sven Botman, Jonathan Bamba and Boubakary Soumaré that can be balanced out by the intangible streetwise and experiential qualities brought to the table by the likes of José Fonte, Benjamin André and Burak Yılmaz.

Galtier’s side have overperformed their expected goals this season and are only the fourth most potent attack in the league. This is made up for by their exceptional defensive record and their almost mystical ability to pluck victories in games where they perhaps haven’t deserved to. To the outside, Lille can look like a team thrown together with journeymen, forgotten future stars and the new blood. Nevertheless, they are extremely well balanced as a side, they have a great blend of qualities and a strong mentality.

“You will see. We will be champions,” Burak said as his side exited the pitch against Saint-Étienne after a 0-0 draw. It appeared as if he was convincing himself as much as the cameras and the media. He is desperate to get Lille over the line after such an impressive season. Les Dogues enter the final matchday one point ahead of PSG, who will face off against relegation-threatened Brest, and only a win against Angers can seal the title for them.

His career has had more setbacks than the average one, being a throwaway earlier in his career, battled countless injuries, missed out on titles. Toppling PSG’s stranglehold on Ligue 1 would undoubtedly be the crowning achievement in the career of the man they call ‘Kral.’