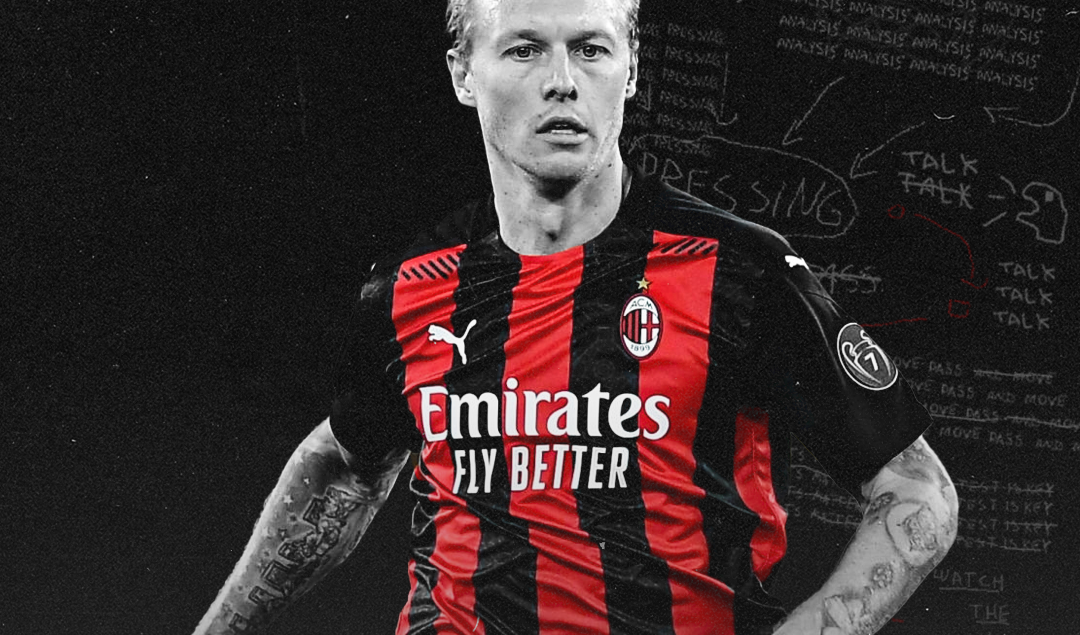 2020 was a year many would prefer to forget due to the COVID-19 pandemic that swept around the world. Football, like many other things in life, suffered because competitions had to come to a halt and people were limited in the movement outside of home. When Serie A resumed in June, AC Milan was one of the in-form teams in the competition, going unbeaten in 12 matches, collecting 30 out of a possible 36 points, and then securing a place in the Europa League for 2020/21.

While Swedish great Zlatan Ibrahimović has earned plaudits for his scoring ability up front, another experienced Scandinavian has been keeping things secure at the back. Danish center-back Simon Kjær arrived at the Rossoneri in January 2020 like the Swede and he has provided both composure and assure in defense. With four rounds remaining in the 2020/21 Serie A season, AC Milan is fighting for a spot in next season’s UEFA Champions League and Kjær’s tranquility is needed to give his much younger teammates valuable guidance.

The 32-year-old arrived on loan from Spanish club Sevilla after he struggled to perform during a loan spell at Atalanta in the first half of the 2019/20 campaign. He had difficulty adapting to the back three formation implemented by La Dea tactician Gian Piero Gasperini and he only played six competitive matches for the Bergamaschi.

Prior to his spells at Atalanta and AC Milan, Kjær had Serie A experiences with both Palermo and Roma. For the majority of the 2010s, he had played in a variety of major European leagues, but his time with Il Diavolo has illustrated that Italy is a footballing home for him. The Dane made his competitive debut for the Rossoneri in January 2020 in a 3-0 victory against SPAL in the Round of 16 of the Coppa Italia. He very quickly cemented the right center-back role usually occupied by Mateo Musacchio and displayed far superior defensive awareness.

While the Argentine may have possessed the ability to play the ball out from the back, opponents were often quick to expose his vulnerabilities in defense. Kjær’s experience and capabilities as a defender have given left center-back and Diavolo captain Alessio Romagnoli extra assurance in the backline. Under coach Stefano Pioli, AC Milan eventually developed a settled back four consisting of the central defensive duo of Kjær and Romagnoli while Davide Calabria and Theo Hernández would operate as the full-backs.

The Rossoneri finished the 2019/20 Serie A season in sixth place with 66 points and cemented a place in the Europa League qualifiers. Their Danish center-back had featured in 15 league matches and he was substituted only three times. Kjær played in AC Milan’s opening nine matches of the 2020/21 Italian league season before missing out on five matches due to a muscular injury. The first half of the season was great for Il Diavolo, going unbeaten in the opening 15 rounds and sitting on top of the table.

A 3-1 defeat to Juventus at home on January 6 broke the Rossoneri’s unbeaten streak but it was not enough to break their momentum, and another home defeat, this time to Atalanta, was not enough to prevent the Milanese side from being crowned the winter champions. While the preferred defense of Pioli was not always available, Kjær was still able to mentor the younger replacements coming in. Calabria and Romagnoli have suffered injuries during the season, resulting in the likes of Pierre Kalulu, Diogo Dalot, and Matteo Gabbia deputizing for them.

Although Gabbia showed glimpses of potential, there were matches in which he was exposed for his inexperience. In January, English center-back Fikayo Tomori arrived on loan from Chelsea, and he has been a more than adequate deputy for Romagnoli. Even when the Italian had difficulties after returning from injury, Tomori shone individually and was able to pair up well with Kjær in defense.

Unfortunately, the form of AC Milan has declined in the second half of the season. Although there has been a combination of factors for this drop in momentum, the Danish veteran has been doing what he can to keep things tight at the back. Kjær has played 24 Serie A matches so far during the 2020/21 season and he also provided two unlikely assists in a 3-2 victory away to Fiorentina.

He averages 1.5 tackles per game, 1.5 interceptions, 4.3 clearances, and 0.9 blocks. Arguably the most memorable of those blocks was in the 2-1 victory against Genoa, when he blocked an effort from Andrea Masiello and Tomori then cleared the rebound from Valon Behrami. The 32-year-old also averages 52.9 passes per game and has a passing efficiency rate of 87.5 percent. The Dane is not the type of player to constantly kick the ball away in the hope it goes somewhere safe and he can keep it simple in his distribution from the back.

With the assurance that Kjær gives in the Milan rearguard, Musacchio found himself out of place at Milanello and he was sent on loan to Lazio in January. At international level, the veteran defender is still an omnipresent figure for Denmark, having won 105 caps for his country so far and he also wears the captain’s armband.

There is a mathematical chance that AC Milan might miss out on the Champions League, a competition that it has won seven times and has not participated in since 2013/14, and it would be disappointing for their supporters if they do not make a return after such a promising start to the season. If they do secure qualification for Europe’s premier competition, the ice cool defending of Kjær would have played a fundamental part in that.