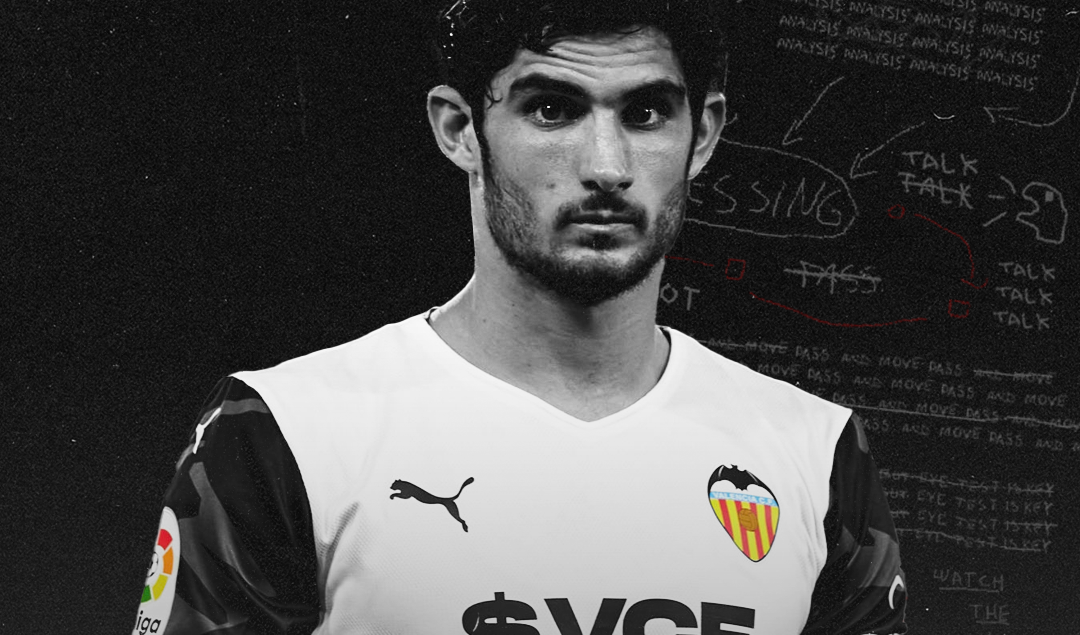 There were wild celebrations in Valencia when a picture appeared on Twitter showing Peter Lim with Gonçalo Guedes in the summer of 2018. This picture was significant because it indicated that Valencia were almost certainly signing him on a permanent deal, as rumours of the imminent deal dominated the airwaves.

During the rocky reign of Lim and his Meriton in Valencia, since 2014, this was perhaps one of the very few moments when their actions led to positive reactions from the Valencia fanbase. For the first time since 2006 when they signed Joaquin, Valencia were spending good money on a player many had earmarked for superstardom, a player preparing to enter a great prime. They were smashing their transfer record in the process. If the 17/18 he spent on loan at Valencia was anything to go by, then Valencia had a gem on their hands.

For a club that had become a selling club, buying cheap and selling for more, this was significant. It did not feel like a signing that was for short-term profit. Lim had personally intervened to get the transfer over the line, as PSG sought to move him to other clubs who were rumoured to be offering more. Guedes, on his part, had reportedly stated that he only wanted Valencia.

Valencia’s Familiar Turmoil Might Be One Too Many This Time

When the deal was confirmed, the fans were rapturous in their approval, with many showing up at the airport to welcome him enthusiastically. He was coming home again. The club’s majority shareholder had made sure the deal happened, the fans were celebrating his imminent arrival, the player was coming to the only club he reportedly wanted to be in. What could possibly go wrong?

Everything. Then again, that is what many have come to expect with Valencia these days. The past decade has been one of false dawns and failed promises, of unrealised potential and what-could-have-beens, of dashed hopes and steep drops from highs. Guedes not living up to the hype was probably expected by even the most optimistic of fans, but they hoped still.

Not even his disappointing World Cup performances in 2018 could keep fans from hoping. After all, that was explainable. He went to the World Cup while out of form, failing to recover it following injuries in the latter part of the 17/18 season. That poor form continued into the 2018/2019 season as the entire Valencia team struggled and manager Marcelino came under immense pressure.

Guedes was showing flashes of his ability but things just refused to come off for him in the final third. He could be forgiven for it though since every other attacking player was simultaneously misfiring, although the reason he was so sought after was the fact he was such a difference-maker when others were having a bad day.

Early in October, during the game against Barcelona, Guedes got injured. It was a game in which he had ironically started on fire, but he lasted only 12 minutes. When he returned a month later, in November, he looked like a man finally ready to elevate Valencia, as was expected of him. The end product still hadn’t been sorted but he was playing so much better, breathing life into Valencia’s attack and running things.

But that only lasted for a few games before the poor performances showed up again. Not long after, in early December, he got injured and was out for the next two months, until February. That meant he missed a combined three months of action before February, and missed 15 games in total. It was a huge blow that almost ruined his first season.

Fortunately, Guedes came back in time for Valencia’s late-season resurgence and played a vital role in the club’s centenary year. Again, it took him a while to find his rhythm but when it did come, it was fantastic. Away at Girona, Guedes scored his first goal of the season while delivering a memorable performance. In the next game, a Europa League second leg game at Krasnodar, he scored a goal at the death to save Valencia from elimination, sending them through to the next round.

Then came a home game against Getafe. He had a goal disallowed and the game ended goalless, but he was by far the best player on the pitch. It was exactly the type of performance he had been signed for, the type that had made fans celebrate his permanent signing.

He picked up from where he left off after the international break – an average performance in a game versus Sevilla aside – scoring against Real Madrid then delivering a wonderful 30-minute cameo in Vallecano. A brace at Villarreal in the Europa League was next, then a goal plus assist performance against Getafe, an assist against Villarreal and a crazy brace at Betis – where he scored two shots from outside the box.

This brief period of great form helped to salvage Valencia’s season as they ended up sneaking into fourth place ahead of Getafe and winning the Copa Del Rey against Barcelona. It is worth noting that Guedes had still not had a preseason at Valencia, in 2 seasons, by this point. This was the perfect prelude to a 2019/2020 season that promised so much for Guedes and Valencia.

Unfortunately, the season descended into turmoil as Marcelino got fired early, players revolted and all hell broke loose. The on-pitch performances of the entire team suffered, and by October yet again, Guedes got injured. This time, he was out until February.

After four months out, he returned and tried to get into rhythm before the COVID-19 pandemic hit and halted all football activities. The return to football three months after that was predictably forgettable for everyone, but Guedes still managed to score a stupendous goal against Osasuna which has now gone viral.

The 2020/2021 season brought more “Valencianic” problems; a manager who wanted to leave after transfer promises were broken but couldn’t, a depleted team that lost half its first XI for peanuts, a relegation battle for the most part and unhappy players. Since the end of January 2021 though, Guedes has not cared about all that.

Every week since then, he has shown up with fire in his belly, even when his teammates haven’t been up to par. It has been a great year for him, and perhaps the first time since that loan season in 17/18 when Guedes has consistently delivered high-level performances for months. It is also the first time in his 4-year Valencia career in which he has not been halted for months by injuries.

That surely is not a coincidence. Another positive is that he finally has a manager who can set up a team to be optimal, someone who is tactically sound and competent enough for the job at hand. He has not had that since Marcelino, who is the manager under whom Guedes’ potential has been most obvious. Now, he has the freedom to express himself without any of the constraints that have held him back and made him stagnant over the years.

Guedes has started the current season like a rocket, flying past everything in his way. He is playing in his best role – a free role behind the striker – and is becoming increasingly influential in Valencia’s games. Other fantastic aspects of his game, which have been underrated for far too long, are finally on show such as his vision and ability to play fantastic through balls.

Whisper it but this may actually be the season in which Guedes delivers consistently while putting up world-class numbers. He is already one of the league’s star attractions, a delightful player to watch. Will we finally get to see Guedes fulfilling his potential after 3 years of false dawns? I think so. If injuries do not pop up and halt him again, we are all in for a treat.