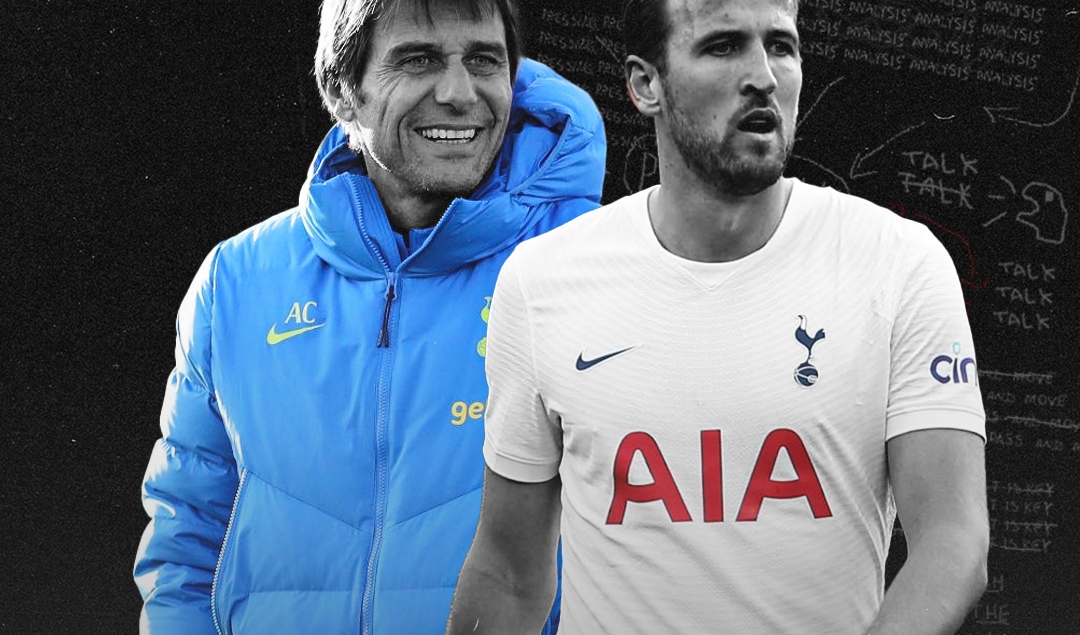 Every cloud has a silver lining. After their 3-0 humbling to Manchester United, Spurs’ silver lining revealed itself on Tuesday morning, with the announcement Antonio Conte would be replacing Nuno Espirito Santos as the club’s manager. Conte is viewed as a serial winner from his time at Juventus, Chelsea and Inter. But can he transform a disjointed Tottenham side, and if so what changes will the Italian make?

The main disgruntlement from Spurs fans has been in the way that Nuno’s side have passively attacked. After all they are only 5 points off the top four, so it isn’t necessarily a results-based issue. The figures behind the North London club’s performances make for much grimmer readings. Spurs are 18th for xG per 90 – only Norwich and Newcastle have amassed a lower total than their 1.03.

They also come 19th for shots taken. In attack they are evidently uninspiring and lethargic, coming 17th for touches in the opponent’s penalty area. Unlike Nuno’s Wolves, Spurs have failed to build much solidity at the back. They are conceding 1.3 xG per 90, a figure that is not porous, but one that could certainly be improved upon. So, is Conte capable of changing these numbers?

His Chelsea team typified the ruthless efficiency that the Italian craves, albeit with better tools than those that he has taken on in North London. In his first season with the club, Chelsea scored the 2nd most goals in the league, despite only having the 5th most shots. They also conceded the 3rd least shots and goals.

Conte will look to make Spurs much more efficient in the final third, whilst they may not pepper the opponent’s goal, the Italian will look to get his side in good goal scoring positions from which Son and Kane can capitalise. Defensively, the out of possession back 5 will certainly pose a more resolute backline, as the Italian looks to move the club away from the lethargy seen under Nuno.

‘I prefer to kill him and have 22 players’. That was Conte’s response when asked what happens if a player’s attitude is not up to standard. “I always talk about education and respect. I demand this. I give this. But I demand this.”

Not all players are made for it. At Juventus, Felipe Melo departed the club days after Conte’s arrival. Even Inter’s club captain and talisman, Mauro Icardi learned the hard way that the Italian takes no prisoners, as he was shipped off to PSG.

It’s not just players that Conte demands everything from. He’s also got a history of falling out with the club hierarchy in his previous managerial roles. Only months ago, he left Inter due to the club’s financial troubles and the sale of star striker, Romelu Lukaku. Similarly, Conte left Juventus after the club failed to secure his primary target, Juan Cuadrado.

With Daniel Levy seen as an astringent and domineering figure at Tottenham, it’s surprising that he has opted for a manager, as visceral as Conte. Either Levy will have to comply with the Italian’s demands or Conte’s tenure will be a similar length to Nuno’s.

On the pitch Conte’s style has now become synonymous with 3 at the back. In Italy, he has typically favoured the 3-5-2, central to this system are the two strikers working in tandem at the top of the pitch. At Juventus it was Fernando Llorente and Carlos Tevez, at Inter, Lautauro Martinez and Romelu Lukaku. However, at Chelsea, Conte adopted the 3-4-3. Whatever the case at Tottenham, it’s highly likely that the Italian will resort to a back three again.

A Conte team will be primarily focused on defensive security. But, offensively his teams can be as expressive as any. His Inter team contained: Ivan Perisic, Achraf Hakimi, Nicolo Barella, Christian Eriksen, Romelu Lukaku and Lautauro Martinez all at once on occasion.

When the opposition is in possession, he will usually hold a deep defensive line in a 5-3-2. Against weaker teams, expect the wing-backs to push up against the opposition full-backs to create a 3-3-4 without the ball. It goes without saying that dynamic wing-backs are crucial to how Conte wants to set up his team. Defensively, they need to be solid and able to quickly set back into a 5.

Energy is paramount, both to press the opposition and create attacking overlaps. Usually, the wing-backs are heavily involved in the attacking output. Marcos Alonso and Victor Moses were responsible for 20% of Chelsea’s goal contributions in the 2016/17 season.

Conte requires midfielders that are good on the ball, allowing them to quickly punch the ball through the lines to create attacking overloads. This is also aided by a ball-playing centre back, to allow Conte’s team to create neat passing patterns, designed to help attract opponents onto Inter. His players were then taught to play through the pressure, which then created space for Inter’s forwards and Hakimi out wide.

In this manner, Conte’s side could adopt a quasi-counter attacking style of play, even from their own goal kick. In fact, although it is not the only string to the Italian’s bow, Conte teams tend to thrive in transition. No team scored more goals than Inter on the counter-attack in the 2020/21 season.

With all this in mind, how will Spurs potentially line up under the Italian? What players will thrive, and who will become redundant. Conte will either use a 3-5-2 or 3-4-3. Considering the telepathy between Son and Kane last season, as well as the speed of the Korean, it’s likely that Spurs’ new manager will favour a front two. Another sure starter will be Hugo Lloris in goal, who has performed better than most of his teammates so far this campaign.

Cristian Romero should occupy the central centre-back position, considering his confidence on the ball, and ability to aggressively engage with the opposition forwards. Pierre Emile Hojbjerg’s defensive instincts mean that he will sit as the deepest central midfielder, tasked with covering for the wing-backs.

Tanguy Ndombele should also benefit from the compact nature of Conte’s midfield 3, in covering for his defensive flaws. Plus, his effervescence on the ball will be crucial for Spurs, if they want to transition up the pitch quickly.

Sergio Reguilon’s energetic style of play makes him a ready-made fit at left wing-back. At right wing-back, the jury is still out. Perhaps Conte can get a tune out of outcast Matt Doherty who excelled further up the pitch during his time at Wolves. Emerson Royal has plenty of endeavour to get up and down the flank, but he currently looks cumbersome on the ball.

Ben Davies could benefit from Conte’s preference for a left-footer at left centre-back, with the Welshman’s competence in the air also adding to his appeal. In truth, there are various positions up for grabs, and plenty of players at Tottenham out of favour. However, if they can buy into Conte’s intense system of management then don’t be surprised by revivals.

Andrea Rannochia and Alexis Sanchez experienced upturns in form at Inter. Similarly, Marcos Alonso and Victor Moses suddenly became key cogs to Chelsea’s team, when the Italian was at the helm in West London. With the January transfer window around the corner, Conte is expected to be typically bullish in seeking his demands. Certainly, there are still plenty of expensive holes to fill if Tottenham are to get to the squad that the Italian wants.