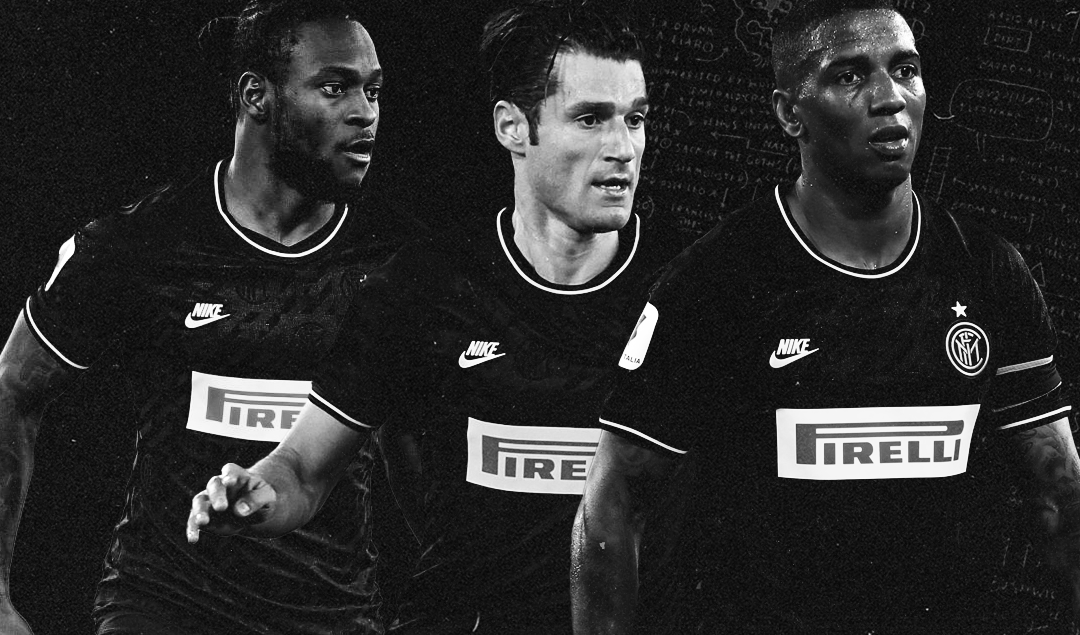 Inter Milan under Antonio Conte are renowned for their intricate automatisms during build-up which help them create space, bypass pressure and consolidate possession.

The central compactness provided by their shape allows for numerical superiorities to be easily achieved, thus providing more short passing options which in turn create space for the wingbacks, as Inter are often seamlessly able to evade pressure in their own 3rd centrally.

However, because their wing backs lack dynamism and creativity, they are unable to fully capitalise on their ability to create artificial counter-attacking conditions through playing out of defence. Thus, Inter’s ability to play out of defence is limited by the wing backs as they struggle to capitalise upon the advantages achieved. 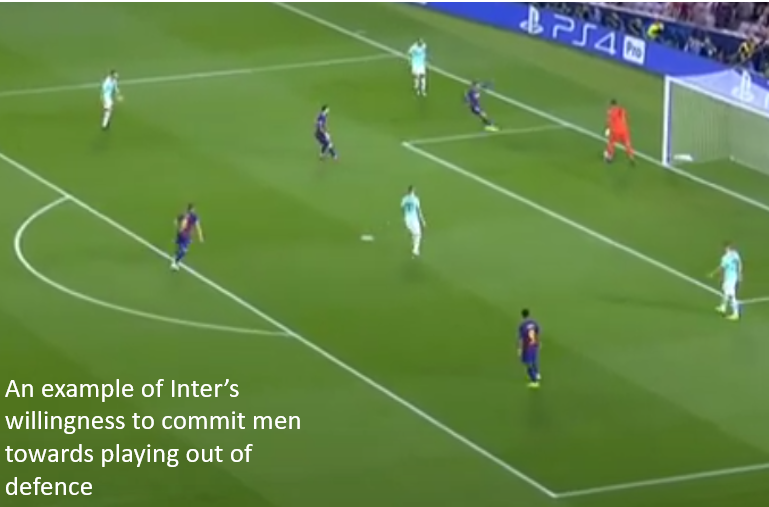 When playing against a 3-5-2, the opponent will defend narrowly, as a reaction to Inter’s central compactness. It should be noted that the wide midfielders and centre backs in the 3-5-2 often occupy the half spaces and frequently attempt to overload wide areas and create space through rotations with each other.

However, this is not always possible when attempting to build short, as the central players are required to help alleviate pressure, causing them to be closer to the ball as they attempt to create short passing options. As a result, the wing back becomes too quickly confined to benefit from potential support when he has received possession.

Thus, Inter’s combination play between wing back and wide central midfielders/forwards serves more as an option for vertical attacks where less of a commitment is required to play through pressure because the consequences for losing possession is lower. Consequently, being capable of progressing possession through dynamic running and dribbling is crucial to a wing back’s success, and it’s something that Inter has lacked this season.

Both Antonio Candreva and Ashley Young have solid deliveries in the final 3rd which is an extremely valuable asset to have when coming up against deep defences. Transforming wide creation into a strength rather than something desirable for opponents opens more avenues for attack depending on how the opponent reacts.

If a team’s greatest strength is their chance creation through crossing, defending narrowly becomes a less attractive option as it allows for sustained crossing by leaving space open in wide areas. Thus, more impetus must be put on preventing crosses from occurring, forcing the opponents to defend wider, thus opening more space centrally.

In many ways, this method of chance creation is analogous to Liverpool. To prevent Mohamed Salah and Sadio Mané from being fully effective, you have to defend narrowly, thereby opening space for Trent Alexander-Arnold and Andrew Robertson to capitalise upon. In essence, having a potent threat from players that consistently stretch the pitch creates a difficult to solve conundrum for the opposition in their final 3rd. 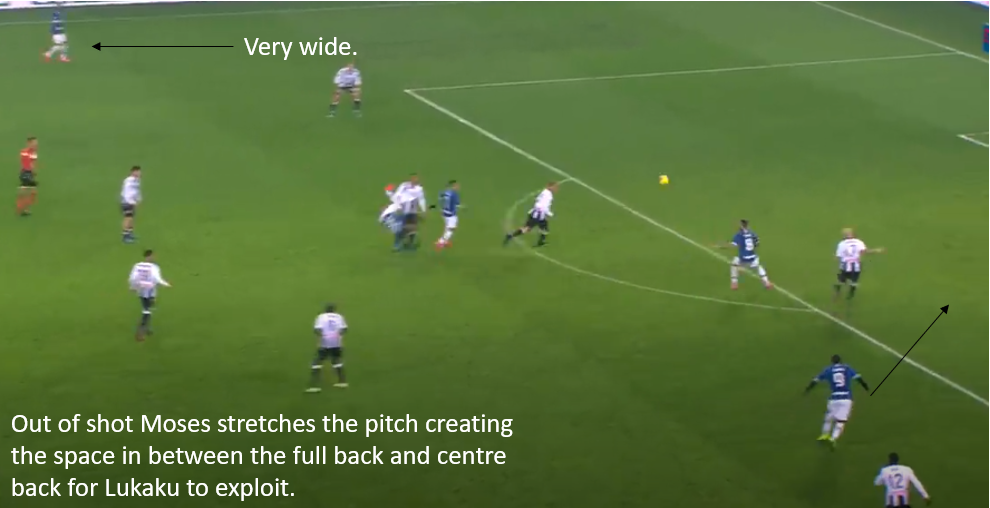 Hence, the rationale behind playing Young and Candreva is clear: make the option of sustained crossing a reliable way of winning matches and creating chances; transforming an often undesirable and desperate state into an advantageous one.

This provides a win/win situation: either the opponent ‘allows’ (they will engage to prevent crossing attempts, but their approach will be predicated on defending crucial central space) such a state which will likely result in Inter winning the battle of attrition, or they “adapt” which creates more space centrally and in between the lines for the midfielders and forwards to take advantage of.

Having two dangerous wingbacks in a 3-5-2 allows teams to consistently stretch the pitch and change the opponents’ style of defending. This creates confusion defensively and causes the opponent to loses control of the situation as the constant stretching of the pitch the opponent combined with the high central presence forces the opponent to adapt quickly when a player, typically Marcelo Brozović in Inter, switches play.

In doing so, the team disorganizes the opponents who are adjusting their positioning and creates space for quick crosses. If an opponent attempts to restrict space out wide on one flank, they open up space on the other flank, which Inter can then exploit thanks to Brozović’s deep positioning and pinpoint passing. Teams who use 3-5-2 can take advantage of opponents who operate in low blocks by pinning them back even deeper and opening up gaps in the defense.

However, for this strategy to be effective, Inter must be able to consistently consolidate possession the opponent’s final third, which they have often struggled to do against the best teams in Serie A. Inter’s record against top sides this season has been underwhelming, losing both games to Juventus, once to Lazio (when Lazio were in poor form) as well as drawing against Atalanta and Roma.

Lacking dynamism at wingback means they are unable to capitalise on space created through playing out of defence effectively, and thus struggle to progress possession through the wings. While mid-table opposition such as Udinese and Torino will freely cede territory and attempt to play on the break, allowing Inter to consolidate possession in advanced areas, bigger teams such as Lazio seldom park the bus, making Inter’s struggles to capitalise on space in deep areas all the more damaging.

When the opponent is defending in a high but centrally compact manner, Inter struggle as their wing backs lack either the ability or inclination to exploit wide spaces, which in turn forces possession backwards as the opposition can close down the space before territory is gained.

As a result, Inter become more reliant on direct balls to the two forwards for ball progression and space exploitation, a far riskier approach which heightens the chance of turning over possession.

The same isolation that enables them to receive possession and allows the midfield to overload central areas in the opponent’s final third thereby becomes a negative when they are unable to progress individually. Neither Antonio Candreva, Ashley Young, Danilo D’Ambrosio, Cristiano Biraghi nor Kwadwo Asamoah are recognised for their individual ball progression abilities such as dribbling, quick passing, or speed.

This lack of athleticism also costs Inter defensively. Their wingbacks will mostly play high up the pitch in order to exploit spaces and support the counter-press when they lose the ball, and as a result, they’ll struggle to recover defensively when their opponent either bypasses the pressure or wins back possession.

This problem is mitigated in a back three as Inter’s players are usually able to cover space in the center of the pitch, allowing their center backs to close down or tightly mark opposition forwards on the counter. However, it still forces the center backs out of position and into 1v1 duels against attackers, thus disorganizing the defense’s structure.

Stefan de Vrij has thrived using this method of defending, with it suiting his aggressive play style and ball-winning abilities. Conversely, Milan Škriniar has struggled with this system of defending, performing to a lesser standard in comparison to previous seasons when he played in a back four under Luciano Spalletti. The aggressive style oriented around winning duels rather than protecting space does not suit him and has seen the Slovak struggle to replicate his lofty standards this season.

Having more athletic wing backs would not negate this problem entirely, but it would lessen it as centre backs would receive reinforcements with greater speed, which would in turn allow them to defend differently under the pretence of support in numerically disadvantageous positions.

A solution adopted by Conte has been to reign in the wing backs and adopt a more defensive approach in bigger games in order to protect his center backs. However, this places a lot of the attacking burden on the shoulders of Lautaro Martínez and Romelu Lukaku, forcing them to receive vertical balls and when countering as the primary method of attack which they have admittedly excelled at this season. Thus, the wing backs defensive deficiencies make it difficult for Inter to dominate possession in bigger games and sustain pressure as their lack of recovery exposes their centre backs to uncomfortable situations.

In summary, lacking dynamic wing backs is detrimental to Inter for 3 reasons. 1) Counter attacks are less effective as they struggle to progress through the flanks and capitalize on space vacated by bypassing pressure. 2) It limits tactical flexibility as Inter can only consolidate possession in the final third against smaller teams. 3) They are left defensively exposed due to the requirements for the wing backs to be high in attack and support the counter-press.

Despite signing four wing backs this season, Inter must invest in more physical players to occupy the roles, even if Young and Candreva provide requisite quality in the final 3rd. Movement in this regard seems to have already begun, as Inter are reportedly close to signing Achraf Hakimi from Real Madrid for €40 million plus €5 million in bonuses.

This signing makes perfect sense as Hakimi has already succeeded hugely in Lucien Favre’s 3-4-2-1 at Borussia Dortmund, another team known for creating ample space for the wing backs and relying on them heavily creatively and for progression of play. As well as ameliorating progression and defensive recovery problems, Hakimi provides much of the same quality as Candreva in the final 3rd, scoring five and assisting 10 goals in the Bundesliga this season.

The interest in signing Hakimi is a clear indication of Inter identifying the Achilles heel of Antonio Conte’s system, and it will serve them well next season as they look to challenge for the Scudetto and improve upon last year’s Champions League performance.